Arduino and Booleans: The truth is greater than zero! 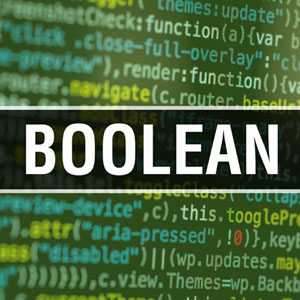 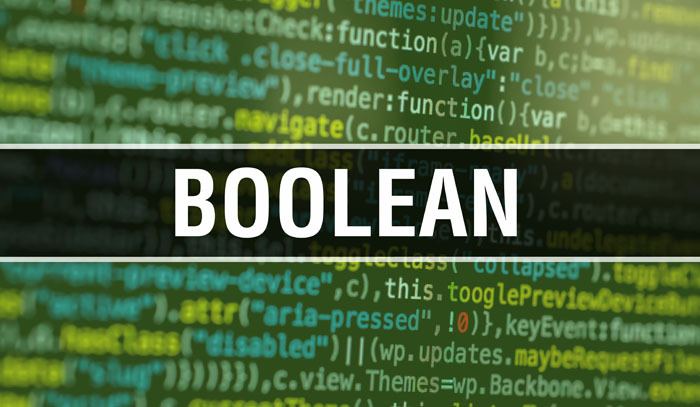 Binary and boolean sometimes seem like buzzwords, particularly “binary,” but that’s just because people become so fond of this mode of thinking once they get into it. Hint: They’re the cool geeks with Ferraris.

At the heart of things, binary is a machine thing, and if you want to control machines, especially microcontrollers, then you have to dig into binary once in a while. Especially the Arduino Uno (atmega328p), which has only 2KB SRAM. It’s a lean system that requires you to be clever if you want it to run large programs. Storing large arrays in PROGMEM and EEPROM (flash) will only get you so far.

The question, “why not just use the decimal system?” is very relevant, and must first be answered. You’ll learn to love boolean logic more once you understand why the binary system was designed in the first place.

Consider a transistor, which may be either “ON” or “OFF” at any given time. That transistor can describe two values (2**1). However, what if you want to count a bit higher? Add another transistor, and you can count to 4 (2**2), three (2**3) let you count to 8, and so forth. For your learning pleasure, pop open a python shell, and copy-paste the following to see the possible states up to 8 bits / 1 byte:

It’s impossible to count 65,535 Pokemons (including the starting score of 0) using only 16 fingers and toes, using only the decimal system. But, with binary, we can!

If it seems obscure, don’t be annoyed. Think of each binary digit as a transistor: 1 is “ON” and if 0 is “OFF.” To describe the number 255 using the decimal system would require 256 transistors (including 0), whereas with the binary system, we can describe 256 states with just eight transistors. It’s “0b11111111,” eight bits to one byte. It saved a lot of space in the early computer labs, where transistors weren’t tiny or effective (have you ever seen a vacuum tube?).

This is how our tablets and smartphones counted the number of Pokemons we caught when playing Pokémon Go. There’s no upper limit except memory.

When using Arduino, we have the “byte” data type (really uint_8t) to tell the compiler that we want a value in the range 0-255. However, boolean variables are much easier! Boolean variables can be represented with just one transistor, where true equals “ON,” and false equals “OFF.” You might have a tiny little state machine to determine if your motor is running, and declare it globally, before the setup() function:

When the motor is turned on, you’ll want to update that, with

You can use this to control the behavior of your system, if, for instance, your Arduino shouldn’t do anything else while the motor is running.

You’ve probably noticed the “!,” which is the logical negation operator. It means “NOT” in human-speak. The relational operators available in Arduino C++ are “==,” “!=,” “>=,” “<=,” “>,” but today is all about the boolean logic. Concerning ourselves with the relationship between variables isn’t relevant (such as determining if one value is greater than another), since the logical operators “!,” logical negation, “&&,” logical AND, and “||,” logical OR are more than enough to create AWESOME complex expressions. Though sometimes called binary operators, let’s not stray from the path.

If you’re feeling up to it, have a look at more advanced logic.

Following the binary bits above, let’s use the logical operators in a practical manner. We do use the Arduino IDE, see this for a quick introduction.

Hit CTRL+SHIFT+M to pop open the serial monitor, and input a 4-bit value, delimited by space. Something like “1 0 1 0” will do nicely. Then, press “Send.” You’ll see output like the following:

If you’re the lucky one, favored by the rising sun:

This Arduino sketch demonstrates many uses of boolean logic. Wherever the truth must be found, or its opposite, we’re using boolean logic.

The example in 2.1 is a toy, created only to demonstrate logical operators. This, however, is a useful state-tracking relay module, for you to modify and tinker with. Copy the code into a new sketch in your Arduino IDE, and upload it with CTRL+U. Then, view the serial monitor with CTRL+SHIFT+M (or “python3 -m serial.tools.miniterm” on Linux/MacOS, TeraTerm/Putty on Windows). If you input “0” and send it, you can view current relay states, either “ON” or “OFF.”

It’s not necessary to have anything except an Arduino to use the program. Play before you make! 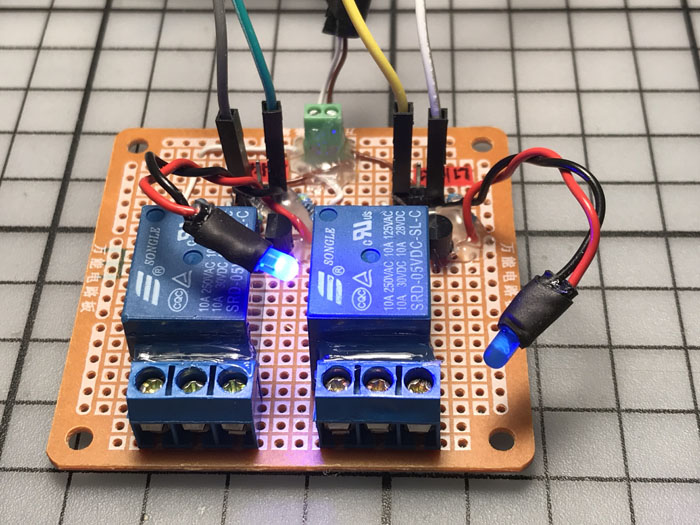 The code below is written specifically to make you comfortable with using booleans in Arduino IDE.

On the hardware side of things, I’ve never trusted those blue 5V relays for heavy loads, but they’re confirmed good up to ~200W. Enjoy your making!

Connect everything as shown in the diagram below; first on breadboard, then on protoboard. That’s how we do it. 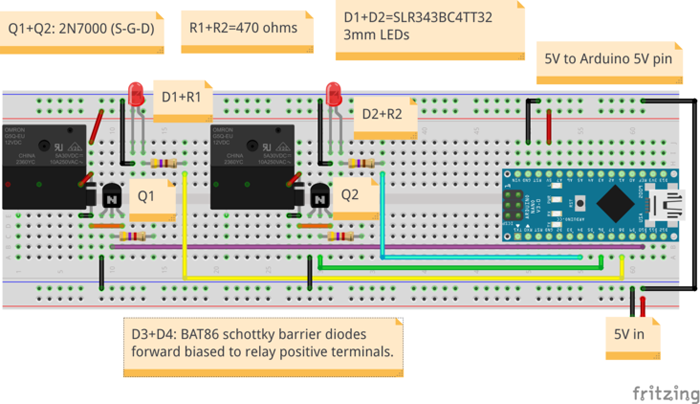 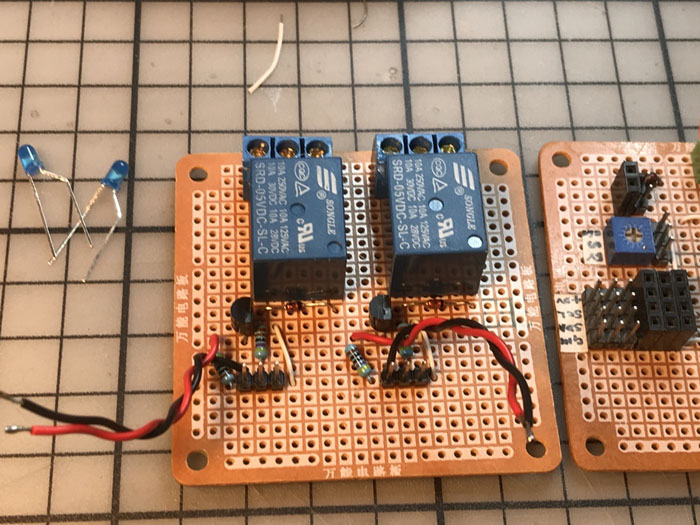 The only gotcha is getting the BAT86 schottky diodes right. You must have the cathodes (black ring on BAT86, usually a white ring) facing the positive terminals on the relays (the right side in the image above), or there will be problems (short circuit). The ring marks the cathode (k); make sure it’s lined up to the positive terminals! See this picture, zoom in on the blue relays: 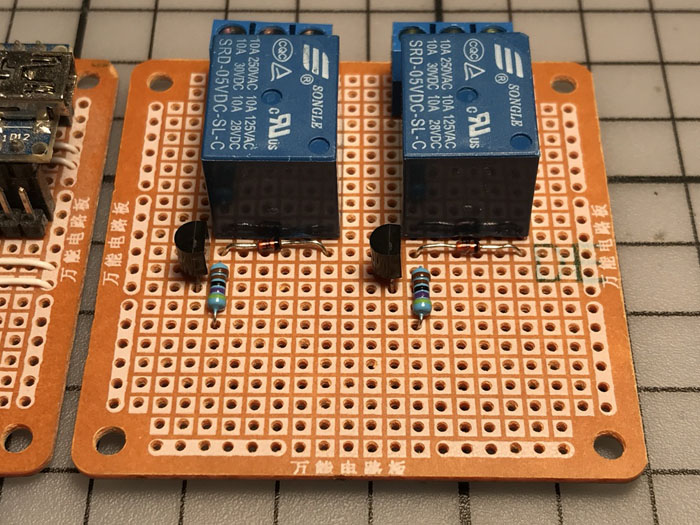 Here’s a picture of the assembled build. The extra things on the protoboard with the Arduino Nano aren’t in the scope of this article, and are also wildly uninteresting. 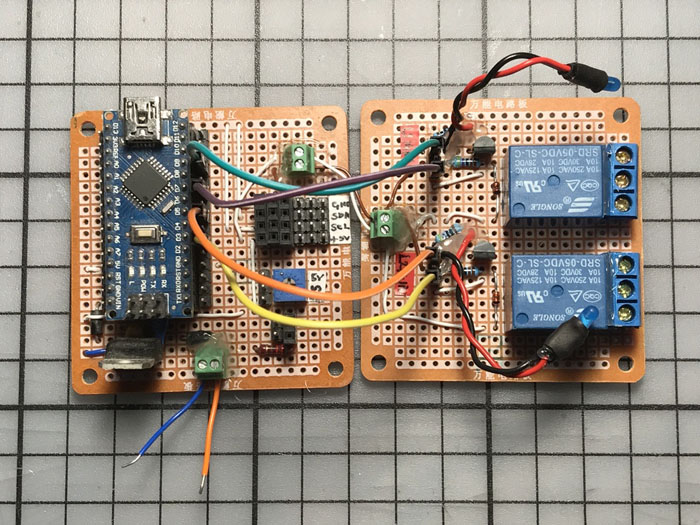 You can view the code below:

Now, we have state tracking, i.e., we can view current relay states, and can flip relays at will. We’ve covered compound expressions with logical operators, and you can use this code as a template for future projects.

Greenhouse hydroponics controller with RTC, HIGHLY OPTIMIZED indoor temperature controller with DHT22, and DS18B20 arrays on wireless sensors, or even driving an HVAC smartly: You define the behavior of your tech!