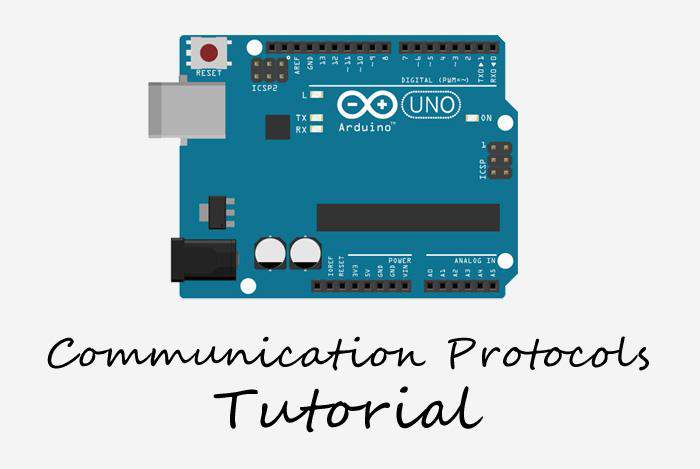 Inter-device communication occurs over digital signals.  Before we discuss communication protocols, we’ll first discuss how these signals are transmitted.

In a digital signal, data is transferred as a sequence of high to low and low to high switchings that occur very rapidly.  These highs and lows in a digital signal represent 1s and 0s respectively that, when put together in sequence, carry information that can be interpreted by microcontrollers.  Ever heard of bits and bytes?  Individually, these 1s and 0s are bits, and when they are in groups of 8, they are called bytes!

As it turns out, this sequence of eight represents a number the same way a number like 597 represents five hundred ninety-seven.  Each of the digits occupies a place-value, and the 1 or 0 in that place-value indicates how many times the place-value is counted.

As you can imagine, you can have number systems based on any number!  Some common ones in math are base 2, base 8, base 10, and base 16.  Mathematicians give these common number systems names for simplicity—base 2 is binary, base 8 is octal, base 10 is decimal, and base 16 is hexadecimal.  Each number system follows the same principal: each digit represents a number of times a power of that base is counted, and the value of each digit can only be between 0 and base-1 inclusive.

Knowledge of converting between bases is also useful because representing numbers in binary often makes for some cool math tricks as well.  For the purposes of this tutorial, however, we’ll leave it at just that.  Check out the appendix to this tutorial below for articles on these tricks!

The electrical engineering community decided to standardize electronics around three communication protocols to ensure device compatibility.  Centering devices around a few protocols meant that designers would be able to interact with any device by knowing a few basic concepts about each communication protocols.  These three protocols, UART, SPI, and I2C, differ in their implementation, but ultimately serve the same purpose: transferring data at high speeds to any compatible device. 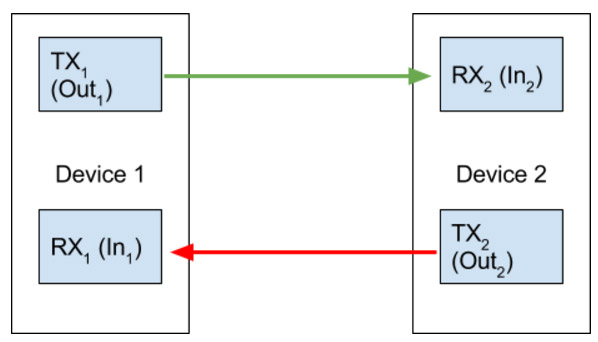 The term UART actually refers to the onboard hardware that manages the packaging and translation of serial data.  For a device to be able to communicate via the UART protocol, it must have this hardware!  On the Arduino Uno, there is one serial port dedicated for communication with the computer the Arduino is connected to.  That’s right!  USB, which stands for Universal Serial Bus, is a serial port!  On the Arduino Uno, this USB connection is broken out through onboard hardware into two digital pins, GPIO 0 and GPIO 1, which can be used in projects that involve serial communication with electronics other than the computer. 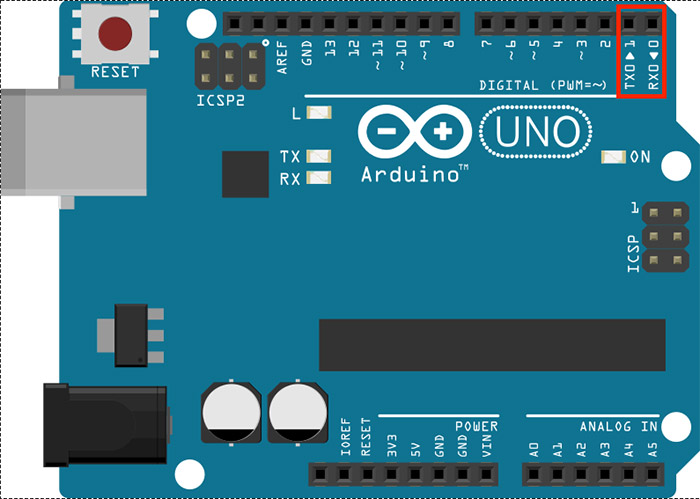 Figure 2. GPIO 0 and GPIO 1 are Serial RX and TX.  Any GPIO pin can be used as Serial RX or TX with the SoftwareSerial library

You can also use the SoftwareSerial Arduino library (SoftwareSerial.h) to use other GPIO pins as Serial RX and TX lines.

UART is called asynchronous because the communication does not depend on a synchronized clock signal between the two devices attempting to communicate with each other.  Because the communication speed is not defined via this steady signal, the “sender” device cannot be certain that the “receiver” obtains the correct data.  Therefore, the devices break data into fixed-size chunks to ensure that the data received is the same as the data that was sent. 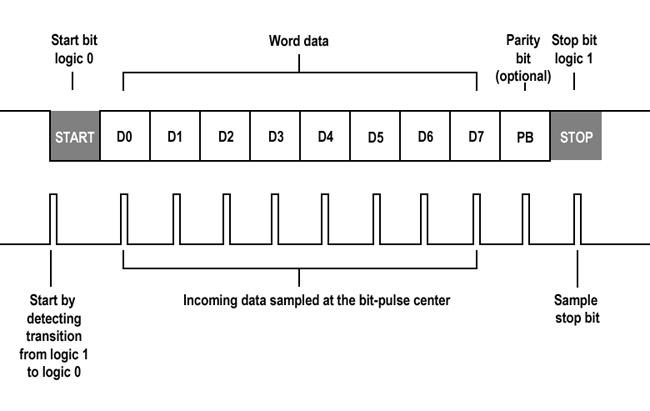 Devices that communicate via UART send packets of pre-defined size that contain additional information regarding the start and end of the message and confirmation of whether the message was received correctly.  For example, to begin communication, the transmitting device pulls the transmit line low, indicating the start of a data packet.  Long-term, however, this means that UART is slower compared to a synchronized form of communication because only a portion of the data transmitted is for the devices’ applications (the rest is for the communication itself!)

Here’s a brief C++ reference for Arduino Serial and SoftwareSerial initialization and use.

One important aspect to note about UART communication is that it is designed for communication between only two devices at a time.  Because the protocol only sends bits indicating the start of a message, the message content, and the end of a message, there is no method of differentiating multiple transmitting and receiving devices on the same line.  If more than one device attempts to transmit data on the same line, bus contention occurs, and the receiving devices will most likely receive garbage unusable data!

Furthermore, UART is half-duplex, which means that even though communication can occur bidirectionally, both devices cannot transmit data to each other at the same time.  In a project where two Arduinos are communicating with each other via a serial connection, for example, this would mean that at a given time, only one of the Arduinos can be “talking” to the other.  For most applications, however, this fact is relatively unimportant and not disadvantageous in any way.

The next communication protocol we’ll cover is Serial Peripheral Interface (SPI).  SPI is different from UART in several key ways:

The hardware connection diagram for SPI is slightly more complicated, and looks something like this:

The first feature about SPI to note is that it follows a master-slave model.  This means that the communication relies on defining one device as a master, and other devices as slaves.  This creates a hierarchy between the devices signifying which device is effectively “in control” of the others.  We’ll discuss this master-slave model shortly when we describe what a sample communication between a master and slave device might look like.

We noted earlier that multiple slaves can be connected to a single master device.  The hardware diagram for such a system might look something like this: 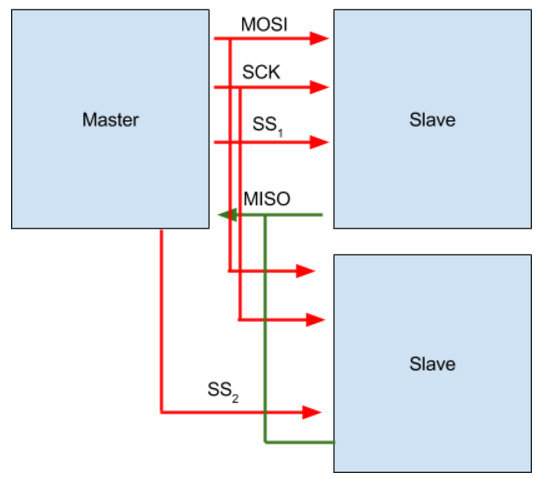 SPI does not require a separate transmit and receive line for each slave that is connected to the master.  One common receive line (MISO) and one common transmit line (MOSI), along with one common clock (SCK) line are connected between all the slaves and the master.  The master device decides which slave it is communicating with through a separate SS line for each slave.  This means that each additional slave that the master communicates with requires another GPIO pin on the master’s side.

There are four distinct combinations of CPOL and CPHA, that can be summarized in a table.

Wikipedia does a great job graphically representing the CPOL and CPHA settings and their relationship to the data being transmitted! 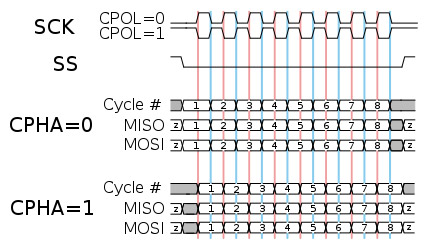 Now we’ll focus on SPI implementation on the Arduino using the Arduino as the master device (SPI.h).  The SPI digital pin connections for SCK, MOSI, and MISO are predefined on Arduino boards.  For the Arduino Uno, the connections are as follows:

Any digital pin can be also used for the SS pin.  To select the device, this digital pin must be driven low. 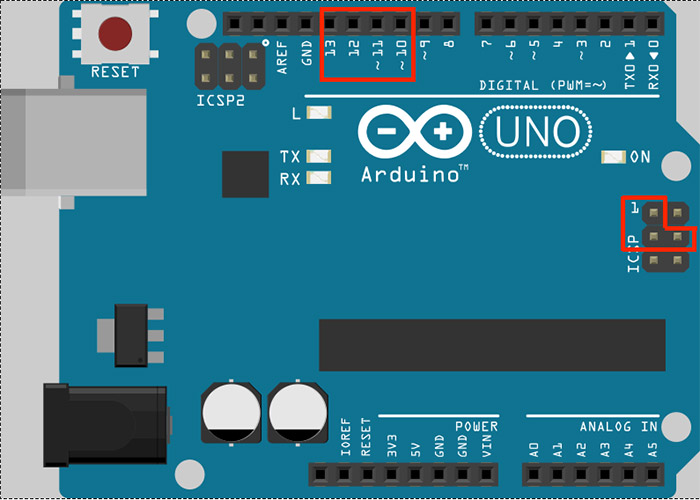 Here’s a brief C++ reference for Arduino SPI initialization and use.

SPI is full-duplex, which means that communication always occurs bidirectionally, even if the application only requires data transfer occur in one direction.  SPI full-duplex data transfer is usually implemented with a shift register. (Check out the appendix for a tutorial on shift registers!)  This means that as each bit is read, the bits before it are shifted over by one place. The foremost bit is subsequently popped off and sent back through the SPI connection to the other device!

At the hardware level, I2C is a two-wire interface—the only two wires required for an I2C connection are a data line (called SDA) and a clock line (called SCL).  The data and clock lines are pulled high in their idle states, and when data needs to be sent over the connection, the lines are pulled low through some MOSFET circuits.  For the purposes of this tutorial, we will not discuss the MOSFET operation inside I2C circuitry.  The important fact to take away is that the system is open-drain, which means that the lines can only be driven low by the devices.  Thus when using I2C in projects, it is crucial to include pull-up resistors (usually something like 4.7kΩ) to ensure that the line is actually pulled high in the idle state. 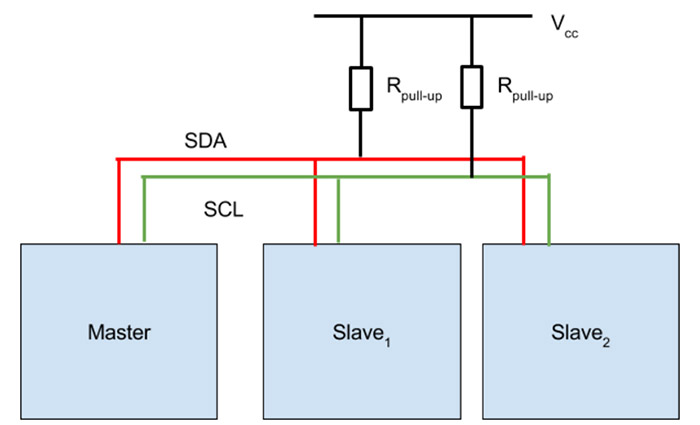 I2C is unique because it solves the issue of interfacing with multiple slave devices through addressing.  Just like in SPI communication, I2C makes use of a master-slave model to establish the “hierarchy” of communication.  However, instead of selecting slaves through separate digital lines, masters select slaves through their unique byte addresses. These addresses might look something like this: 0x1B.  This means that connecting more slaves to a master will not require additional digital lines.  As long as each slave has a unique address, the application will still be able to differentiate the slaves on these addresses alone.  You can think of these addresses like names.  To call a slave’s functionality, the master merely calls its name, and only that slave responds.

I2C gives slaves freedom to decide what communication requests might look like.  Different slaves require different bytes to be written over in different orders over the SDA line to write and request information from them.  In some accelerometer modules, for example, bytes are written to denote which hardware register the master wants to read before any read requests are made.  For these specifications, the user must refer to the slaves’ datasheets for device addresses, register addresses, and device settings.

On the Arduino, I2C implementation occurs through the Wire library (Wire.h).  The Arduino can be configured as either an I2C master or slave device.  On the Arduino Uno, the connections are as follows: 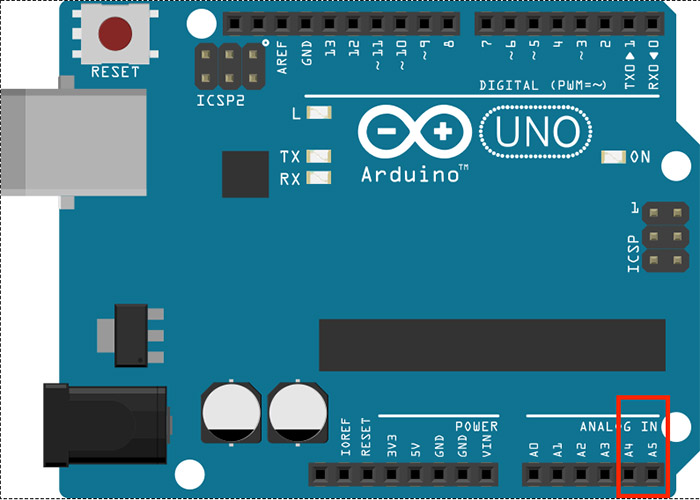 Here’s a brief C++ reference for Arduino I2C initialization and use.

Multiple masters can be connected over an I2C bus just by connecting their SDA and SCL lines to the bus’s lines.  However, only one master can communicate with slaves at a time, because having multiple devices attempting to communicate with each other would lead to bus contention.  Similarly, communication cannot occur bidirectionally from master to slave and from slave to master at the same time because that would also lead to bus contention.  This makes I2C half-duplex, just like UART!

If you made it through this tutorial, you should have all the tools you need to work with the UART, SPI, and I2C communication protocols!  Check out some of our Arduino projects for further examples on using these protocols!

Interested in hearing more about how to make the most of your Arduino projects? Explore some of our comprehensive Aduino guides: