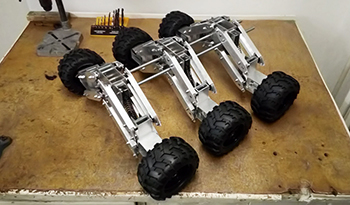 The first thing we’ll have to make are the control arms. They’re relatively simple, just a U profile with 3 holes on each end to attach the bearings. To keep all the holes aligned, I strongly recommend making the control arms in pairs. One more thing to keep in mind – aluminum is really soft. Softer than many types of wood, in fact. While this means that it is relatively easy to drill and cut, it is also very prone to getting scratches in the process. 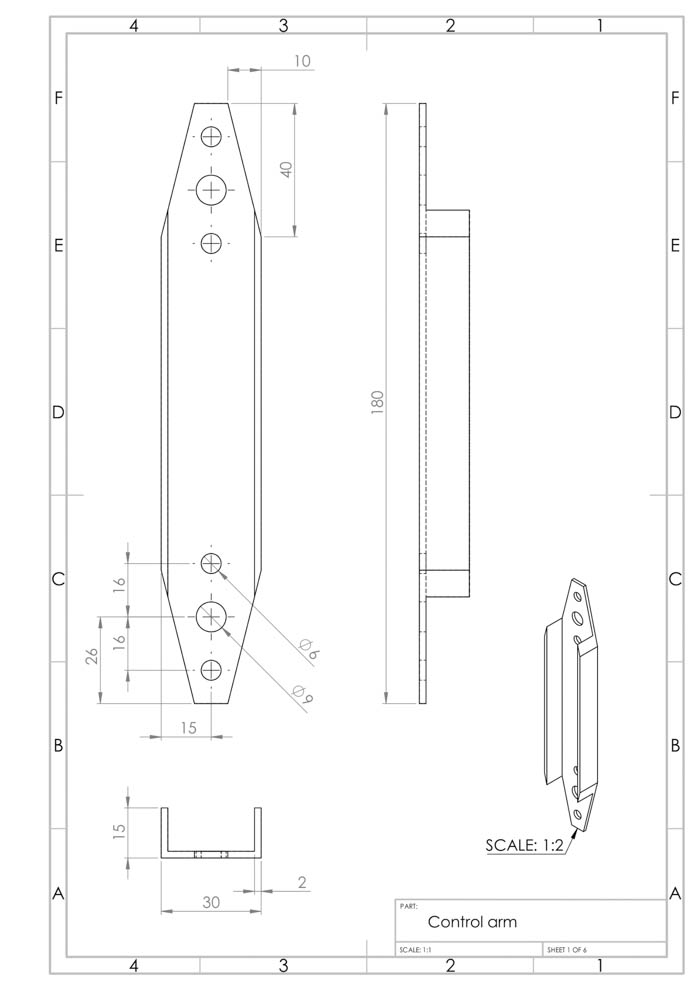 1.1 As the old saying goes – “Measure twice, cut once”. First thing is to measure where the holes will be. I recommend using something sharp, like a box cutter to draw lines on the aluminum, since pen or marker can never get as precise as a sharp knife. 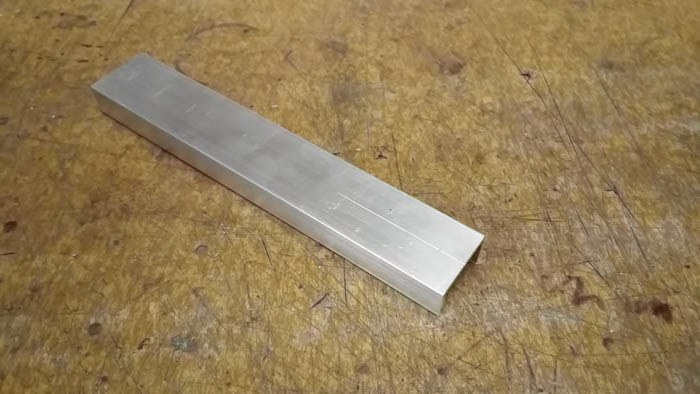 1.2 Next, you should mark the exact spot where the hole is going to be. Even a sharp nail and a hammer will be enough to do the trick. Make a small dent in the aluminum, so that when you start drilling, the drill bit will have some sort of guide and the hole will be precisely where we want it to be. 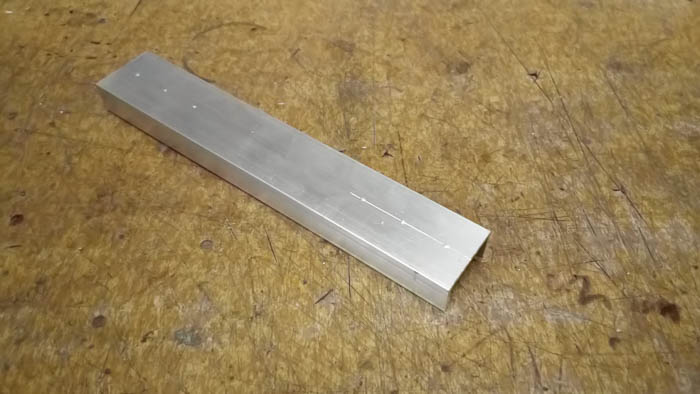 1.3 Now, take a small bore drill bit and drill all six holes you just marked. 2.50 mm bit should be just right. This is not the final diameter of the hole, we’ll only use this for aligning. 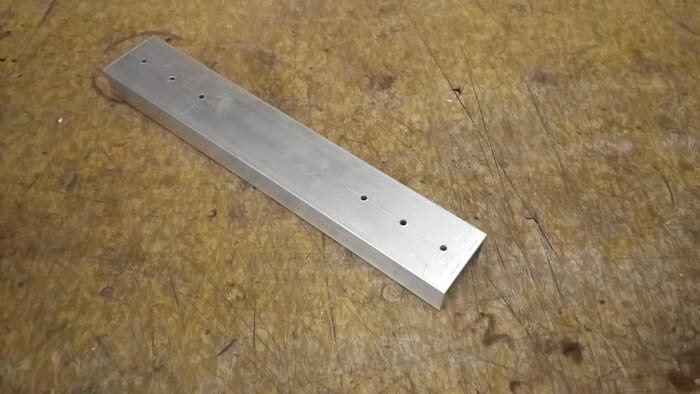 1.4 In this step, we’ll use some C-clamps to hold the two profiles together. Take the profile you just drilled, and then a fresh one with no holes in. Clamp them together very tight. Make sure to align the edges of the profiles as precisely as you can. You can use another profile as a reference surface. 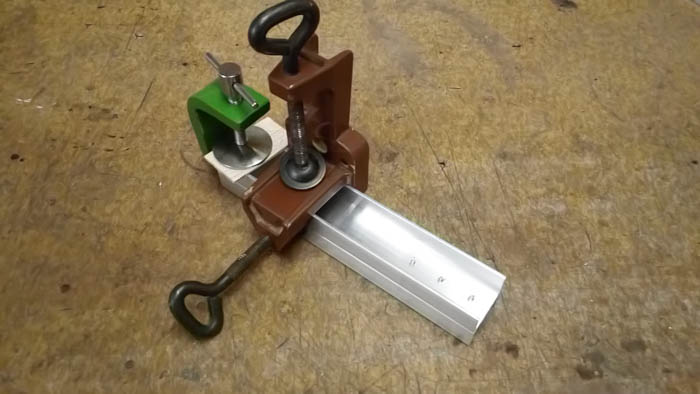 1.5 Now we have two profiles – one with holes, the other without – that are aligned as well as we can. Now, drill two 5 mm holes in one end of the profile, just like you see in the picture. When that is done, knock down all the burrs that will inevitably appear on the other side. 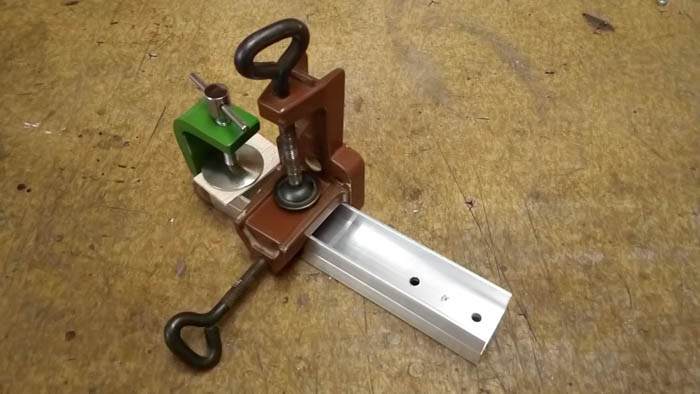 1.6 Remove the temporary clamps and bolt the profiles together using some M5 bolts. This will keep the profiles aligned while we drill the rest of the holes. Be sure to tighten them as much as you can, while also keeping an eye on the alignment of the profiles. If the edges start to get misaligned, you will have to loosen the bolts a bit and align the profiles again. 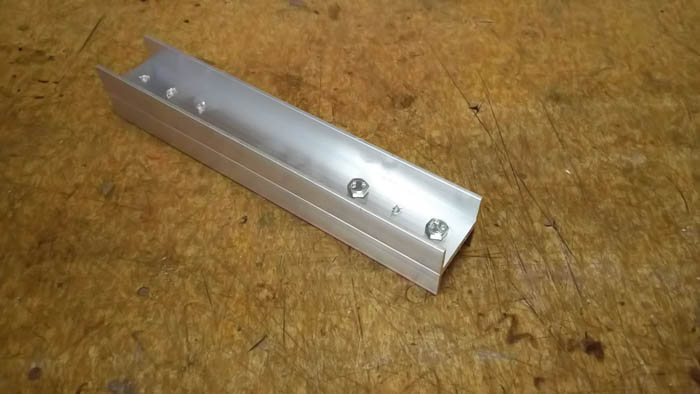 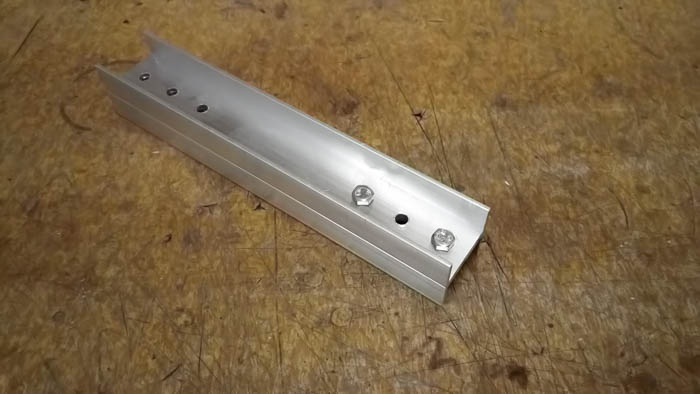 1.8 Drill the middle holes with 9 mm drill bit and knock down all the burrs on the other side. Remove the bolts and enlarge the two 5 mm holes that had the bolts in them with a 6 mm bit. And voila – two brand new (although probably slightly scratched) control arms! Since they were made together, I suggest marking them somehow so that you don’t get them mixed up with the other pairs later on. 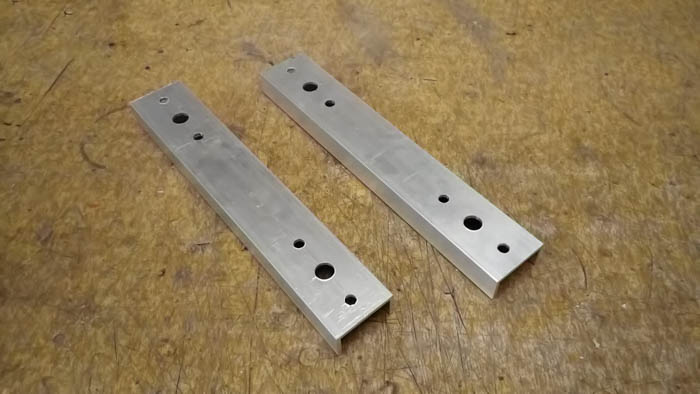 1.9 The final step is to saw off the corners. This is where a bandsaw will come in really handy. If you don’t have access to one, you can still get it done by hand. But since you will have to saw off 96 corners and then finish all the cuts with a file, it might take you a better part of a week to process all of them. Also, the surface won’t look nearly as nice. 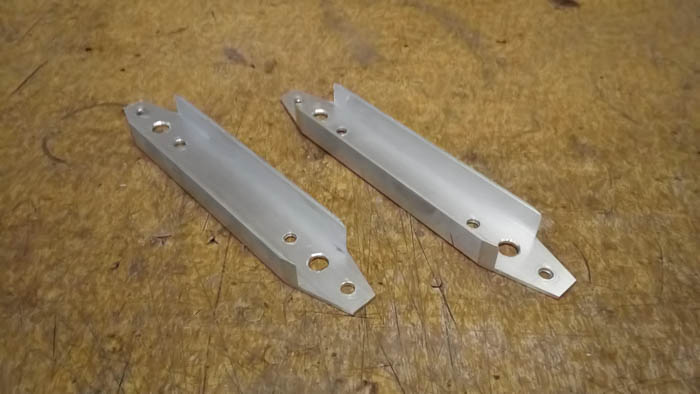 Repeat this entire process twelve times and you have enough control arms to make one ArduRover!