First, to measure flexion of the fingers (finger bending), we must transform the finger bending to a rotation of the potentiometer. We could make it with simple mechanical system as shown below: 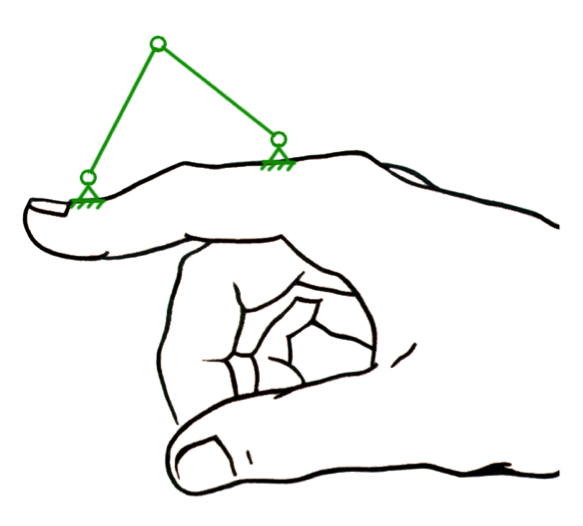 Figure 1: Diagram of a mechanical system for measurement of the finger bending

To make it in real life, we have to model it in a solid state modeling editor, such as Autodesk Inventor. Figure 2: Modeled mechanical system for measurement of the finger bending

Next, we have to 3D print the model. An STL file is a common type of 3D model among all 3D printers. Just export all your models to STL separately and send it to a 3D printer. 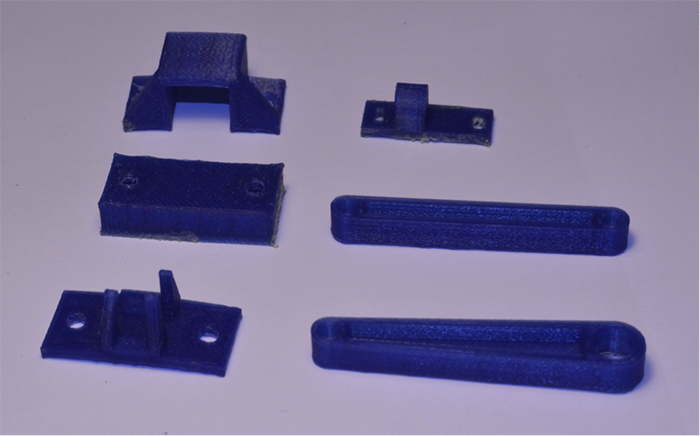 Take your potentiometer (without black knob/grip), screws, nuts, and the 3D printed parts and then assemble them as shown in Figure 4. 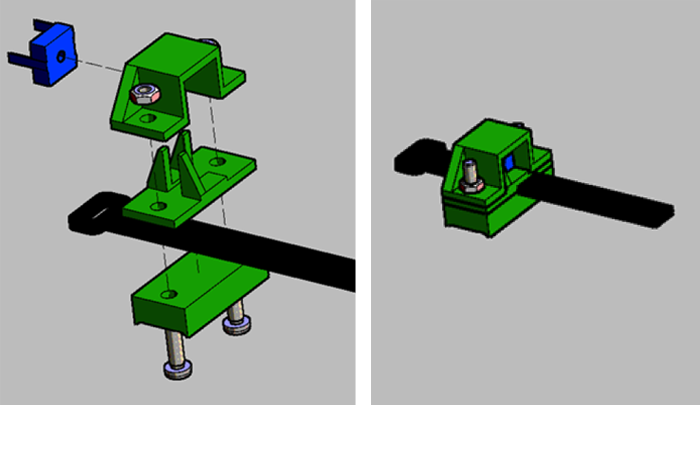 Screw in the joints as shown in Figure 5. Then, we’ll glue the black grip with screwed finger joint. 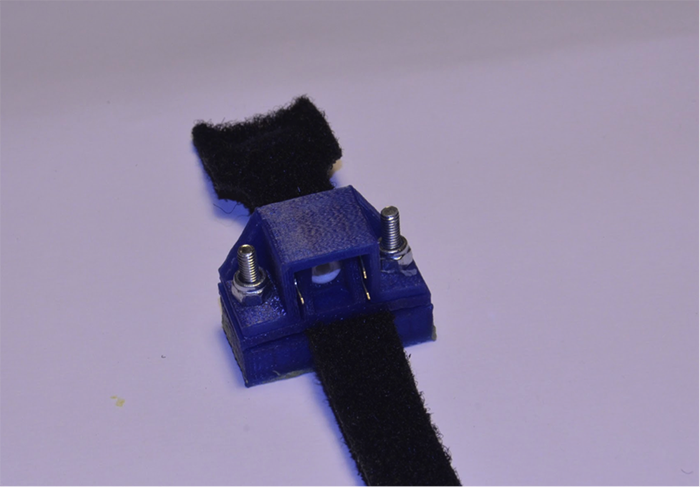 Figure 6: Base finger unit with fastener

Once the joints are screwed in, we’ll glue the assembled fingers to the glove. Use extra strong multi-purpose glue. Surfaces must be clean and dry before gluing. Then apply a thin layer of glue on both surfaces and wait for 10 to 15 minutes. Press the surfaces firmly for a few seconds. You can spread some additional glue around the unit if necessary. It’s recommended that you leave it to dry for about 24 hours.

*DO NOT stick your fingers into the glove while gluing. Use cardboard pieces or other material. Figure 7: Gluing base unit onto the proximal phalanges (at the bottom of each finger)

Now we’re going to glue the finger joint. Take the joint part and another sticky fastener and stick them just above the finger’s nail (Figure 8 & 9). 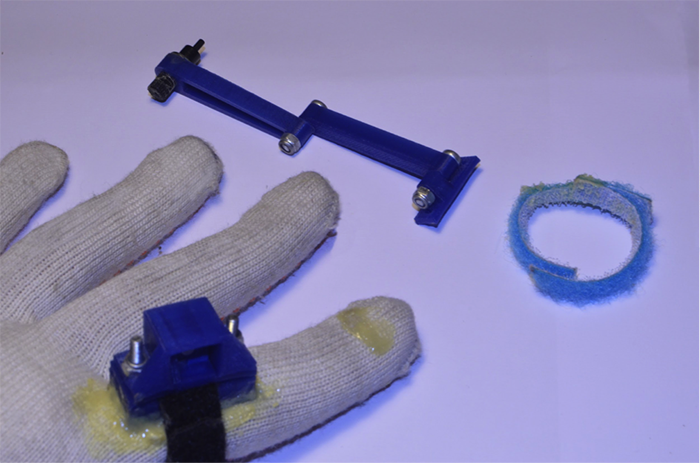 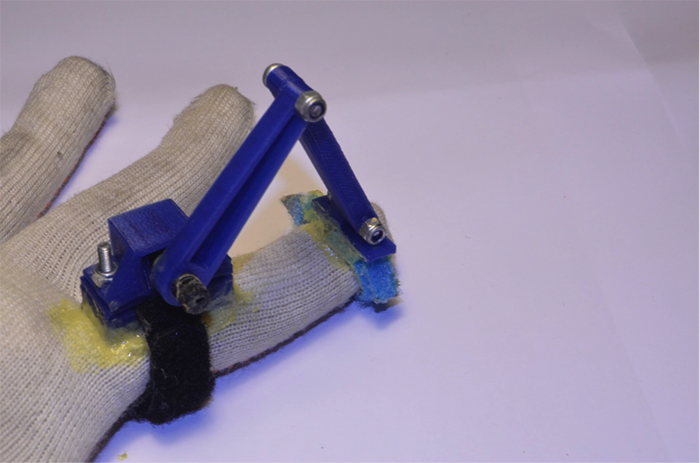 Connect both assembled parts by inserting the black grip into the potentiometer hole.

Please be patient and repeat the same operation 9 more times with each finger.

A wire diagram of the entire module is shown below. 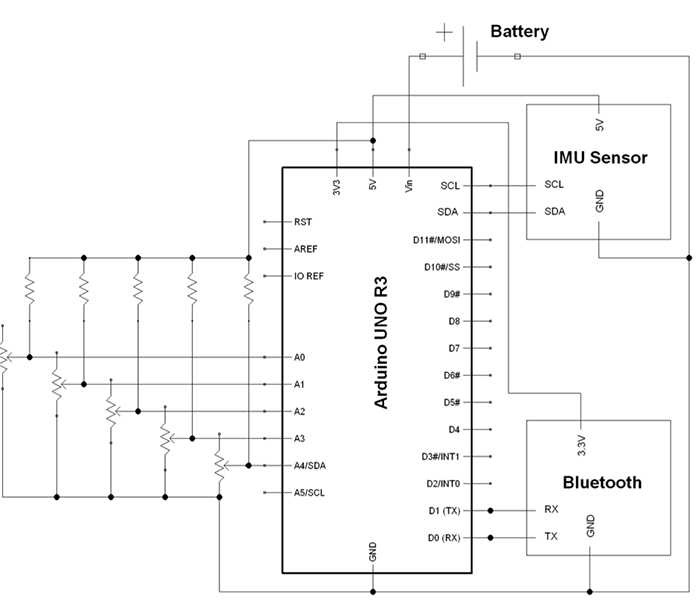 Now, let’s wire up the fingers!

Solder the black-marked and yellow-marked wires to the potentiometer as it shown in Figure 11.

Tie the wires with a plastic cable tie. This is necessary to protect it from any mechanical stress. 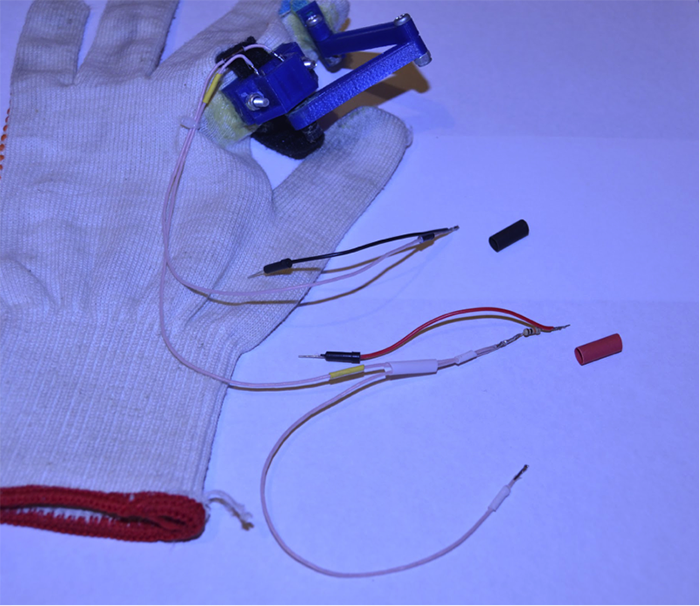 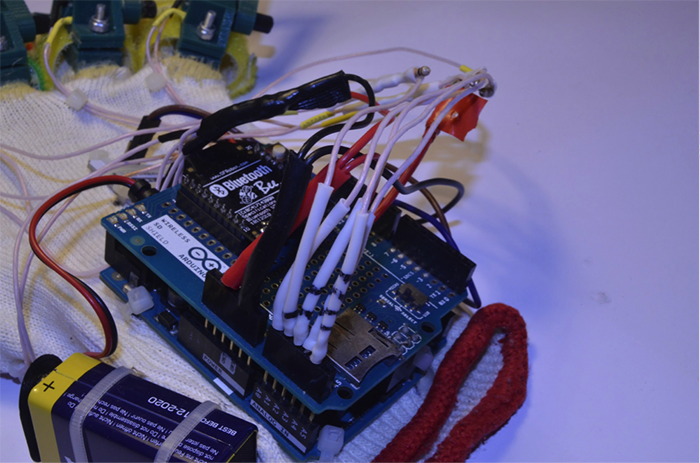 Figure 15: Fingers connected to the body 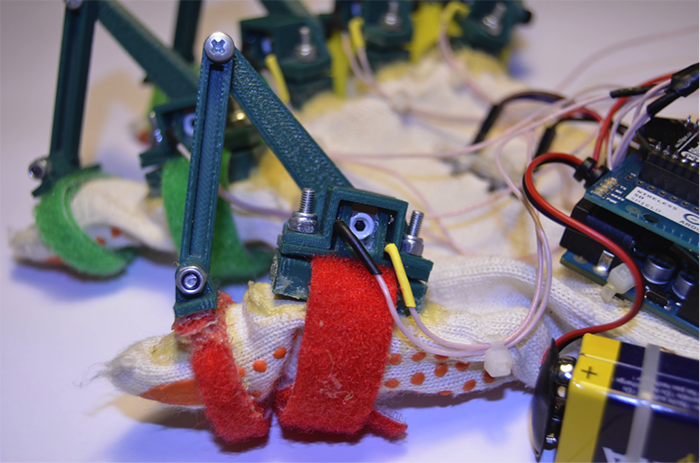 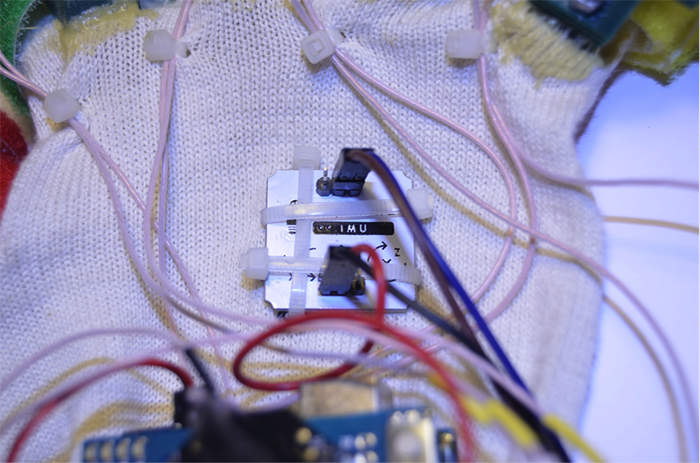 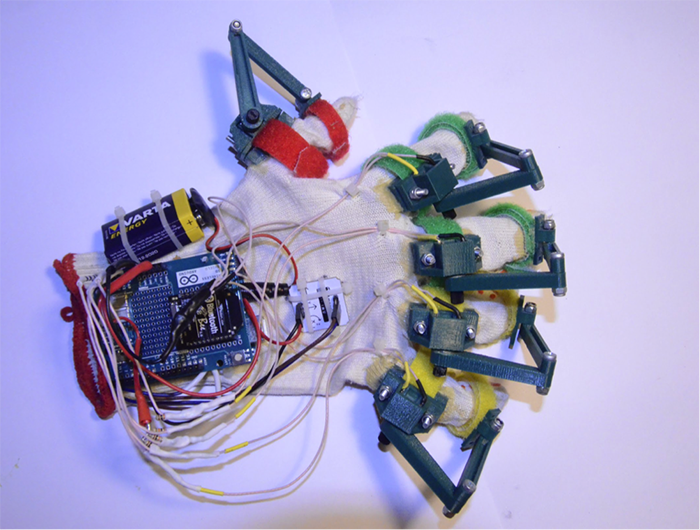 The assembly is done! Let’s move on to programming.

Install a new version of the IMU Library. Please refer back to Part 1 to learn how to install the library.

Open bending.ino and upload it to the Arduino Uno.

You will then see a result shown in Figure 20: Note that you have to follow calibration procedure to be able to measure data accurately.

In Arduino Bluetooth Gloves Part 1 – Basics, we covered the basics of IMU sensor. Now we will learn how to combine gyroscope and accelerometer data.

First, let’s go back and check out our previous measurements. 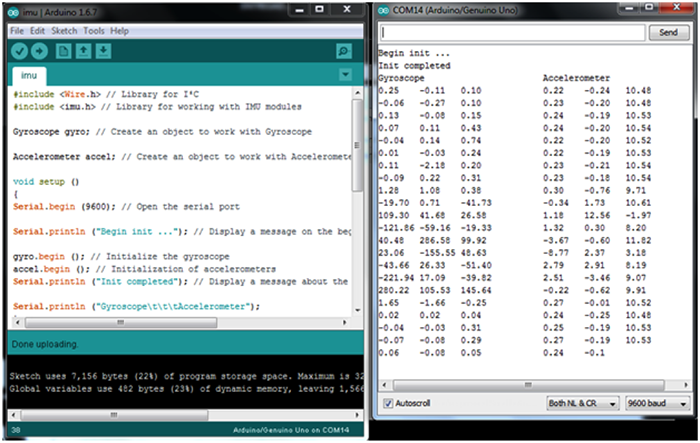 A sensor’s sensitivity means the smallest value change which could be detected with this sensor. Note that the wider the range the less sensivity you may get from the Gyroscope.

An angular rate is a value measured by gyroscope. Thus, a gyroscope is able to estimate how fast a body is rotated about a certain axis. In our application, it’s necessary to determine in which position our glove is. We could summarize all angular rate samples divided by change of time to estimate current angular position.

Because the measurement of angular rate is not continuous but discrete, we get an error called drift. It’s called “drift” because the sum of these changes of angular position will float in time even though a body is at rest.

Let’s look at the gyroscope drift example below:

If you leave your IMU sensor without any motion, you will see drift in action (Figure 22): As mentioned above, due to the tendency of drift, the sum will produce an error that increases in time. But we can mitigate the drift effect by calculating and utilizing zero-rate level.

The definition of the Zero-rate level is described well in the Gyroscope datasheet, at 2.6.2 Zero-rate level section. The main reason of this is a mechanical stress applied to IMU, for example, after soldering on printed curcuit board. After it’s mounted, the Zero-rate level varies slightly with temperature so this change may be neglected. You can look at implementation details in the new version of IMU Library here.

After these enhancements, we could use the gyroscope data, but only for the short term. We still need something which is stable in the long term.

A Low pass filter might be used to filter the gravity vector from random accelerations. The accelerometer’s measurements could be used only in the long term.

One of the most common ways to fuse sensor data is to use a powerful Kalman filter (which is difficult to understand and to implement on Arduino).

where Roll_i – is a calculated Roll angle from the previous iteration

Roll_i+1 – is a new calculated Roll angle with complementary filter

This filter utilizes the gyroscope’s dynamics in the short term and gets rid of the error in the long term based on the accelerometer data. You can test it yourself, just open imu_2.ino in Arduino IDE and upload it to your Arduino UNO.

As we get measured data, we have to send this data to a PC using a wireless Bluetooth connection.

One more thing that requires your attention is a “Serial Select” switch which is placed on the Wireless SD shield. This switch defines where to send data that was read from the wireless connection. 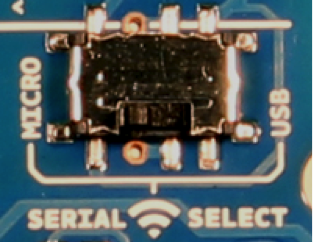 Switch it to the MICRO position. When in the Micro position, the Bluetooth module is connected to the Arduino. Note that the Arduino is still connected to the USB-to-serial converter. If you write data to the serial port from the Arduino, data will be sent in both ways: through USB and wirelessly.

Upload messaging.ino to the Arduino. Notice that every time the Arduino is powered on or resetting it will calibrate in 3 steps:

Open messaging.ino in Arduino IDE and upload it to your Arduino UNO.

Power your Arduino Uno with a 9V battery and pair with your Bluetooth Bee using “1234” as the password. Make sure that after pairing you can find your wireless Bluetooth connection as a Virtual COM port in the Device Manager. 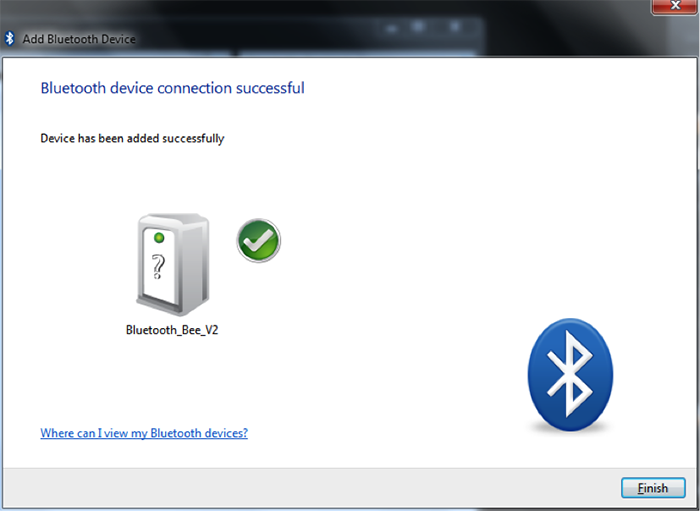 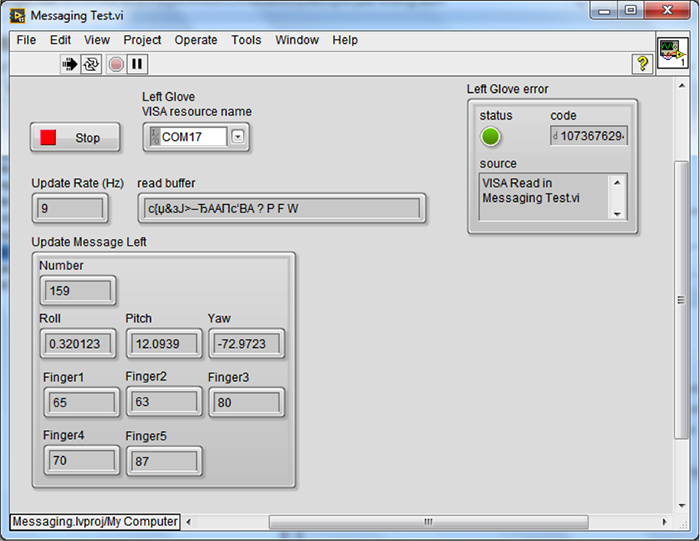 You will see that the data which Arduino Uno is writing in the Serial port is transferred via Bluetooth and read here from a Virtual COM port.

Kinect is an intuitive Xbox 360 game console device controller which is used as alternative to common joysticks. Actually, it is a powerful motion-capture controller that acquires your poses and allows you to control game processes with your hands or body. Even though it was developed for games, it can be used in real-world applications.

To use Kinect for Xbox 360 in a LabVIEW environment you need to install the following:

Open Kinect.lvproj LabVIEW Project and Kinect Test.vi from Project Explorer window, then Run it. If all requirements were installed correctly, you will see video and Kinect processing results similar to the one below:

Now we need to put everything together in one application.

Open Arduino Gloves.lvproj LabVIEW Project. Then open Host Main.vi from the Project explorer window. Choose the corresponding COM port for the Left and Right Gloves Bluetooth connection. Plug in Kinect and make sure that it’s ready to use.

Then put on Arduino Bluetooth gloves and power them on. Provide the required conditions for a calibration.

After this, run Host Main.vi and you will be able to see the following: 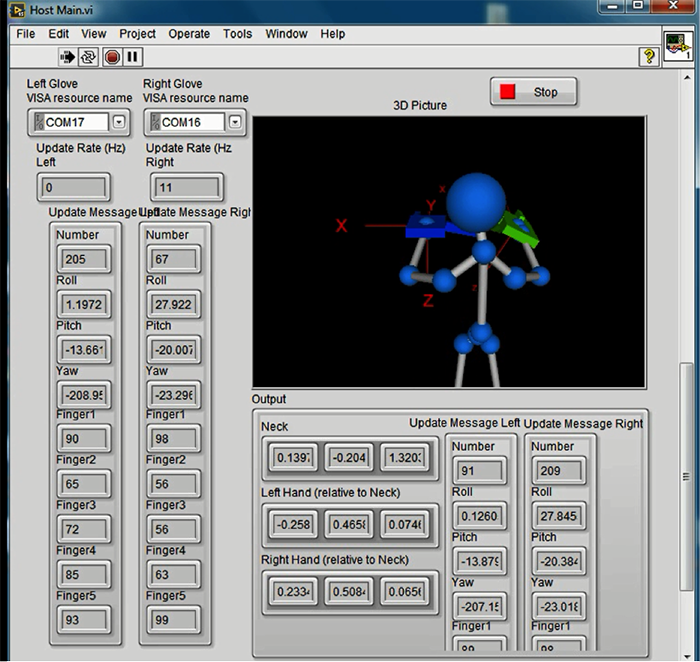 Figure 29: Getting all measurements in one application

Make sure that every finger flexion is measured correctly and that Roll, Pitch, and Yaw correspond to the actual attitude of your hand.

Arduino Bluetooth gloves could be useful for a real-life robot control application. All processed data could be transmitted to any third-party application with UDP messages.

As an example of a third-party application, a Simulator of an industrial robot arm – Puma560 was picked and added UDP Receiver loop. Open Puma560 Simulator.lvproj, Host Main.vi and Puma560 Simulator.vi from Project Explorer Window.

Choose the corresponding COM port for the Left and Right Gloves Bluetooth connection. Plug in Kinect and make sure that its ready to use.

Then put on Arduino Bluetooth gloves and power them on, and provide the required conditions for a calibration.

After this Run both VIs and you will get the following results: 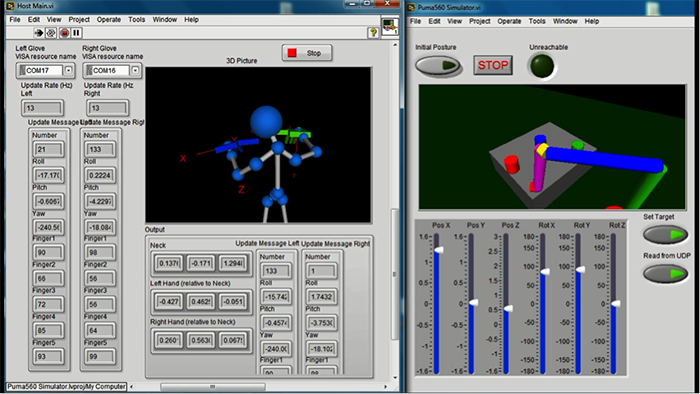