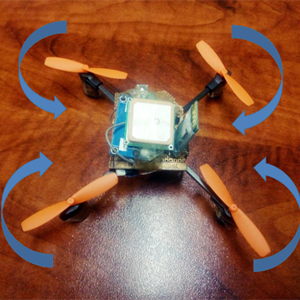 If you’re a drone enthusiast and love being creative about drones, then this instructable is for you! We build a really cheap DIY drone from ballpoint pen ink tubes and thermocol in Part 1 of this series. Part 2 guides you to build your own DIY Arduino Drone which will be ready to use on its own OR along with a GPS “follow me” capability which will be discussed in the next part. The easy-to-build mini drone follows you on your way.

It uses Bluetooth to communicate with your smartphone and utilizes the GPS coordinates of your cell phone to track you wherever you go. This autonomous drone lets you do your work and minimizes the headache of manual control. Let’s see what goes into making this cheap follow me mini quadcopter.

Components for the DIY Arduino Drone

2. A mini-drone kit that includes:
a. 4 miniature motors: You can find them at an electronics hobby shop. Aim for a motor with a rating of 400-500 KV. b. 4 motor jackets: Used to hold the motors in place.
c. 4 propellers: Preferably, choose a diameter of 10cm. While buying, make sure the propellers fit firmly on the motor’s rotors. d. Li-polymer battery: A 3.7V battery with a rating of 300-500mAh and 25C would be enough to give a flight time of 10-15 minutes. e. Battery charger: Choose a 3.7V battery charger, perhaps bought with the battery.
f. Frame: You can even build one of your own, or you can get one from amazon. 3. A Bluetooth module: Choose an HC-05/HC-06 Bluetooth module. You can find it online for less than $3. 4. A NEO-6M-001 GPS module: It’s used to get the current coordinates of the drone. You can find it online for just $13.

5. Soldering rod and soldering wire: To solder components on the perf board.

6. Transistors: Three pieces of 2N2222 NPN bipolar transistors 7. Perf board/ PCB: It’s needed to mount the circuit. 8. Cutter: Needed to cut the perf board. 9. Hot glue/tape: Will keep the circuit in place.

As the first step, you need to build a mini-drone. Get the motors and mount them in the jackets such that the wires are stretched out of the small opening.

Now, insert the wires in the arms as shown in the picture. You can use pen ink tubes to build your own arms.

Connect the central assembly frame to the other end of the arms and fasten the screws of the arms.

Connect the propellers to the motors.

Now, you need to connect your motors to your Arduino Nano. Make connections as shown in the schematic diagram. You need to MIND THE POLARITY of the motors; otherwise, your drone won’t fly. Motors connected to opposite arms should spin in the same direction (see the picture showing the direction of rotation of propellers). Moreover, to provide the rated current to the motors, you need to add transistors, as the Arduino itself isn’t enough to supply the required current to the motors. Insert the legs of the components into the perf board and solder them. Make connections as follows:

If a motor doesn’t move in the intended direction, swap its pins.

There you go, now you have a fully functional Arduino powered DIY Mini Drone to fly around the house or outside. But do you want a hands free version that can follow you almost anywhere? For the next part of this Arduino DIY Drone series we will be teaching you how to set up a GPS tracking mechanism which syncs with your phone.