Display characters with LEDs! How to use a matrix LED 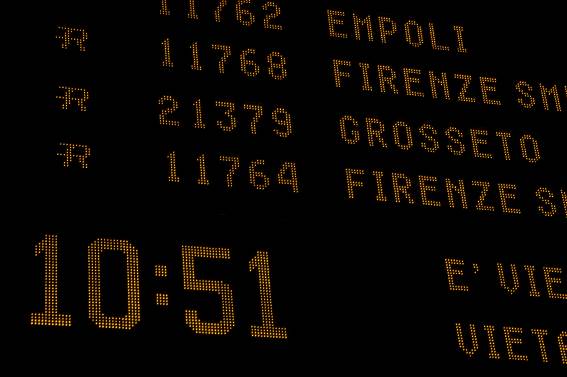 Dot matrix LEDs are standard electronic components for electronics kits. Using these components, you can control a large number of LEDs with just a small number of pins. We will introduce dynamic lighting control, which is a standard control method for dot matrix LEDs.

How can you control LEDs with electronics kits?

If you take a close look at the electric bulletin boards on street corners and stations, you will notice many LEDs arranged in a grid are individually lit to display characters and images.

We will explain dynamic lighting control, which enables you to control a large number of LEDs with just a small number of pins using dot matrix LEDs, standard electronic components in electronics kits. 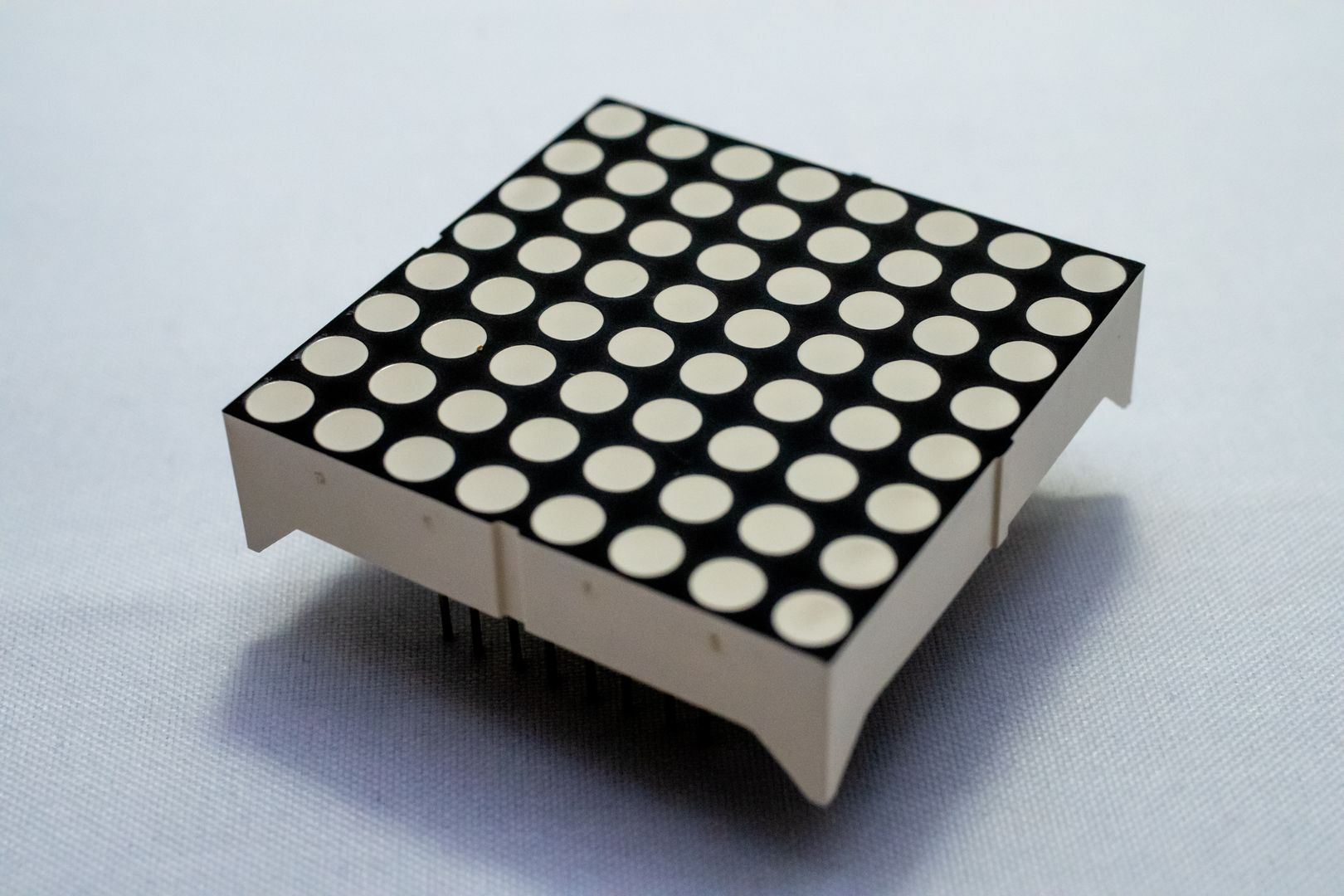 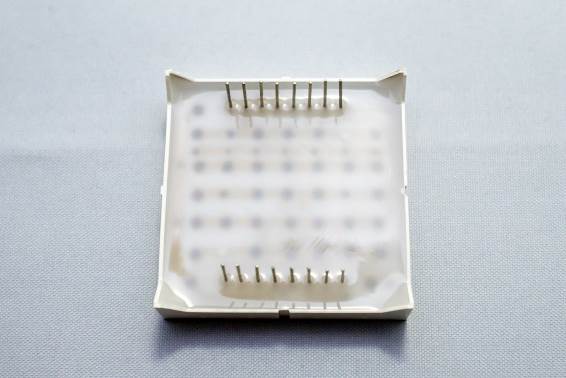 We will explain how to use a dot matrix LED equipped with a total of 64 LEDs in 8 columns x 8 rows, which are often used in electronics kits. There are only 16 wires for this dot matrix LED, including the number of columns and rows. 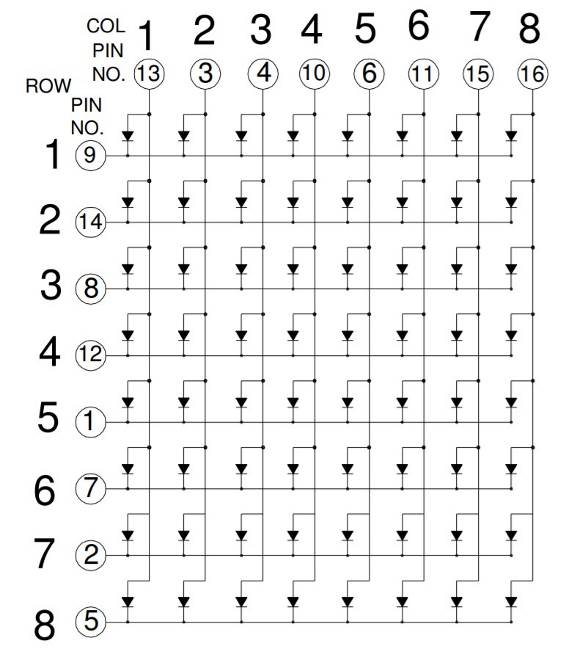 Dot matrix LEDs do not have a current limiting resistor. While looking at the data sheet, connect eight resistors to either the anode side or the cathode side.

The resistance value is determined by the voltage (5V) of the Arduino digital input / output pin, the forward voltage drop (VF) unique to the LED, and the brightness (current) of the LED. However, please note that Arduinos have a limit on the current value that can be drawn from the pin. It doesn’t matter whether the resistor is connected to the anode side or the cathode side. 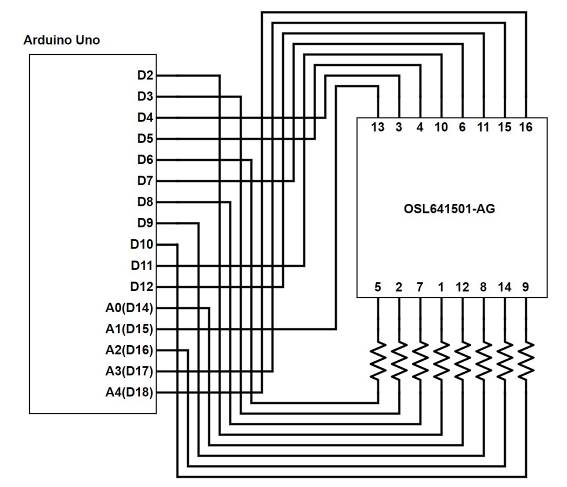 A circuit diagram connecting an Arduino Uno and dot matrix LED. It looks like a complicated circuit because there are so many wires, but the circuit does not necessarily have to use this wiring pattern. If you know the anode side and the cathode side of the LED, then the difference in wiring can be absorbed by the sketching.

When using an Arduino Uno, wire away from the digital 0,1 (TX, RX), used for writing sketches, and digital 13 to which the built-in LED is connected. Although there will be shortages of digital terminals, use analog A0 to A5, respectively, as digital D14 to D19, wiring 16 pins.

First, let’s start with the basic control of dynamic lighting 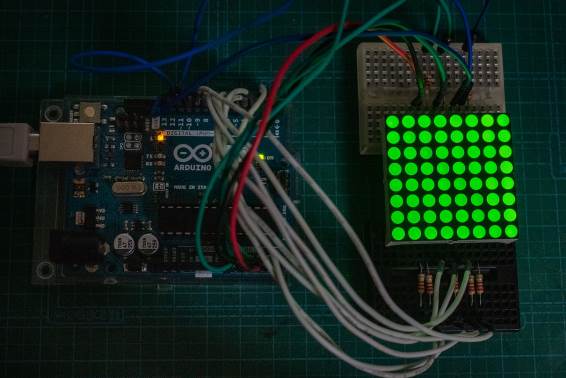 If you use an array and a “for statement” for the dot matrix LED, it will be a simple sketch.

We will briefly explain the flow of the program.

In the following setup function, in order to define the state of the pins used in the Arduino, each pin is initialized one by one using the anode / cathode array and the “for statement.”

In the outer “for statement,” the cathode side of the lit line is set to LOW so that the current flows through the entire line. Afterwards, specify the columns you want to light in order by the inner “for statement.” We will turn on the LEDs in every row this time, so set all of the anode sides to HIGH. When this is done, the entire line will light up. By repeating this operation quickly for all rows, it seems like all LEDs are lit at the same time.

If you enable the delay function, which is commented out on the 29th line of code, you can see how the display is switched on line by line. In this way, dynamic lighting is a method that quickly switches the LED ON / OFF to make it appear as if multiple LEDs are lit at the same time.

LED lighting is controlled by an array 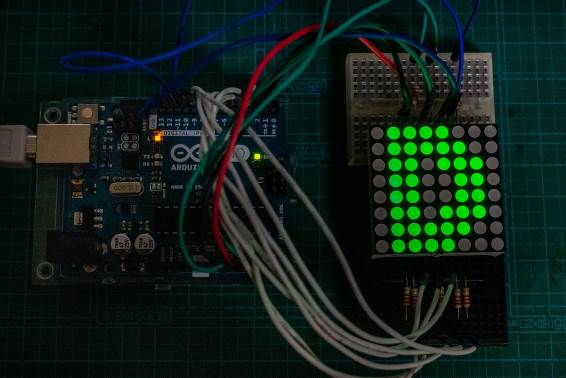 At this point, you are close to understanding how dot-matrix LEDs are controlled. However, it’s easy to simply turn on the LEDs, so let’s switch the lighting state of the LEDs. In this example, let’s display the letter “D” from DEVICE PLUS.

Since only the data type 0 and 1 (boolean type) are required for LED ON / OFF control, the lighting data for the letter “D” is defined using an array, as shown below. Let’s define the array in the manner of a dot picture, assuming that an LED that’s lit up is “1” and an LED that is turned off is “0”. Since we are using an 8 x 8 dot matrix, the array is also 8 x 8.

Let’s change the sketch so that the contents of the array are reflected in the display. Change the digitalWrite function in the double “for statement” to refer to the defined array.

A sketch that reflects these changes is shown below.

When you execute the sketch, the LED should be lit according to the contents of the array. As with the sketch above, if you enable the commented out delay function, you can see how the LEDs are switched on while tracing the shape of the D line by line.

At this point, you should understand the dynamic lighting control of dot matrix LEDs.

Slide the characters and control them like an electric bulletin board 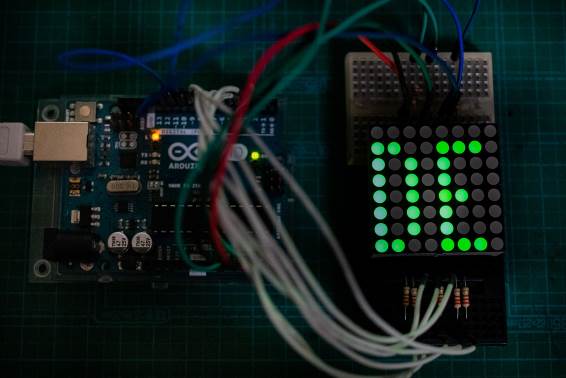 In order to control LEDs continuously, it is necessary to have an idea about how to process it without stopping the movement of the microcontroller at all. Furthermore, in order to display many characters, as with an electric bulletin board, a significant amount of array data is required, and it’s necessary to consider how to extract the part to be displayed from it.

Therefore, so as not to stop the microcontroller, we will add a process to scroll the characters while measuring the elapsed time using the millis function.

The array of the character data also becomes larger if you want to scroll it. We will create array data that can scroll the characters “DEVICE PLUS”.

The sketch with the added function for scrolling is as follows. The flow of the whole sketch is to extract the array of the part to be displayed from the array that stores the character data, and scroll it at the specified time. Since Arduino devices run continuously, they always perform dynamic lighting control.

You can adjust the scroll speed of this sketch by changing the number for SCROLL_TIME on the 23rd line. The video is a little hard to see because it reflects light, but you can see the shape of the characters even if you increase the speed up to 70ms.

Increasing the number of LEDs and performing more complicated controls 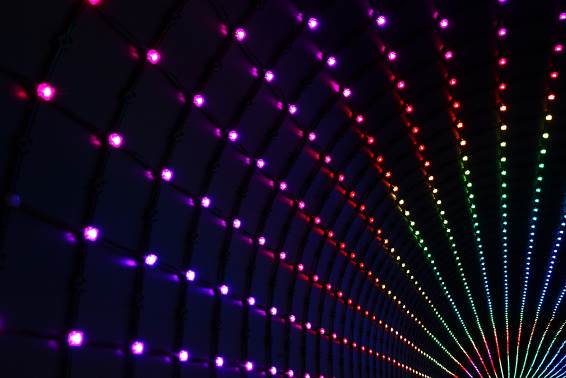 By directly controlling the dot matrix LED using an Arduino, you are limited to moving the 8 x 8 dot matrix LED. To control a larger dot-matrix LED, communication control using a dedicated IC and external memory are required.

It’s an easy-to-obtain electronic component both for electronics kits and learning purposes, so if you buy an Arduino, it’s a good idea to buy one together with it.