How To MacGyver A Laser Tripwire Using Arduino 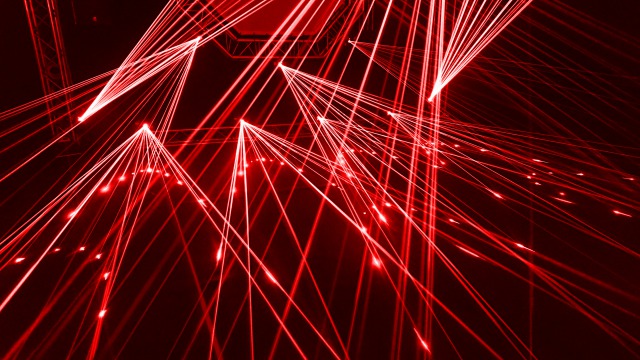 Purpose
This tutorial describes how to create laser tripwire with an Arduino Uno. If you are unfamiliar with the Arduino platform please refer to the “Setting Up Arduino Tutorial.”

WARNING: Lasers can be harmful to the eyes and you should never look directly into the beam.

The circuit design for this project is fairly simple. There are 3 parts of the circuit: the laser power, the photoresistor receiver (the sensor), and the LED indicator (the actuator). Microcontrollers are typically said to receive information from the outside world through sensors and to relay information or perform actions through actuators. I am choosing to use a LED indicator as my actuator, but this could be an alarm, SMS text, or even a door lock.

I always like to make a schematic (Figure 1: Circuit Schematic) using Fritzing, an open-source schematic capture and PCB routing software. This way I always have something to reference in the future. You can download Fritzing using the following link (optional): http://fritzing.org/home/ 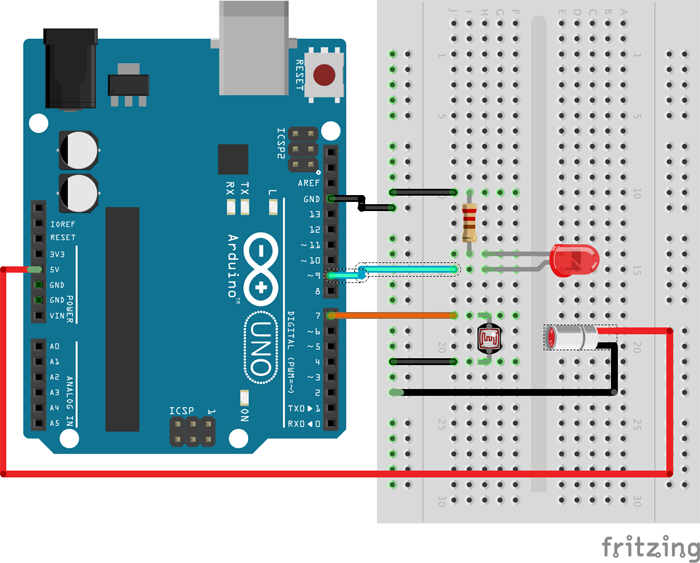 The first part of the circuit is the power for the laser diode. You can power the laser diode of the 5V pin (Red Wire). Although I want to be able to turn the laser on/off, the Digital Output pins on the Arduino do not provide enough power for my laser diode. The negative lead will go to GND (Black Wire). Make sure you don’t require a current limiting resistor for your laser diode. If you do, size appropriately.

Next, we will create our actuator (LED indicator). The purpose of the actuator is to inform us that the laser diode beam has been broken. The LED and resistor should be connected in series between Pin 9 (Light Blue Wire) and GND (Black Wire). The resistor is there to limit current through the LED and should be sized accordingly depending on your LED to prevent burning it out. Remember that the longer lead on the LED is positive and should be connected to Pin 9. 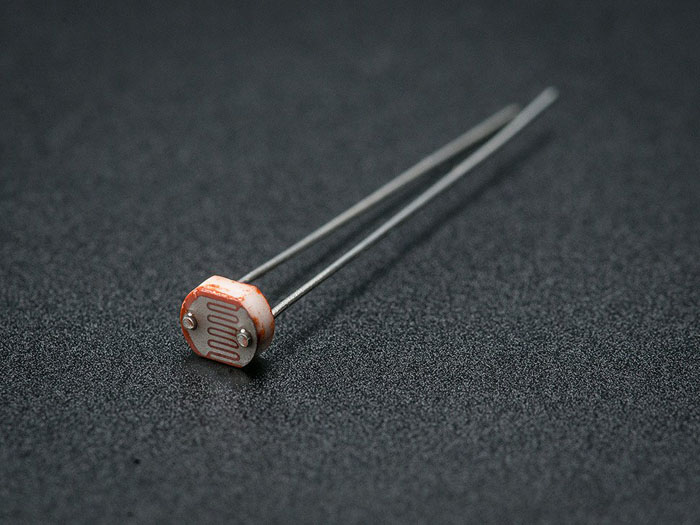 The first part of the code is to define the pins. This step is optional, but I chose to give the pins descriptive names so they are easy to remember and track. Also, if I ever change how the circuit is wired I only have to change the Pin Definition as opposed to changing every line of code where the pin number is mentioned.

In the setup part of the code, configure the LED pin as a digital output. 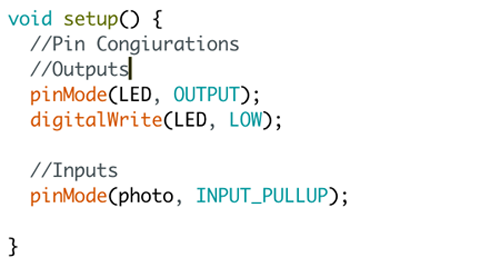 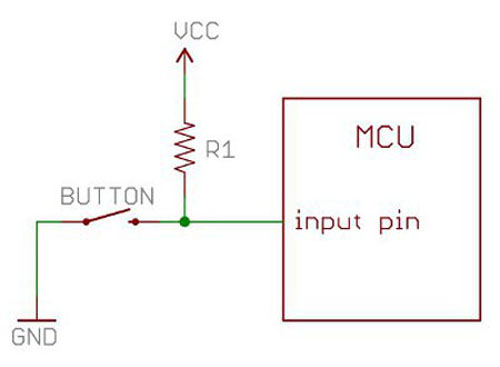 3.0 Uploading and Running the Code 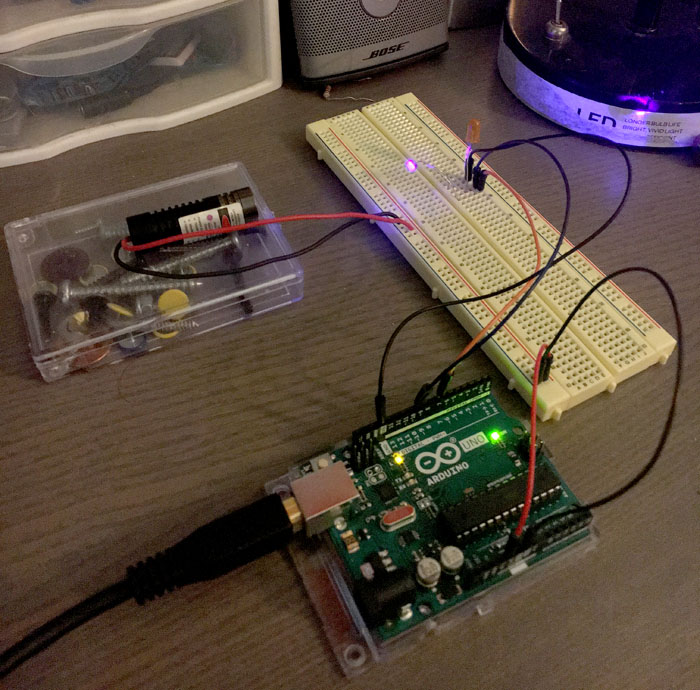 Upload the code to the Arduino. Make sure the Arduino is connected using the 9V Power Adapter as power over USB might not be sufficient to power both the Arduino and the laser diode. Once the program begins, the laser diode should be outputting a beam of light. If the beam is shining on the photoresistor, the LED will be off (Figure 8: Laser Tripwire). When the beam is broken, the LED lights up indicating the trip wire has been tripped (Figure 9: Tripwire Broken). 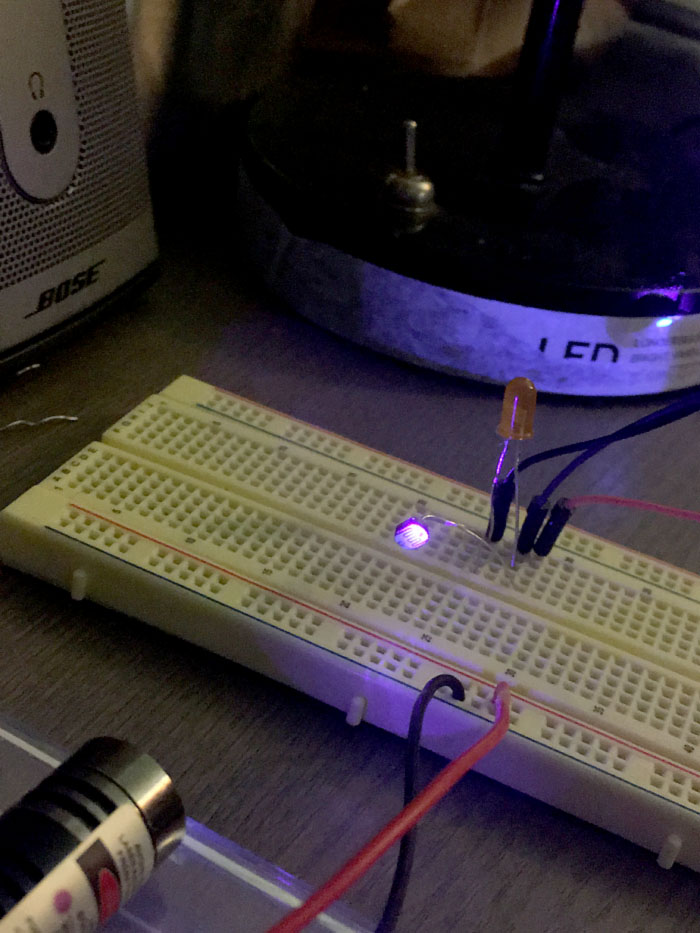 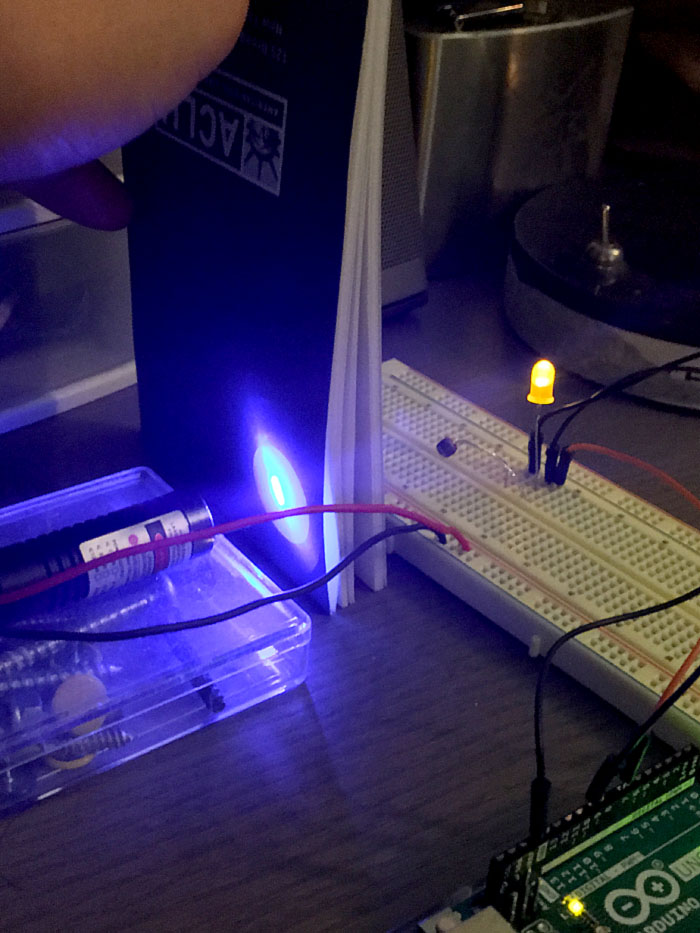