If you’ve been following along with Part 1 of this tutorial, you now have a mechanical shell of a printer. The shell of the printer should include the makings of your X, Y, and Z axes. In Part 2, we’ll put together electronic components to create a functional 3D printer. We’ll be assembling RAMPS, connecting stepper motors and hot ends to the boards, and adding a power source.

After the mechanical build of Part 1, we must now move to the electrical design. The first step is to define your power requirements. Find the datasheets for all your arts and add up their current draw. This is your absolute minimum power requirement. For a factor of safety, add 30 percent to this number. Keep in mind, though, that as you add components, you’ll have to get larger power supplies if you cut too close to the maximum draw. As such, I decided to use a 12V 30A power supply, since that would continue to serve the printer even with the addition of multiple new parts, such as another extruder or heated bed. Much of the rest of the electrical design is heavily dictated by RAMPS. There are labeled pins on the board for every component that is used in this tutorial. Therefore, the RAMPS board is probably the most important part of the electronics and we will begin there.

Prepare RAMPS 1.4 board. Some models of the board come assembled, while others require you to solder some connectors. If the second option applies to you, solder the components to your board until it resembles Figure 1. 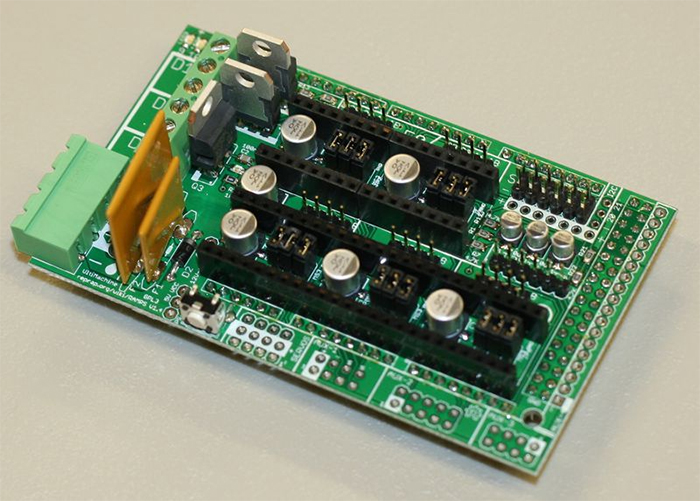 The RAMPS board can also be used for other application, so we’re going to configure the board for 3D printing. Your RAMPS board should have come with a bag of header jumpers. Insert 3 jumpers into each of the teal boxes shown in Figure 2 to connect the vertical headers. Stepper motors move in steps, allowing them to be highly accurate. These headers allow all of the steppers to move in 1/16th steps, increasing the accuracy. 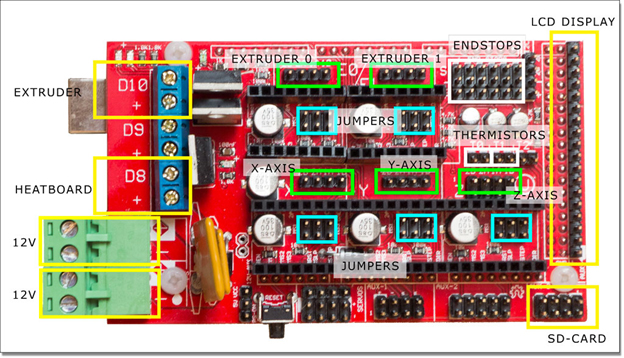 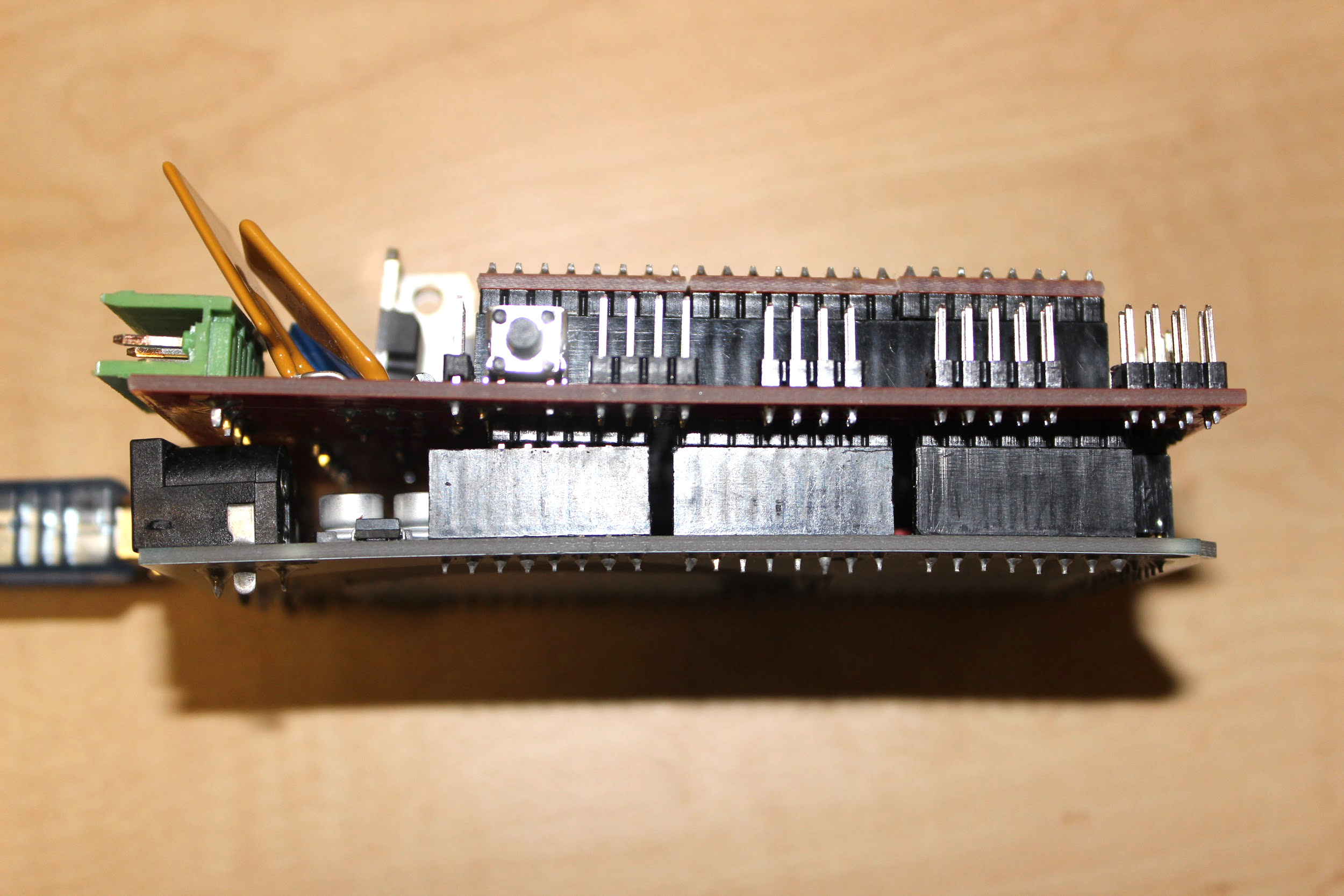 Figure 3: RAMPS board pressed into Arduino board 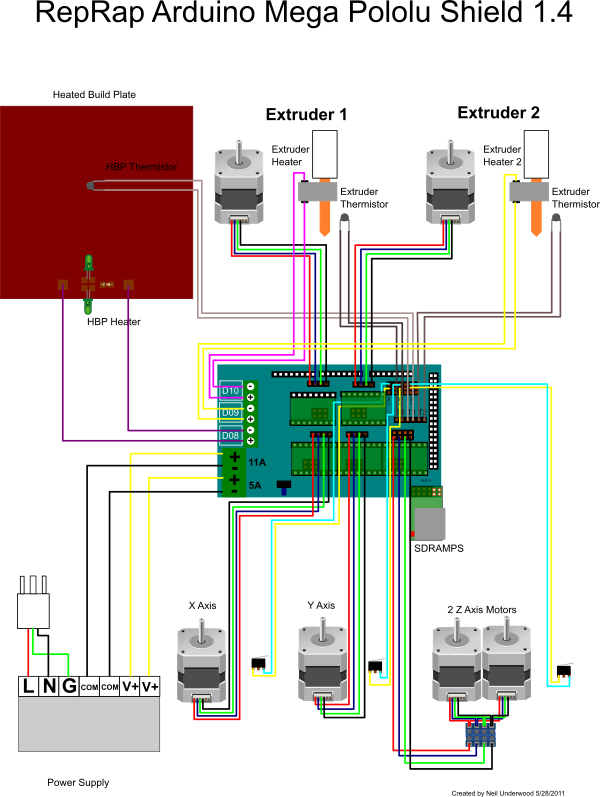 Insert the five motor drivers into the female headers above where you put the jumpers earlier. Make sure the current limiting potentiometers are faced away from the blue D8 to D10 pins. If you do not set the orientation this way, it could damage the stepper motors. Please refer to below Figure 5 for the correct orientation. 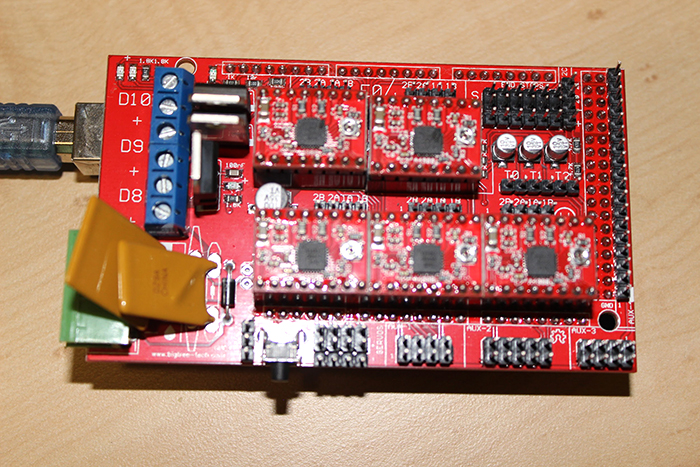 For ease of construction, you’ll need to partially disassemble the printer shell that was assembled in the last step. Start by removing the top section of the printer with the pulleys, motors, and extruder. Separate out the wires from the motors. They’ll be needed to connect to RAMPS later. Also, remove the print bed support plate, which was put on the z-axis motors. 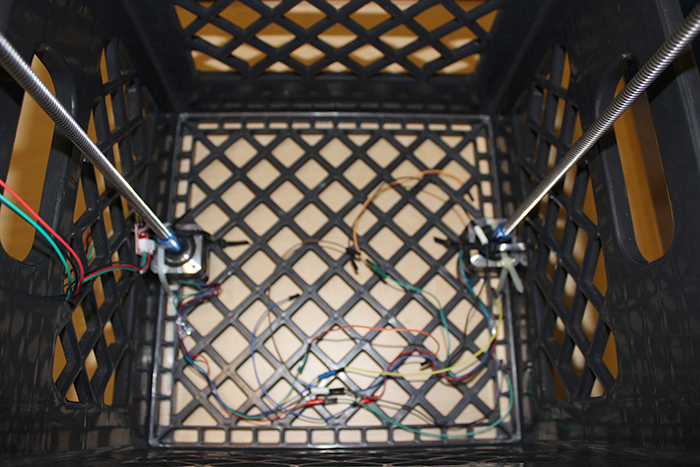 Once those preliminary steps are accomplished, it’s time to start soldering. Most stepper motors will come with bare wire ends. These can either be crimped or, as in the case with this tutorial, soldered with another wire to facilitate the connection these motors to RAMPS. I soldered the male end of a wire to the bare wire and used the female end to connect to the header on RAMPS. 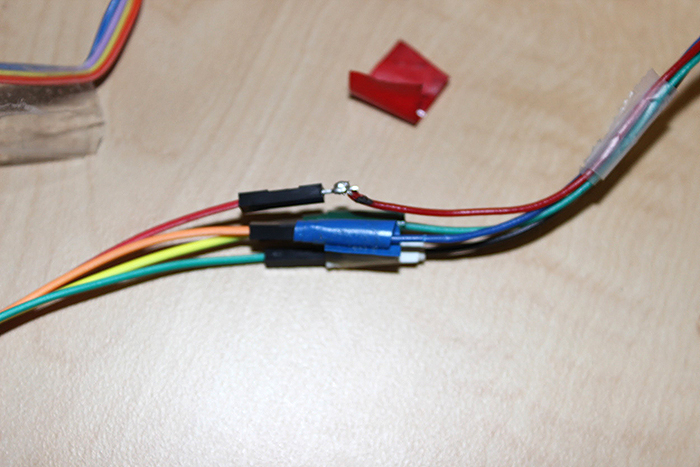 Finally, connect the stepper motors to RAMPS via the pins labeled x, y, and z. In the case of our belt configuration, the two motors on the top plates should be connected to the X and Y headers. It doesn’t matter which of the top motors is attached to which axis due to the configuration used. That will be discussed further in the belt configuration step later. The two Z axis motors should be attached to the headers labeled Z. Check the documentation for your stepper motors for in which order the wires are connected to the board. For the NEMA 14 steppers used in this tutorial, the connection order goes black, green, blue, red, with the black wire at the 2B pin. You may need to flip this polarity if you have set up your z-axis to run in two different directions. Figure 8 below shows the complete set up for all the motors. 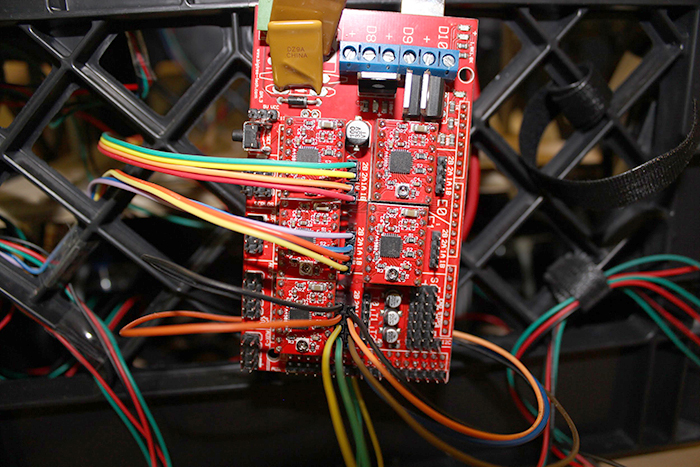 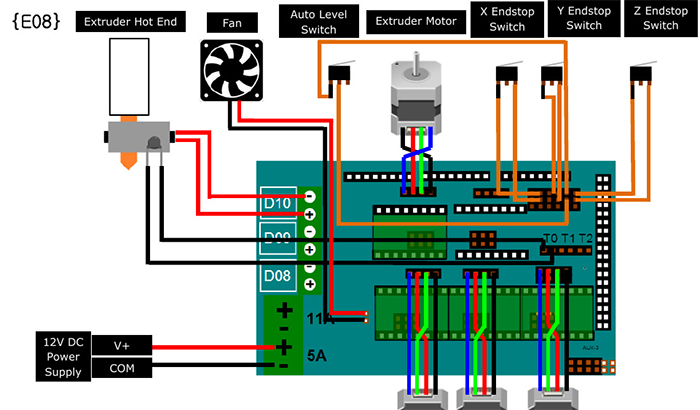 The hot end and extruder for your printer should have four sets of wires: the extruder fan, the extruder motor, the heater, and the thermistor. Figure 11 will show the final connection of all these components.

The extruder fan should be connected to its dedicated power pins as shown in Figure 10. Your printer may use other fans whose wirings are also shown below. You will need to solder this connection and trim the wires afterward.

The extruder motor should be connected to the pins labeled E0. RAMPS has an extra header for a second extruder if you wish to use it in the future. 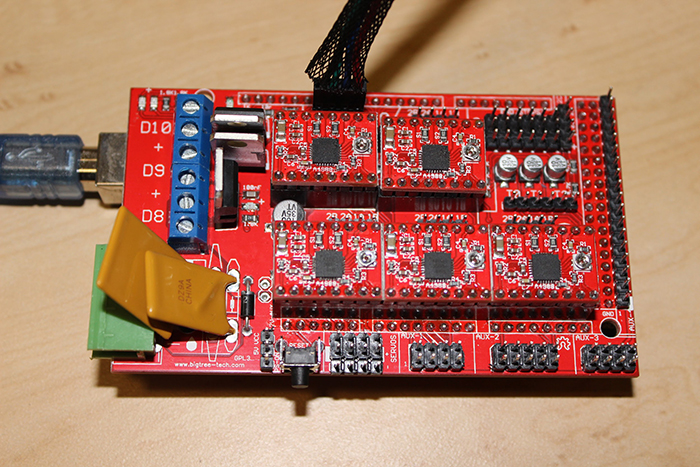 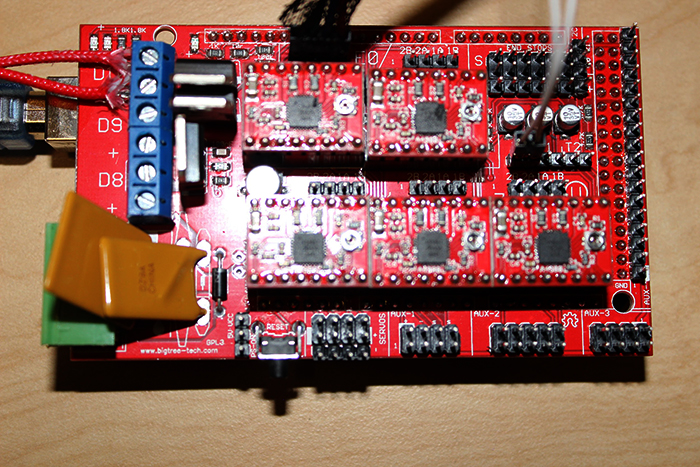 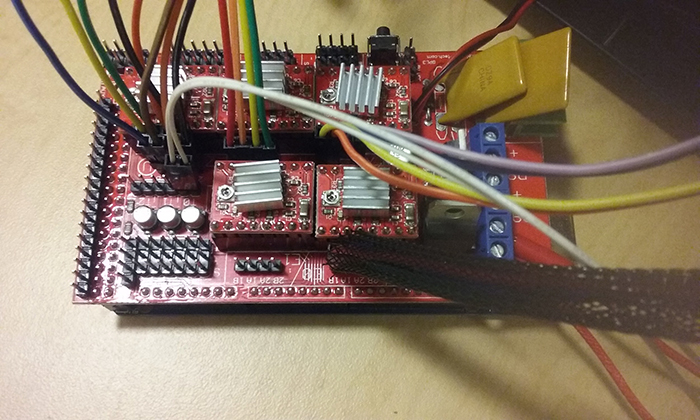 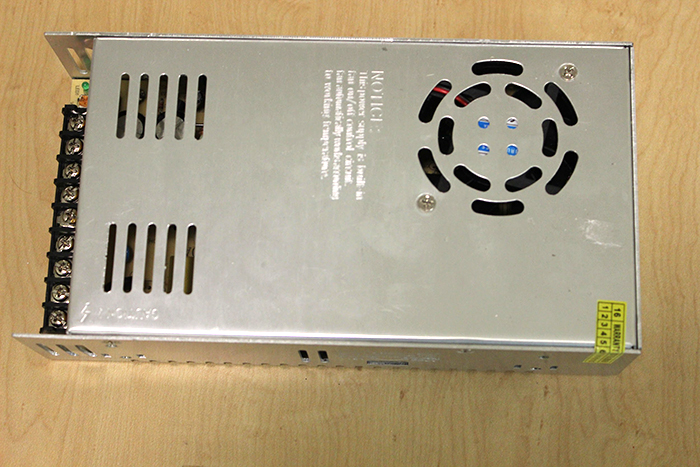 Take out your three-pronged cable, shown in Figure 15. 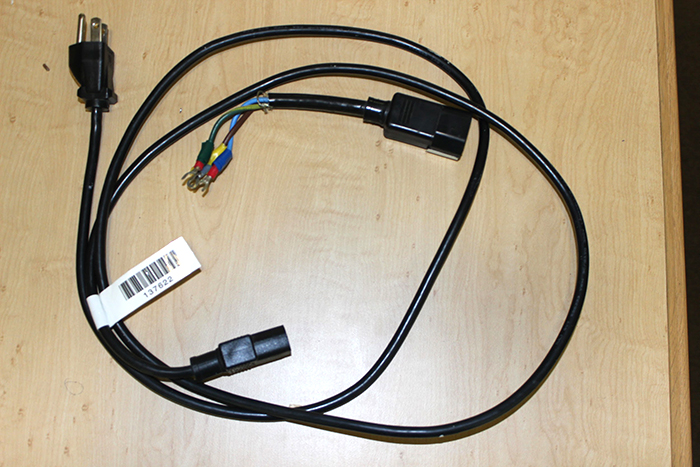 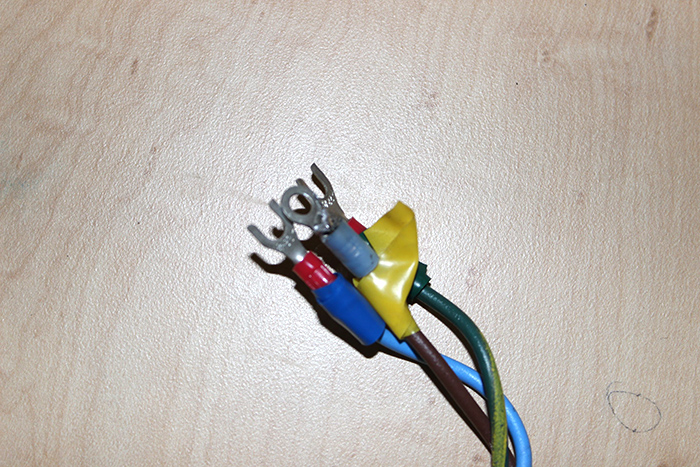 If these are not the colors of your wires, either find the datasheet or use a multimeter to test the plug.

Take four large gauge wires of sufficient length. Strip and crimp on the connectors on one end of the wire. Screw the crimped end of the wires into the power supply at the four -V and +V terminals. On the other end, plug these into RAMPS at the green connection pin. 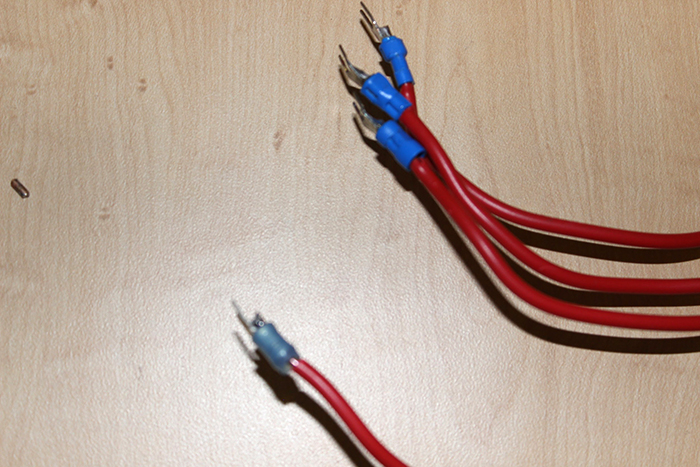 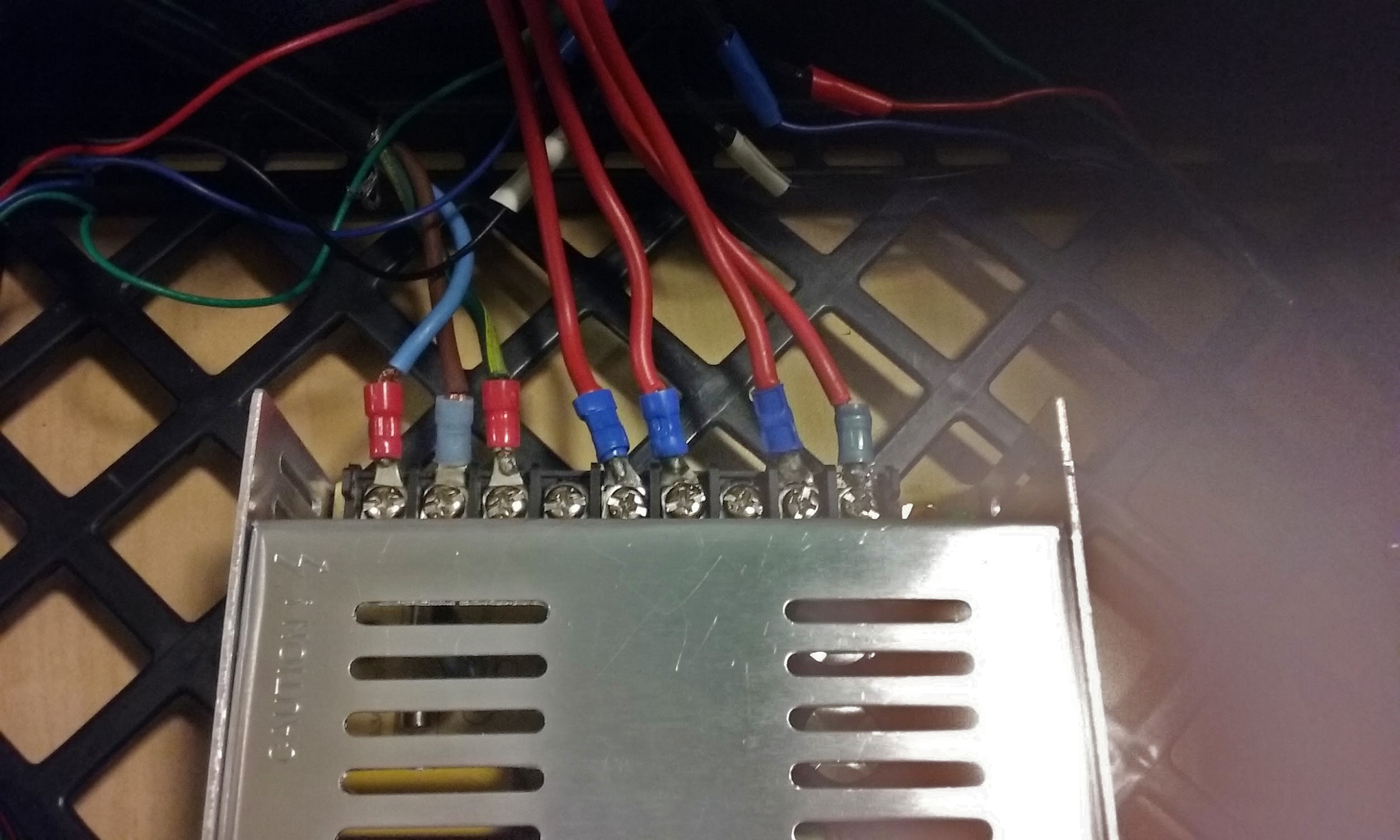 You can now start reassembling the printer. Put the power supply on the floor of the milk crate and strap it down with Velcro or zip ties. Make sure all the wires are out of the way, then thread the build plate back onto the thread screws. Place the top piece over the top again, making sure all of the wires can reach RAMPS, which will be placed on the outside of the crate. Strap the control board to the outside and your printer should look like below.

We’re almost there! We’re just a few steps away from this wired “framebed” to a fully functional 3D printer. In Part 3, we will continue to configure some of its mechanical parts (e.g., belts and end stops), as well as program codes to test the printer.

Lyndsey is currently studying Mechanical Engineering. She has a keen interest in 3D modeling and fabrication. Besides 3D printing, she also has experience with various microcontrollers.