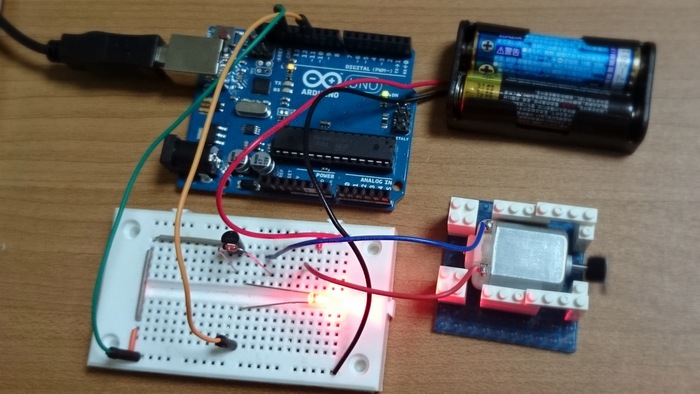 As we have just finished our series on how to make a Stevenson screen using Arduino, you should have a good understanding of how things are working with Arduino. Now things will really get going! I’d like to start working with a motor!

I assume that many products will immediately come to mind when you hear the word “motor,” but most electronic products that move or rotate use a motor.

A motor is simply something that turns, but by using gears, we can realize complicated actions. Over the next few lessons, we’ll learn about the use of motors. 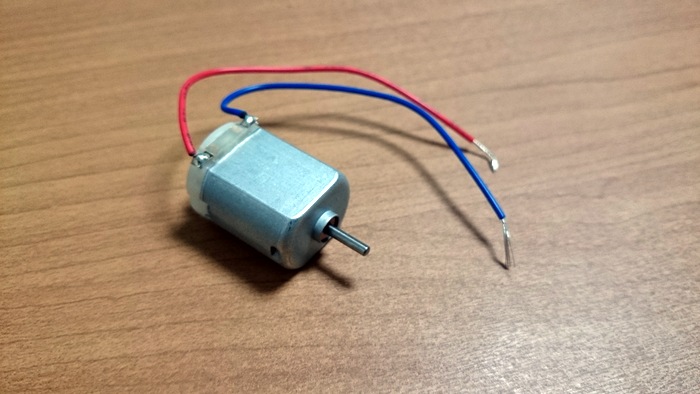 I believe that this is what people imagine when they hear the word “motor.” Many people have probably come across them while playing with radio-controlled cars.

This motor is called a DC motor, with the “DC” standing for “direct current.” Because it is DC, it can be made to move by simply attaching it to a battery.

The internal mechanism of the motor contains enameled wire coiled many times around a magnet, and by passing an electric current through the coil the motor rotates, being repelled by the magnetism. When using a battery, by reversing the positive and negative sides, the magnetism can be reversed and make the motor turn in the opposite direction. 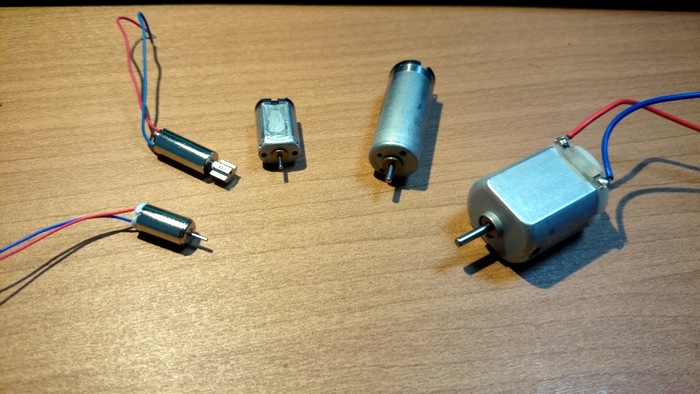 There are many different sizes of motors.

Servo motors are commonly used in electronics. A servo motor contains an integrated control circuit to allow for the control of the revolution angle of the motor. A variety of angles are set upon, and there is a notation for an angle of operation of 120 degrees. 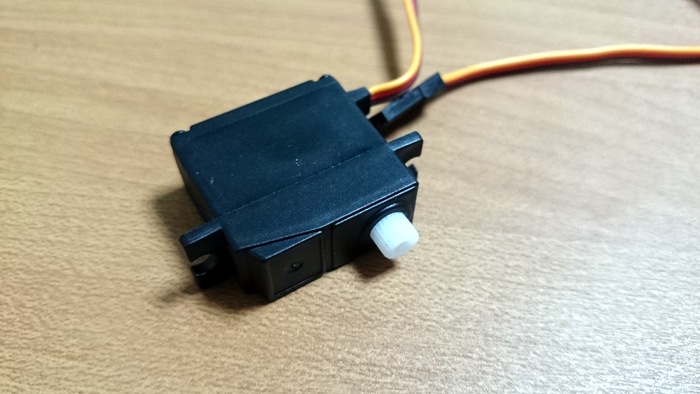 First, let’s use a DC motor. Before using a motor with Arduino, let’s understand the basics of motor operation using only an AA battery. 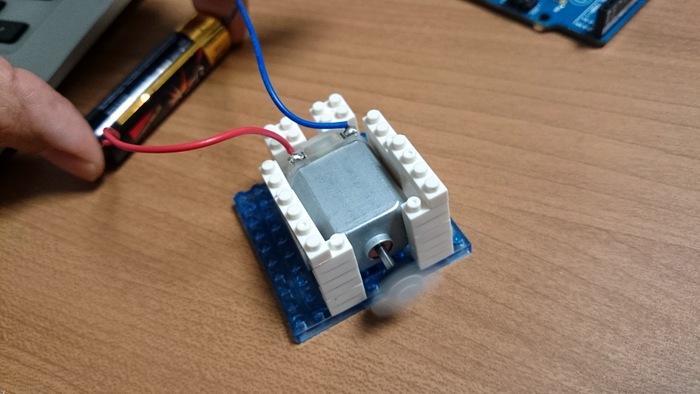 Make the motor move with an AA battery 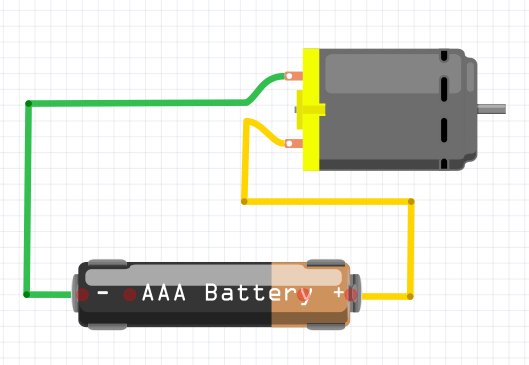 Let’s look at the voltage and current required to rotate a motor.

Looking at the data sheet of our DC motor, it states that the proper voltage is 1.5V and it draws 0.2A with no load. AA batteries have a voltage of 1.5V (dry cell/lithium) or 1.2V (Nickel-metal hydride batteries / Ni-Cd batteries). So, from the data sheet, we see that we can operate the motor with one battery.

What can be done to make the motor rotate faster?

We can make the motor rotate faster by increasing the voltage going to the motor. We can accomplish this by placing the batteries in a series. 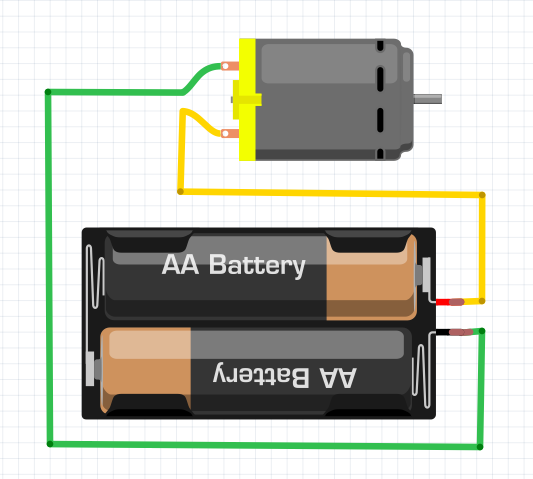 How long will the motor rotate?

The amount of time that a motor will rotate is related to the capacity of the battery. The capacity can be calculated by multiplying the current and the time. For example, if the capacity of your AA battery is 400mAh, then 400mA of current will flow for one hour. Taking the example above, a current of 1.5V, with 0.2A = 200mA, 400 divided by 200 = 2 hours, so we can operate the motor for about 2 hours.

Now, that we understand the basics of motors, how can we use one with Arduino? Let’s compare the operation of motors and Arduino.

Comparing the voltages, we know that the Arduino’s digital pins operate between 0 and 5V, so we understand that we will be able to provide the 1.5V necessary to rotate a motor.

Next, let’s consider the current. When a motor operates at 1.5V it requires 200mA of current.
Looking at the Arduino specs, we see that the digital pins offer a current of 40mA, so we don’t have the required 200mA to make the motor rotate. 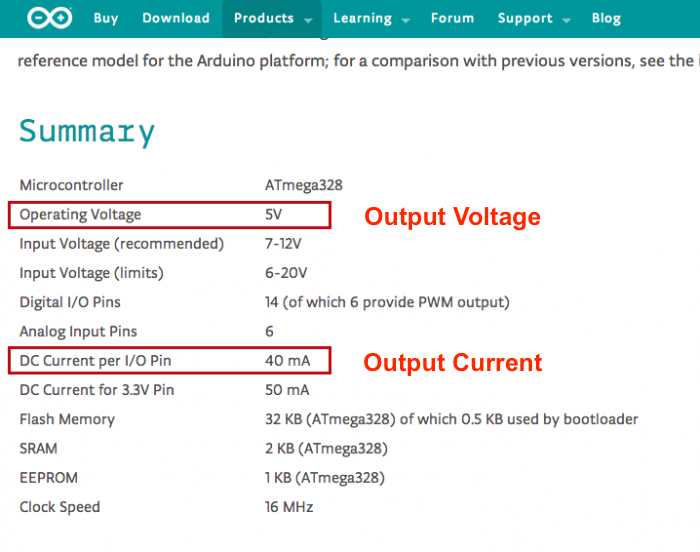 So, what can we do to operate a motor with Arduino? This time, let’s try using a transistor.

Before talking about how transistors work, let’s explain the use of diodes.

Diodes prevent a normal current from going in the opposite direction and play a role in rectification. What is the mechanism that allows them to operate in this way? 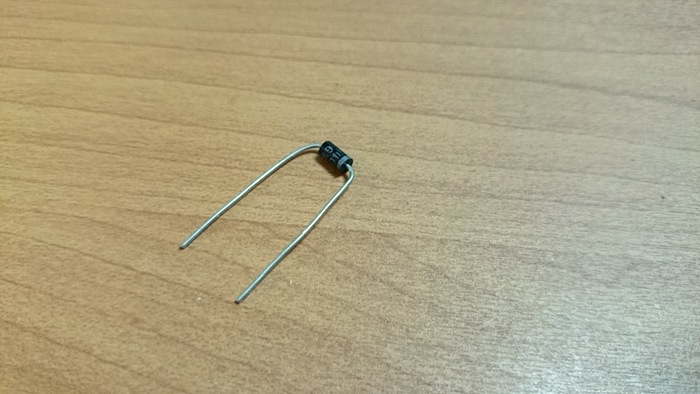 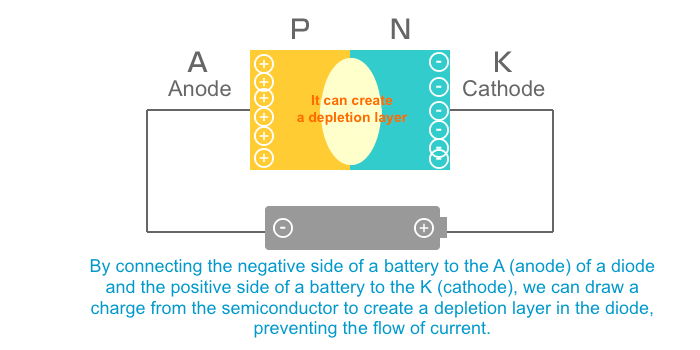 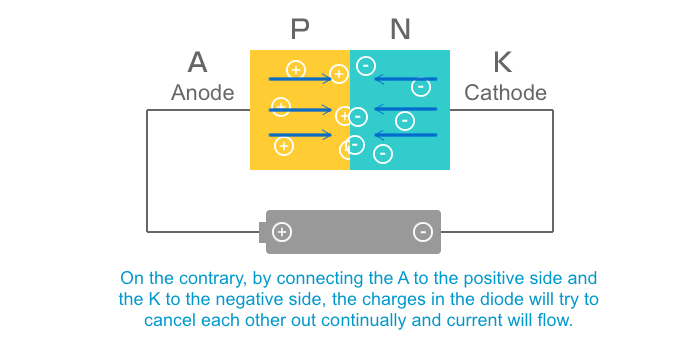 On the contrary, by connecting the A(anode) to the positive side and the K(cathode) to the negative side, the charges in the diode will try to cancel each other out continually and a constant flow of current can be maintained in the diode.

In this way, the diode prevents current from flowing in the opposite direction. 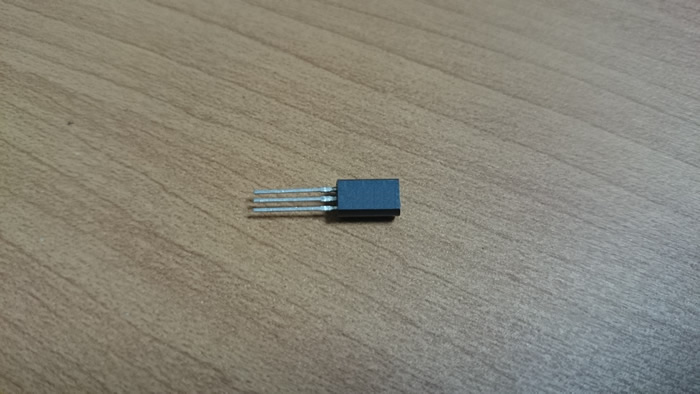 A transistor allows one to control the flow of electricity. Basically, it plays the role of a switch in a circuit, and it is used to amplify current.

The diodes are made up of N-type and P-type semiconductors, but transistors are composed of three parts, such as “NPN-type” and “PNP-type.” The special feature is that the semiconductor sandwiched in the middle is much narrower than the outer semiconductors, and they put that characteristic to use. 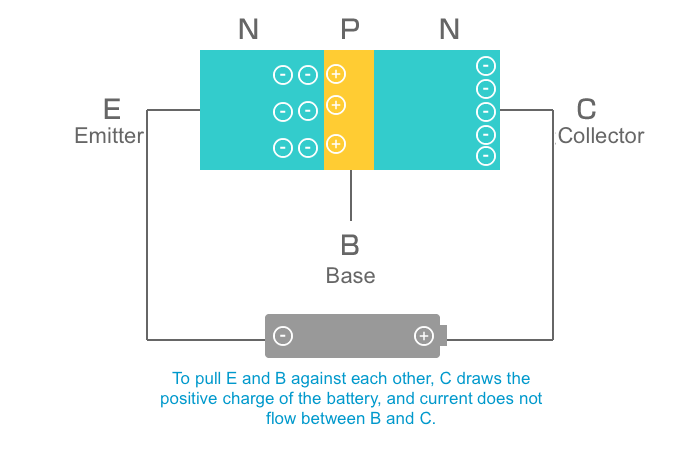 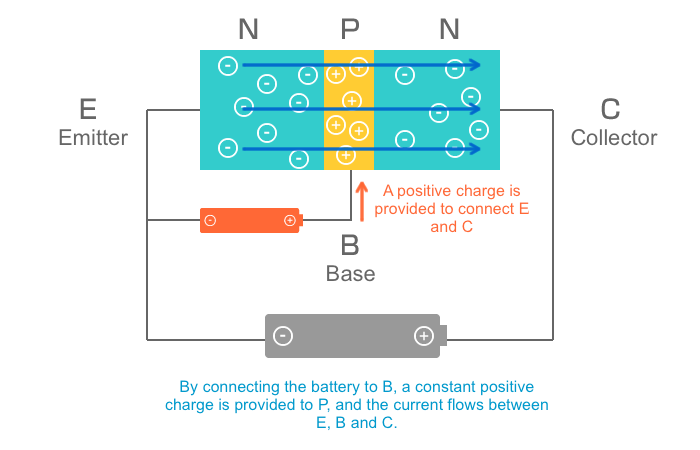 As explained in the beginning, the semiconductor used in the base of the transistor is very narrow and only a weak current can pass, so the electricity flows from the fully loaded emitter through to the collector. This is why a weak current (the orange battery) can control a strong current (the gray battery).

Now, let’s use a use a transistor as a switch. In electronic construction, this switch is called a relay circuit. According to the transistor specs, if the motor can handle current of 800mA to 1A. So, that should be acceptable. 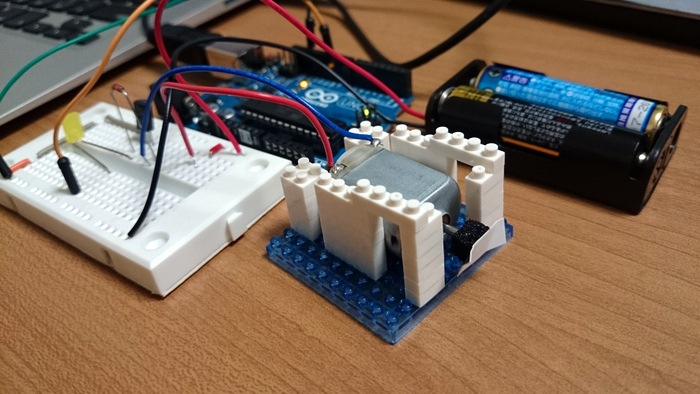 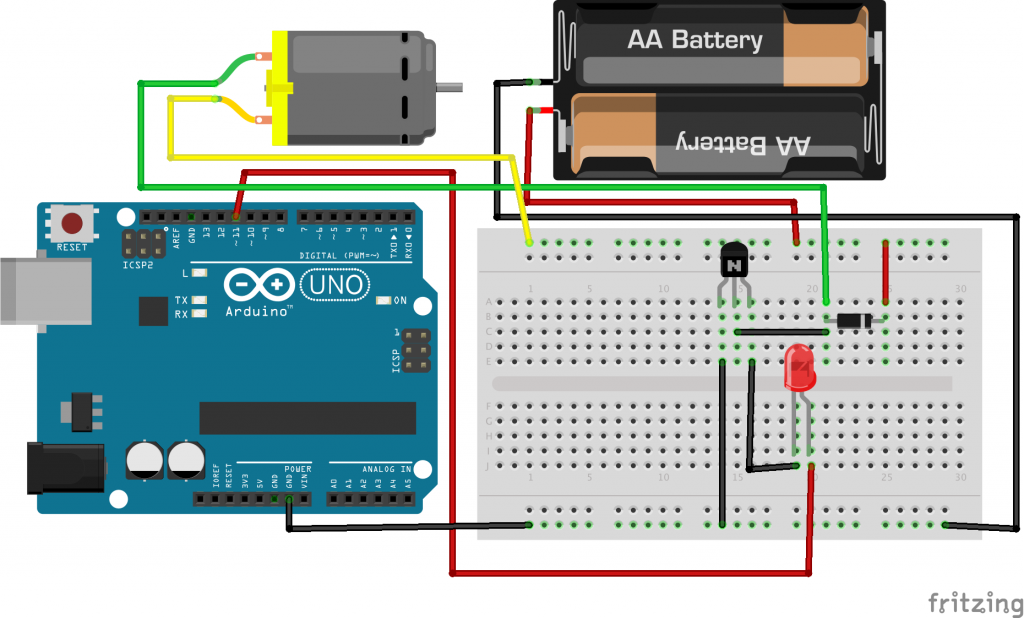 This program causes the motor to start and stop with 1 second intervals. When the output of pin 11 goes through a transistor, it causes electricity to run from the AA battery to the motor to make it move.

In this circuit, a diode has been placed before the motor. A diode regulates the flow of current, and allow to maintain a constant voltage. A diode only allows current to flow in one direction, so it is possible to use this to prevent a current from flowing in the wrong direction. By using this diode, we can protect the flow from reversing when the motor is under load, thus destroying circuits of the Arduino.

This time, we have learned how to operate a motor using a transistor relay circuit. However, we only used Arduino as an ON/OFF switch. Since we’re using Arduino, we’d like to be able to adjust the motor’s angle of rotation and operate multiple motors. Next time, we’ll delve deeper into motor operations.