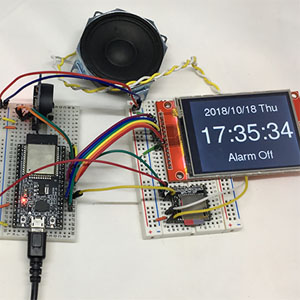 What alarm do you wake up to every morning? A common problem among morning folk is stopping the alarm and going straight back to sleep.

This time, we decided to use ESP32 to make a “wake up alarm clock” that should help solve this problem.

*In addition to the items above, one tact switch, one LED, and one resistor of about 100Ω will also be needed. 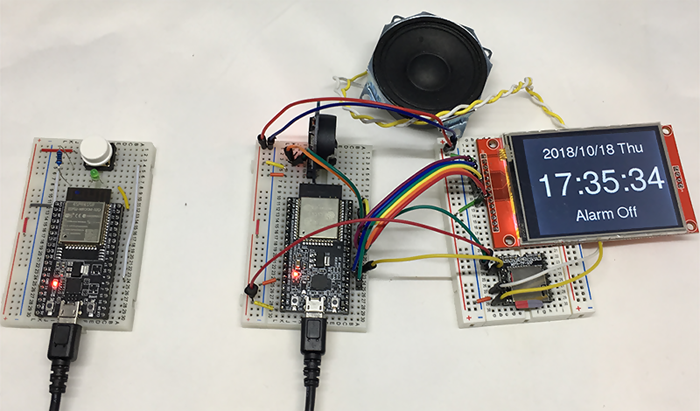 To place the main unit and extension away from each other, use the ESP32 Wi-Fi function. The two ESP32s operate as web servers and clients, and communicate with each other as shown in Figure 1. 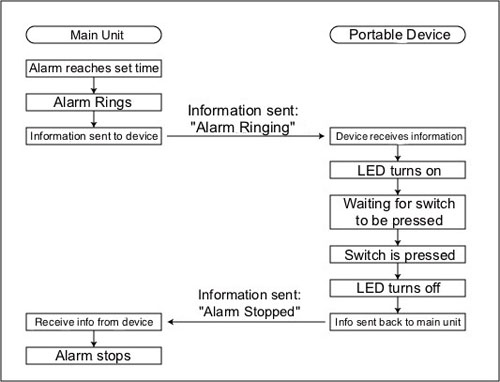 Fig. 1 Transmission between the body and extension

“RTC” for making the date and time tick

For microcomputers such as Arduino, it’s common to be able to get the elapsed time upon booting up the program. However, the time you get is often not very accurate, so the elapsed time will reset when the power is turned off.

With ESP32, you can connect to the internet via Wi-Fi to get the date and time periodically from an NTP server on the internet and set it on ESP32. However, some microcomputers, such as Arduino Uno, don’t have an internet connection function, so it would be useful to have a mechanism that could handle date and time easier.

That’s why an IC called “RTC” (Realtime Clock) is commonly used. An RTC is an IC that makes time tick based on elements that are periodically signaled. In addition, by connecting it to an external power supply such as a battery, time can be maintained even while the power to the microcomputer is switched off.

Numerous products are in RTC, but this time, we’ll be using an RTC that’s been made into a module called “DS3231.”

The DS3231 module is popular among the RTC modules used in electronic work, and it’s readily available. Since the connection is I2C, only four wires are required. In addition to the RTC function, there’s also a temperature sensor function (however, the temperature sensor won’t be used in this article).

In addition, on the DS3231 of Photo 1, a button battery called “LIR2032” is installed so that the date and time will continue to be recorded even when the microcomputer is turned off. LIR2032 is the same battery size as CR2032, except that it’s rechargeable. 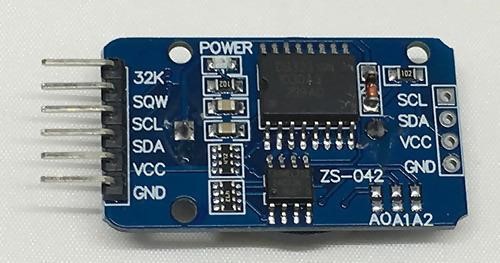 Date and time displayed on the LCD

There are different libraries and different programming methods depending upon the device. It also depends upon whether it’s suitable for what you want to make. For example, a 7-segment LED is suitable for displaying only numbers at a low cost, but won’t be suitable for a detailed display. Among the above, the graphic LCD display is the most versatile and can be used for many different projects, so we decided to use it for today’s demonstration.

There are various types of LCD display modules out there, but for today’s project, we’ll be using a controller mount called “ILI9341” and be using an SPI connection (Photo 2). In addition, LCD displays are commonly sold in 2.2-inch/ 2.4-inch /2.8-inch sizes, so adjust accordingly to the type of work you’re doing. 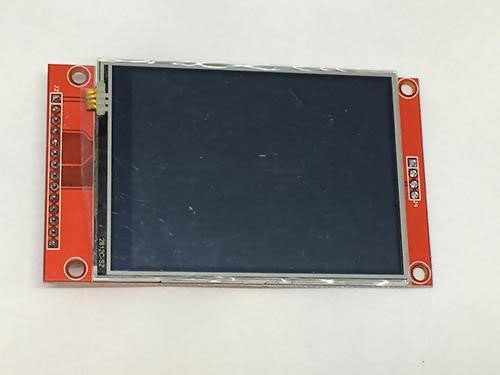 Make an audible alarm with the MP3 module

Since it’s an alarm clock, having a sound ring out at a specified time is a necessity. You can connect a buzzer to the ESP32 to produce a single sound, but if you’d like, you could also use your own favorite sound. For that, we’ll be using a module called “DFPlayer Mini” that can play back any MP3 data (Photo 3).
DFPlayer Mini is a module that can play MP3 in a microSD card by sending commands via a serial connection. A small speaker can be connected to the speaker output pin to produce sound. 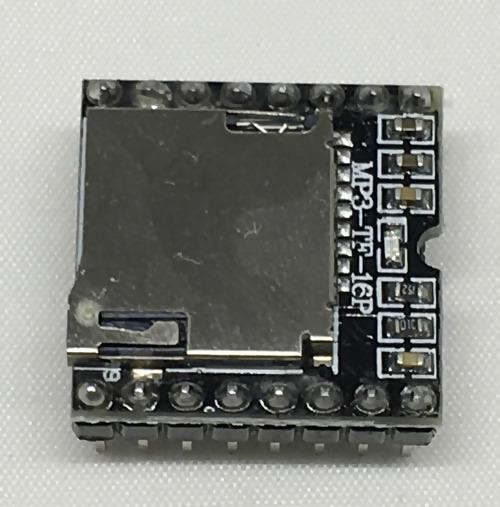 Let’s get into the actual production. First, wire the alarm clock.

Use two breadboards, one with ESP32 and DS3231, and the other with LCD and DFPlayer Mini. The wiring of each part is as shown in Figure 2.

Since the ESP32 is wide, you can only put a jump wire on one side of a normal breadboard. Therefore, use a breadboard with only one side of the power line and one row of holes instead (such as SAD-101 from Sanhayato).

DFPlayer Mini connects serially. ESP32 can use three serials, but for this, use the combination of 16th pin and 17th pin (Table 3). Also, connect speakers to the DFPlayer Mini “SPK1” and “SPK2” pins. 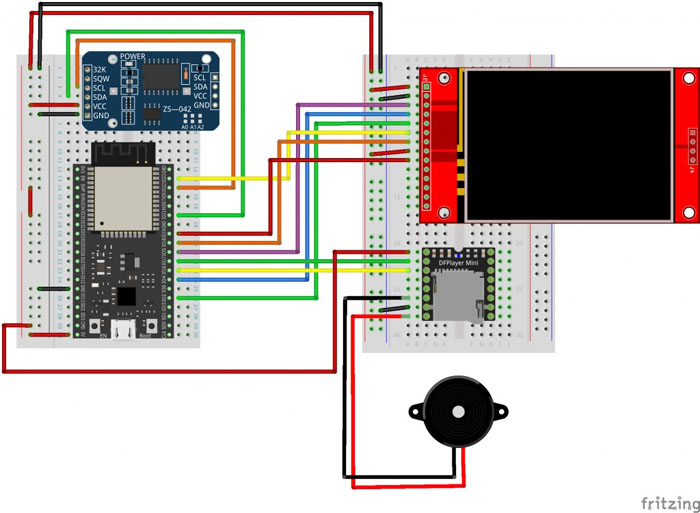 Table 1: Connection between ESP32 and LCD

Next, we’ll be doing the wiring for the extension. The wiring for this should look like Fig. 3. All you have to do is connect the switch and LED to the ESP32. Connect one side of the switch to the 3V3 pin of ESP32 and the other side to pin 4. Connect to GND via ESP32 pin 13 via resistor → LED.

On the circuit that reads the switch status, insert a pull-up resistor or pull-down resistor. However, since the ESP32 can perform pull-up/pull-down with an internal resistor, the external resistor is omitted. 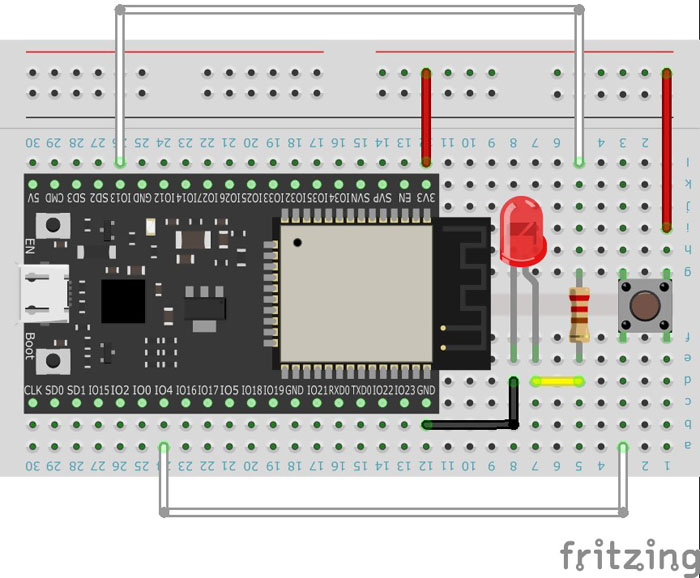 When you finish working on the circuits, you can create the program. First, start with installing each of the below libraries.

The installation procedure is as follows.

There are several RTCLib and DFPlayer libraries with similar names. RTCLib installs “RTCLib by Adafruit” while DFPlayer installs “DFRobotDFPlayerMini by DFRobot.” 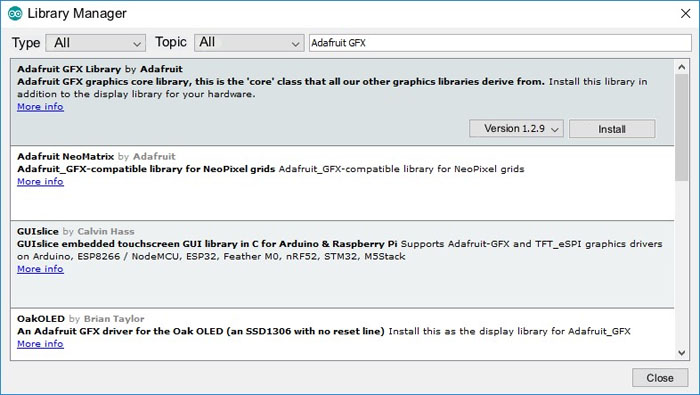 Additionally, install a font file to display the time in large characters. If you download and unzip the following zip file, you’ll get a file called “FreeSans40pt7b.h.”

Next, create an alarm clock program in Arduino IDE and write it to ESP32. The contents of the program are shown in Listing 1.

However, the 17th to 21st lines need to be rewritten as follows.

After the program has been written to the main console/extension unit, check the operation. The procedure is as follows.

To cancel the alarm setting, connect to the address “http: // IP address of the machine/” with a web browser and click on the “Alarm Off” button.

You can connect to the ESP32 network via Wi-Fi. On top of being able to connect to the internet as with today’s example, you can now connect to a wide variety of electronic work on the network.