Today we’ll be making a smart garden system using the ROHM Sensor Evaluation Kit. In this project, we’ll be combining the proximity/ambient light sensor (ALS) with other sensors to operate the plant growing device!

In addition, we’ll be using Arduino Create to program the system.

Arduino Create is an all-in-one online platform that enables you to write code, configure boards, share projects, and it was officially released on August 18, 2016. 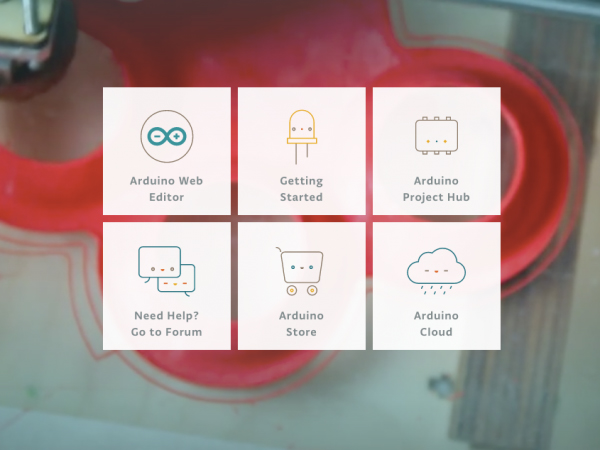 Arduino Web Editor is an online editor that users can use to write code and upload sketches to any Arduino board from your web browser.

Arduino Project Hub is a tutorial platform provided by hackstar.io. The Hub features a vast array of projects of varying degrees of difficulty and popularity.

By using Arduino Cloud, users can manage projects from the cloud via the Internet. The Cloud implements Amazon’s cloud computing service to provide users with a secure development environment.

※ Rohm sensor evaluation kit can be purchased from the following site!

The first step to making a smart garden system is deciding what to incorporate. How would you use sensors to create a useful device for growing plants? Let’s look at the detailed roles and usage of various sensors and their potential use in this project.

The Sensor Evaluation Kit offers 8 different sensors. Which sensors should we incorporate to the plant growing system? Let’s go over each sensor’s functionalities and see what kind of sensors we can use for the system.

Based on the rundown of the sensors above, it looks like we can combine several sensors for added functionality. So which sensors should we incorporate? 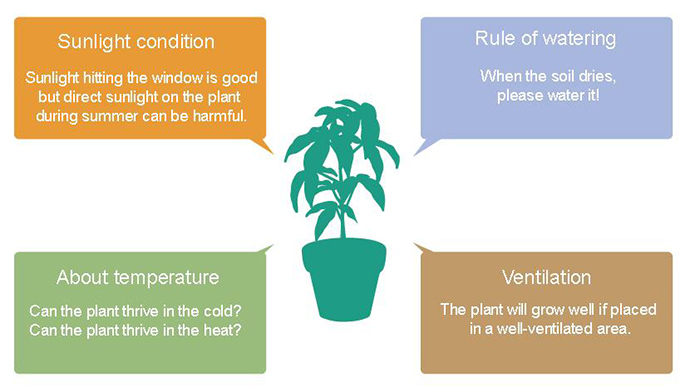 As briefly described in Figure 2, some conditions must be met to grow healthy plants. In general, plants grow the best in well-ventilated areas with lots of sunlight and warm temperatures. And, of course, they need water.

Based on this information, we can narrow down our choices of the sensors:

Speaking of plant growing devices… There are people who have already made large-scale plant growing systems. For example, there’s FarmBot. It looks like a huge laser cutter or 3D printer by its appearance. As you can see in the video below, the machine can also help by planting seeds, and it looks like you can control the planting on the PC or via a mobile app. It’d be harder to manage and control these devices outside for a long time, especially during severe weather conditions. Regardless, these are some really cool devices that have great potential to improve sustainable agriculture.

We’re going to start off by writing some programs using Arduino Create. 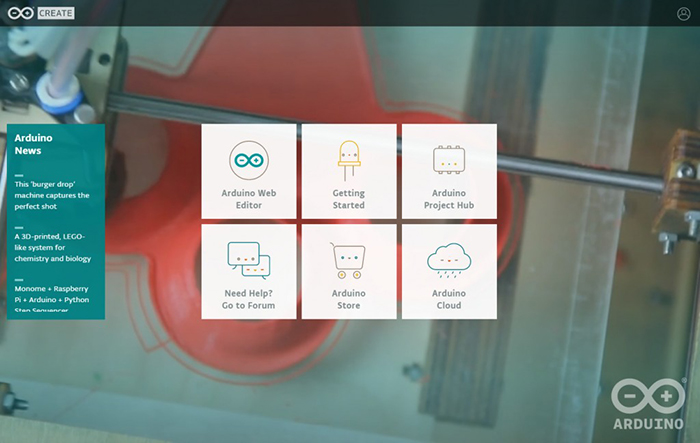 Getting started with Arduino Create

We’re going to walk step-by-step through how to use Arduino Create. The beauty of Arduino Create is that you can straight out write codes online in your browser and share them online (e.g. on social media, etc.). Normally, if you were to use Arduino you would have had downloaded and installed Arduino IDE on your PC, but that’s not the case for Arduino Create.

What’s the main difference between the PC version and the web version?

Arduino Create is extremely useful. The only downside is that you have to be connected to the Internet to use the Web Editor. Otherwise, you won’t be able to use it. That’s pretty much it. In this case, you can simply use the existing Arduino software on your PC. 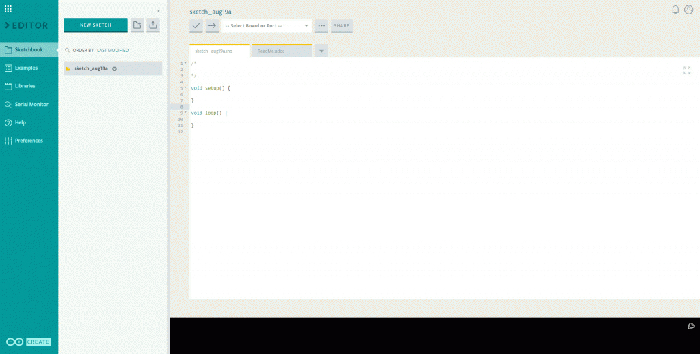 You can see that the editor opens in the browser. One thing I noticed was that the menus are much easier to see and locate, compared to Arduino Software IDE. Sometimes when you use the IDE on your PC and you open up too many windows with lots of sketches, it gets really cluttered and somewhat disorganized, but with the editor, you can stay organized and easily locate files.

Menu bar is located on the left-hand side of the editor. 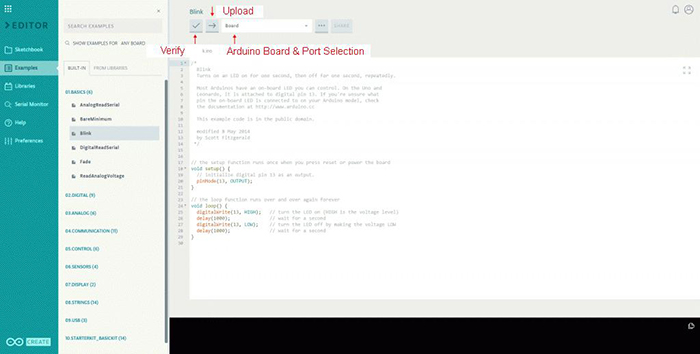 Let’s check some frequently used functions. Let’s start with “Blink.ino” (from Examples → BUILT IN →  01.BASICS → Blink). Select Arduino board & port you’re trying to connect using the drop down menu on the upper center of the screen. Then, click “Verify” → “Upload” (as you’d normally do in Arduino Software).

Next, we’re going to add Sensor Evaluation Kit library. To add the library, you can upload the zip file by selecting it from “Libraries” on the left menu and clicking on “ADD ZIP LIBRARY.” You can then complete by selecting the zip file of the library you want to add. You can download the Sensor Evaluation Kit library (zip file) from here for each sensor. 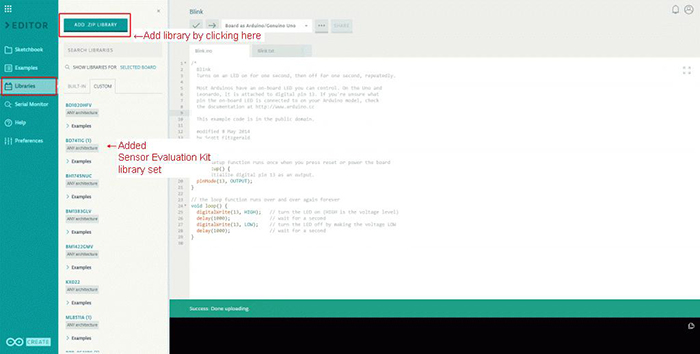 The Sensor Evaluation Kit has been successfully connected. Now let’s do some wiring and programming!

I want to make the specification of the device as follows:

→ Use soil sensor and water spray!

→ Use LED to trigger alert! (Maybe we can implement over the network notifier in the future!)

→ Use servo motor to operate the fan 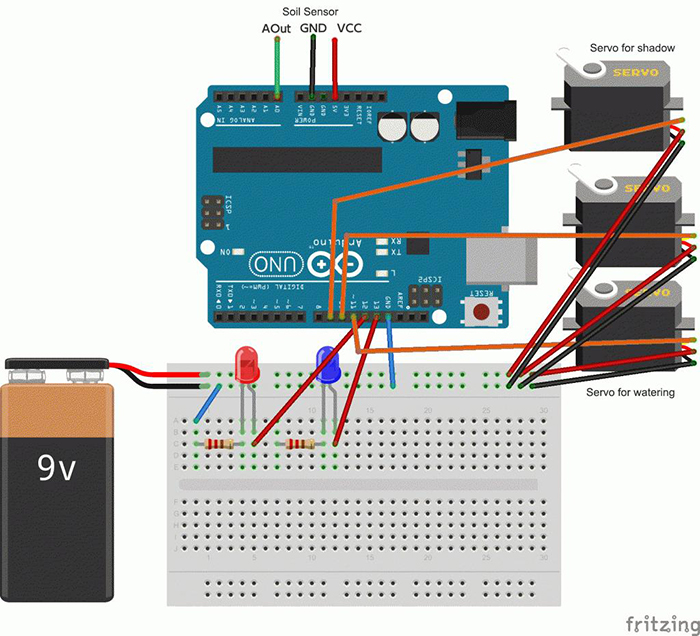 Figure 7. Circuit diagram (It is assumed that the Sensor Evaluation Kit is already connected to Arduino)

As for the program, after acquiring values of each sensor in the first half of loop, we’ll activate servos and LEDs according to the value of each sensor. Since the threshold at which each sensor activates differs depending on the size of the plant, please adjust the values to your preference.

Now that wiring and programming is done, let’s put the system together. 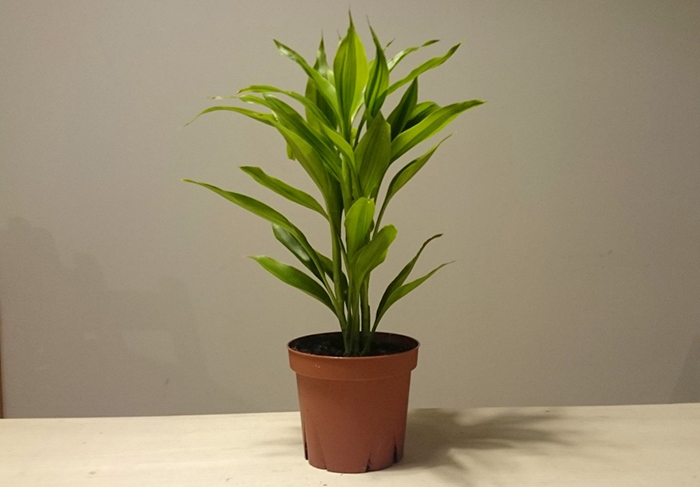 First, you need a plant (of course)! 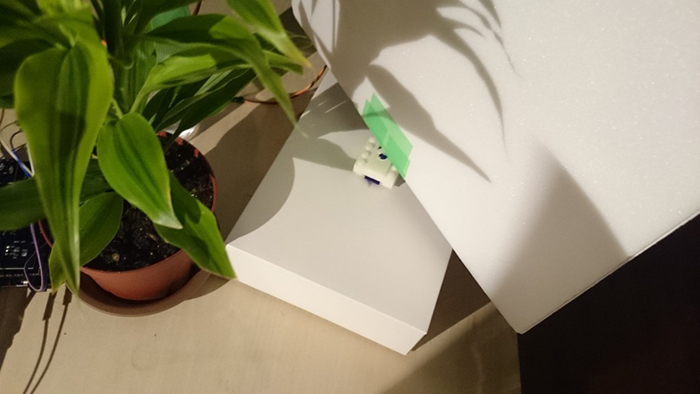 When the ultraviolet light becomes too strong, the shade panel attached to the servo motor will rotate 90 degrees so that it blocks the sunlight from the window. 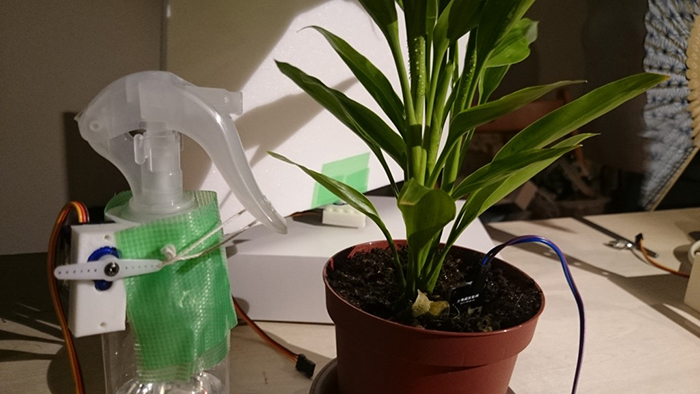 Depending on the moisture level, the water spray will be activated by pulling the spray with a servomotor.

There’s still plenty of room for improvement. If you want to make it more high-tech, it may be a good idea to use a small water pump, PC fan, etc. Also, if there are no windows in the room, it could be possible to combine the LEDs with the illuminance sensor and turn off the LEDs for plants as the room gets dark.

In this project, we combined the Sensor Evaluation Kit to power the smart garden system. There are some cool plant growing devices out there (as briefly introduced in the tutorial) and I believe this tutorial could serve as a stepping stone toward developing more advanced plant growing devices.

In the next tutorial, we’ll cover Arduino Create in a little more detail and also try the accelerometer from the Sensor Evaluation Kit.