The Basics Of Arduino: Control LED Lighting with Digital Output

Devices Plus introduced a variety of applications and examples of Arduino, but basic knowledge is still important for making anything!

So, this time we’ll be delivering the basic “key” to Arduino electronics. Mr. Kazuhiro Fukuda, who is famous for Arduino introductory book, will be instructing throughout the article.

This time, we’ll explain the digital output that can be switched on and off with Arduino, and introduce how to create a digital output program using LEDs.

In addition, to use electronic parts, it’s important to understand terms related to electricity, such as “voltage” and “current.” If you don’t understand the meaning of these terms, you won’t be able to determine whether they’re suitable for your intended use when purchasing electronic components.

Arduino has socket-like terminals arranged one above the other as an interface for connecting and controlling electronic components. Various controls are possible, such as connecting an LED or motor here to control the operation, connecting a switch or the like to determine on/off, or connecting a temperature sensor to measure the room temperature.

The digital input/output terminal outputs have two states: “high state” and “low state,” to operate the electronic component and check the voltage state.

On the other hand, the analog input is a terminal that can input a continuous voltage change. A number is assigned to each terminal, and this number is specified when the electronic components are controlled by the program. 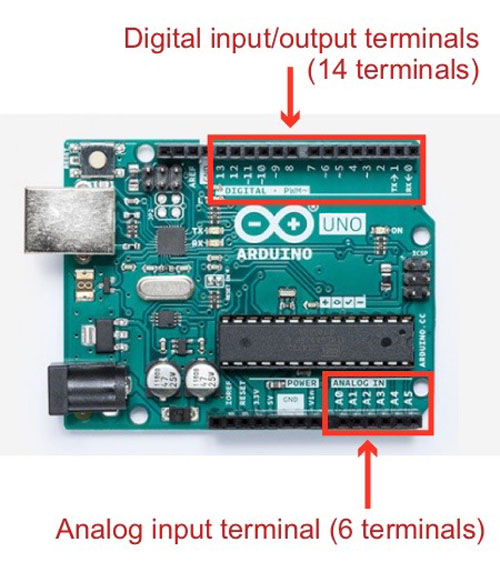 Digital output is an interface that can change the state of each pin from a program. You can freely switch between two states: “High” or “Low.” For example, if an LED is connected and the voltage is high, the LED will turn on. Conversely, if the voltage is low, the LED can be turned off. 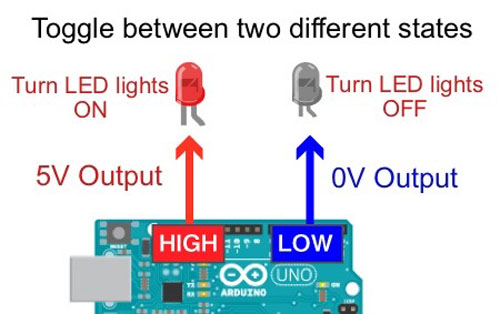 Lighting up LED on the program

Let’s turn on the LED by controlling the digital output with a program. This section describes how to turn on the LED connected to the 13th digital input/output terminal. Create the program as follows. Create a program, write it to Arduino as explained previously, and check that the LED lights up.

Lines 4 and 8 are important when controlling digital output. In digital input/output, there are two methods of use: “digital output” that can change the terminal status and “digital input” that reads the terminal status. For this reason, it’s necessary to specify in advance the setting to use. This setting is “pinMode ()” on the 4th line.
pinMode( LED_PIN, OUTPUT );
In pinMode (), specify the target pin number and the mode to be used in parentheses. This time, since the 13th terminal is used, the target terminal is “13,” and when using the digital output mode, specify “OUTPUT.” However, since the terminal number is set to be used with the name “LED_PIN” this time, the target terminal number is specified as “LED_PIN” (described later).

Structure of the program

This section describes the contents described in programs other than digital output. The following description on the first line names the terminal number to which the electronic component is connected.
const int LED_PIN = 13
The interface that connects the electronic components to the Arduino is numbered. For example, “13” is assigned to the terminal to which the LED was externally connected last time. When actually controlling the LED, the number of the connected interface must be specified by the program. However, if you write the number directly on the program, it’ll be difficult to figure out what the number is, and it’ll take time to investigate if you modify the program later. Also, if the connection destination is changed, it’s necessary to change the location where all the interface numbers in the program are specified, which takes time and may cause other parts to be changed accidentally, resulting in possible malfunction.

Therefore, give a descriptive name to the interface number to which the electronic component is connected. Here, the name “LED_PIN” (variable name) is defined, and “13” is stored in the variable. After this, write “LED_PIN” if you want to control the LED. Note that “int” in front of the variable name represents an integer, and “const” prevents the variable contents from being changed in the program.

In addition, negatively charged electric charge is called “negative charge,” but in general, in an electronic circuit, we consider the state where a positive charge is moving through the circuit. 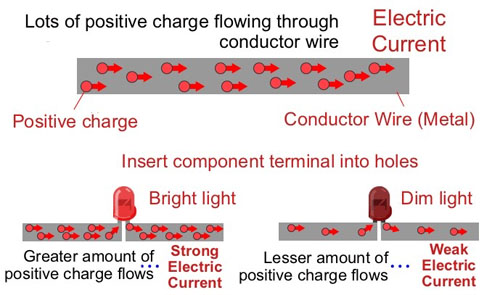 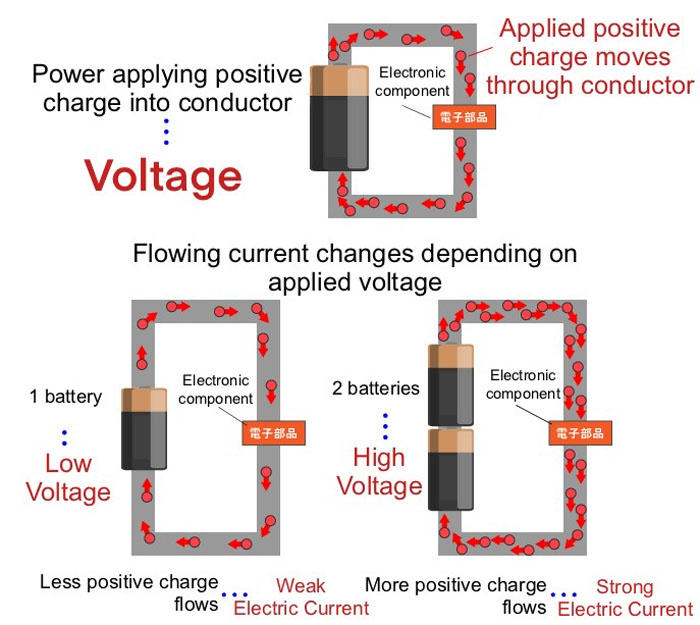 Many electronic components have a limit on the maximum current that can be passed, and will break if more current is passed. For example, if a current larger than the current that an LED can withstand is applied, the LED may emit smoke or become hot and eventually break. A broken LED cannot be used again. There’s also a risk of burns by touching a hot LED. 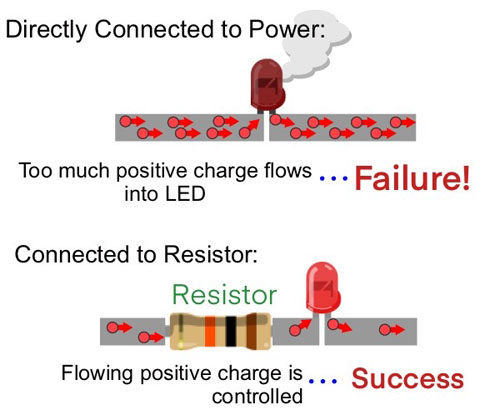 Conversely, if you want to pass a specific current, you can also determine the connected resistance value. In this case, it can be found by dividing the value of the current you want to flow from the applied voltage. For example, to apply a current of 10mA when a voltage of 5V is applied, the following formula is used. 10mA is 0.01A.

You can read more about Ohm’s Law here: Learn About Ohm’s law, GPIO, and transistors by simple LED circuit on Raspberry Pi 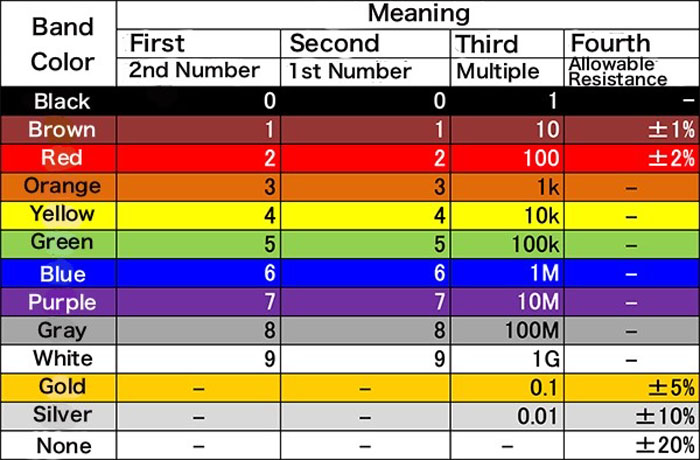 For example, a resistor printed as “Brown Black Red Gold” can be seen as a 1 kΩ resistor.

LED is connected to resistance and lights up

When using an LED, it’s necessary to connect an appropriate resistor to light it. It’s possible to calculate how much resistance is connected by simple calculation. When an LED and a resistor are connected in series and a power supply is connected at both ends, the resistance value is calculated using the following formula.

Also, if you want to light it darker than this, decrease the current value. At this time, the LED voltage hardly changes, so use the value of the forward voltage. For example, when a current of 1 mA is passed, calculate as follows.

This time, we explained the digital output method, voltage, and current. Next time, let’s change the brightness of the LED.