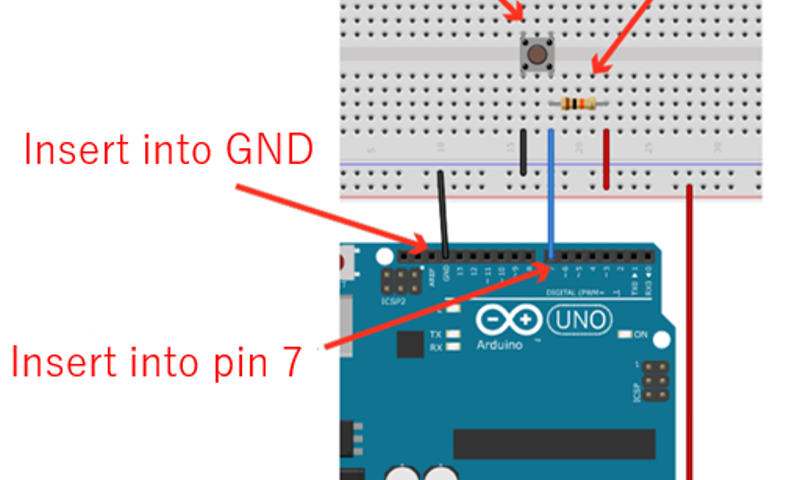 In this article, you can learn how to use tact switch in your Arduino project and how it actually works. 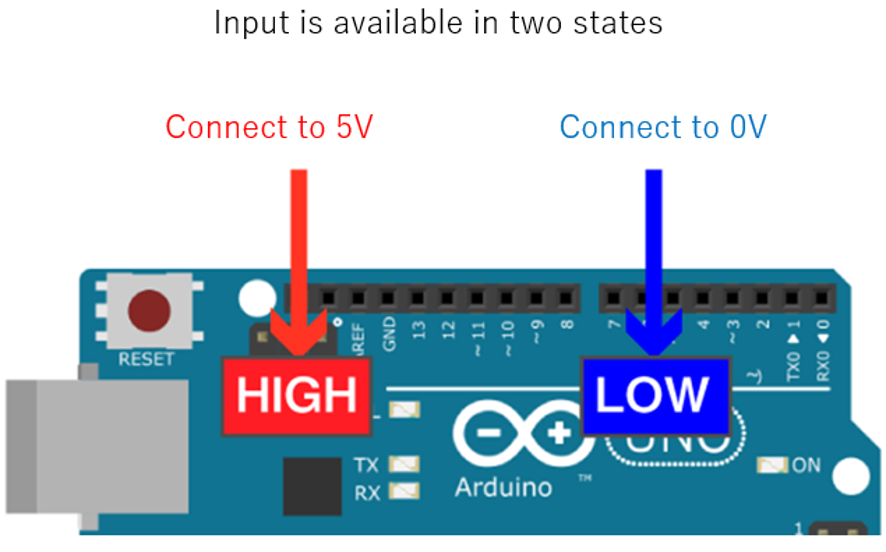 Actually, the state of the digital input pin is switched to 0V or 5V using an electronic component such as a switch.
This time we will describe how to implement digital input using a switch.

With Arduino Uno, you can assign any of the pins D0 to D13, originally used for digital output, as digital input. The pin states can be checked by switching to the digital input mode programmatically.

The input is “LOW” at 0V or “HIGH” at 5V. The program reads “0” as LOW and “1” as HIGH. You can use these input values to control the operation via processing such as conditional branching after checking them.

Let’s actually try digital input with Arduino. Here, let’s check the change when connected to the 5V power supply and GND using a jumper wire for pin 5. Create the following program and write it to Arduino:

In line 4, specify “INPUT” in pinMode() to switch pin 7 used this time to the input mode. You can now check the pin state from the program.

If you want to use serial communication in the program, initialize it with Serial.begin() (line 5). Specify the communication speed here. You can send data to the PC by specifying a value in Serial.println() (line 12). This time it sends the content of the value variable that stores the state of the digital input.

We have now confirmed that the input changes depending on the pin state.

Now, let’s use a switch to shift the digital input pin between HIGH and LOW. Use the push-button “tact switch” here. 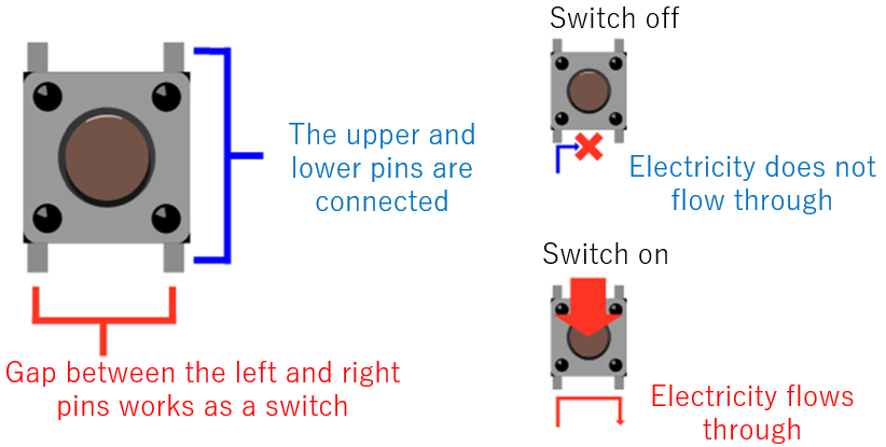 In the tact switch, when the top button is pressed, the internal circuit is connected and electricity flows through. When the button is released, the circuit is disconnected and electricity will not flow through. In general, the switch has pins mounted at the four corners. When arranged as shown in the figure above, the gap between the right and left pins works as a switch. The upper and lower pins on the right side and the left side are always connected.
Press the switch with one end of the tact switch connected to the pin and the other end to GND; the internal circuit is connected, connecting the pin directly with GND. By doing this, you can see that the digital input is “HIGH” by pressing the switch. 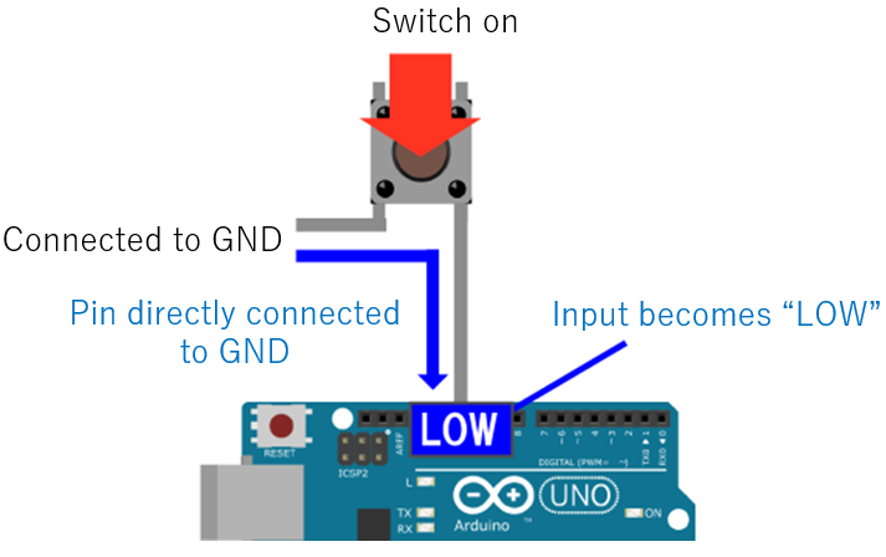 However, when the switch is not pressed, it means that nothing is connected to the pin. In such a case, the voltage applied to the pin becomes unstable. If it is unstable, the input may change if you touch the pin or put a battery close to it.
Therefore, we connect a circuit called a “pull-up” or “pull-down” circuit when using the switch. This method stabilizes the state by connecting the pin to the power supply or GND via a resistor. The circuit is called a pull-up circuit when connected to the power supply and a pull-down circuit when connected to the GND side. Here, we use an example with a pull-up circuit for explanation, but the principle is the same for a pull-down circuit.

Input data with a tact switch 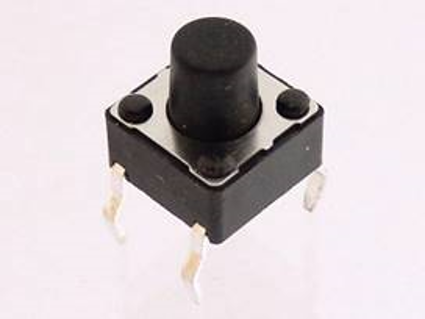 Tact switches are available in various colors. You can select any color that you like.

Resistor used for a pull-up circuit. The color code “brown-block-amber-gold” is printed on 10kΩ resistors.

When you have prepared the components, connect them as shown in the figure below. Insert the tact switch across the groove in the center of the breadboard. 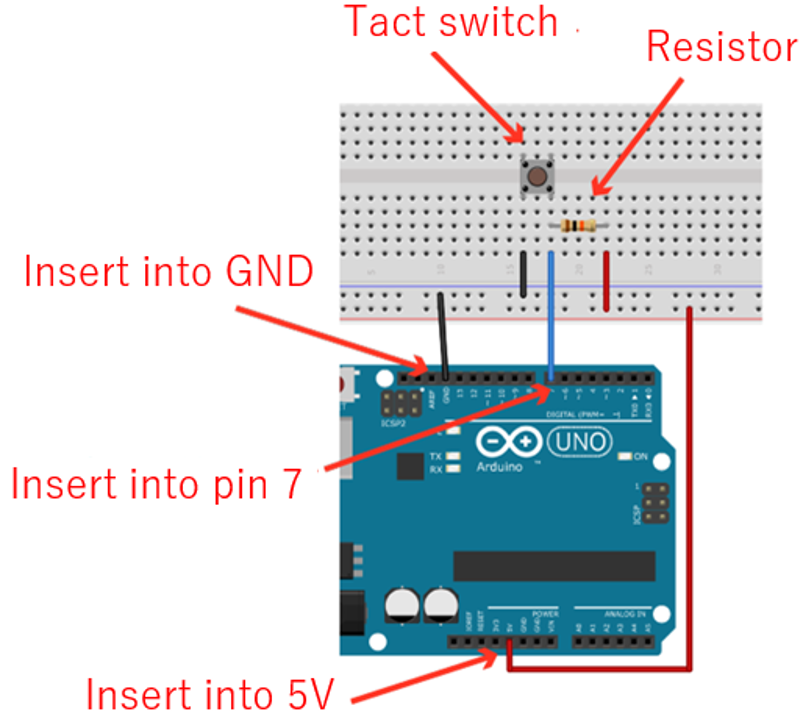 Next, write the program described earlier to Arduino to check the input of pin 7 in the serial monitor. The value “1” (HIGH) is displayed when the switch is released, and the value changes to “0” (LOW) when the switch is pressed.

Use the Arduino pull-up function

In Arduino Uno, the pins are equipped with a “pull-up” function, which can be activated programmatically. The internal pull-up eliminates the need to connect an external resistor. You only need to connect the switch, thus saving time and effort. 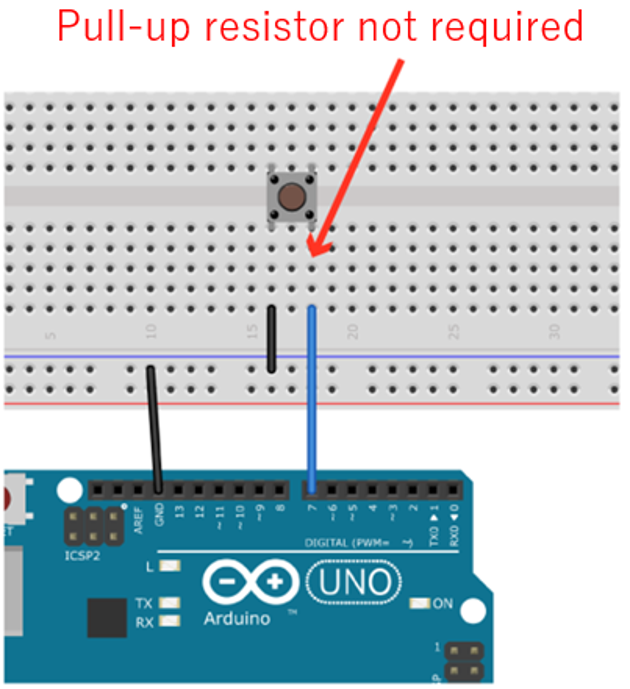 Write the following program to activate the pull-up:

You only have to specify “INPUT_PULLUP” in the pin mode setting (line 4). It activates the built-in pull-up, thus stabilizing the HIGH input when the button is not pressed. Note that the pull-down is not installed.

Lighting an LED with a switch

And there we go! Now you can perform input using a switch in your Arduino project.

Explore the rest of this series to get to know about the basics of Arduino: