All About Robocon: The Robotic Contest from Japan 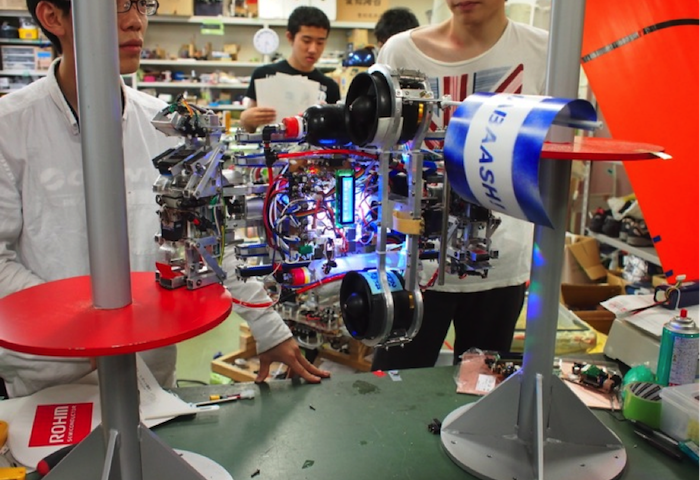 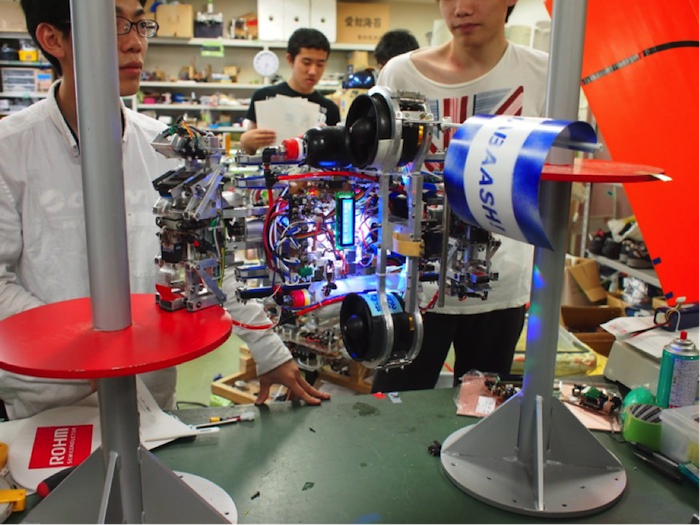 Every year, students all over Japan put ideas to work building robots for a competition, with a different challenge each year. The results of those ideas compete heavily, so imagination and creativity are the name of the game at this annual competition. Robocon, short for robotic competition, is where high school and college students from all over Japan experience thinking their own thoughts and building a robot with their own hands for competing innovative ideas. It is an event where the importance of things imagined and the wonder of building things is shared on a national scale, and 2016 marks Robocon’s 29th year. 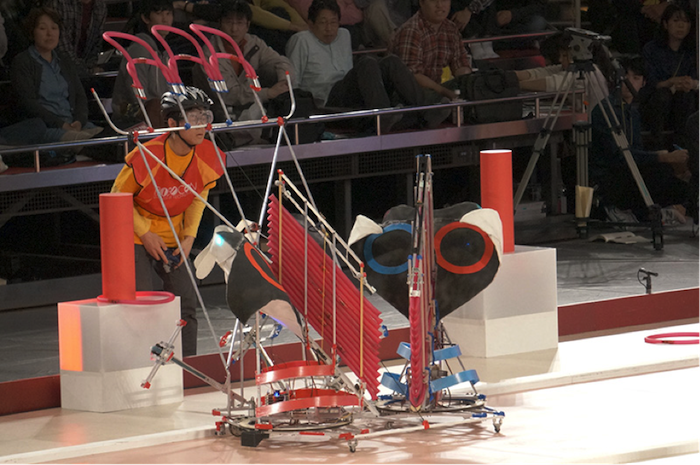 At Robocon, students from across the country put their ideas to use building robots aimed at a different type of competition each year. Since the product of their ideas are competing in this event, creative and imaginative thinking are the price of entry to this annually held tournament in which technical schools and colleges from all over participate.

Robocon is not only one event. Because of its popularity, it has expanded into series of competitions. Here is the list of the Robocon series:

Formally known as “Idea Competition/National Technical School Robot Competition”, Tech School Robocon brings 124 teams from 52 campuses from all Japan, representing 57 technical high schools participating in regional tournaments and 25 teams are selected to advance to the national competition. Since it began in 1988, it is a high level competition that has unfolded with imagination and creativity at its center where attractive robots are born annually.

Started in 1991, NHK College Robocon brings all colleges across Japan to participate. Since 2015, the scope of participation expanded and technical colleges and government schools began to take part so the name was changed to “NHK Student Robocon”. After passing a written interview and two separate video reviews, approximately 20 teams who are selected put their ideas and teamwork together to compete. The winning team gets to represent Japan at the global tournament “ABU Asia-Pacific Robot Contest (ABU Robocon).” 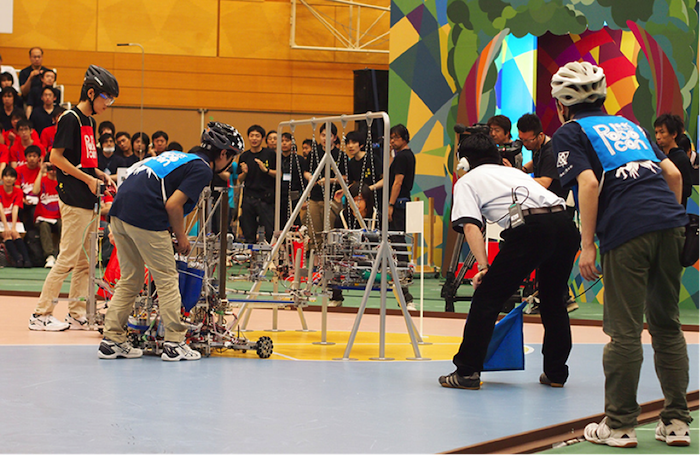 Officially known as the ABU Asia-Pacific Robot Contest, it is sponsored by the Asia-Pacific region’s federation of broadcasting organizations, the ABU (Asia-Pacific Broadcasting Union). The competition is held with the aim of cultivating passion and ability among young engineers for making and building things and to also develop interpersonal exchange. The first tournament was held in Tokyo in August, 2002. Every year, a different ABU affiliate TV channel hosts the competition, so the tournaments can show a wide variety of cultures from the different areas.

The theme of the 2015 competition was the motif of a badminton table. The challenge was to have two robots cooperating to volley a shuttlecock. A match was to see how long a rally could continue and the competition was fierce. Also, the unique hitting method of some robots was quite entertaining. If it was decided by a jumping smash, the excitement of the crowd would hit a peak. 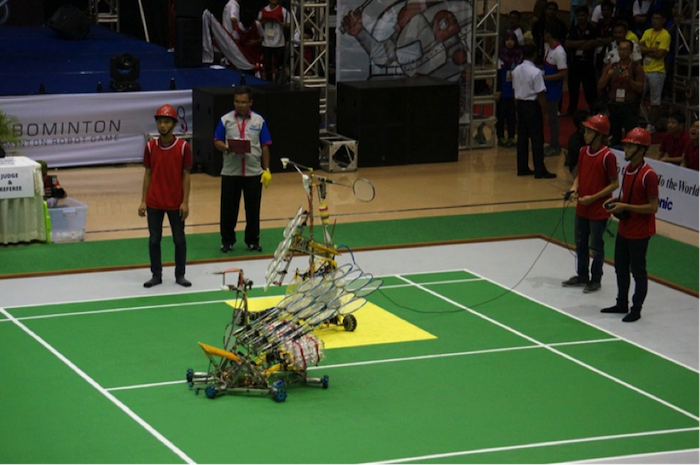 The theme of the 2014 competitions was “Rapid Food Delivery Service.” The challenge was to build a robot that delivered soba noodles. They competed on how long they could carry a bamboo steamer without breaking it. The below video is an example.

The team consists of three people and roles, the customer, the shopkeeper, and the operator. The customer decides the number of plates, the shopkeeper puts the soba in the steamer, and the robot and operator head for the customer. In the middle, there are obstacles, including a narrow slalom, rough road covered with blocks, and very steep inclines.

As you see, these past few years have had the most challenging themes, according to the participants. Let’s go into greater depth on the challenge and strategy to conquer that Robocon.

Keeping the dishes in place

The main challenge of this competition was probably to maintain the steamer regardless of any obstacles. Just like in real (classic style) meal delivery, the soba trays must be piled up high in the steamer, and thus the rule. You have to hold the steamer perfectly and must support the sides as it’s easy to drop. Suppressing or absorbing the shocks coming from shaking and vibrating in the arm that holds the steamer was a big task to accomplish.

The slalom, blocks, and hills cause this vibration though maybe the slalom isn’t a problem for any of the participants. Many ideas on how to cross the blocks appeared in the regional contests. The orthodox way was probably to combine ordinary tires with tank treads to get over the upper part of the blocks. So, when traversing the blocks, the idea is to raise up the tires and cross the top of the blocks on the tank treads.

Also, various elaborate mechanisms like four legs, large wheels, and even spiral shaped tires that used suction to get across the gaps appeared. (While streaming regional competition, one reporter said something about “It looks like a walking dinosaur…”

In the hilly parts, contrivances that suppressed shaking of the steamer are used. It was quite different, but one team used a counterweight to make an arm that worked like a steadicam. Cool, huh?

A strategy of how many plates could be carried is what separated winners and losers. The limit of carrying 30 plates at a time was nearly impossible. You want the robot to carry as many as you can, but the risks increases the more tray you add. The time penalty for breaking a plate is big. Do you aim to stack a bunch and do it all at once? Or do you do it little by little and avoid the risk? This showed each team’s strategy.

Also, you could prioritize speed and use the double delivery method, starting ahead by preparing the second amount of plates. That said, a match only lasts 3 minutes so this would seem to have a high degree of difficulty.

It’s not just about winning and losing!

Of course, the fun of College Robocon is not just about winning and losing. The contest’s formal title starts with “showdown of ideas.” Not only is attention paid to the ideas put into the mechanisms, but another part is the ideas that go into the exteriors. Things that give form to the spirit of engineering, regional specialties, and the spirit of one’s hometown. People pour their hearts and minds into coming up with ideas to decorate their robots.

Everyone is an “explorer” heading for a new continent. They will overcome obstacles with a robot and build a “fortress” with blocks as evidence of conquering this new continent. This competition’s theme has 2 new rules.

First, you can use tools and “ships” in the field that can be freely used. Second, you can build robots as many as you want with whatever the size you wish.

The challenge of College Robocon is the showdown of ideas, and going and thinking outside of the box and displaying the frontier spirit will be a critical component for contestants to be successful.

When College Robocon’s first tournament was held 28 years ago, robots were only in a few colleges and laboratories. Now, robots have entered into every corner of our everyday lives. We’re waiting for the robots that will open up a new era with surprising ideas.

Also, another highlight is when everyone uses self-made “symbols” in the competition. It’s always fun to see “symbols” that show off people’s home regions.

Ideas and technology that will enable robots to move with limited resources will be the challenge.

Eco-robots and Hybrid robots are the two types that can be built and Eco-robots can’t have any kind of actuator that would drive them.

A hybrid robot is what moves an Eco-robot. Hybrid robots use things like wind power or magnetism to move the Eco-robot without physically touching them.

Matches will be held with a color Red team versus color Blue team, and the battle time limit will be 3 minutes. The Eco-robot must cross 3 obstacle zones using a propeller. After the Eco-robot clears the 3 obstacle zones, the propeller is transferred to the hybrid robot who then climbs a pole and attaches the propeller to the top. The winner is the one who attaches the propeller to the top. The winner of the Japan competition will represent Japan at the ABU Robocon 2016 competition held in Bangkok, Thailand.

What kind of robot would you build?

Keep an eye on the events column as we will be updating it regarding upcoming Robocon events!