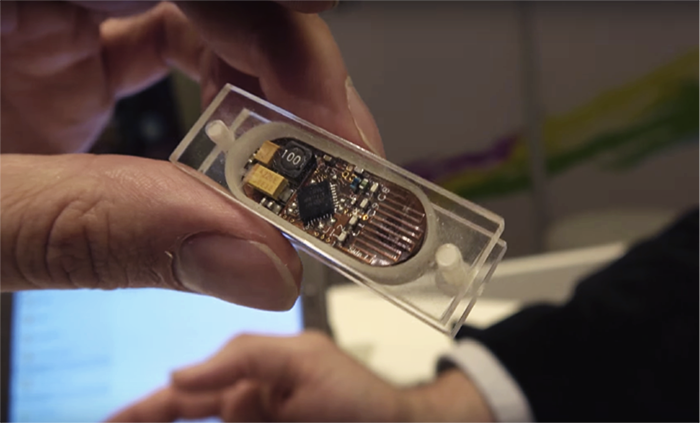 Technology often has an evolutionary drive to fit ever-increasing functionality into smaller packages. Computers once filled rooms, and now we hold even more powerful devices in the palms of our hands. Wearables (e.g., smart watches, fitness trackers/wristbands, medical devices, etc.) already require a smaller form factor by necessity, and wearable tech design continues to be driven by the appeal for further miniaturization. This creates difficult and unique challenges for integrating microelectromechanical systems (MEMS) into the next generation of wearables.

Wearables 2.0 are expected by consumers to be smaller, faster, and do more than their first generation counterparts. This means that developers need to find ways to add more sensors, power these devices more efficiently, and increase their microprocessing capabilities while designing for smaller and smaller form factors. The bar that was once set (to what seemed like impossible standards at the time) for wearable tech has now been raised.

A number of presentations at Wearables TechCon 2016 were rich in discussion of the present state and future expectations of wearable systems microdesign.  We’d like to share some significant concepts around MEMS design challenges and possible solutions gathered from the conference.

A Future Sense of Sensors

Sensors are the defining components of wearable tech.  They are what monitor our internal and external environments and provide the raw data that is converted into the meaningful feedback that we seek to enrich our lives. Gyroscopes, accelerometers, chemical sensors, optical sensors, temperature sensors, and microphones are just some of the sensor types utilized prevalently in wearable tech currently. 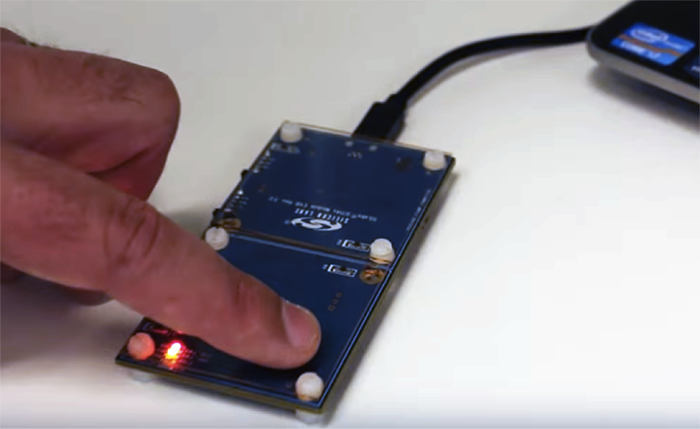 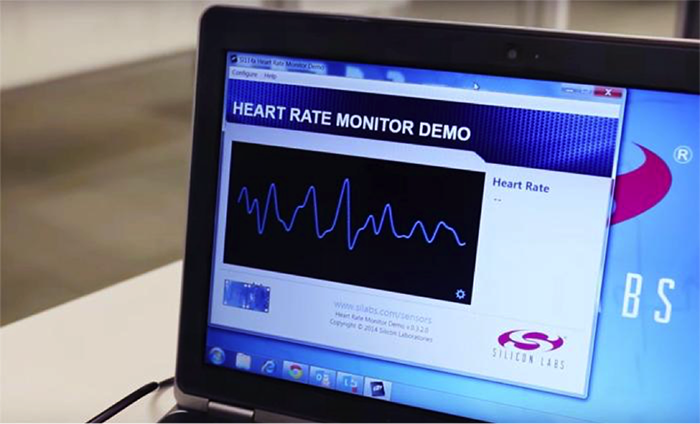 With a growing trend toward increased functionality, the number of sensors per wearable device is expected to increase in the future.  According to IHS Markit, wearables will contain an average of 4.1 sensors per device by 2020, an almost threefold increase. As sensory density is going up, PCB board real estate is ever-decreasing due to a drive for miniaturization. More sensors also mean more data transfer and integration, which can affect multiple areas of wearable functionality.

Some sensor manufacturing companies are responding to the the need for sensors to take up less space and use less current with low-power, integrated designs.

Kionix manufacturers low-power 3-axis accelerometers whose small footprint make them ideal for wearable tech and IoT development. At just 0.45 mm, the KXCJB-1041 is the thinnest sensor of its kind available on the market today. The motion wake-up feature of this sensor helps to reduce current drain. The KX112-1042 comes with an extra large embedded 2048 byte FIFO/FILO buffer and supplies accelerometer outputs with up to 16-bit resolution. It is packaged in a an ultra-small 2x2x0.6mm LGA plastic package. 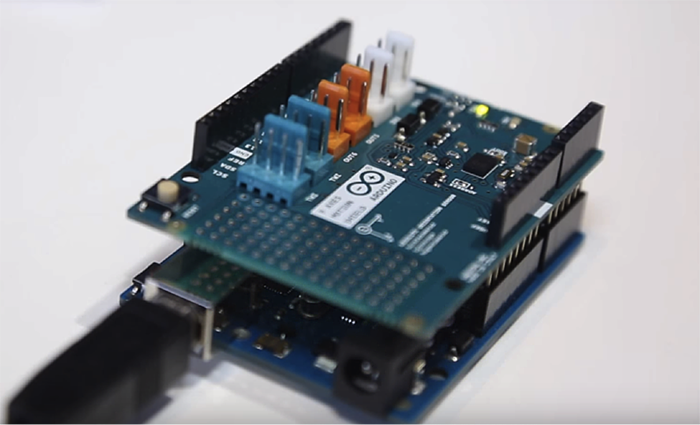 InvenSense has a dedicated line of integrated wearable sensor technologies, including a high performance 6-axis MEMS MotionTracking device (ICM-20602) which combines a 3-axis gyroscope and 3-axis accelerometer into a 16-pin LGA package. Invensense’s portfolio of digital microphones with MEMS sensors come in a small 4 × 3 × 1 mm package size or less, making them functional within the limited size form factors of wearables.

The design considerations associated with sensor demands will be a significant challenge in the future as the drive for miniaturization forces new levels of ingenuity. It is clear though that we are headed for a sensor-dominated world.  As Nick Langston of TE Connectivity put it when speaking on the panel about the future of the sensor market, “In the next 2–5 years, we will see sensors in things we wouldn’t even think about.”

The Power Dilemma: Beyond the Battery

Wearables require continuous, often real-time data monitoring. As mentioned previously, wearables will be developed with more sensors per unit in the future, which will require increased MCU processing capabilities. In addition, more advanced wearables offer multiple functionalities, such as cloud connectivity, graphic display, GPS, and voice recognition. All of these factors tax the power supply and contribute to a need for more efficient system. So how do you solve the power dilemma?

It is clear that batteries have size and functional limitations. It is impractical to hope that advancements in battery technology will result in smaller form factors that produce more power to any degree that will revolutionize wearable design. Future designs will likely have to look beyond batteries for the most effective power supply.

Exhibitor Delta Microelectronics’ IdemoLab offers a promising alternative to battery power through harvesting ambient energy. Their battery-less technologies include solar, thermal, kinetic, and RF energy harvesting solutions. Currently, these systems are mainly more utilized for battery backup in wearable tech and IoT but could possibly replace batteries all together in the future. Wouldn’t it be great if the kinetic and/or thermal energy created during physical activity powered your smart fitness tracker? Charging your device while burning calories seems extra productive to us! 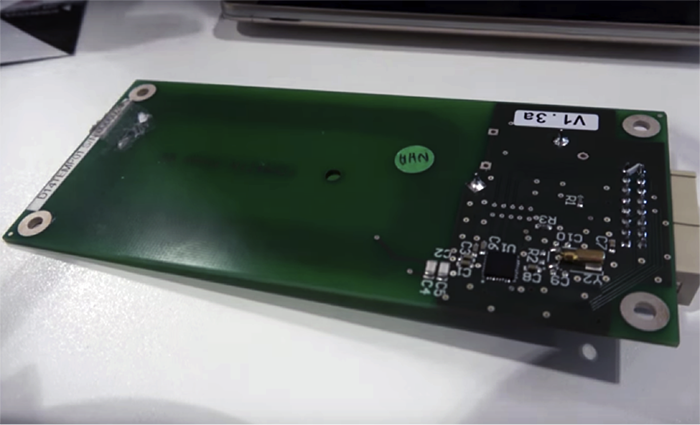 Figure 4. “THOR” by Delta Microeletronics is NFC data logger that can be powered passively by harvesting energy from an NFC field / ©IDTechEx 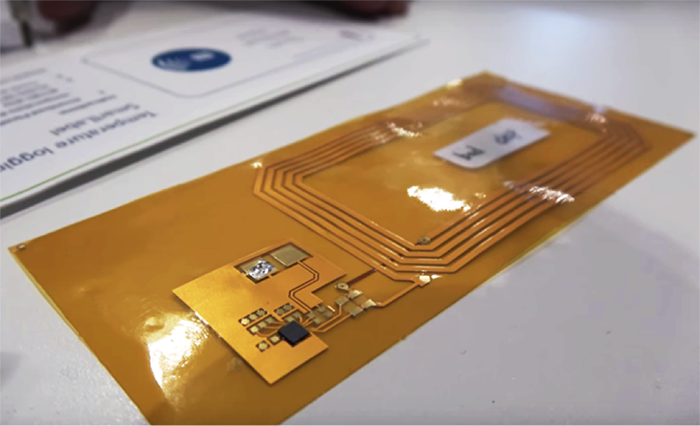 Powering wearables efficiently isn’t just about the power source; it involves building with components and architecture that reduce power drain as well. Some of the most significant power consumers in wearable microsystems include the MCU, wireless radio, and oscillators.

The advent of Bluetooth Low Energy (BLE) wireless radio systems has afforded substantial gains in power conservation. MCUs can be scaled down or integrated with other analog components, including RF transceivers, to decrease power usage. In addition, developers can use ultra low power chip components, which are more accessible than ever before.

In a session titled “Pushing the Envelope in Size and Power of Wearables,” Jehangir (JP) Parvereshi from SiTime shared how focusing on MEMS timing solutions can help conserve power in microdesign. Wearable SoC, like other mobile electronics, cycle between an active mode and low power sleep/standby mode. This cycle is orchestrated by the functioning of internal clock generators which have been traditionally made from quartz crystal. SiTime’s objective is to replace quartz components with silicon-based MEMs oscillators and embedded resonators. In comparison to quartz, silicon makes for more accurate and resilient timing systems. Increasing the accuracy of the timing systems reduces power consumption during sleep/standby mode, thereby extending battery life. SiTime’s μPower MEMS-based solutions can reduce MCU power consumption and BLE current drain by 17% and 25%, respectively, compared to quartz.

Can we just skip the hard part?

Many developers, individuals and companies, have already been hacking away at some of these major design challenges for years. Fortunately, those inspired by the hype around wearable tech that want to get in on this technological juggernaut don’t have to reinvent the wheel. There are numerous companies out there that manufacture their own embedded systems for rapid prototyping and wearable tech production. Creators merely need to ‘plug-and-play’ with some of these partnering services.

Companies that produce their own brand of chipsets or embedded systems were well represented at Wearables TechCon 2016. Speakers from these companies contributed helpful insights to the sessions and panel discussions on microdesign and promoted their products for wearable development.  We will examine just a few of the mentioned systems and discuss their key features. 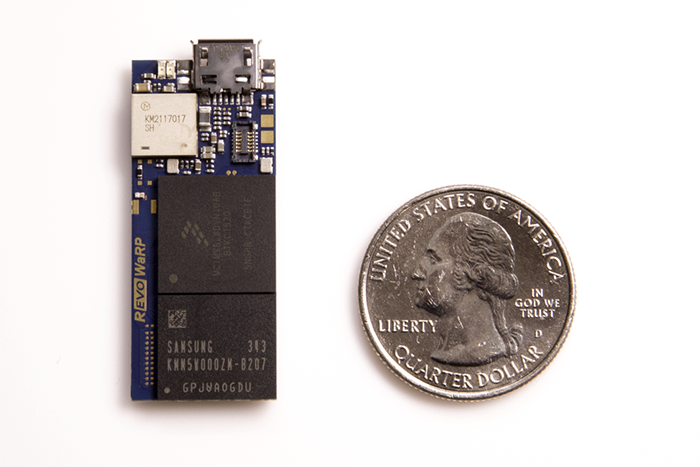 Sporting the tagline #buildfast, Warp involves a new architecture its creators refer to as Hybrid Design Architecture (HDA). This design allows developers to work with the power of an application processor (AP) while having the prototyping ease of a microcontroller (MCU). This is accomplished through combining both a core main PCB board (AP) with customizable MCU daughter board. Warp is an open source wearable reference platform. During its introduction to the Wearables TechCon community, the device was cleverly referred to as “Honey, I Shrunk Raspberry Pi.” 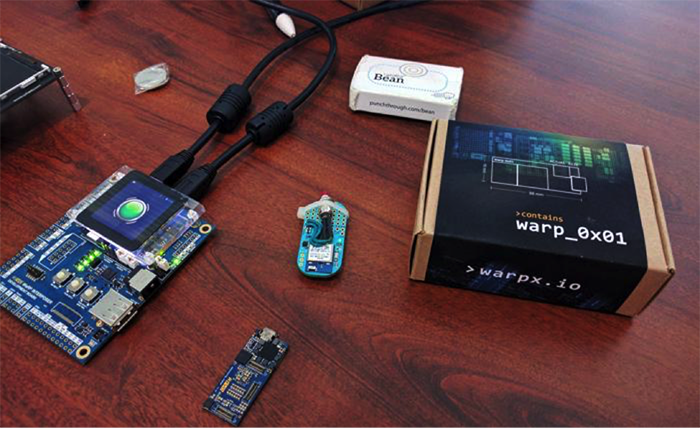 The Wyzbee Board is part of the complete Wyzbee IoT development platform launched by Redpine Signals.  The board includes Redpine’s Wireless Secure MCU, Bluetooth 4.1, and ZigBee connectivity, six-axis inertial sensors, USB ports, and many more features. The board also contains a proprietary expansion connector that allow for the integration of other peripheral symbiotic devices, such as additional sensors, GSM, GPS, touch display, audio, and rechargeable battery. When combined with Wyzbee Things, Workbench, and Symphony, the platform offers a one-stop-shop for IoT development. 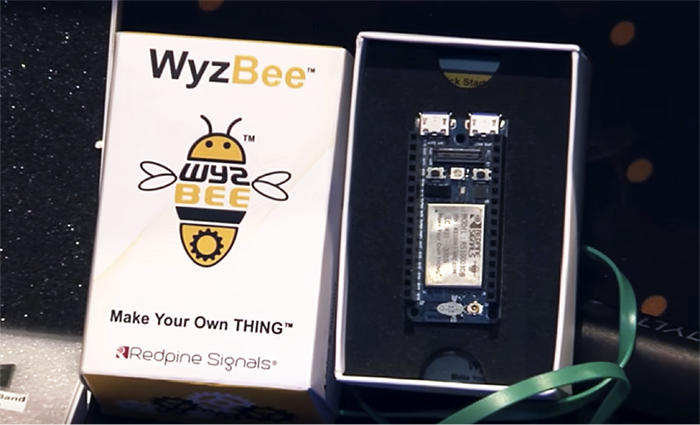 Heart rate monitors and accelerometers can measure effort for aerobic or high-impact activity but are not suited to offer insight for non-aerobic fitness activities, such as yoga. Maxim Integrated has responded with an embedded system for fitness wearables that measures Galvanic skin response (skin impedance) and surface skin temperature, allowing for effort to be tracked in all types of fitness scenarios. The platform is built with a rechargeable lithium ion battery, BLE for low power communication to an Android device, and an highly integrated MCU (MAX32600) with an ARM Cortex M3 core. In addition, the MCU comes with multiple op amps, multiple low power modes, and embedded security. The system comes as a complete wrist-worn unit and offers developers another dimension of fitness tracking functionality that may be missing from traditional heart rate monitoring and gait tracking wearables. 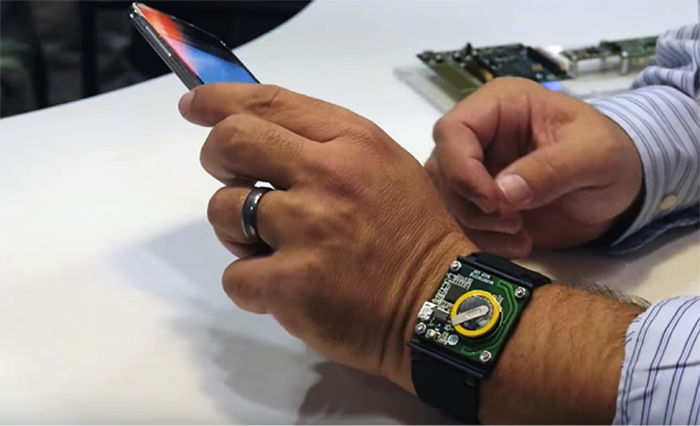 This is a complete development platform offering full support with an array of proprietary chipsets, RTOS and API, SDKs, and HDKs. In particular, the Assist 2502 platform is designed specifically for development of wearable form factors. The hardware core of the system is the highly-integrated MT2502 chip known as Aster along with companion GNSS and Wi-Fi chipsets. At 5.4mm x 6.2mm, Aster is the smallest system-on-chip (SoC) for wearables and IoT currently on the market according to MediaTek. The SDK for this particular development platform in the LinkIt product line comes with a plugin for Eclipse IDE for a feature-rich programming experience. 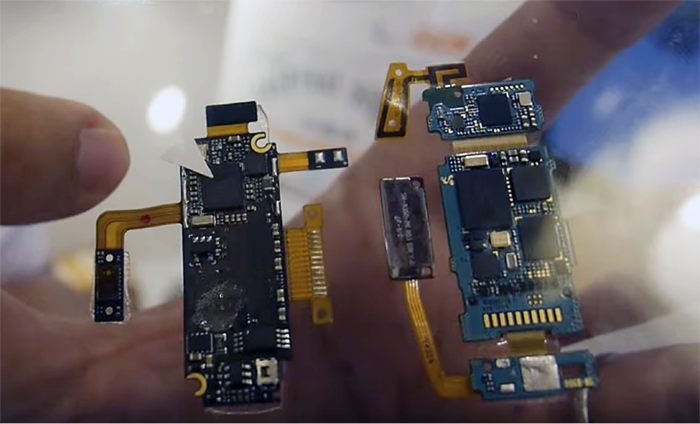 In the race to exceed consumer expectations of size and functionality, wearable tech has many challenging hurdles to overcome. Developers are turning to reimagined MEMS system architecture and alternative power supplies for the answers. While incremental gains are currently being made, the future could hold revolutions in MEMS design that have yet to be imagined.