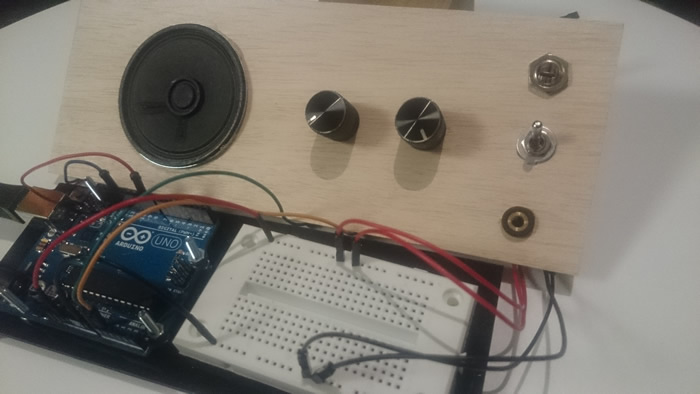 Last time, we used a tone function to produce a simple sound with Arduino. This time, we will take another step forward by using the Mozzi open source library  to program sound waves.

On Mozzi website, you can find many sound examples with samples and source code. After listening to various samples on their page, it feels like we can make our own electronic instrument.

Setting Up Mozzi with Arduino

Now, let’s set up Mozzi for Aruino. The Mozzi installation process is as follows.

On Arduino, different libraries can be installed easily using the same tool.

Download the Mozzi library from their website. To download, click the icon on the top-right of the page. You will be able to save a file named “Mozzi.zip”.
*The newest version at the time of was Mozzi-1.0.2.zip.

2. Adding the Mozzi Library to Arduino

Picture 4 Adding the library to Arduino

Picture 5 The Mozzi library has been installed on Arduino

If you are unable to install the library from “Add Library…”, unzip the Mozzi.zip file and check the folder for “Mozzi”. There is a folder called “libraries” in the folder where Arduino is installed. Directly add the Mozzi file, restart Arduino and then select “Sketch” > “Include Library”.

Once you finish installing the library, let’s try making sound with Mozzi. To make a sound, Arduino must be connected to a speaker. This time we will try to use a cone speaker.
With Mozzi, output uses the pin 9. So connect the speaker to the GND and to the pin 9. Also, the speaker does not have +/- polarity, so either GND is okay. But for speakers with cables like ours, one side is black, so we recommend you connect that one to the black GND.

After preparing the circuit, we can execute the program. To begin, let’s try using the “Basic” sketch program listed among the samples.
On Arduino, list the 02 Sinewave program included in Basics. When clicking “show sketch” from the below URL, you well be able to open the program, so copy and paste it to Arduino. This program lets us produce the same sine wave (beep) that we made with the tone function.

We made the same beeping sound as the tone function. We will use this program to explain Mozzi process.

Mozzi process flow is different from the standard Arduino one. Sound production and control are handled in between. These are the updateControl and updateAudio functions.

We can broadly divide this program into 3 parts. First, the part in blue includes programs needed to use Mozzi and Mozzi’s internal sound waves.
Secondly, the green portion declares program parameters and the settings for the sine wave oscillator used when producing sound output.
Finally, as detailed in figure 2, the red part is for Mozzi’s process.

Try changing the red part of the program with the number 440. This will change the frequency and the pitch of the sound produced.
Now, how can change the sound dynamically? Try running the below program.

Now that we have found our method for adjusting the pitch, let use it with a circuit. Prepare the following circuit:

We were able to take the place where the volume was changed in the previous program and change the volume variable resistance logical input value by connecting to the pin 0.

Now that we’ve learnt a bit about how to use Mozzi, let’s work on the appearance a bit. This time we used volume variable resistance. We could also use the previously introduced photoreflector or ultrasonic sensor to produce sound in the manner of a theremin. Try combining different sensors to make your own original electronic instrument.

Mozzi is a library that let’s you manipulate sound in an easy way. Many people are developing for Arduino. As people share their open source libraries, Arduino grows, and there is a circle where more and more interesting things come out.
Next time we will use an SD card with Arduino to try storing and reading sensor variables.