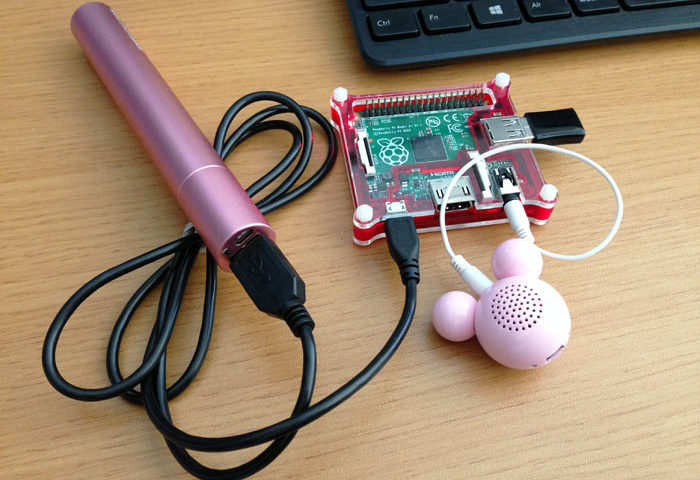 This time, we’re going to play with the Raspberry Pi Model A+!
What’s so great about the A+ model is that it’s designed to use less energy, and it’s battery-driven. Since it’s battery-driven, if you’re going to unplug it, you can unplug your display, keyboard and mouse too, freeing you from a web of cords! To do that, you need remote operation from a different console!
And that’s why this time, we’ve cooked up a way to operate Raspberry Pi remotely, wherever you like, using Raspberry Pi 1 A+!

About the Raspberry Pi A+

The shape is different than the Model B series we’ve been using until now. First, let’s check what it looks like!

It’s tiny and thin! It’s close to a square shape, but its roundness makes it cute!

We lined up the lastest (3/13/2015) model, the Raspberry Pi 2 Model B with the Raspberry Pi 1 A+.
As far as difference in appearance goes, there’s no LAN port, and only one USB port! Because it’s so small, it’s a product that’s really cut down its features to the bare minimum.
Since it doesn’t have a LAN port, you need to use USB to connect to a network. And, just like always, when connecting to a display to work in a desktop environment, you need a mouse and a keyboard.
To use this model, here’s what will do!

This is a self-powered USB hub. When you directly connect a USB device, it will use the power from the Raspberry Pi. But when using a self-powered USB hub, it will have its own separate power supply for USB. Hence, you can prevent power loss to the Raspberry Pi.
The USB hub I’m using has three ports for data transfer and another one for power charging. So, you can bring down your number of cords to just a single one.

Look at how it cuts down on cords!
Cords are always tangling and getting in the way, so this will solve the problem! Even when you use a different console, all you have to do is switch out the hub, which is convenient. We wish we’d installed this earlier!

We can look up their internal specifications too. On their open site’s document page, you can find a comparison chart of all the Raspberry Pie models.

This page introduces the Model A+. With this model, power consumption is reduced by 0.5W to 1W compared to the Model A, which comes in below 300mA (1.5W).

Preparing the Raspberry Pi Model A+

You can switch to the A+ with a micro SD card that was previously used by the B+ or  the Raspberry Pi 2 since they’re compatible with each other.

This time, we’ll start off with a fresh install! Instead of NOOBS that we were using until now, we’ll try using the Raspbian image file. We’ll explain briefly how to install it below.

Download RASPBIAN from the download page. When you unzip the file, you’ll find a single image file inside, which you can write to an SD card with programs like Win32 Disk Imager. (We’ve covered how to do that in a previous article)
Unlike NOOBS, it takes a little more time to get the SD card ready, but it cuts down on the installation process for Raspberry Pi. So, for those of you who are familiar installing it, this method will take a lot less time.

With NOOBS, you can configure the language settings before you install, but if you’re using the Raspbian image file you have to set it up using the command line.

When the Settings window with the blue background pops up, in this order first select ‘4. Internationalization Options’, then ‘I1. Change Locale’.

Next, we’ll set up the WiFi. For these steps, please refer to this previous article.
After rebooting it, it should automatically connect to the network. It’s a pretty solid connection, maybe because of the self-powering USB hub. Before, when we tried with B+, the connection was often lost part way through, but that might have been due to a loss of power.
It probably depends on machine environment as well, so if you’re not so sure about the stability of your connection we recommend using a LAN adapter.

Because it allows you to connect a LAN wire through an USB port, you don’t need to change your network settings.

First, let’s set up SSH on the Raspberry Pi side. The default setting should be on, but let’s confirm that.
Open the Settings window from the LX Terminal.

This is the screen to enable or disable SSH. To enable SSH, select Enable on the left.

If a window like this pops up, you’re done with the settings!

All the settings on the Raspberry Pi side are done now. You’ll need an IP address whenever you establish a connection from Windows, so let’s verify that now.

This time we’ll use a software called Tera Term and connect to the Raspberry Pi from Windows with an SSH connection.
This is a terminal emulation software that emulates a Windows environment. It handles SSH-1/2, UTF-8 display, IPv6, translucent windows, and more.

When you load Tera Term, you’ll see a window pop up like that in Figure 8. In the Host column, input the IP address you previously looked up and click OK.

If you’ve accessed it without a problem, the confirmation window will pop up. Here, you’ll type your Raspberry Pi username and password. For all the other settings, the default is fine.
Click the OK button and……

Up comes the familiar console screen!
Figure 10 shows the default user ‘pi’ logged in. You can execute the same commands as if you were directly operating Raspberry Pi. As a test, let’s call up the Settings window.

It displays the way it always does!
If you’re connected to the Internet, you can also use Tera Term to install packages. Even if no mouse, keyboard, or display are connected, you can operate Raspberry Pi, so this is really convenient!

If you only use command lines, an SSH connection is all you need. But if you want to operate it via the desktop screen you always use, you should use Remote Desktop Connection!

Use the Remote Desktop Connection that comes with a Windows standard install. On Windows 7 for example, you can load it from the Accessories tab in the Start Menu.

On the Raspberry Pi side, you need to install the xrdp package. Since you’ve made it this far, execute the install command while you’re still on the SSH connection.

After installation is complete, reboot the Raspberry Pi. This can also be done by remote operation.

After executing the reboot command, the Tera Term window will be closed. If the display is not connected, look and see when the Raspberry Pi machine’s ACT LED light stops, and judge whether or not it has rebooted. (Even if you try to connect before loading, it will just finish without finding an access point, so it’s not a big deal.)

The Remote Desktop Connection, just like Tera Term, will connect after you enter your access point and login information.

This is the login screen. For the Module column, you can leave it as the default value sesman-Xvnc.

When you log in, your desktop on Raspberry Pi will be displayed!
It’s easy to use a desktop that you’re already used to, isn’t it?

To save the trouble of searching for an IP address every time, there’s a way to fix your IP address, but an even more convenient way to do it is with the ‘avahi-daemon’ package!

After installation, restart your computer once, and close out Remote Desktop.

On the Windows side, you’ll need a software called Bonjour. This will require a separate installation. The easiest way to install the newest version of Bonjour for Windows is to install iTunes. For more details, check this other page.

Load the Remote Desktop Connection, and this time instead of an IP address, input ‘raspberrypi’ or ‘raspberrypi.local’.

We connected a WiFi adapter to the USB port, and we switched up the wires so that it takes power from a smartphone mobile battery. And that’s how we make it cordless! Now, this does have a usage time limit, until the power runs out, but it’s okay to bring this anywhere you like!

We felt comfortable trying out the Raspberry Radio we set up using MPD. Even if you leave it connected for hours listening to Internet radio, there’s no break in the WiFi connection or the sound, so we had a great time listening to the radio.

We successfully made a remote and cordless Raspberry Pi!
Because I was using displays, keyboards, and mouses for both  Raspberry Pi and Windows machines, I lost track of which cord belonged to which, and when the cords got tangled up in each other, I was always trying to figure out which was connected to what, and so it’s really handy that I can round them all up into one! If your network is safe, you can operate remotely without a hitch.

The battery-driven Raspberry Pi might not be the best choice for devices that consume a lot of power, but when I used it for myself I didn’t feel that it was a problem. Although, if you’re worried about your battery charge running out or if you’re going to use it for a long period of time, it might be better to plug it into an outlet!

Here’s what we’ll see next time: