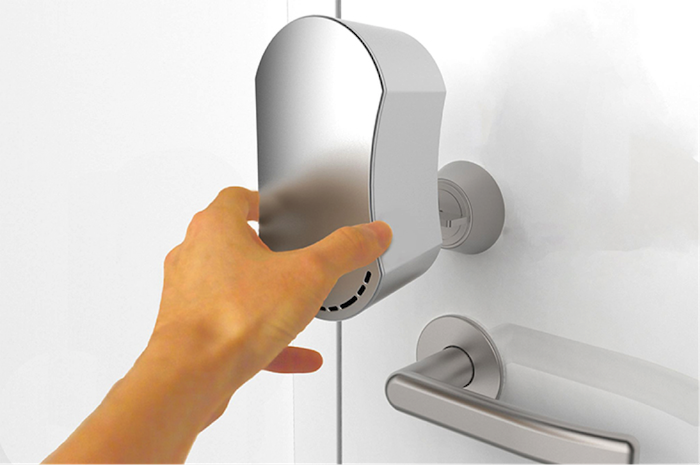 It all started at a Japanese pub. We hear stories about great product launch ideas at a café, starting with a piece of napkin to sketch on and a cup of coffee. But have you ever wondered how many of those napkins get thrown away instead of becoming an actual product or service?

For Akerun, the idea of the product was born at a Japanese pub, or izakaya in Japanese. Instead of just thinking and talking about it over some sake, beer, and tapas, the team actually made a prototype of the product after the discussion at the bar. Led by Kodai Kawase, now the CEO of Photosynth Inc., the team started a company to manufacture the product, and successfully launch the product to deliver it to the market within 16 months after the idea inception.

In this post, Akerun shares their journey to become a successful IoT startup in Japan.

The day we “saw” the product

Akerun, known as the “smart (IoT) lock,” is a product that can be easily placed at a home or office doors. It enables the software application from smartphones to lock or unlock the door, and eliminates the use of physical keys. The placement requires no tools and it is compatible on any door, and is very easy to operate from the app.

Kodai：We consider our product launch idea’s benefit to be “the gatekeeper of the house,” the door is locked unless you come home and open up the doors using the app. Akerun will make sure the doors are locked all the time. If you’re using a physical key, imagine what it’s like to be when you don’t have your key. Overall, as a user, you get to have a pretty smooth experience with this product.

Device Plus: Yes, sometimes we even forget if we locked the house or not. But with your product, you don’t even have to worry about that, and using an app to unlock the door is a very smooth experience. Especially just touching the product to unlock from inside of the door, is extremely easy for the users. Also, if you can electronically share the key through the app, you don’t have to hide your keys somewhere in your garden.

Kodai：Yea everything is becoming electronic nowadays, but I heard keys have always been physical for 4,000 years! And that was something that our members were questioning . In this day and age, do we really need to share keys in a physical format? That was our big “aha” moment at the bar. Once we had the “aha” moment, the brainstorming of product launch ideas accelerated and it clarified our concept and vision, including the market opportunities and the execution plans.

Co-Founder, Susumu：At that time, we all had a fulltime job in different industries like IT, home appliance manufacturing, marketing, etc. So we started working on the weekends and after work at night.

Kodai：And our meeting was regularly held once a week, and even when we didn’t meet often, we worked hard during the week to get things done individually. We all worked on it like crazy because we really believed in the potential of this product.

Co-Founder Susumu Kobayashi has an IT background.

The core of the technology – Bluetooth LE

Akerun communicates with your smartphone using Bluetooth technology called Bluetooth LE, or BLE or Bluetooth Smart. Announced in 2010 as part of Bluetooth 4.0, with an “LE” standing for Low Energy, BLE was released, and as the name suggests, it runs on low battery energy. For Akerun, which is equipped with a low battery notification feature, it can last up to 2 years with 4 AA batteries.

Co-Founder, Kazuhiro：We were able to make products like Akerun because of BLE. I come from an engineering background and before Akerun’s development, I’ve developed Bluetooth apps, but when it comes to the hardware side, I had no idea. Unlike the software sides of things, the information for hardware side is not easily accessible, like even if you look it up online about something, it’s not like someone is blogging about it, as is the case for the software world. It requires much more diligence involving researching, reading the data sheet, downloading, and reading thousands of pages about specs and descriptions of the product from Bluetooth SIG. Yet, learning about the lasting battery and security issues were so critical and important, we still had to do it regardless.

VP of mechanical design, Tatsuhiko：So with Akerun, we wanted to continue to make the physical keys work even when the users applied our product launch ideas on their door. In order to achieve this, we had to combine the motor parts with hand cranked parts and we needed to double the sensor to detect if the key is currently open or not. And this is just an example of how to implement the features without compromising the size or the design. Bluetooth was the core component for allowing many features to be implemented, but there are many other challenges still.

Co-Founder Kazuhiro Honma is also from an IT/app background

Tatsuhiko wanted to keep the design sleek, but with an interior hinge (above right), an extra step needs to be involved to slide down the case. But with a cam attached, it made it possible for the upper case to fit, making the overall polished look (above left).

Challenges are overcome by people

As the team further developed the product launch ideas, challenges also came along every step of the way. Especially after the prototyping, mass production, and architectural phase, there were a lot of bumps in the road to success. As a business, there was a lot of transactions with people and vendors, but the founding team had little expertise in the business arena. Yet, they were able to find their way through these challenges by the power of people.

Kazuhiro：I feel like there were always problems at each step of implementing our product launch ideas, and every problem was so critical, but interestingly enough after a couple of days trying to solve the problems, there was always some new ideas or people that came to cooperate or to solve the problems.

Tatsuhiko：Yea there was always someone that was willing to help, including our mentors, who were interested in what we were doing.

Kazuhiro：Yea this is true, like I don’t think I could have pulled off the BLE part alone. The people that became our brain, and companies that sold us the chips, were all critical throughout the process.

Kodai：And besides the purely technical sides, we also set up our review or mentor process for arranging the schedules and communicating back and forth with the factories. The people that mentored us had extensive manufacturing and engineering experiences and so we often turned to them to get some advice for things that we could be missing otherwise. Without them, I don’t think this company could have run properly, so we are very grateful for those people.

Prototypes of Akerun. The farthest right, called “bento box” is the very first prototype. Besides that, the form remained almost the same, but even with its subtle difference, we can see much thoughts and process went through each phase.

Before the interview with the founding members of Akerun about their product launch ideas we knew they were smart. That perception came from their ability to form strategic business partnerships with one of the biggest telecommunication companies in Japan, NTT docomo, and another big real estate broker firm known as HOME’S, and their overall business acumen and abilities. After talking to them though, we realized that it’s not just that they are smart, but that they were committed to hard work and dedication that put them where they are today.

Kodai：At first, the factories wouldn’t even talk to us. That’s fair enough though, because we were just random people from some random tech startup. Plus, we had product launch ideas we wanted to make within 3 months, like we’re building some type of software or something. Usually, in Japan, hardware products like this could take up to 3 to 5 years.

Susumu：Yea yea, they were like “don’t underestimate the world of manufacturing and engineering!”

Kodai：But, we stood up and asked them for help. We often asked, “How do we do this? What do you think about the schedule? Who will assure the quality?” And so on. We followed whoever if we could figure it out.

Kazuhiro：That was one of the most stressful periods. Adjusting the mold and circuit board and writing up the code was also very challenging, especially being unfamiliar with it all. But even then, we all wanted to build something that was amazing, and we all made so much effort to make that happen.

Kodai：Being committed, I think…. We were committed to make this happen, and I feel like that was all we needed to go through all this.

Kazuhiro：Yea, I think we were so committed that all the stress did not even bother us.

Kodai：Even when we all got rejected by many factories at first, our persistency and honesty led to many factory workers helping teach us many things, and advice from the people that came along the way, really supported us and made these steps possible. There was a lot that we had to go through, but that created this very happy environment we are in now.

Susumu：So I almost feel like we, individually, were committed and with our heart and soul poured into this project, people also became our product’s fan and started to commit and develop rapport to our product launch ideas as a result.

Kodai：As a company, we think that the delivering products to the market also means taking responsibility. This is our value that we all shared before we all quit our jobs to come work at this new company. Here, we value commitment above all.

For Akerun, the source of the success of their product launch ideas was a huge commitment by the founding team, rather than just a smart business plan. Because of this shared value, the team attracted people that became integral to its success. Akerun’s first pre-orders have been sold out, and their big partnership with large corporations has also been announced. We wish them all the best with their future endeavors.

The team at Photosynth Inc.