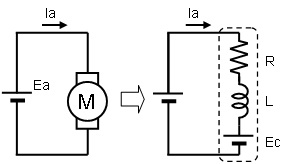 Question: Under what conditions does the maximum amount of current flow through the motor?

Answer: Maximum current flow occurs when there is no load in one direction and the motor is operating at maximum speed, at which time operation will immediately reverse direction.

An equivalent circuit of a DC brush motor is shown in Figure 1, while Figure 2 shows the power supply polarity conditions immediately before and after change when the DC brush motor is operating at maximum speed.

A DC brush motor can be represented as a series-connected circuit with a resistor, inductor, and motor-generated voltage. When the motor reaches its maximum speed under no-load conditions, the generated motor voltage also becomes maxed out, with a value Ecmax (see Figure 2 (a) above). At this time the power supply connected to the motor reverses directions in order to reverse motor rotation (Figure 2 (b)). The supply and generated voltages are added and applied to the series motor circuit consisting of the resistor and inductor. This will result in maximum current flow during motor operation.

With a maximum current Ipk,

of DC current should flow, but since the inductance will act to prevent instantaneous current change and the current will steeply rise with respect to time, this maximum value will not be reached.

With respect to the direction of rotation, when the motor current flow is in reverse, torque works in the reverse direction, reducing rotational speed (RPM). The generated motor voltage is proportional to the rotational speed. As a result, when the generated voltage decreases the current flow to the motor will also decrease. These transient waveforms are shown in Figure 3. 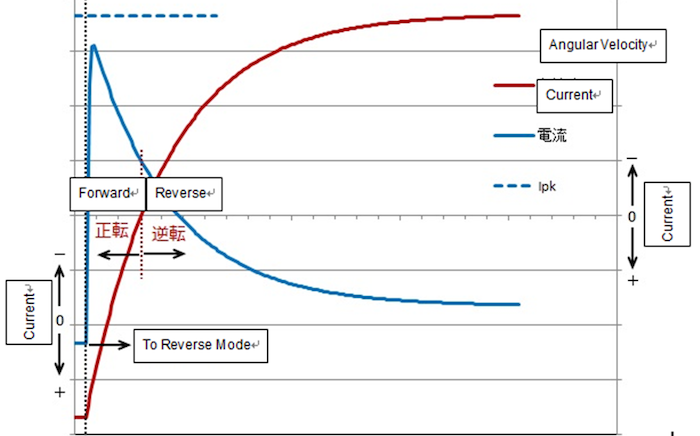