Innovation Success Factors from the Creator of Rapiro 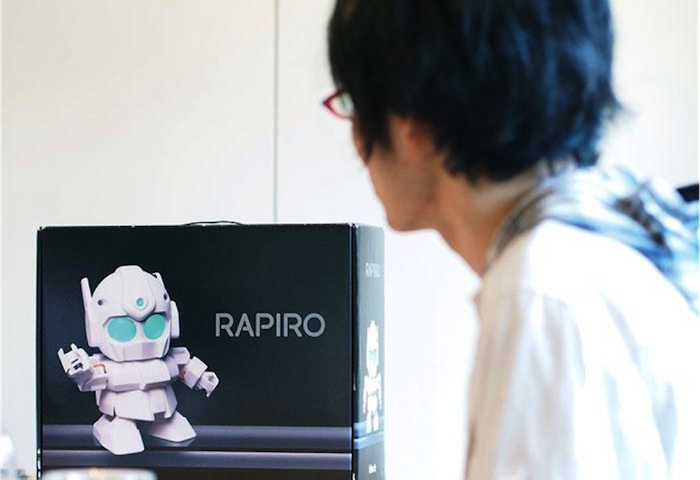 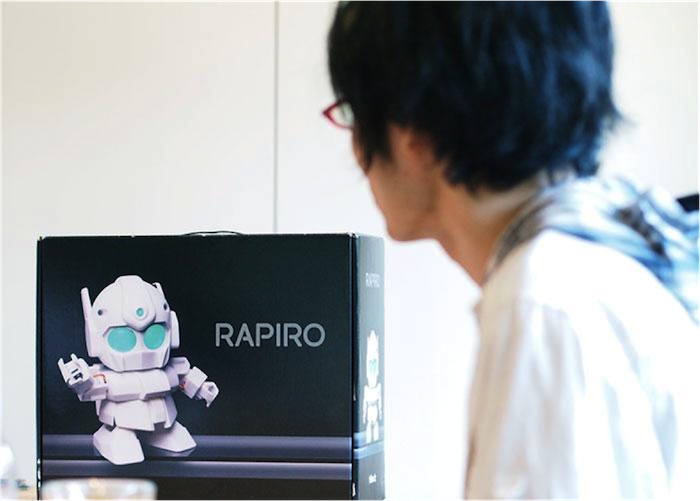 We like to highlight innovators in making and building things who teach us success factors we can use. For this post, we talked to Shota Ishiwatari, the developer of the DIY robot kit RAPIRO.  He provided us with inspirational innovation success factors. His project was the first ever hardware project in Japan to successfully raise enough money on the crowd-funding site Kickstarter and make the product available to the general public.
As a maverick engineer, Shota established a venture company Kiluck in 2011.  He had proven experience with many great projects such as prototype development for electronics and automobile makers and Necomimi, a popular cat ear shaped device that moves with brainwaves. In this post, we will take a look at what’s behind the innovation that keeps building things like RAPIRO, a successful project on Kickstarter.

Stop Talking About it, Start Doing it!

Since Kickstarter was born in the U.S. in 2009, it has become very influential throughout the world. Kickstarter attracts various ideas ranging from ones that make you wonder “Is this even possible?” to ones that excite our imagination.
Shota Ishiwatari, creator of the DIY robot RAPIRO, says “There were lots of discussions going on about feasibility of some projects that were drawing people’s attention.  But it is not enough to just talk about it. As a maker, creator, and builder, I always think one needs to take up the challenge using hardware.” 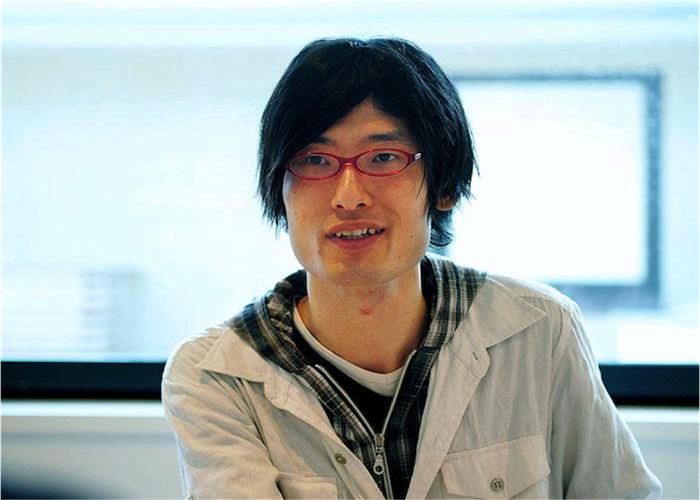 Shota Ishiwatari, the developer of RAPIRO.

“Being successful on Kickstarter was my goal from the get go.  If I was going to do it, I wanted to adopt the current trend in a uniquely Japanese way to create something that everybody could enjoy.” The prototypes of the robot were made using 3D printers.  The control board is compatible with Arduino.  In addition, Raspberry Pi, which is a very popular credit card-sized single-board computer (sold separately), can also be installed.  The inspiration for its exterior design was taken from the appeal of Japanese robot animations. I wanted to create a robot with the appearance that could get people excited visually, at a price many people could afford.  After a 4-month development period, the humanoid robot RAPIRO, filled with the Japanese engineer’s spirit, was born in April 2013.

As soon as RAPIRO was introduced on Kickstarter in June 2013, high praises started coming in from all around the world with likes and comments like “cute!” or in Japanese “kawaii”. By the end of the campaign, it raised 10 million yen, equivalent to almost $100,000 USD, and it far exceeded the funding goal of 3 million yen.  The project further went on to see another huge success at the Japanese crowd-funding site Makuake. On paper it all reads like a swift success story, but the path to it was not a smooth one. There were some innovation success factors needed to keeping going. 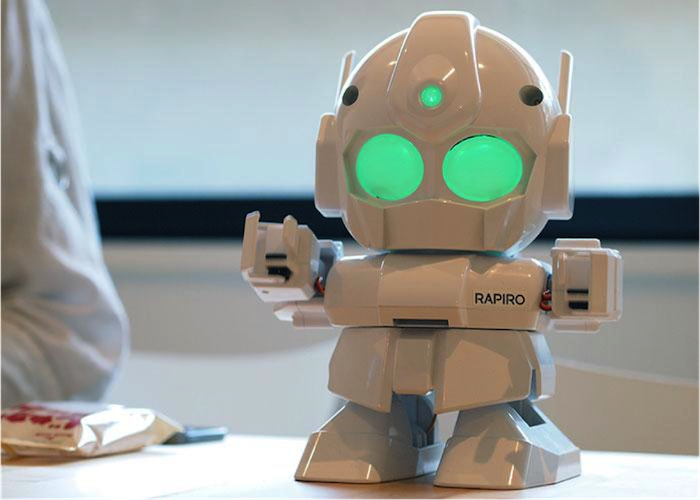 The shining eyes with multi-color LEDs allow for richer expressions.

Failure as a Springboard

RAPIRO was not Shota’s first challenge on Kickstarter. His first campaign was for a project called “Tailly”, a product with a furry tail that moves to show its user’s feelings.  Based on the past experiences from the development of “Necomimi,” a cat ear shaped device that moves with brainwaves, he decided to focus on girls as target customers, and developed a product with a furry tail that responded to the heart rate measured by a sensor.

“I thought this product was fun to use to play with kids or to be used as a party toy, by girls who like animations and cosplay. This also represented a uniqueness of Japan.  Yet, even though high school girls loved it, it didn’t raise enough money, which was really the most important part.”

“Those girls sent me so many comments and emails, saying ‘I don’t have money right now, but I’m really looking forward to the day when this hits stores.’  That was all great, but I couldn’t make the product without reaching the funding goal, so that was really bitter sweet… I don’t consider it a failure though.  I had 5 times as many Facebook likes as RAPIRO got, and there was also a big number of playbacks on YouTube.  It’s just that this project wasn’t a good match for the people on Kickstarter.” 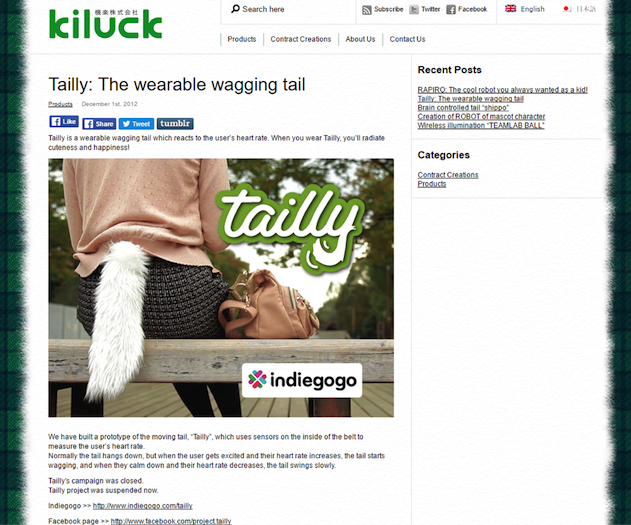 The Secret Story of Creating RAPIRO

His next challenge was the development of RAPIRO.  This time he decided to target men in their 30’s and 40’s as they generally have some extra money to spend. He also looked into getting it to work with Raspberry Pi, which was getting a lot of attention on Kickstarter as well.

“I thought a robot that can work with Raspberry Pi would be interesting.  A robot would also be a good fit for my targeted customers.  It would also be a uniquely Japanese product since Japanese robot animations are popular overseas, too.  There were many robot projects on Kickstarter, but none of them used Raspberry Pi and some of the products had low-quality outer shells.  High-quality products, on the other hand, cost more than 100,000 yen, $1,000 USD, which was a bit too expensive for most of us.  If I did some research on those things and improved the quality while keeping the price down, I knew I could make a unique robot.”

The name RAPIRO is the concatenation of the initials of Raspberry Pi and Robot.  RAPIRO, along with its name, is truly a reflection of Shota’s desire to adopt the current trend in a uniquely Japanese way to create a product everybody can enjoy. 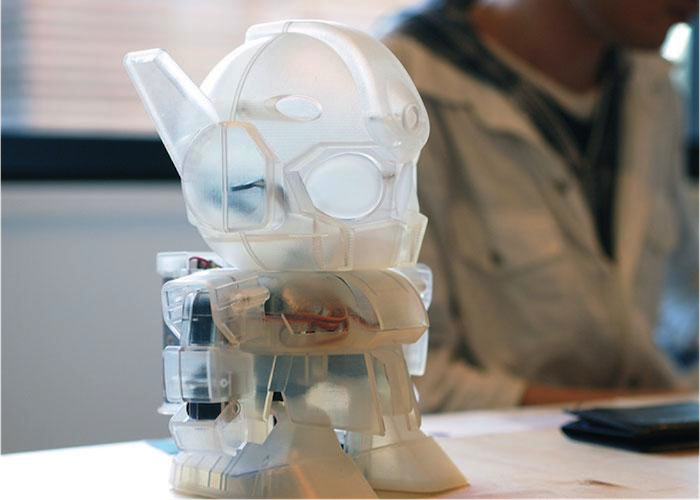 A prototype of RAPIRO.

The Joy of Creating and Fun of Customizing

RAPIRO became available to the general public in February 2014, and since then the responses have been tremendous for its high-quality exterior shell, its cute design and its reasonable price, which is less than 50,000 yen, less than $500 USD.
“There had been robots that cost about 50,000 yen before, but none of those had high-quality outer shells.  I believe the price of a product is a part of its overall appeal.  If RAPIRO cost more than 100,000 Yen, I don’t think it would have gotten this much attention.  If the quality is high and the price goes down to 50,000 yen, people who can’t spend 100,000 yen might reconsider.  Maybe a married man could use those factors to persuade his wife so he could buy one.”

There’s no need for soldering to assemble the parts so a beginner can jump right in.  You just have to tighten screws with a driver and attach the connectors.  It comes with 12 servomotors that move its 12 joints and a pre-programmed board that controls those joints.  As soon as all the parts are assembled, you, even as a beginner, can make it move and have fun.  “A student who’s studying robotics can assemble it in 2-3 hours.”

Another appealing point is the Arduino compatible control board.  You can rewrite the program and customize it the way you like; you can make it dance or sweep, for example. 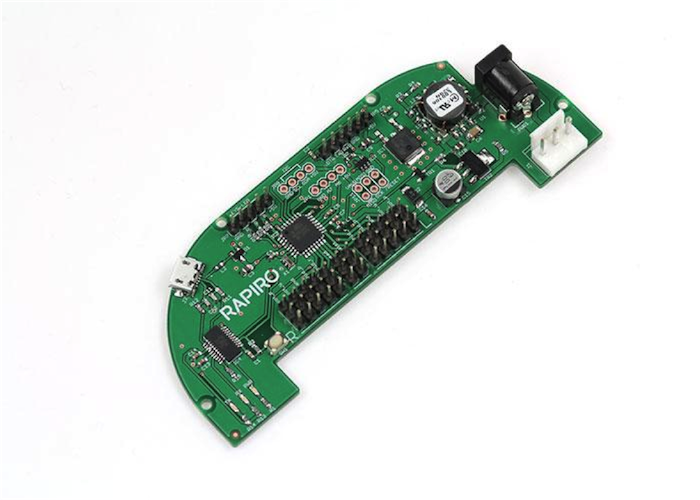 The control board is Arduino compatible, and the program can be rewritten.

Yet another big feature is that a Raspberry Pi and its camera module, which are sold separately, can be installed into its head.  Possibilities are endless.  For example, you can connect the robot to the internet and have it send you images from home while you are away, enjoy conversations with it using voice recognition, or have it identify faces with image recognition.  A beginner in electronics can take it slow and spend time studying programing while an enthusiast can go right in and customize the robot to their liking. Its design allows for greater enjoyment by people with different skill levels. 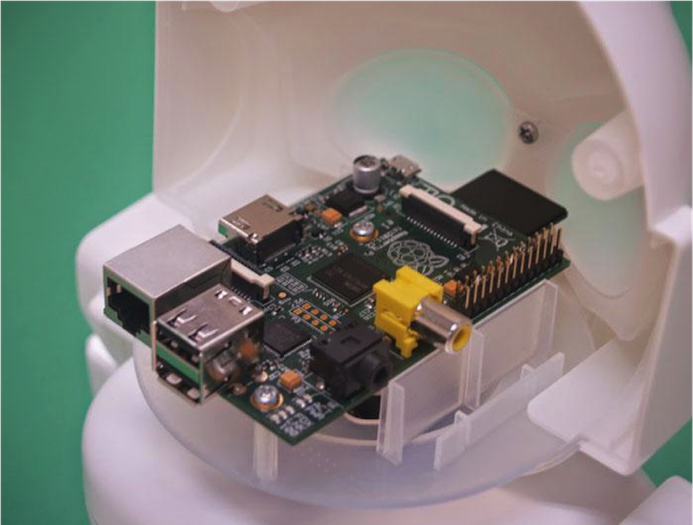 Separately sold Raspberry Pi and its camera module can be installed in the head.

The Joy of DIY

“Some people who bought RAPIRO are posting on their blogs or Facebook instructions on how to assemble it while others are writing about new ways to play with it by rewriting the program.  There was one guy who did a programming even I don’t understand, and took the time to make a 1 hour long video to report the result.  It was in English with lots of jargons, so I couldn’t understand it at all, but seeing that kind of stuff really makes me happy.”

These users enthusiasms must come from RAPIRO’s features, as well as its great design and its high-quality outer shell that make you happy just by looking at it.
“The appearance is really important.  If it had a cheap design, you wouldn’t feel motivated when assembling it, right?  The mold for RAPIRO is made by Miyoshi, a small factory that has great expertise and skills. To build the mold, the craftsmen there make micro adjustments in the size of tenths of a millimeter by hand, so all the parts match up and come together perfectly.  And it looks cute, so it’s easy to fall in love with it!”.

“I’m good at making cute things, so that was something I really focused on.  The big head and short body make it look cute and lovable of course, but I chose the design also because there were no other robots like that.  Unlike a slender robot, we don’t need to worry about it falling down, which is a good thing for a beginner, too.”

The name of the company “Kiluck,” where Shota serves as the CEO, is written 機楽 in Kanji or Japanese characters, meaning “machine fun.”  Make a fun machine.  Have fun making a machine, and let many people have fun with it.  It is a name that came from combining fun and the word machine. As RAPIRO is commercially delivered to the hands of more and more people, it is helping spread Kiluck’s spirit of having fun both in Japan and abroad. 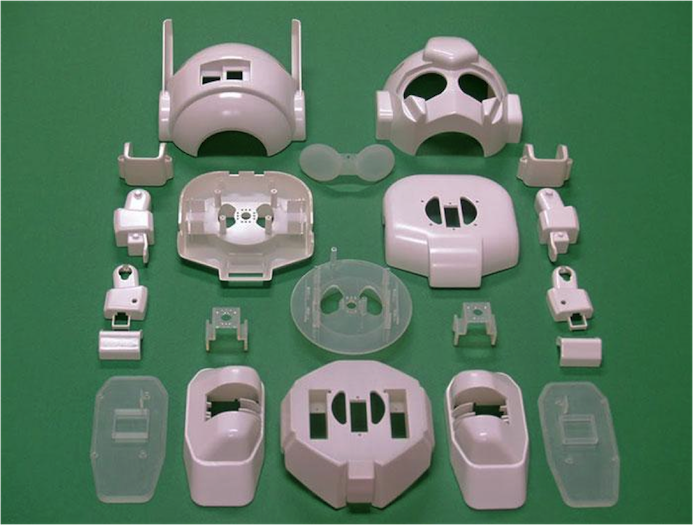 Make things enjoyable and easy for everybody

Lastly, we asked Shota his vision for the future.
“I want to keep creating things that make customers happy.  It doesn’t do any good if a startup like us started making things that big corporations are making.  There are so many areas that big corporations cannot step into.  A robot like RAPIRO is one of them. I will be able to keep myself involved in building and making things I love as an engineer, as long as I continue with things that fit with the market.  Most of all, the most important thing is to ‘keep making’ things.  I think I will do another Kickstarter project too.”

“One more thing.  I’m actually planning on starting a new company by the end of the year.  Something like an incubation company. When I go to give speeches, I’m often asked to offer advice on starting a business.  So, it’ll be like a consulting company that can provide support for those people. Over the years, I have developed ties with various corporations, small factories and investors. I can help with productions. I have also gained sales and marketing know-how.  If a person with a similar vision as mine seriously wants to build or make things, I can introduce them to investors, help with productions and offer advice.”

“I believe it’s possible for me to run together with another player while supporting them.  If they keep at it, they might eventually be able to have their own companies.  I want to build a company like that.”

The name Kiluck has, besides “機楽 (machine fun), another meaning: “気楽” or “easy going.”
“When you are involved with making and building things, you oftentimes start to get too serious and work way too hard.  To keep doing what you love, you need to ‘take it easy.’  That’s the other meaning I wanted to impart to the company name.” 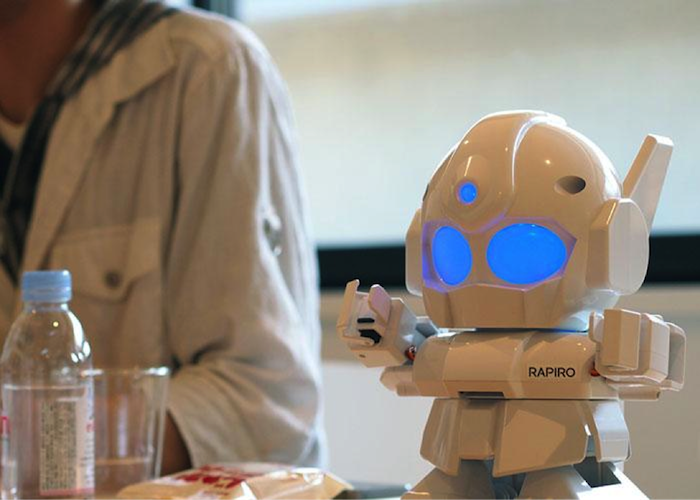 RAPIRO can be purchased online on sites such as Amazon.  For details, go to the RAPIRO web site.