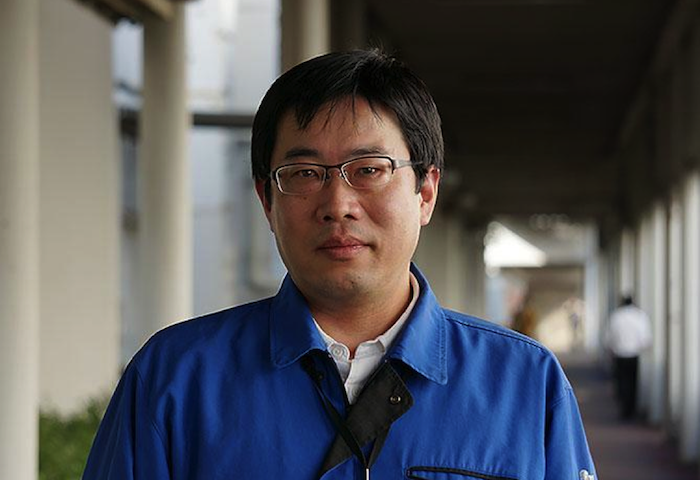 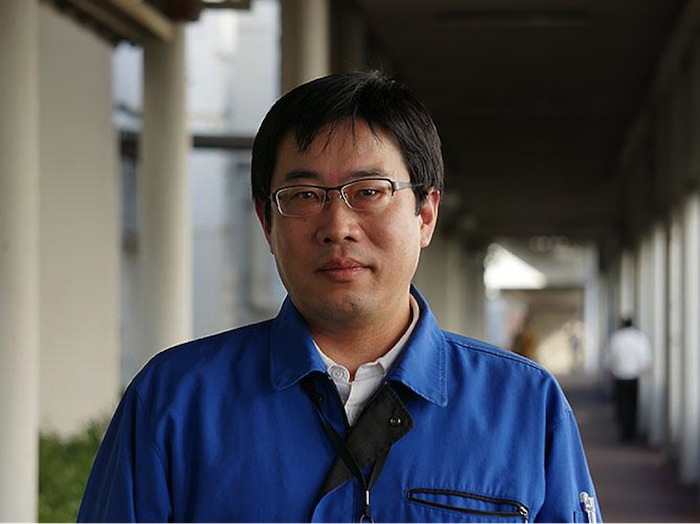 When you hear “master craftsmen”, whom do you think of first? Builders of temples, carpenters, mechanics and tradesmen might come to mind, but they are not the only ones. As a DevicePlus reader, you probably know that there are those called “master craftsmen” in the modern manufacturing sphere. Mr. Katsuma Saito is certainly one of them.

The “Contemporary Master Craftsmen”, officially known as “Outstanding Technicians”, is an award program conducted by the Ministry of Health, Labor and Welfare of Japan. It honors exceptional people with expert skills. In November 2014, Mr. Saito was recognized as a Master Craftsman, the third youngest of the 149 awardees. His expert skill? Soldering.

It’s not just a run of the mill soldering, though. Mr. Saito works for NEC Toshiba Space System (*currently NEC Space Technology). As the name suggests, the company manufactures things that get flown into space such as satellites, and equipment carried on board by satellites. One of the projects he was involved in was Hayabusa.

The dramatic return of “Hayabusa” to the earth from its space mission in 2010 and the launch of “Hayabusa2” this year are both fresh in our mind. The team lead by Mr. Saito was in charge of production of Hayabusa’s electronic parts, or its “brain” and “nerves.” 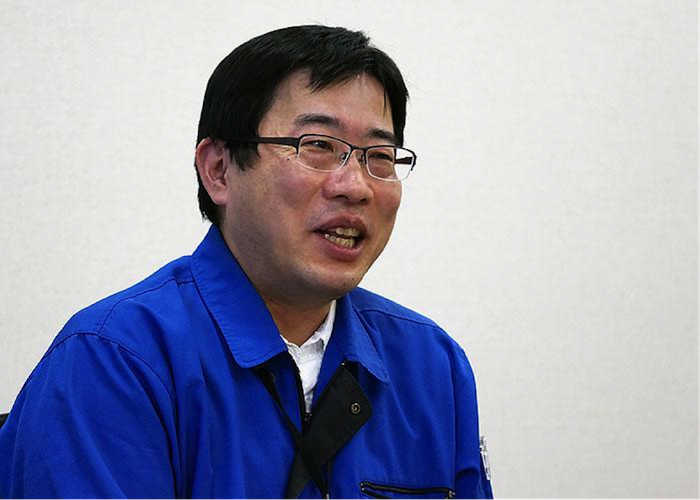 DevicePlus(DP): Congratulations on receiving the accolade as a “Contemporary Master Craftsman” and on the successful launch of “Hayabusa2.”

Thank you. I am relieved that the launch was successful (laugh).

The first “Hayabusa” was truly a hard work. With “Hayabusa2”, both its design and our team had gotten much better. I hope it will complete its missions without incident.

DP: You are making things that have to work in an extreme environment, which is different from making electronic equipment we regularly use. What is your job like?

For the “Hayabusa2” project, our team was in charge of soldering 115 boards. We solder one board at a time by hand.

We are talking about space, so the requirements are quite rigorous. There is considerable shaking and vibration during launch. As for the temperature change, you might normally make things assuming the temperature range of 0 to 60 degrees Celsius, but in our line of work, we must assume the range of -150 degrees to +100 degrees, which really means a variance of 250 degrees.

This goes without saying, but satellites are supposed to operate for decades, and no repair can be done. There’s also a concern for weight. Each bit of solder might be insignificant, but if we start adding on more than needed, we cannot ignore the effect its weight has on the space craft.

In addition, we must take necessary measures for radiation, static electricity, and such. It requires quite a bit more time and effort, compared to consumer products. This is something that machines cannot achieve. We need to do it by hand.

DP: In other words, you had to solder an astounding number of pieces. Even by rough lower range estimate, we are talking about over 100,000 pieces…

Yes, that is correct, but “Hayabusa2” is not the only thing we’re making. There are other satellites we are involved in. It really is business as usual for us.

DP: As a team lead, you must have management duties as well. Why do you personally do the soldering work? Can’t you have your staff do the work?

Some work might be especially difficult, my staff might not feel confident enough with certain things, or new techniques might be required… When it comes to those things, they are all up to me. More than anything else though, I really like the work. If possible, I want to be holding a soldering iron all the time (laughing)… Well, that might be an exaggeration, but honestly, I love looking in a microscope, thinking this way or that to figure out how I could successfully achieve a task. 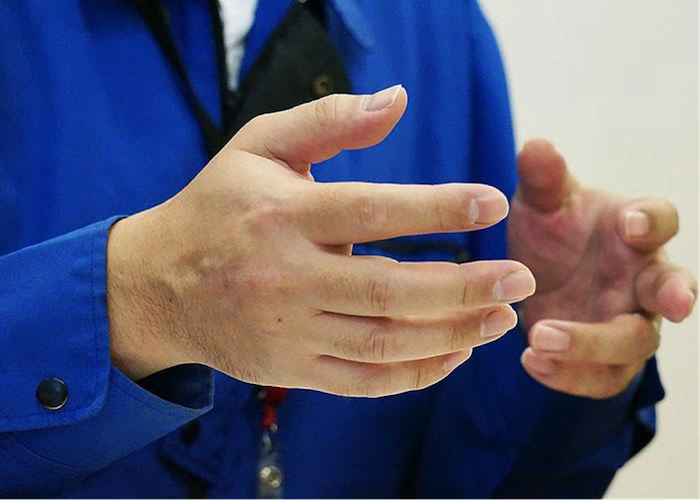 What is the secret to mastering soldering? 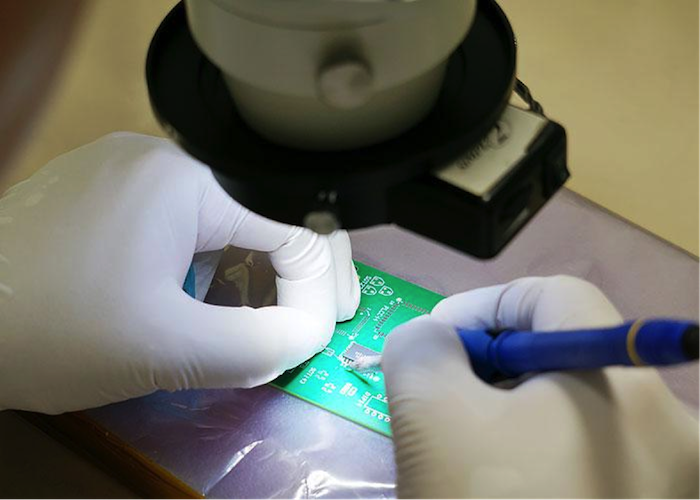 DP: Some readers of DevicePlus say they have trouble soldering. As an expert with 26 years of experience, please do share with us the secret to good soldering.

There is no secret.

DP: Whoa…(Laughing). Then, how did you become so good at it?

…Well, I haven’t really given much thought to such things. You just have to constantly push yourself. I think that’s what it is.

While I was in school, I only worked on soldering a little bit. It wasn’t something that I especially liked or did a lot of. I wasn’t clever with my hands either.

After I graduated from a technical high school, I got this job, and started working on projects involving space. That is when I realized how sophisticated and deep soldering could be. From that point on, I dedicated myself to soldering and space.

If anything, the one thing I have always done is to “always be creative.” As I said earlier, I’m always thinking about things like, “We might be able to get it done better if we did it this way” or “It might be easier if we changed the design this way.”

I’m also in a position to train the young staff, and I keep telling them, “Don’t just make things the way you are told. We need to always think for ourselves.”

DP: Do you have favorite tools or anything particular you like to have in your workspace?

None at all (laughing).

No, I think I’m not that fussy about those things. I’m using tools that anybody can buy anywhere. I don’t make pretentious customizations or use things that other people don’t use… I don’t have any secrets like that. All of my tools are quite ordinary.

The most important thing, after all, is not the tools but “creativity.” It’s doing things with thought. Don’t just follow the plans. You could perhaps add a little modification to a part before using it, which might improve the overall quality, or come up with things like a better order to place parts on a board, an optimal length of time to apply a soldering iron, or a better way to add the heat… There are so many things you could do. Use your brain and try doing it. Always be creative.

I’m always saying things like “just try it and then think” to the junior staff. If they actually do things and then think about them together with me, not only do they get the real feel for it, ideas emerge from the experience, too. You get a deeper understanding and skills; your body learns it.

Even if you fail in your attempt, that becomes a learning experience, too. You need to think about it afterwards. That is what’s important.

DP: You have 26 years of soldering experience. Are there still things that you could improve?

Of course there are. It is trial and error every day for me. That is why I have to “push myself”. I haven’t yet discovered the ultimate answer.

In addition to always thinking, I’m constantly asking for advice from various people, not just from the senior staff and experts but also from the junior staff. Since making things for use in space can involve a wide range of things, there are so many things I don’t understand. So, I meet with lots of people and listen to them. I learn from them. There are so many things you can learn from the young staff, too. They actually have good soldering skills.

DP: Is there anything you do day-to-day for the sake of soldering work?

It’s not just for the sake of soldering work, but I do take care to maintain my health. When I’m not feeling well, it might affect the precision of my work. I think my work is similar to that of a professional athlete in that sense. A regular lifestyle habit is important.

As for the mental aspect of it, I’m really thankful to my parents. That’s because I’m not one to get distressed by overthinking things (laughing). Even when there are some troubles, as soon as I have a soldering iron in my hand, I can totally concentrate on the work in front of me. 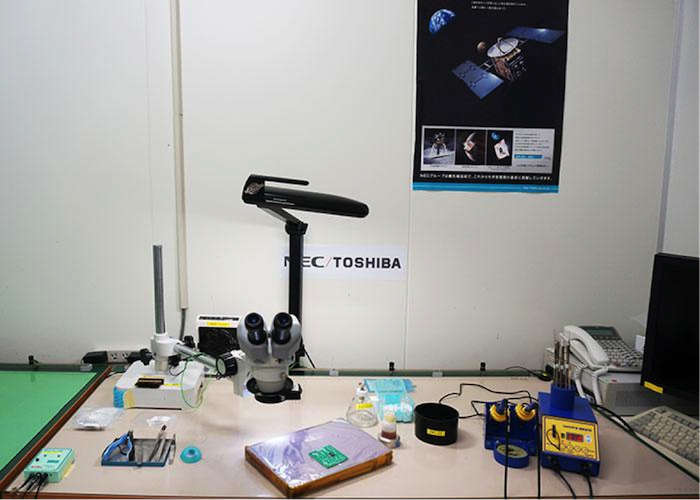 The workspace we asked Mr. Saito to set up temporarily. Nothing is particularly unusual except for a microscope. 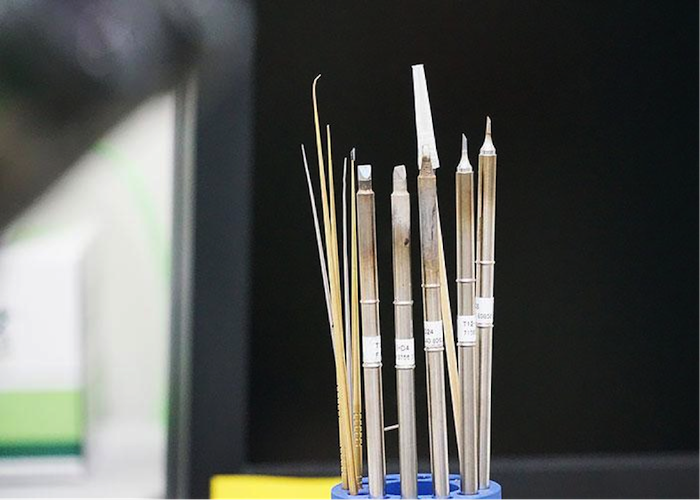 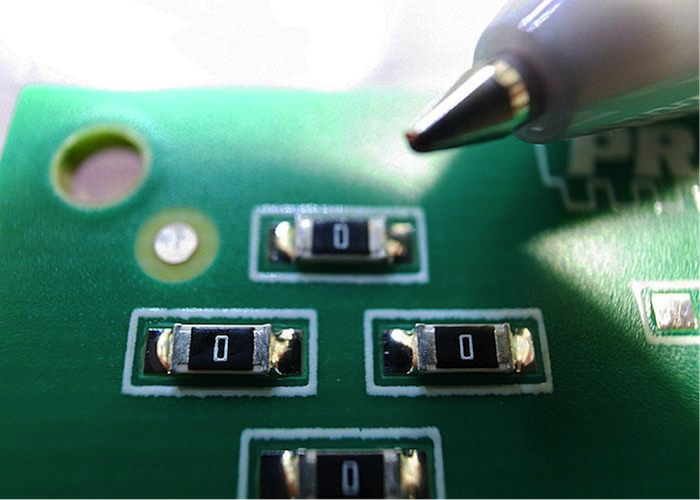 He quickly produced these fillets during our conversation. You can see an out-of-focus tip of a ballpoint pen in the upper part of the picture.

“This work is to die for”

DP: While you work, do you get distracting thoughts?

Yes, I do. For example, I’d be thinking, “It’s gotten harder to see things close up lately” (laughing).

However, soldering is not the kind of work that requires you to have special concentration for a short period of time. Rather, it requires long-term precision, and you can control that. That is another aspect of work where I need to push myself.

DP: I see. What you’re saying is that your attitude in tackling your day-to-day work is more important than concerning yourself with things like superficial techniques.   Do you have anything you’d like to say to the readers of DevicePlus?

This work is “to die for.” What you create might lead to a huge discovery of the century. It might change the lives of people all over the world. I’m overjoyed that I am allowed to do such work. I’m happy. If you’re up for it, I’d urge you to pursue the career where you get to make things!

DP: Thank you for sharing your insights and advice Mr. Saito!

Mr. Saito’s secret to soldering can perhaps be summarized as think for yourselves. He does not have special tools or special techniques that nobody knows about. He says simply concentrating, thinking, aiming towards better results, and continuously making efforts are more important. He says he still has room for improvement after dedicating 26 years to the craft. We felt that this humbleness of his, as well as the keen desire to pursue the craft, are befitting to the man called a “Contemporary Master Craftsman.”

At the core of his everyday work must be the feeling of loving what he does. Mr. Saito says that he often asks the team members, “Are you having fun?” We get good at things we love might sound cliché, but nonetheless, after speaking to Mr. Saito you will leave with the same feeling.