How to Add Siri Control to Your Raspberry Pi Project

1. Purpose
The purpose of this tutorial is to teach you how to use the SiriControl open-source Python framework to add Siri functionality and control to RaspberryPi Projects.

The SiriControl module requires a Gmail account to work. I set up a new Gmail account just for use with SiriControl and suggest doing the same. This is a good idea because the Python script will have the username and password for this account in it.

Once an account is created I allow less secure apps access to Gmail. This is because the Gmail server views the Python script as a less secure app. I do this under the Sign-in & Security section for my account.

The last step of setting up your Gmail account is to enable IMAP protocol. This can be done under Gmail->Settings->Gear Part->Settings->Forwarding and POP/IMAP->IMAP Access. 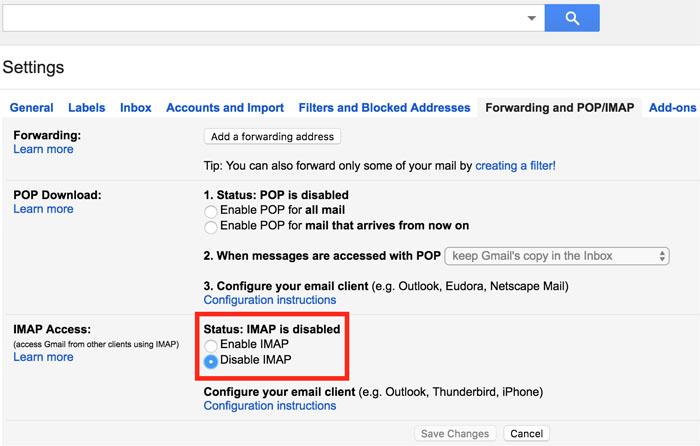 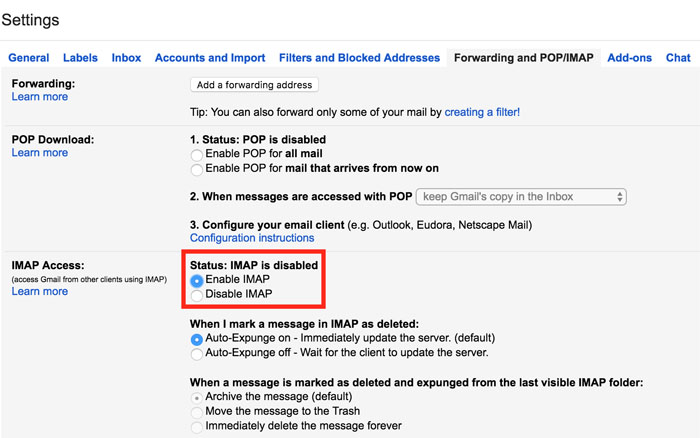 Connect “Notes” on your iOS device to the Gmail account set up to be used with SiriControl. I go to Settings->Accounts & Passwords->Add Account and add the Gmail account I just set up. After adding that account, I select it and enable notes (Figure 6: Notes Under Gmail Account). Next, I go to Settings->Notes and enable “On My iPhone” Account. I then change my Default Account to the Gmail Account. My iOS device is now set up. 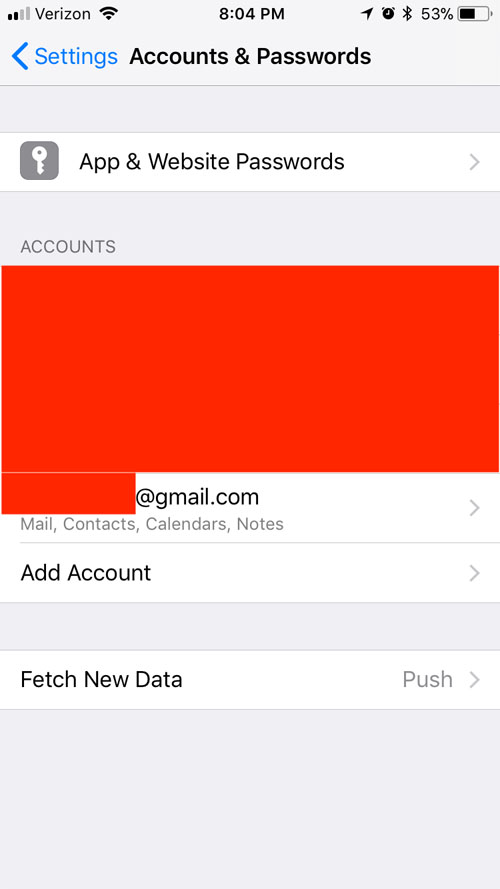 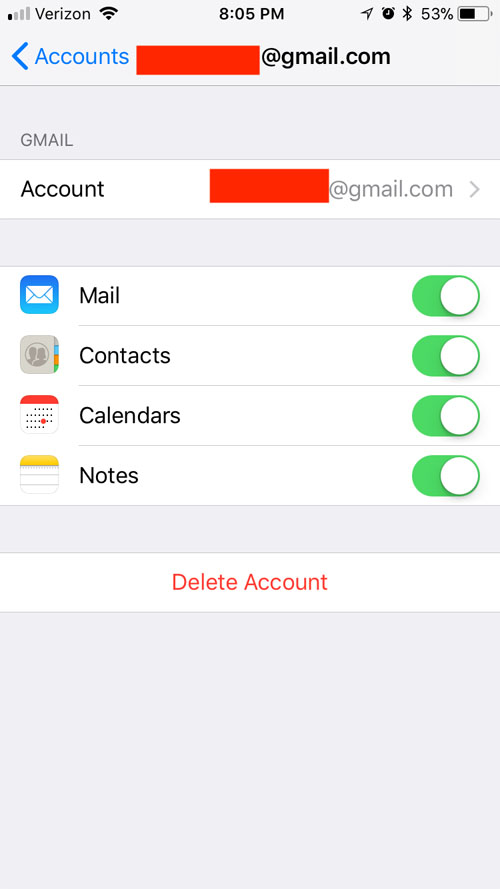 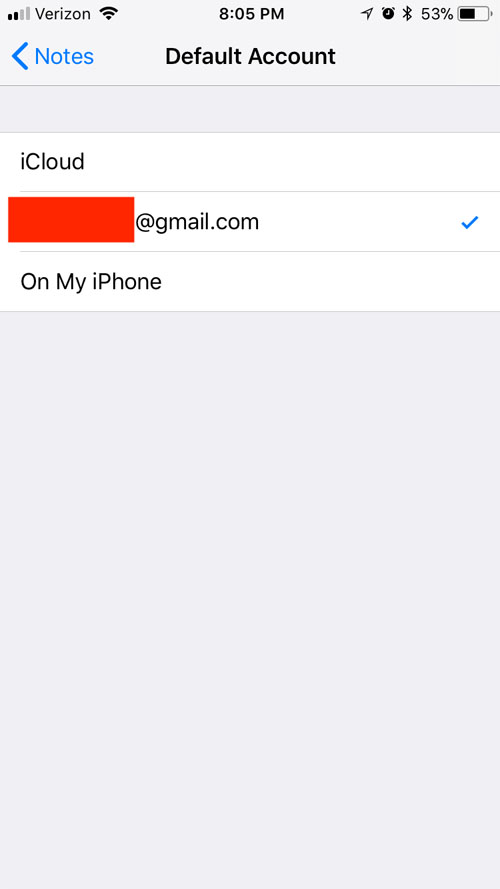 To use SiriControl I clone the repository for the module to my RaspberryPi. To do this I open the terminal window and enter the following commands: 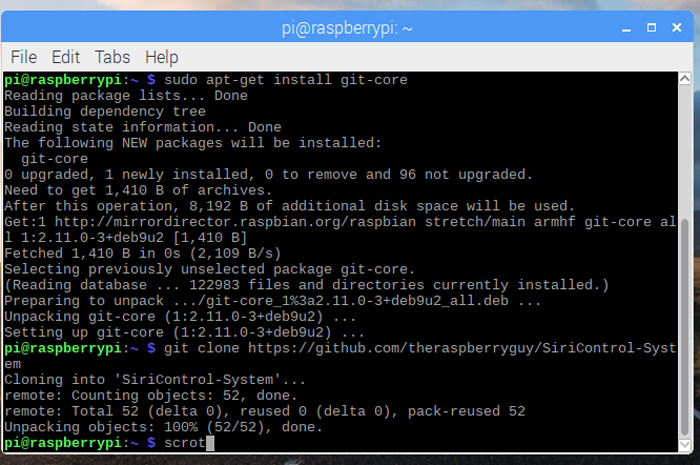 After cloning the repository, I open the script: siricontrol.py. Inside the script I entered my Gmail account username and password and save the script.

3.2 Create Your Own Module

To make your own module, follow the steps below within a template script:

1. Name the module in “moduleName”
2. Give the module “commandWords” that you need to give to Siri to execute a command.
3. Write the function you want executed under execute(command) function.
4. Make sure you save your script in the modules folder.

The circuit I set up SiriControl to command is a simple LED circuit. I always like to make a wiring diagram () using Fritzing, an open-source schematic capture and PCB routing software. You can download Fritzing using the following link (optional): http://fritzing.org/home/ 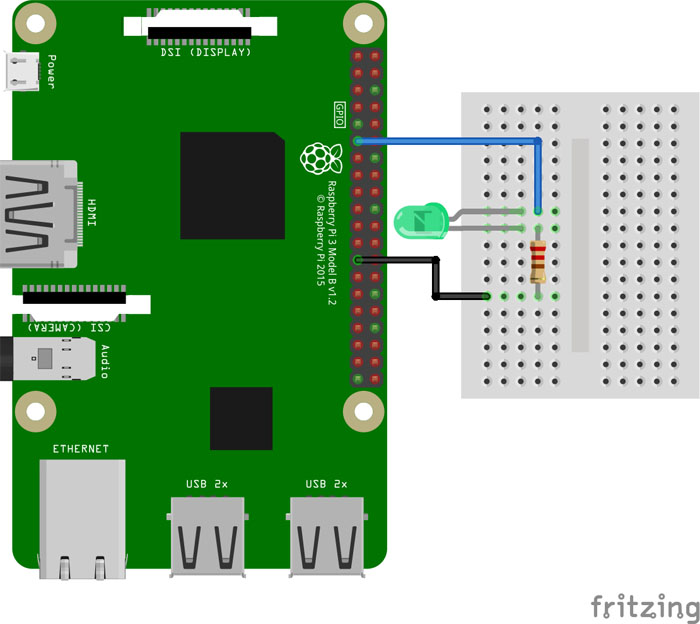 5.0 Uploading and Running the Code

After completing all the steps, I run the SiriControl script with the following command:

The script starts running and should initialize with all the modules in the module folder. 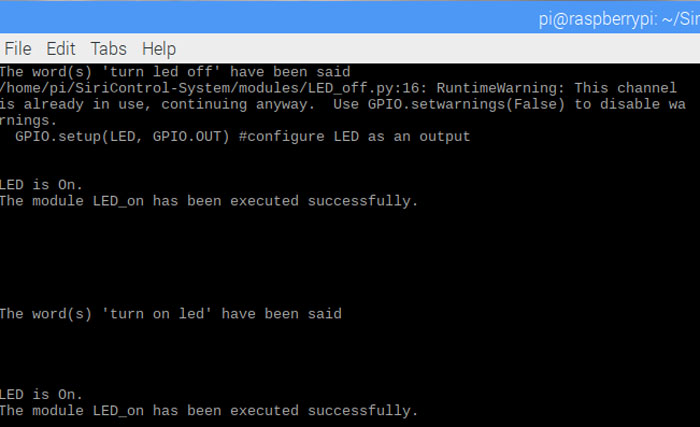 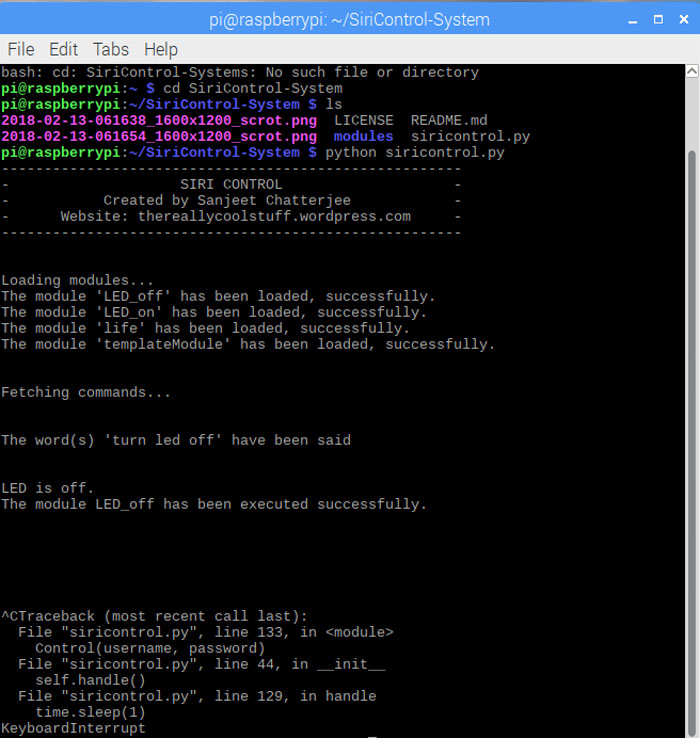 Now I command Siri, “Note: Turn on LED,” and my LED turns on while the script tells me it executed the command and is listening for another. I now say, “Note: Turn off LED,” and the LED is turned off. The script will execute the commands I give to Siri from anywhere in the world as long as:

1. The script is running on the Raspberry Pi.
2. The Raspberry Pi is connected to the Internet so that it can poll the Gmail account.

You can now add any modules you want to add SiriControl to any Raspberry Pi projects. Although I used a Pi for this project, this should work on other Linux Development boards with Python installed.

#These are the words you must say for this module to be executed
commandWords = [“turn”, “on”, “led”]

#This is the main function which will be execute when the above command words are said
def execute(command):
LED = 11 # Set LED pin to pin 11

#These are the words you must say for this module to be executed
commandWords = [“turn”, “off”, “led”]

#This is the main function which will be execute when the above command words are said
def execute(command):
LED = 11 # Set LED pin to pin 11