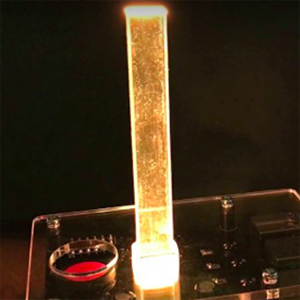 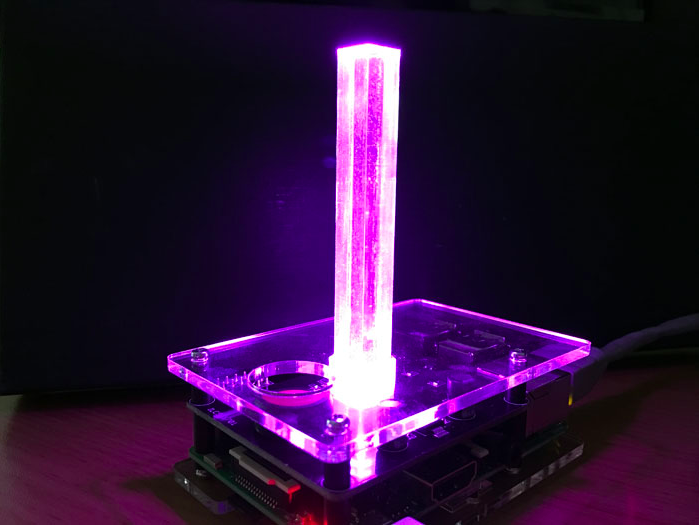 The star in today’s article will be “Crystal Signal Pi.”

Crystal Signal Pi is an extension module that can be placed on top of any Raspberry Pi. Like the picture above, it has the function to act as a warning light.

This time, we’ll be showing you all the steps for assembling the body and installing the middleware for your Crystal Signal Pi!

What Is Crystal Signal Pi? 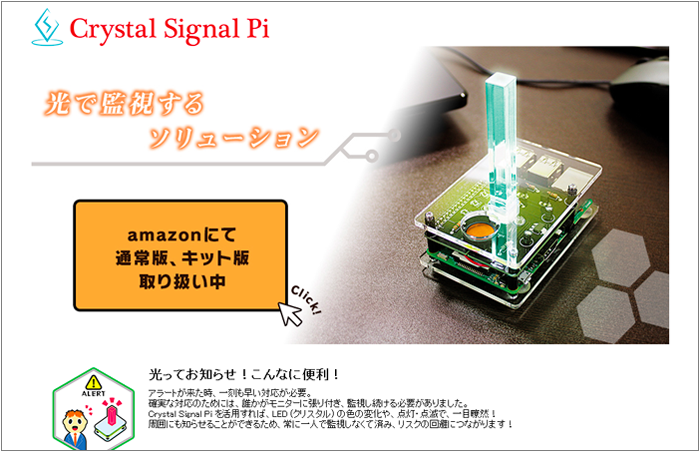 Whenever there’s an alert, quick responses are a constant necessity.
Moreover, for any accurate response, there always needs to be someone constantly looking at the monitor.
With Crystal Signal Pi, you can now see any alerts quickly with the change of the color on the LED!
Because the lights can also inform others, you won’t have to monitor for alerts all by yourself anymore.
You can evade all risks!

In the past, we’ve covered these types of alert systems that use sound/light, but when we actually used them, we never actually noticed any of the alerts during a number of instances. Not anymore! With Crystal Signal Pi, you no longer have to worry about missing alerts.

Visualize any kind of events: the LED warning light solution at Raspberry!
(Jumps to Japanese page)

This is a PowerPoint slide compiling all the details about Crystal Signal Pi. It delves into the development cycles of the Crystal Signal Pi, from prototyping to heat resistance trials. Check it out! 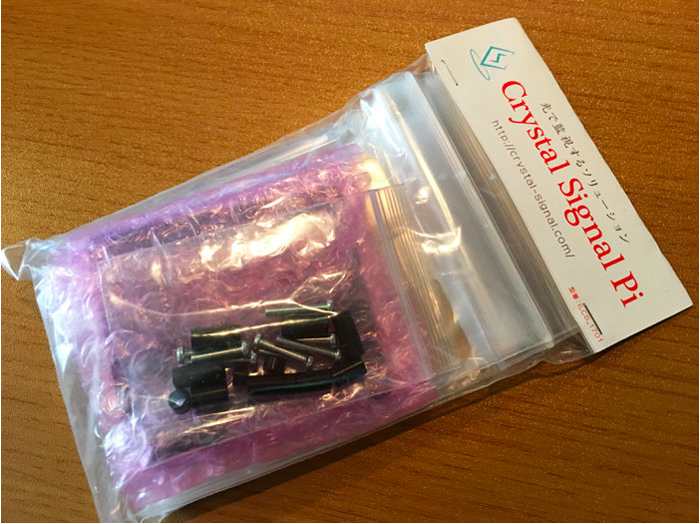 The version of Crystal Signal Pi we’ll be handling today will be the “Standard” type. There’s also a “Kit” type on sale, which includes soldering. Either one can be purchased on Amazon. 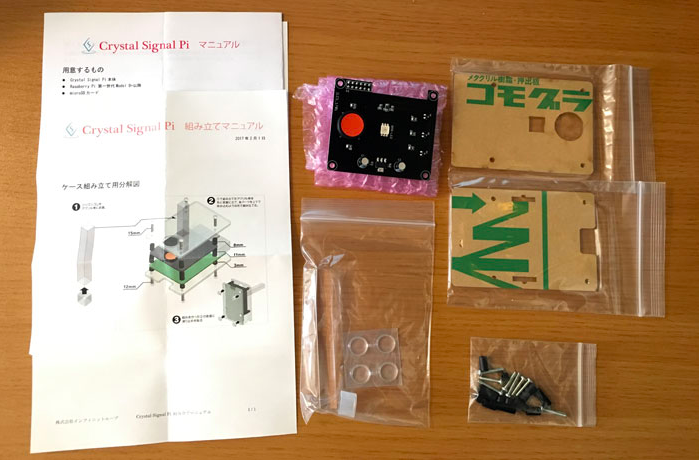 Aside from the Crystal Signal Pi body, there’ll be a three-page manual along with instructions on A4 paper, as well as parts and screws for constructing the acrylic case. All the necessary components are included in one place. Given you have the Raspberry Pi body and a network in place, you’ll be good to go!

Note: If you’d like to set up a voice alert, then also have a speaker prepared.

The manual is also available on the official site in PDF form. These are all written in Japanese, but don’t worry! That’s why we are going to explain it in English. The manuals do contain visual contents, so please take a look for reference.

The parts table/parts layout chart described in the first half was omitted on the page of the enclosed “Standard” version because these are necessary only for the “Kit” version. This will be assembled with the enclosed parts in accordance to the “Exploded view for case assembly.”

This will explain how to install and use middleware for Raspberry.

This is compatible for “Raspberry Pi first generation Model B+” and above. The case size is made for “Model B” series. Because it’s fastened in with screws, it’s impossible to use this with a “Model A” series. 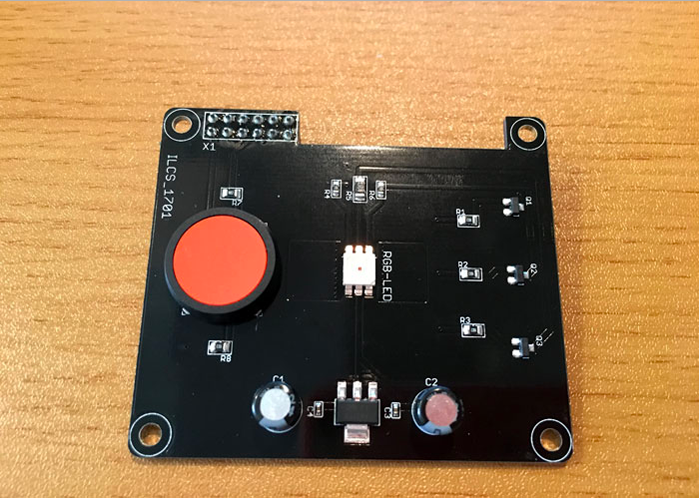 Let’s look at the Crystal Signal Pi body. The front side should look like the picture in Fig. 4. There should be four holes on each corner for screws to lock on to a Raspberry body. Including the size, it’s very similar to Sense HAT. In the middle, there’s a full-color LED enclosed in the section labeled “RGB-LED.” This mechanism scatters all the light in the acrylic rod.

The circular orange part on the left is the push button. Since this was the first time we’ve seen a part like this, we didn’t realize it until we actually pushed it.

This is the backside. There’s only a GPIO pin socket back here.
The GPIO pin that’ll be used for the Crystal Signal Pi will only be pin 12. Since the circuit board is cut for the other GPIO parts, you can freely use the available parts. 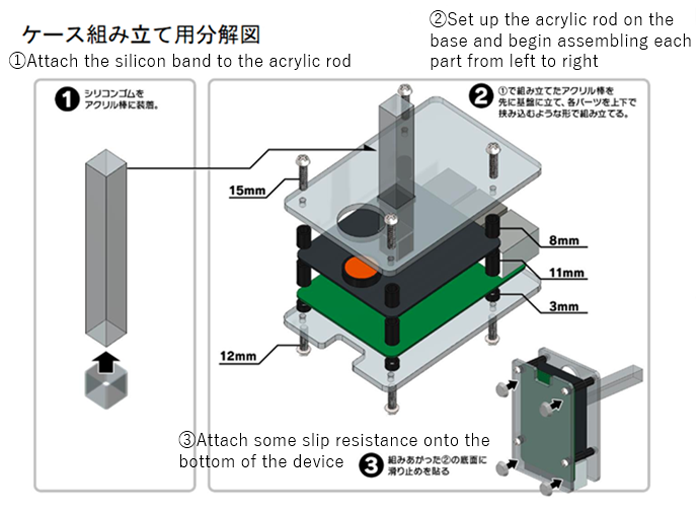 Details on the Crystal Signal Pi as well as how to assemble the case are described on page 3 of the “Assembly manual for soldering version” included in every package. 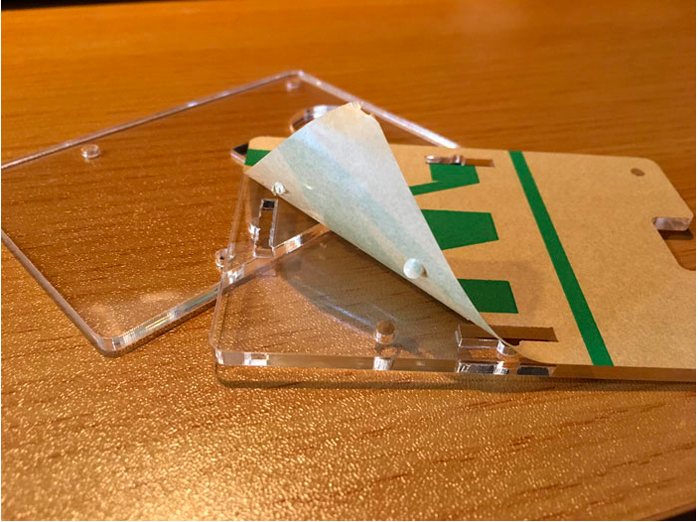 Before getting started, peel off the paper attached to the acrylic board.

#1. Attach the silicon band to the acrylic rod

It’s harder than it looks. Try to set the band to line up with the tips of the rod. 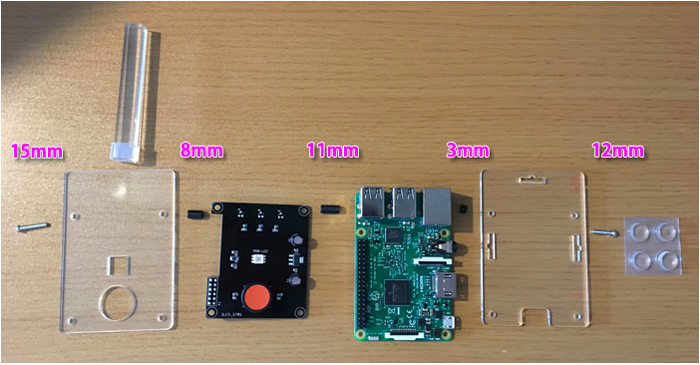 #2. Set up the acrylic rod on the base and begin assembling each part from left to right.

We’ll assemble in the same order as in Fig. 9, beginning from the left side. There are two types of screws and three different size types for the black spacer, so be careful not to mix them up. 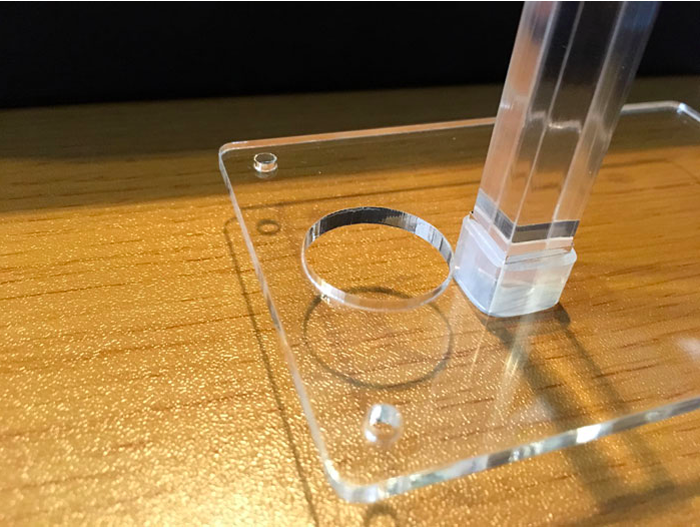 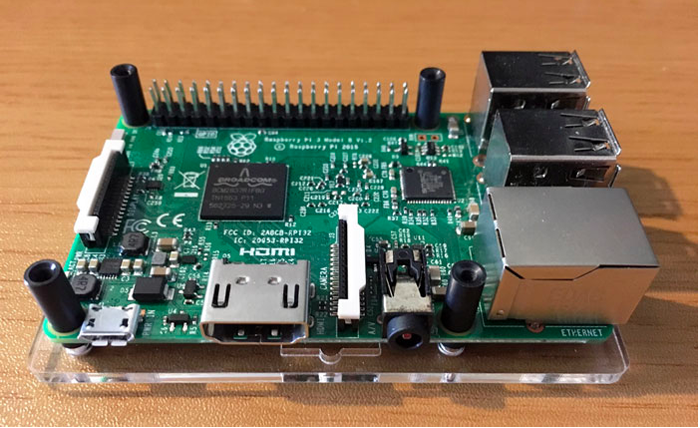 From the bottom half (12mm screws, acrylic board [bottom], 3mm spacer, Raspberry body, 11mm spacer), this is what it looks like assembled. Because both sides of the 11mm spacer have screws, this step may be fastened.

Afterward, set the Crystal Signal Pi, 8mm spacer, and acrylic rod onto the acrylic board (top) and fasten with the screws from the top. 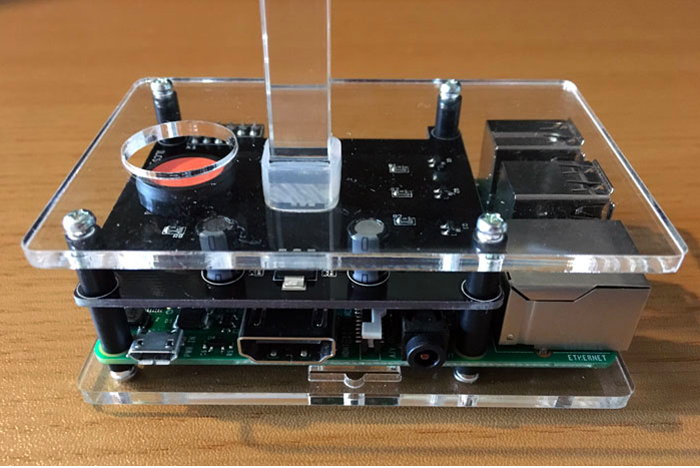 After assembling all the parts, it should look like this. 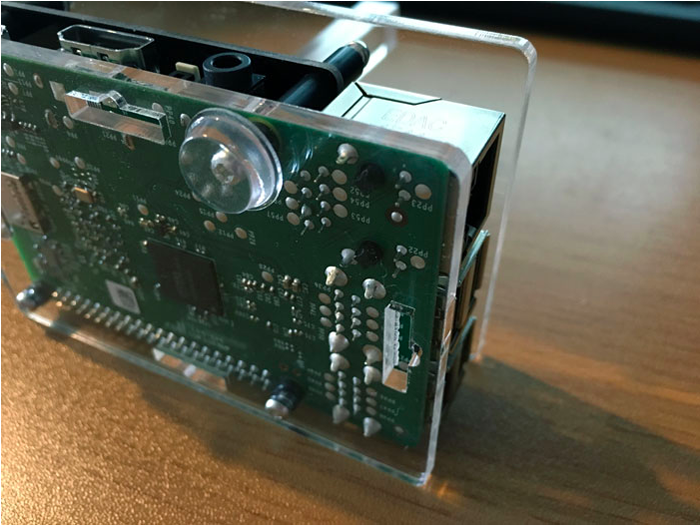 #3. Attach some slip resistance onto the bottom of the device.

Try to cover those screw heads on the bottom side.

We’re done assembling! Next, we have to set up the software for Raspberry.

Info on installing OS and Middleware can be found in the Software User Manual, but for the latest updates, check out the README section of the software repository (GitHub).

Set up your Raspberry Pi with an SD card loaded with a Raspbian Jessie Lite image file and turn the device on. With power on, the LED on the Crystal Signal Pi will turn on and change colors from orange to green (it seems like after turning green it’ll turn off if you have middleware installed already).

Starting up the Raspberry Pi, download the middleware specifically for Crystal Signal Pi and begin installing.

Because the file size is so small, the download should be relatively quick. Even installation shouldn’t take more than a few minutes.

It seems like before there was an OS update simultaneously, if we look at the README File on GitHub, we get the following message:

OS update commands can be done manually, but if you’d like to end all operations at once, type “fullinstall” at the end of the install command.

That should cover everything you need to get your Raspberry Pi up and ready!

Delving a little further, if there happens to be a middleware update, download the latest version of middleware and go to install command and include “update” at the end, as in the picture below.

Time to Try Lighting It Up

Access the Raspberry Pi IP via the network browser on your PC. 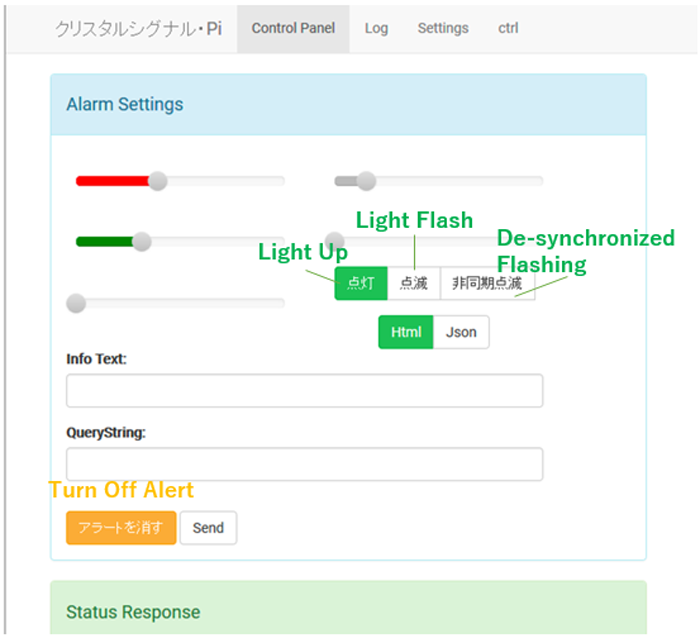 This is the default screen. From here, you can test out any of Crystal Signal Pi’s functions. 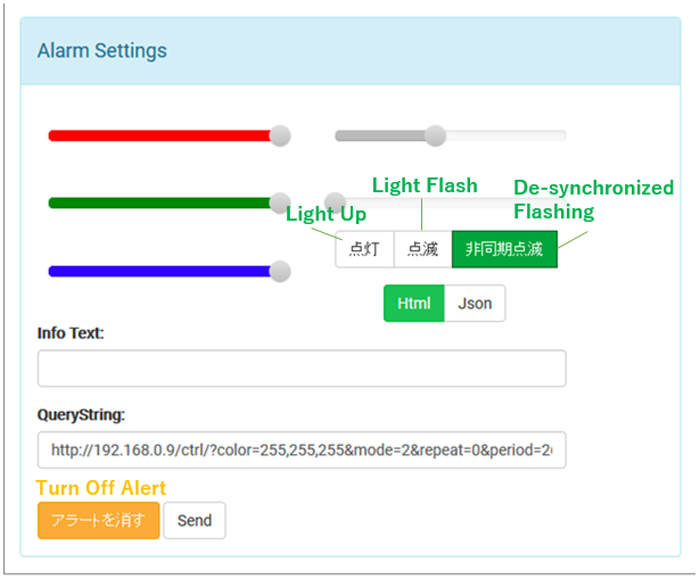 Like in Fig. 15, setting all colors to “255” and selecting “Non-synchronized light up” will…

The light scattering out through the acrylic rod looks beautiful! We’ll go more in-depth about all of these functions next time. When you want to turn off the lights, at the bottom of the “Alarm Setting” window, press the “Turn off Alert” button.

From assembling the case to installing the middleware, that just about covers everything you need to get your Crystal Signal Pi up and ready.

The full-color LED light coming out of the acrylic rod is gorgeous! Even if you don’t plan to use this as a caution light anytime soon, the lights still make for some great interior design.

In the next article, we’ll be covering how to use the middleware, other functions of the Crystal Signal Pi, and more.