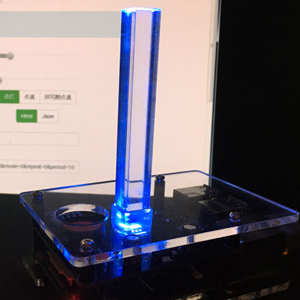 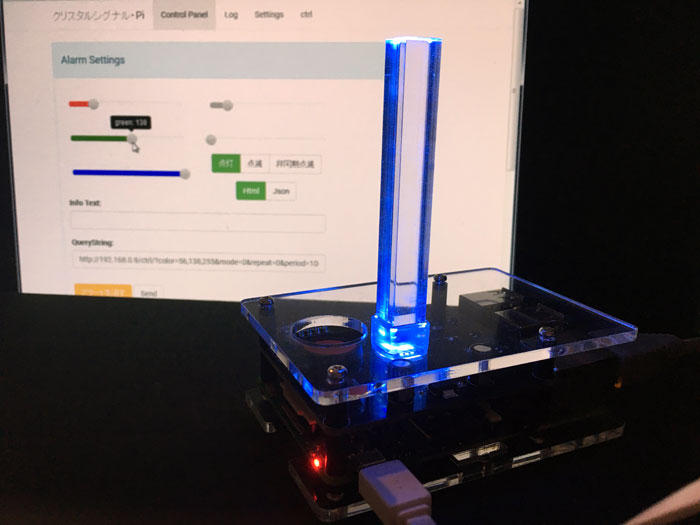 The second entry in our “Crystal Signal Pi” series will focus on the middleware.

On Crystal Signal Pi middleware, there are four menus on the panel: “Control Panel,” “Log,” “Settings,” and “ctrl.” Because you can easily check on the light-up patterns, it’ll be extremely helpful when working on DIY projects using Crystal Signal Pi in the future.

Let’s look at how to view and use each screen.

In this article, we’ll be using the same Raspberry Pi setup that we used last time.

As soon as you access the Raspberry Pi IP address from the browser, we’ll get started. The IP address used in this article is “192.168.0.9.”

The ‘Control Panel’ and ‘Ctrl’ Screens

For more info on how to use the tools check out the Software User Manual, or for English information check out GitHub (As of August 2017, it seems like GitHub has the newer version). 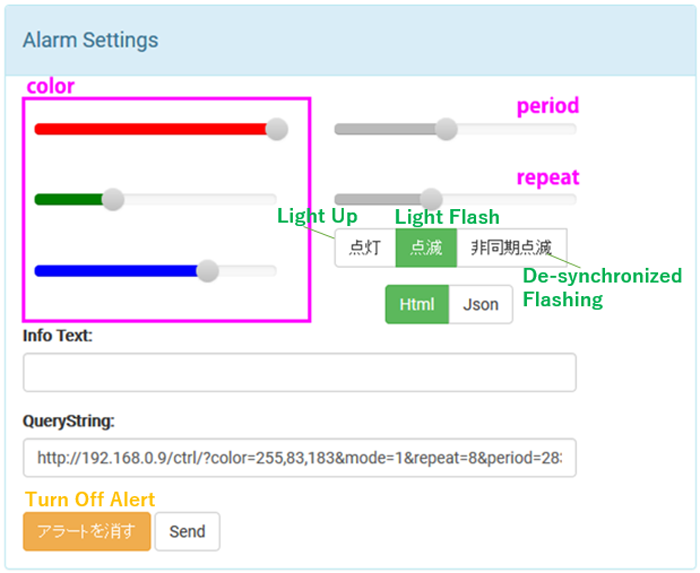 How to use Web UI Function

There are three light-up types for the LED lights. You can set these up by using the buttons.

Selecting a color can be done here by moving around the slider. For a more detailed breakdown on each programming, refer to the table from the “How to use API functions” PDF.

How to use API functions

The color select on the upper left side of the screen can be adjusted easily.

“Info Text” allows you to set the character strings for the service agreements.

The URL character string with parameters included is automatically displayed on the “QueryString” column.

For example, when setting up the parameters for the middleware in the beginning, a URL like below will be displayed (Clicking on the “Send” button brings up the window).

Moving the sliders, pressing on the buttons, or just playing around with any of the operations will begin each function every time (it will run send). When stopping an operation, try pressing on the “Turn off alert” button. Or, if you’d like to resume with the same values, press the “Send” button. 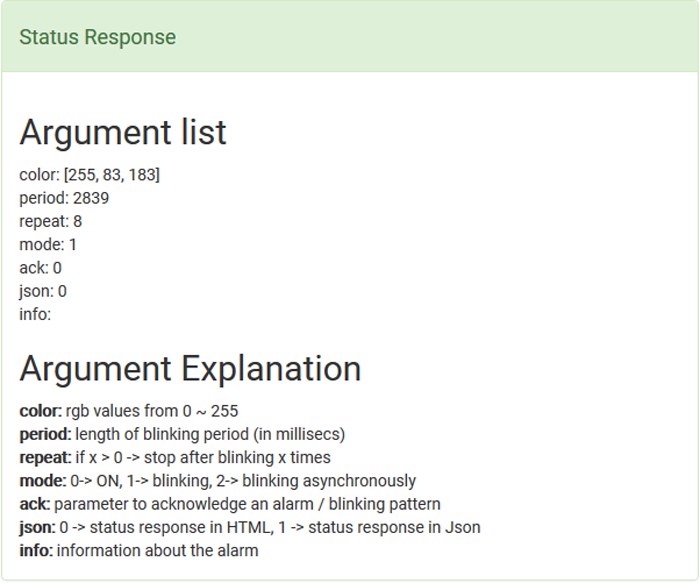 This is the “Status Response” window. When inputting “Html” in the response window, info on parameters will be displayed on this window.

When “Json” is selected, the character string will be in JSON format like in Fig. 3. It looks like this method is used for whenever you’d like to pass along any of the values to the programmer’s side.

On the “Log” screen, you can look at and check all past operations done on “Crystal Signal Pi.” 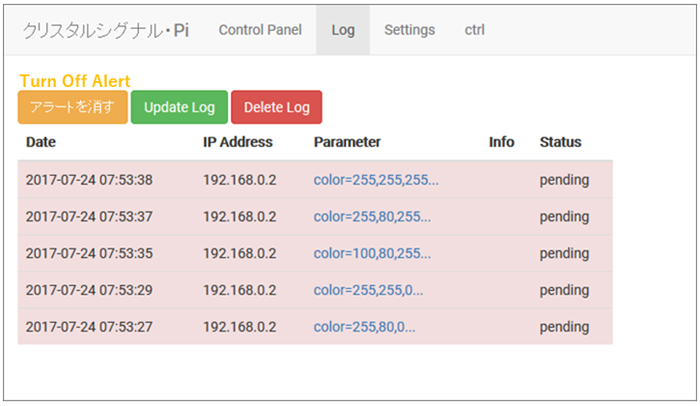 Whenever operations are done on the browser, the logs will be changed in real time accordingly. However, the logs aren’t updated automatically when there have been changes to the program or button operations (We’ll get to that later). Instead, you’d have to use the “Update Log” button.

When an alert is on, it’ll display “pending” in the status line with each line highlighted in red like in Fig. 4. 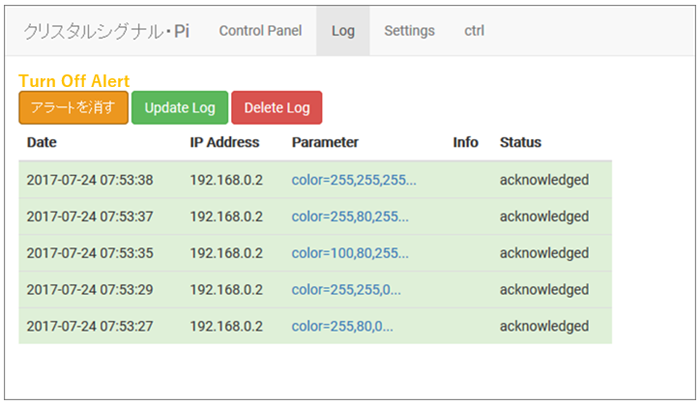 Clicking on the “Turn off alert” button will switch the alert off and change the status to “acknowledge” with a green background indicating this.

When a LED light isn’t lit up even though an alert has been turned on (red background color), such if you were to have RGB set at all 0, for example, the system will think that the number of flashes have been met when set at “Light flash.” This is convenient for times when you can’t tell just by the way the LED is flashing.

If you were to click on the “Parameter” line, it’ll bring up the speech bubble indicating all the parameters. 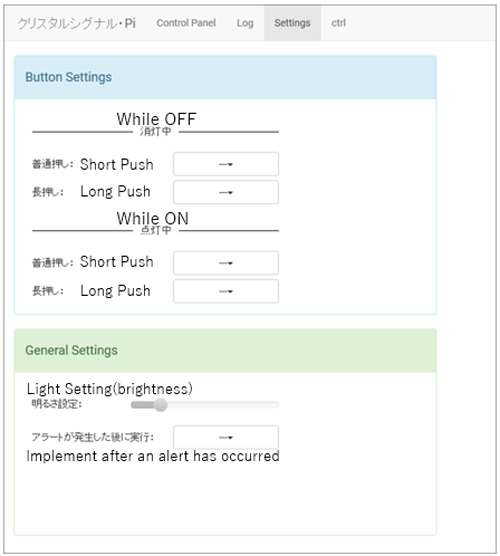 Admittedly, the first time I saw the “Button Settings” window made me realize that these buttons even existed. It was then that I started looking for where that one main “button” could be. 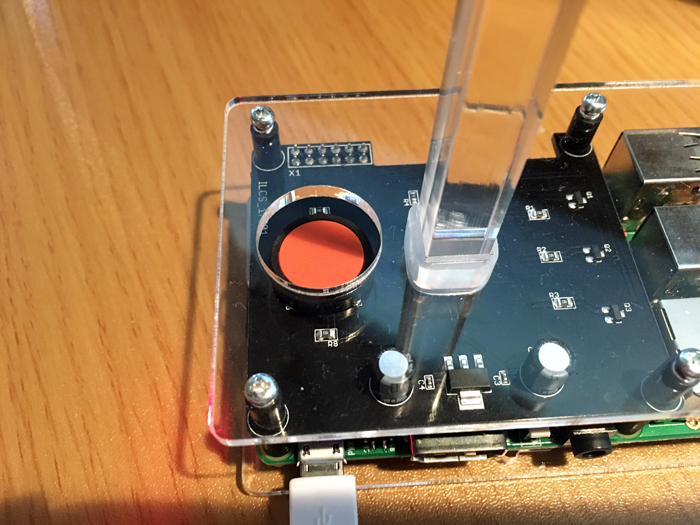 On the acrylic board, there’s a round, orange-colored part totally removed from everything else. This is the button for Crystal Signal Pi. I wonder if it’s because of the size, but the button is a little sturdy (try pushing it all the way until you hear a click). Afterward, hold down the button for a while for it to register.

You can set total of four operations; “normal short push” and “long push,” for both “while ON” and “while OFF”. 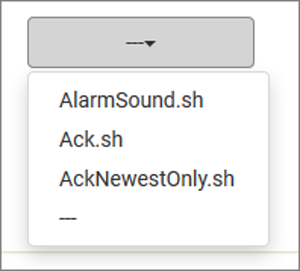 Clicking on the drop-down window will display a list of all the programs that can be used. By default, there are three types of scripts prepared (As of August 2017).

“Ack.sh” and “AckNewestOnly.sh” show the difference when multiple alerts are generated. In Fig. 10, after two alerts have been sent, it’ll register as if each script has been implemented via button. (In the Fig.10, to tell by the IP the alerts were sent from two different IPs, one from each IP.)

“Ack.sh” deletes all the alerts. For “AckNewestOnly.sh,” only new alerts (alerts sent from the top row/after) will be deleted, placing previous settings active.

Going to “Light up” and setting the “Standard push” to “AckNewestOnly.sh,” we tried sending out alerts from two terminals.

After sending five alerts from orange→yellow→white→pink→blue, in that order, for the first button operation, we went back to pink, and then continued with white→yellow→orange→turn off. Doing it like that, you can always go back one step before.

Each program file is stored in the location below. Whenever you want to add new programs, try making them in this directory.

Even if “Implement after an alert has occurred” in “General Settings” is toggled on, you can set this operation up as you would with a button. In the “Light setting,” you can set the brightness of the LED from 40% to 100%.

This setting will be saved even after a restart or reboot.

That goes over how to use the middleware on Crystal Signal Pi.

By looking at how to play around with the middleware, we got a good idea of what kind of functions Crystal Signal Pi can handle.

In next article, let’s try making some tools on Crystal Signal Pi!