How Does the Raspberry Pi Compare to Computers of the Past? 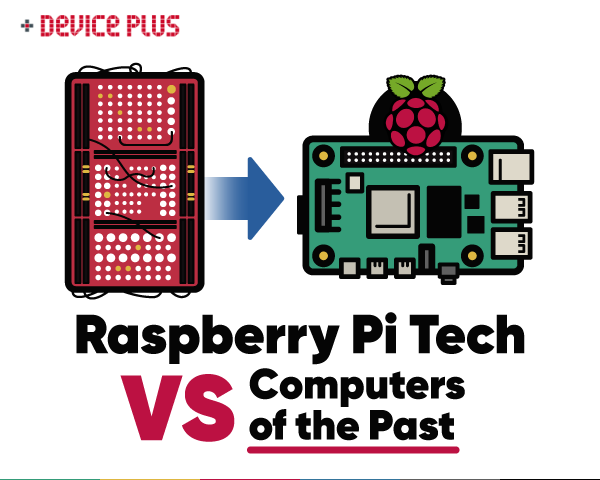 You can build drones, lights, and more with Raspberry Pi. However, this technology stands on the shoulders of computing giants. Let’s take a closer look at how Raspberry Pi’s capabilities compare to the past. We will look at both hardware capabilities and cost factors to put the Raspberry Pi into context. Note for cost comparison purposes, and we estimate the Raspberry Pi 4’s price as $35 to $55.

Simply copy and paste the code below and you can share this infographic on your site:

Birth of Computers: The 1946 ENIAC

Developed in the aftermath of the Second World War, the ENIAC represented a significant advance. Prior devices were designed for a single purpose, such as breaking codes. In contrast, ENIAC was built to process a variety of instructions.

Compared to Raspberry Pi, ENIAC is a giant. The ENIAC device took up 1800 square feet – that’s larger than many apartments! The Raspberry Pi can fit in a pocket. In terms of hardware capabilities, here are some points of comparison:

Comparing the first computer to a 2012 machine is not exactly a fair competition. The comparison in capabilities is a bit more balanced when we look at the world’s first supercomputer.

Unlike the ENIAC, the CDC 6600 was produced for a small market of one hundred customers. The device’s programming interface had two options: paper punch cards and magnetic tape. From a hardware perspective, the machine had 400,000 transistors (a piece of hardware unavailable in ENIAC). Now let’s consider how this supercomputer, the champion of 1960s technology, compares to the Raspberry Pi 4.

So far, we have compared the Pi 4 to industrial-scale computers. In the 1970s, computers for consumers began to become available.

The Commodore is one of the best-loved computers, along with the Apple II of the late twentieth century. Unlike prior computers we have looked at, the Commodore was designed for consumers. It could fit into a consumer’s home, and it had a relatively affordable price. From a hardware perspective, here are a few points of comparison between the Pi 4 and the Commodore.

While the Commodore device was groundbreaking as a product aimed at consumers, it was still challenging to use. From an ease of use perspective, Apple II was a leap forward. Let’s compare and contrast it to the Raspberry Pi 4.

Now let’s turn to the mobile device revolution, which changed significantly in 2007 when Apple unveiled a new device.

The Revolutionary Smartphone: The 2007 iPhone

Cell phones had already been around for decades before the iPhone was released. The Apple iPhone represented a significant leap forward in capabilities. Let’s contrast the original iPhone’s hardware with the Raspberry Pi 4, which was released in 2012.

What Will You Do With The Raspberry Pi?

The Pi 4 is a special computer. It is cheaper and much lighter weight than historical computers. It may not come with a keyboard and a display. However, you can still do amazing things with this lightweight computer. Here at Device Plus, we introduce a lot of DIY-projects you can build using Raspberry Pi. To get you started on the Pi 4, check out our post for a beginner-friendly project like these;