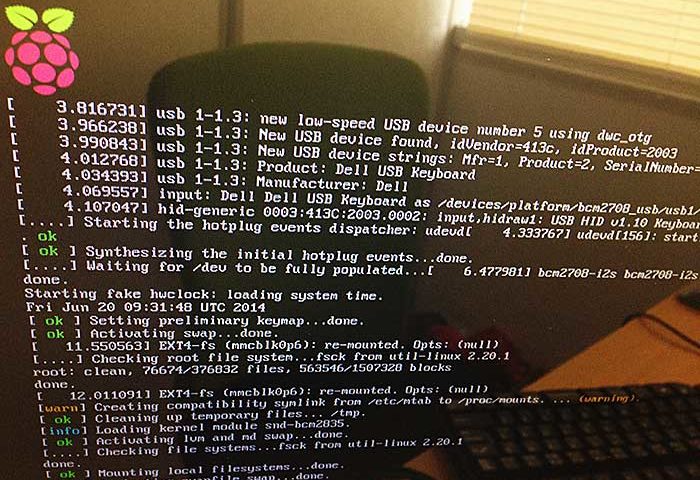 Last time, I talked about the exterior of the Raspberry Pi, getting the necessary parts ready and connecting them. But, one of the most important part, preparing and installing the OS, was still left to do. This time, I want to install the OS and complete it to the point where the Raspberry Pi can start up, all in one go.

It seems like things will get a bit harder from here, but it won’t be long until the foundation of the Raspberry Pi is completed!

The Raspberry Pi uses an SD card instead of memory or a hard-drive. But the SD card is not included, so I’ll download the files onto my SD card. Then let’s turn away from the Raspberry Pi temporarily, and go back to work on the Windows machine. 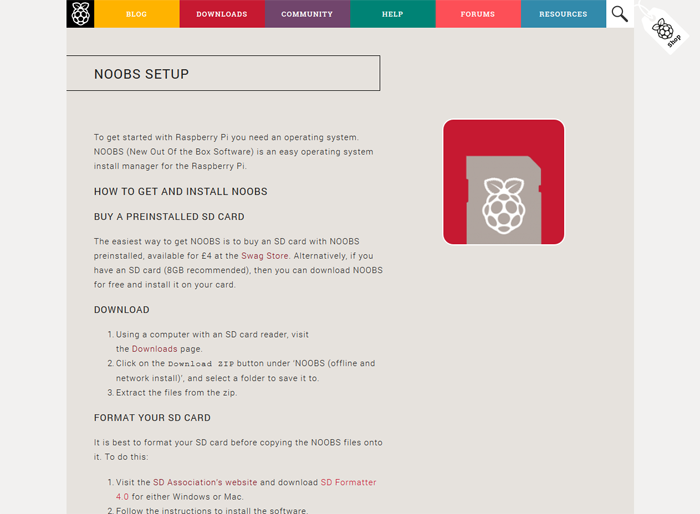 This is page 3 of the official help I talked about at the end of last article. The page has been renewed, and the video can’t be found there anymore.

The video itself was still left, so I’ll move forward using this as a reference.
The girl in the Raspberry Pi t-shirt will teach us with the real thing. (That Raspberry Pi logo SD Card is cute!)

First I’ll download the OS file from the official site.
There are various types, but this time I downloaded “NOOBS”, the same as in the video. 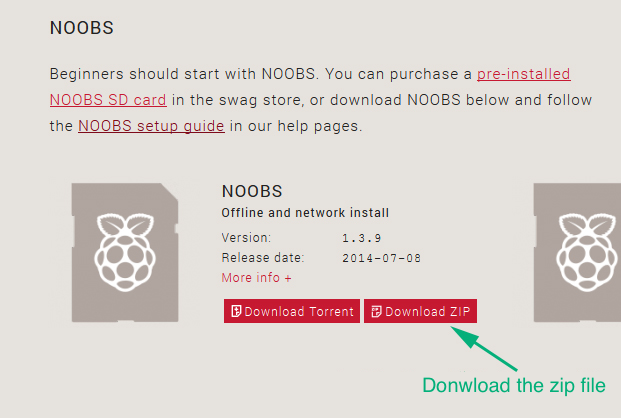 At the beginning of the “NOOBS” instructions is “Beginners”, so it seems beginners would be well advised to follow them from here. At present time, the newest version of “NOOBS” is 1.3.9, and the file size is about 1.3GB. Downloading it takes around 30 minutes.

I thought first I would extract the files….but when I double clicked on them there was no response. Huh? Does the extracting software not working?

After looking into it, apparently special software is necessary for large size compressed files. This was my first time with such a big compressed file, so I didn’t know!

ALZip
I used this free software!

I could extract it with no problems. So, following the video, there’s one more thing to download. As instructed, I try accessing “www.sdcard.org”. In the header, there’s a link for “Japanese”, so I go on to the Japanese page. Finally, the page I come to is this.

I see! The SD card I install the OS on has to be formatted! It was my first time to learn that there was special software for this too.

There’s a manual. So, I use it as a reference for the downloading and the installation.
Then, I connect the SD card to my PC. 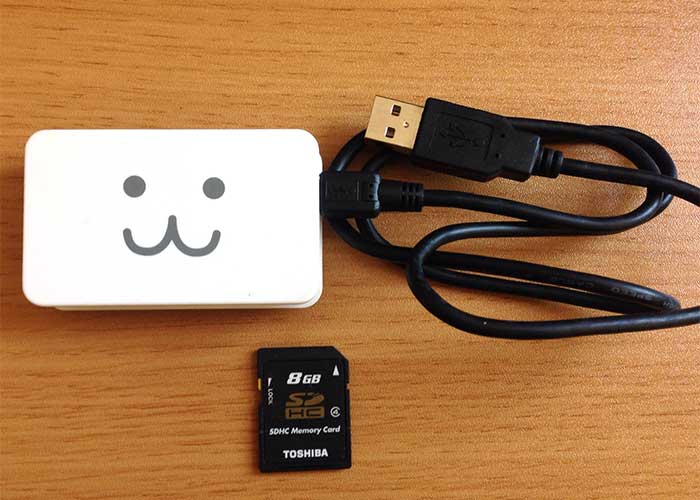 This is an SD card and a USB SD card reader (My favorite is made by Elecom!). I connect this to my Windows machine, and start the “SD Formatter” I just installed. 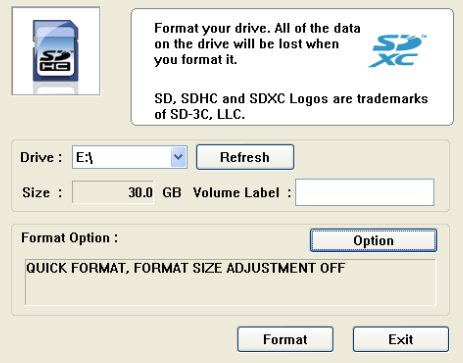 This is the default screen. The same screen is shown at about 2:15 in the video, so I go forward looking at that.
With “Drive” I check that the drive the SD card is inserted into is selected.
As for “Volume Label”, just in case, I match the video and input “boot”.
“Format Option”…seems to be a little different from the default (here, I regretted not using the English version after all).

My environment (default) is “Quick Format, Logic Size Adjustment OFF”.
The settings in the video are “FULL(Erase) FORMAT, FORMAT SIZE ADJUSTMENT OFF”, it seems best to only change the settings related to the formatting method.

I click the “Option Settings” button, and select “Erase Format”.
When I clicked the “Format” button, formatting started! 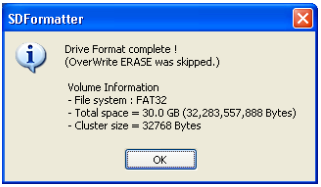 Before I could take a screen shot, it had finished!
(Looking at the results, it seems like the format settings weren’t necessary)

At last, I’m going to install the OS onto the Raspberry Pi itself!
I’ll go forward and continue using the video as reference. At around 2:25 in the video, the install process is explained.
First, I copy all of the contents of the extracted “NOOBS” folder onto the SD card. It takes about 2 or 3 minutes. 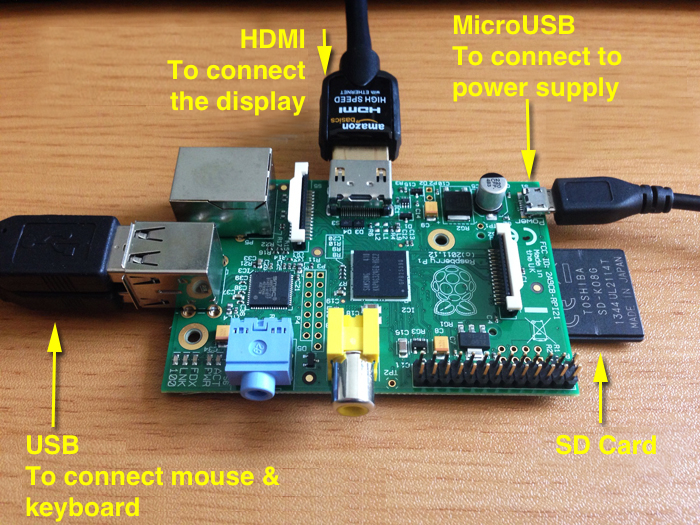 I set up the SD card, HDMI cable connected to display, keyboard, mouse and power cord. Maybe because they’re new, or because there are more cords, they were really hard to put in!
If you use all your strength it seems like the device will break, so you should be careful. Personally, the hardest one was the USB.

When you give it power by popping in the power cord, it starts installing by itself!
From here, I’ll add some screen captures from the video with my explanation. 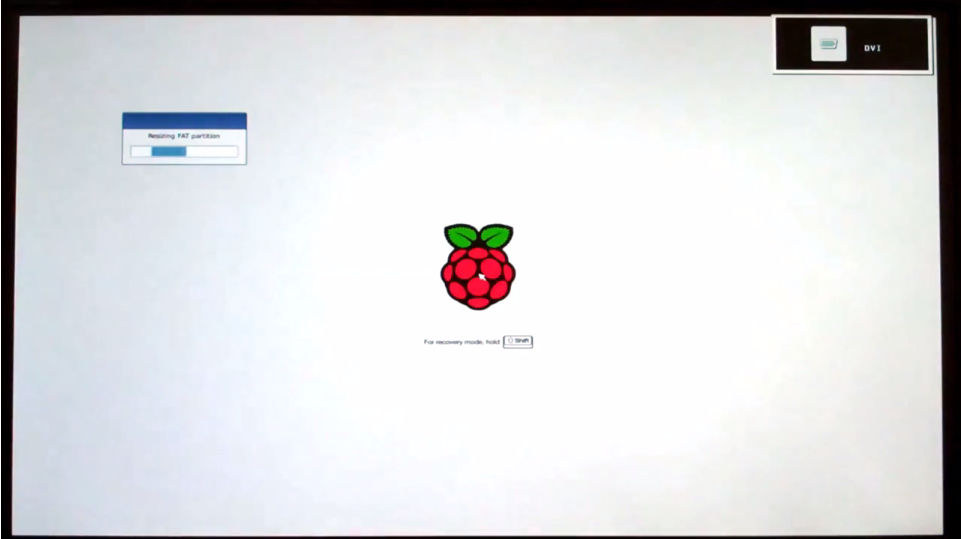 From about 3:05 in the video, the actual install screen appears.
When the SD card is recognized, a screen with a raspberry image is displayed. A pop-up box immediately appears, and it seems you can choose which OS to install. 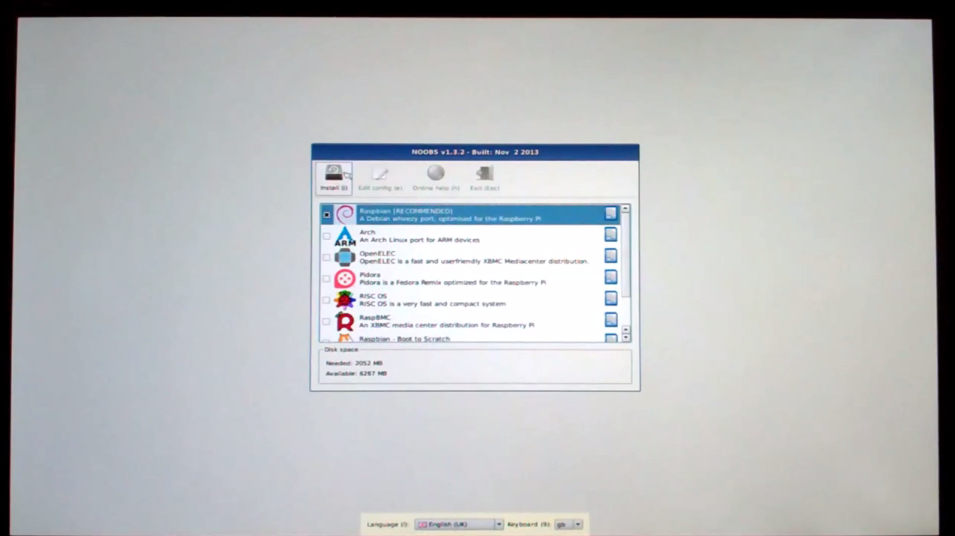 As a test, I tried selecting Japanese from the selection box for language settings at the bottom of the screen. And it immediately displayed in Japanese… is not how conveniently it went, but for now, I’ll go forward as is.

This time, I’ll install “Raspbian”, so I check the OS at the top and click the “install” button. The installation begins right away. 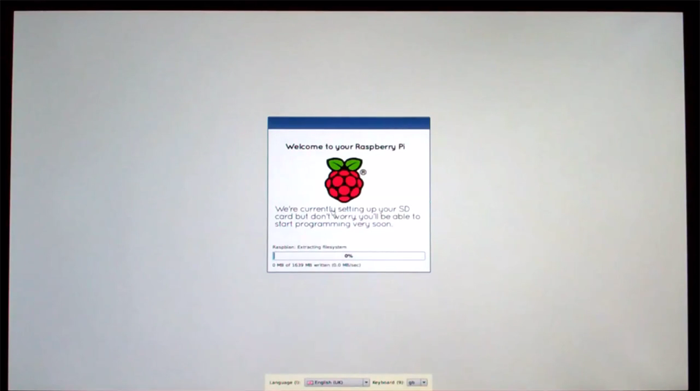 It took about 15 minutes to complete the installation. During the installation, messages and images change in the pop-up.
When the status bar reaches 100%, an alert appears saying “OS(es) Installed Successfully”.
It looks like it was a success, so I click the “OK” button and it switches to a black screen. 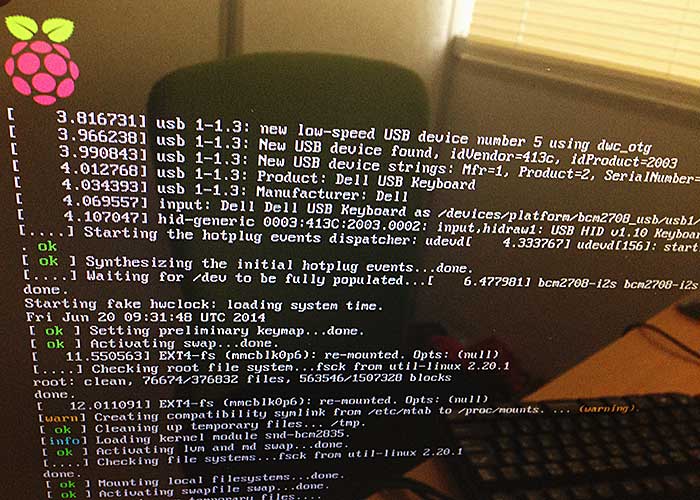 This is an actual picture. (There’s glare and a lot of things reflected…) This was the only picture I could managed to take where you can see something! I watch the white text scrolling by. 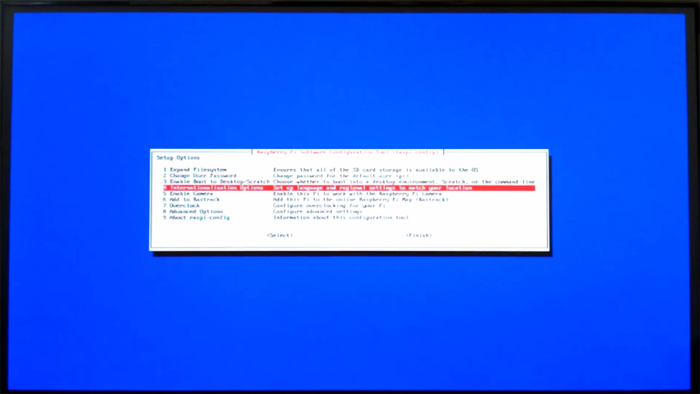 After waiting a little, this time it changes to a blue screen that says “Setup Options”.
You can’t use the mouse on this screen, so you move using the keyboard. The up and down keys move the cursor, and with the right and left keys you can choose “Select” and “Finish” at the very bottom. It seems you can use the Enter key instead of “Select” as well.

In the video, she sets the time zone in “4 Internationalization Options”, but my characters were changed to “■■■■” so I couldn’t change the settings. It might be because I changed the language to Japanese before the installation. I might be able to correct the settings later, so for now I’ll continue as is.

[Edit: 2/2/2015] In the next article I successfully got rid of the corrupted characters!

When I select “Finish”, the blue screen shifts a little and below a white string of characters scrolls like the black screen we saw before.

When it stops, input the following: 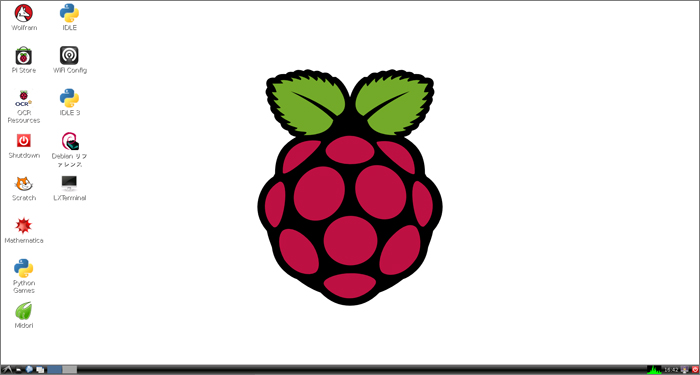 I did it! I did it! It booted successfully!
(This is a screenshot I made using a tool, but I’ll talk about that next time)
There are some desktop icons, so it seems there are some default programs pre-installed.
I thought it would start completely empty with nothing there, so I was surprised.

How to Shutdown the OS?

Before working on the settings, I want to practice closing the OS. There’s no video about that, so I will grope around, and continue on my own.
First let’s search for the “shutdown” function.
In Windows the start menu in on the bottom left, so I tried clicking on the gray icon in that same area.

Something like the start menu appeared!
Something similar to shutdown…. “Logout”, maybe?
“Hm? Logout? From what?” I thought, but I couldn’t find anything else similar, so for now I try clicking it.

A pop-up appears. I wonder what “LXDE Session” is?

LXDE
Lightweight X11 Desktop Environment is a free desktop environment with comparatively low resource requirements. This makes it especially suitable for resource-constrained personal computers such as netbooks or System on a chip computers.

The “logout” is from the “desktop environment”, so I wonder if it means closing only the OS. I’m used to the Windows environment, so I feel a little uncomfortable.
When I click “logout”, I can go back to the same black command line screen as when it booted!
Well, I returned to this screen, so it seems like it’s necessary to input something to end it.
Of course pulling out the power cord like this makes me uneasy, so I’ll look for the correct way to end it.

FAQs – Where is the on/off switch?

According to the FAQ, you input like this.
“sudo” appears to be a Linux command. I decide to investigate the meaning later, and quickly put in the command. The display disappears, and I can shutdown the OS with no problems.
It seems the “PWR” light doesn’t turn off until you unplug the power cord.
The Raspberry Pi itself gets really hot! I feel like I understand now why PCs have built-in fans.

I finally made it to the booting! That took a long time!
This far is the minimum you have to do in order to be able to use a Raspberry Pi.
The help videos on the official site are very easy to understand, so I could move forward with confidence.
This is what I expect from an educational computer! Even someone like me who can’t read English, doesn’t know Linux and is bad with machines could do it!

Next time I want to take a look at the contents of Raspbian, which I installed this time, while studying Linux commands and the parts that I made it this far without really understanding. While I actually make it work and use it, I want to search for a goal of what I want to do with this Raspberry Pi!