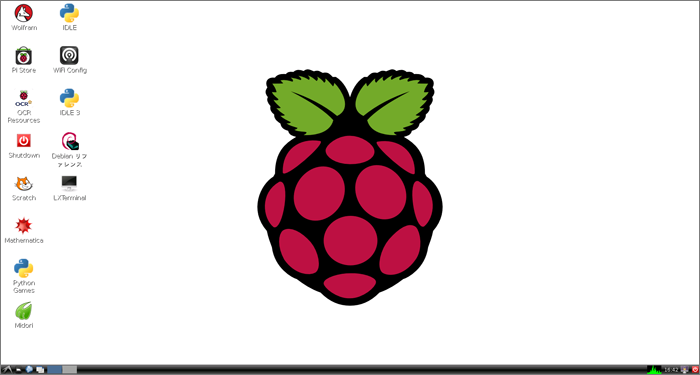 Last time, we were finally able to set up the Raspberry Pi! From now on, we should be able to have more fun, so I’d like to learn more about the computer while figuring out what we can do with it.

First off, considering that I’m going to be writing more of these articles in the future, I want a tool for taking screen captures! So, our first Raspberry Pi mission is going to be installing the screenshot utility (personal interest, sorry!). After that, we still have to set up the time zone. I’m also going to do some research on the Linux commands that I skipped previously, and not leave any questions unanswered!

I finished the installation previously, so now the OS should boot immediately!
I connected the components just like last time, and turn on the power.
White letters appear on a black screen…

Already a dead end. Huh? How do I login?
I try looking it up in the manual, and find the answer in the installation manual.

HELP – NOOBSSETUP
The default login for Raspbian is username “pi” with the password “raspberry.”

It was written in the part where it says “Logging in and accessing the graphical user interface”, the first paragraph from the bottom.
So, the default username is “pi”, and the default password is “raspberry”. I’ll have to change the password later on.
In any case,

“Startx” is the command to start up X-Window. “X-Window” is Linux’s GUI environment (or so I’ve heard, but honestly I’m not too sure). Remembering that it’s the command to summon Raspbian should be enough. 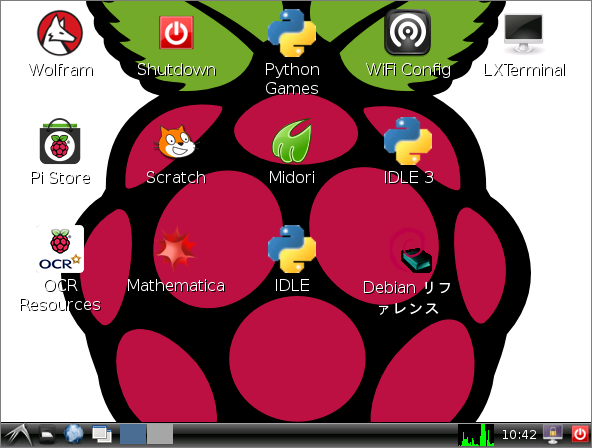 I’ve successfully started the computer! Or so I thought, but the resolution seems strange (speaking of which, I think the screen resolution was low when I was putting in the commands, too).
It seems it doesn’t adjust the settings automatically if you don’t connect the monitor starting the computer.
Just when it has finished starting up, I have to restart the computer. I log out, put in the command, and unplug and plug the power cord. After three tries, I’ve gotten pretty good at this.

This time it works! I managed to get back to where got when I started up the computer for the first time.

I Forgot to Connect it to the Internet!

Come to think of it, LAN wasn’t a part of the minimum requirements.
I couldn’t find anything in the official manual, so I’m going with my gut. There is an Ethernet port, so I try to plug in the Ethernet cable.

The FDX and 100 LEDs light up, and LNK blinks. Maybe this was really all it took to connect to the Internet!? Without much hope, I open the web browser to check the connection.

You can open the web browser from the menu bar (above picture). It’s the third icon from the left, the one that looks like the earth. It says Web Browser when you put your cursor over the icon. I double clicked the icon to open the browser, and tried typing in Google URL. 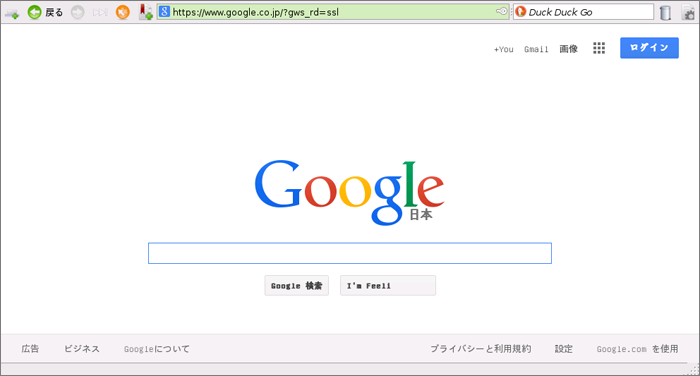 It’s connected!
That was far more straightforward that what we went through until now! It was so easy! I just had to plug in the Ethernet cable. There doesn’t seem to be any settings required.
It was so easy that there was probably no need to prepare a “help” in the first place.
(*This applies only if your router has been configured to use DHCP so that Raspberry Pi can obtain your IP address automatically. If DHCP has not been configured, you will have to enter the IP settings manually.)

Let’s Give the Remaining Settings One More Try!

We have managed to connect to the Internet, and arrive to a point where we can have all sorts of fun with Raspberry Pi. However, before going further, I would like to change my password. Which reminds me that last time I failed trying to set up the time zone. So, while we’re at it, I’m going to take care of that too.
Therefore, I would like to go back to the blue screen that appeared during the installation!

First, I would like to find a solution for the time zone setup corruption problem.
Apparently, I need a software called “jfbterm” to solve this problem. I log out of Raspbian, and start from a black screen. 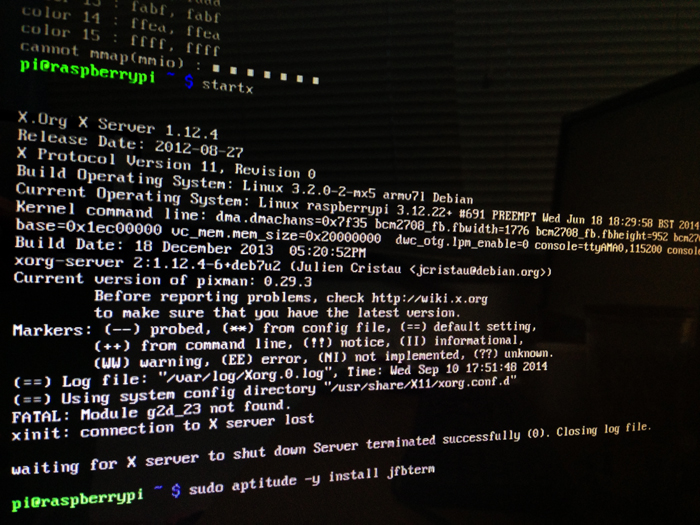 It’s a bit hard to see, but this is the actual screen. The line at the bottom is the command I entered.

sudo: running programs with the privileges of the superuser
aptitude: command to control packages
-y: respond Yes to all enquiries
install: install package

This seems to be a command to force the installation of a package called “jfbterm”.

When I run the command, white letters begin to appear. They are corrupted, but I wait until they stop. This is what appears when they’ve stopped:

I enter the package name one more time (does this run the command?).
The white letters begin to move! They instantly return to the command line.
The font seems to have changed… I move on to the blue configuration screen.

This command displays the blue configuration screen.
It was displayed automatically during the installation, but after that you need to enter a command.

This first screen is still in English.
I first select “4 Internalisation Options”, and then “12 Change Timezone”. 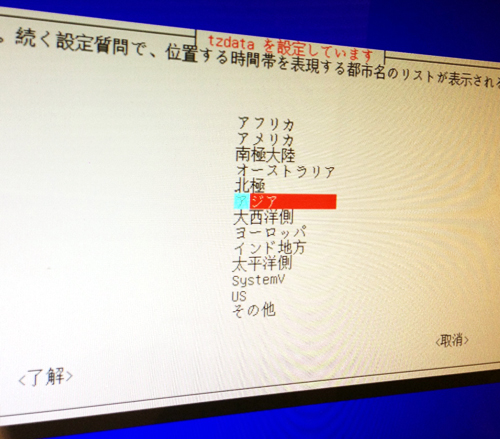 The language changed into Japanese! And the font changed into Mincho (a Japanese type font)! This reminds me of some old computers.
The corrupted text problem is now solved. I can finally set up the time zone. I select Asia, and then Tokyo.

Looking closely, below the blue frame of the screen it says “Enter new password”. The cursor is moving, so I enter the password as instructed.
Nothing appears even when I press the key, but I enter the new password twice, including the re-entry.

If you get this message, it means it worked!
When you select “Finish”, the cursor moves below the blue frame, so you can return to the black command line screen by entering

It seems that we remain logged in even if we change the password, so we can start up the OS.
Security-wise, it might be better to change the username as well. But for now this will do.

Getting the Screen Capture Tool!

I tried to press the Print Screen button, but the computer couldn’t locate a graphics editor so I never found out whether it works or not. I tried checking the menu bar as well, but I couldn’t find anything.
It seems we need a software for that. As it’s not included, I probably have to download it somewhere.
Download… I wondered this a moment ago when installing jfbterm. What should we download and from where?
I was doing research on Raspbian when I found in the description that is a “Customized Debian”. I wonder if this means I should download software made for Debian. I’ll look up Debian next.

To paraphrase the text, the thing people want is application software: programs to help them get what they want to do done, from editing documents to running a business to playing games to writing more software.
Debian comes with over 37500 packages.These packages offer precompiled software in a fixed format for an easy installation and upgrade, and they are all free.

When reading about Debian, I noticed that they seem to be calling software “packages”. It’s amazing to see that it’s all free! The metaphors used on this site to explain the concept of free and their reasons for free distribution are easy to understand, and it’s really interesting. Raspbian is a “customized Debian”, so you can use Debian’s packages without having to modify them. Let’s then look for a Debian package that provides a screen capture tool.

Debian packages
You can search for packages, but I couldn’t find good results in Japanese, searching in simple English seems a better option.
Next, I’ll install a package that can take screenshots!

kSnapshot
kSnapshot allows you to take captures of your screen. You can capture the entire screen or just a part of it. You can also capture different windows or a part of a window.

Besides the “aptitude” command mentioned previously, there are also other commands to control packages, like “apt-get” and “dpkg”.
aptitude: an even stronger command than apt-get
apt-get: automatically obtain also packages that have dependencies
dpkg: obtain packages without confirming dependencies
Basically “apt-get” which confirms a lot of things automatically seems to be the best choice here.

Next, I’ll install the package!

The syntax of apt-get is

Therefore, in this situation, I will type in

This will carry out everything from the download for the installation, so I leave the Option value out.
You need to stop once in the middle of the process and select [y/n]. (I looked this up afterwards, it seems to be confirming the capacity.)
I watch attentively as the white letters run across the screen and notice… Many of them say 404 Not Found. And when I thought it’s stopped, I got a message saying “missing” appear. It seems I’ve failed.
I investigate for a bit. Seems like I’m missing an update for a package.

The reason for the error seems to be that the list on the server and on the list on the package locally didn’t match.
I perform an update for consistency.
You should probably remember that “apt-get update” and “apt-get upgrade” together make up one set.

“apt-get upgrade” was a bit time-consuming, but now everything is ready.

I’ll try to install Ksnapshot one more time! This time, no 404 error message popped up, and the installation was done in 15 minutes.

I use the startx command to start the OS, and in the menu bar I can find KSnapshot under “Graphics”. 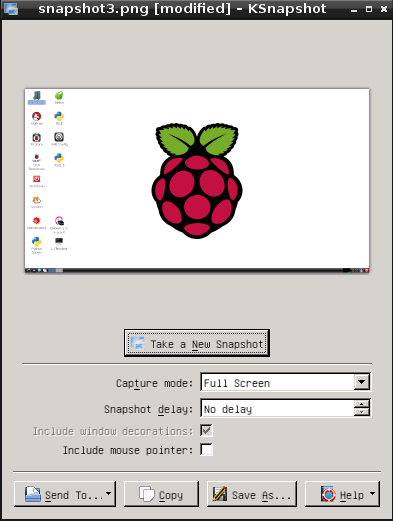 I could open it!
When I click “Take a New snapshot”, I can take new screenshots. You can specify the range in Capture mode, and in Snapshot delay you can set up a timer for taking a screenshot.
(I used this tool to take a screenshot of the menu bar.)
The software is simple but surprisingly functional. I’ve found a tremendous ally for writing articles!

After going back and forth, and running into all sorts of problems, I’ve finally learned the ropes of Raspberry Pi’s environment!
I feel like I’ve somewhat understood the meaning of the commands that I just typed according to the manual.
After all of this, I’ve started to think that electronic kits are not used to create but to raise something up.

Next time, I will introduce you to the icons on your desktop, and familiarize you with some useful tools like shutdown.
Little by little, I’m getting over the feeling of being bad at this! I would like to continue growing with Raspberry Pi.