In the first part, I’ll explain you how I made a case for the Raspberry Pi. I could have purchase a case, but I wanted to try to make one by myself. I’ll give you some simple instructions on how I did it.

In the second part, as I promised before, I’ll introduce you the preinstalled software. Since I turned on the Raspberry Pi for the first time, there were already some icons on the desktop. Because they came preinstalled, they might be some convenient pieces of software. This is my first time with Linux, and I keep thinking that I need to study more.

I made my own case!

First, I checked out what kind of cases are available. There are many cool cases, from cute and practical cases your can purchased, but there are also many original cases that people made!

For the Raspberry Pi, you need to make holes in the box to plug the power cord and use the USB port. However, I don’t how to use the tools and I don’t have the skill to make a real case, but I want to try as best as I can… On a website, I saw the picture of a Raspberry pi case made of Lego, so I decided to try and make a case using blocks.

Here is what I choose. 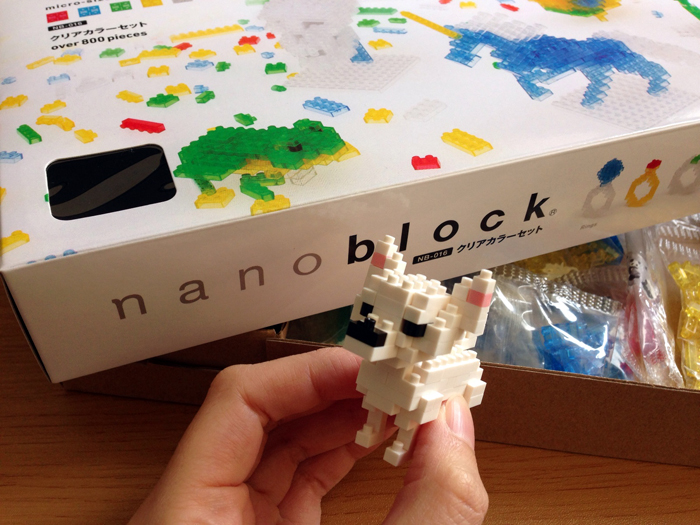 It was so cute I took the picture with my Chihuahua!

I will use Nanoblock to create a case from scratch. One Nanoblock piece is 4mm on each side. It is really small! I will assemble these blocks to create the case I want.

The case I made is for the Raspberry Pi Model-B. I used a 800-piece clear color Nanoblock set.
The picture was taken with an assembled Chihuahua from a set!

How to Create an Arduino Case with Nanoblock

I will show you how easy it is!

First make the foundation.
The actual Raspberry Pi is 85mm x 56mm, but you need to leave some space for the connectors and SD card. I used 20 blocks for the length and 28 blocks for the width, and it matched up perfectly.

The set contains a larger 20 x 20 plate block, but I want to use those for the top, so I am going to assemble a board using the smaller pieces. 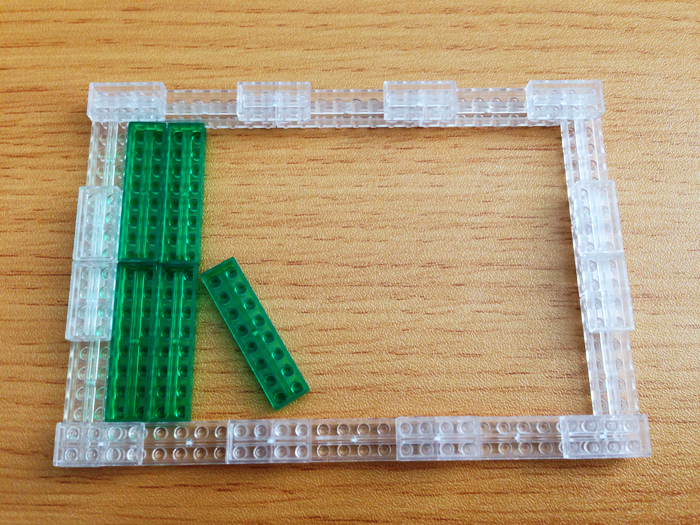 In this manner, it is easier to make the outer frame first, then you can turn it over line it up and set it.
I am using a color that I won’t use on the main section since it would make the Raspberry Pi inside difficult to see.

After you place it inside, line up the blocks on the seam.
Turning it over made this construction much easier! Let’s now reinforce it. 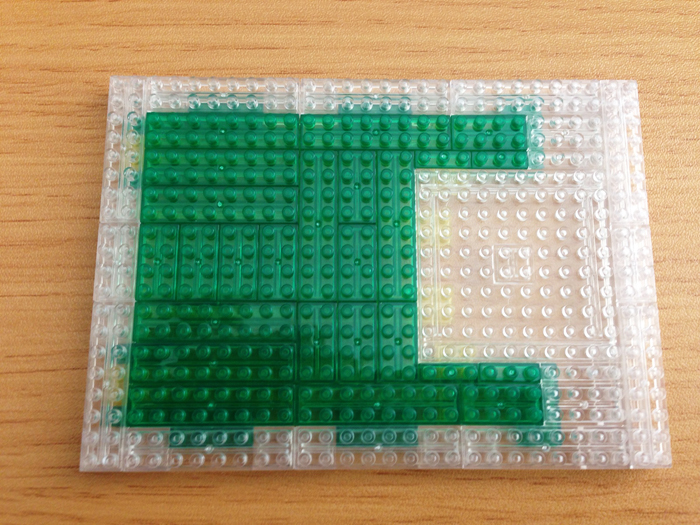 The foundation is finished! Because I want to use red and white as the main colors since they go well with the Raspberry Pi, I used transparent blocks for the outer frame.
The inside is green since it matches the color of the circuit board.
The right side has the SD card slot, so naturally I will use the same color as the frame to finish it.

Next make the walls. It is easy but I made a sketch. 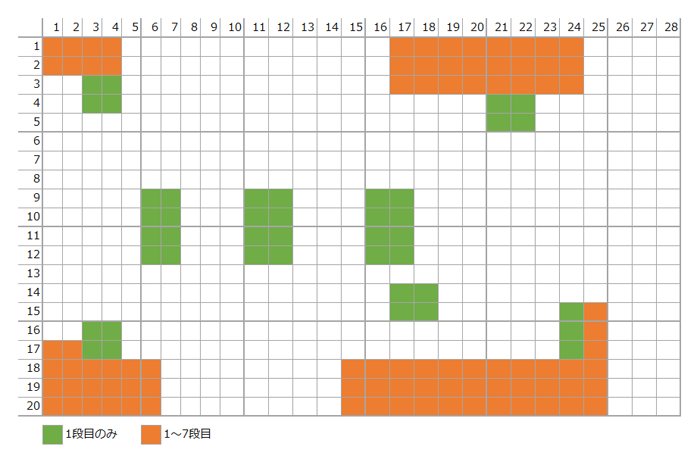 I’m using the green blocks to lay out the first level of blocks. This is for the height of the SD card area, and so we need suspend it. On the bottom,  I set the block in a way to avoid having an uneven surface to keep the Raspberry Pi stable.

I’m using the orange blocks to continue building up the wall to 7-8 levels. 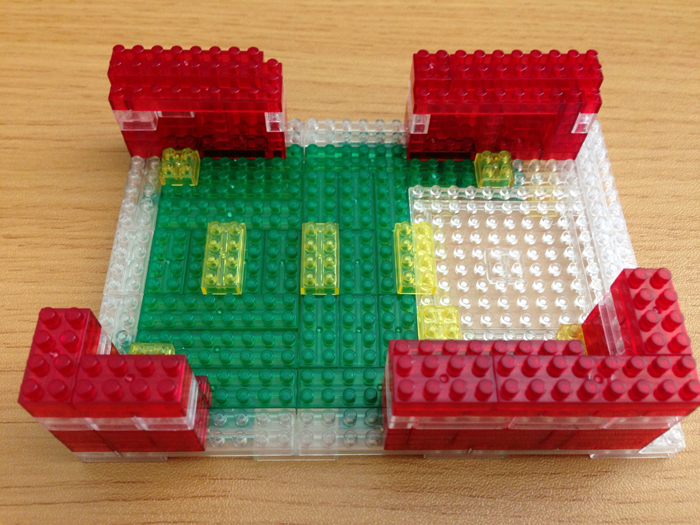 When you finish the wall, it should look like this. If there are areas you can’t see from the outside, it is okay to remove some blocks here and there. If you want to strengthen it more, it is better to offset the blocks like bricks.

Finally, for the top, I will use the largest plate we put aside. 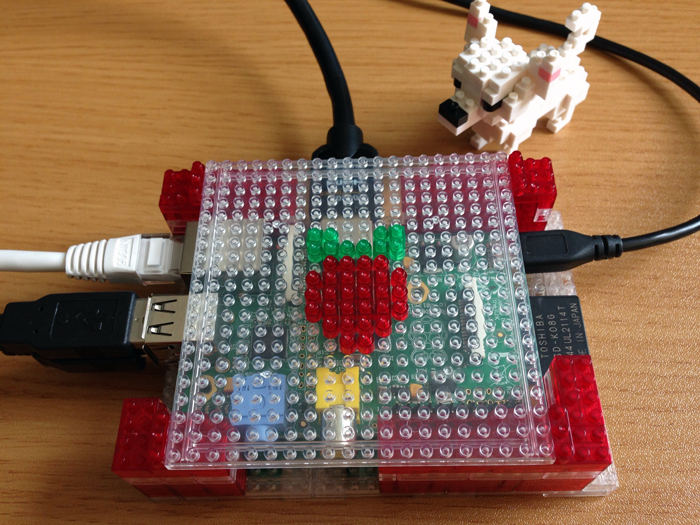 It’s done! (the Raspberry is already inside!)

Since I chose the clear color blocks, I can see the circuit board even after it’s assembled.

Now that the appearance looks like better, let’s dive inside!

I installed the OS “NOOBS” ver. 1.3.9, downloaded from the Raspberry Pi website. After the installation, there was 13 icons appearing on the desktop.

This is my first time using Linux, so I’m unfamiliar with the icons or the name of these software name.
I am going to give a brief introduction as I went through and decided which ones I may be able to use or not use.

After trying these softwares, and I have an idea on what they can do! I will start by introducing these easy softwares for beginner.
Instead of “software”, it actually looks more like “function” shortcuts.
If you understand these, you will be able to operate the Raspberry Pi more smoothly.

Huh? Shutdown? Can you?

I thought you could only shutdown from the command line, but there is a convenient function!
I wish I had known that sooner! However, there is no start menu so how I could know about it….

There is just a dialog box that appears, very simple to do.
If you choose “Yes”, not only will it log you out but it will close down Linux at the same time.
Once the “ACT” “LED” on the body turns off you can unplug the power cord. Really convenient! It is a feature I wish I would have noticed sooner.

It is the function that I wish I would have known from the start!

When I first turned it on, I remember the black background on the on screen!
It is like a command line screen.
After starting the OS you can use it! It is like the Windows MS-DOS function.

If you have this, you will be able to take a screen shot like this, so you should be able to do it if you follow the article as written.

The browser.
It is displayed in the menu bar. You can also launch it from the globe icon. The shortcut is convenient, but why is the icon illustration different……?

Because of the performance of the SD card, the operation speed is quite slow. 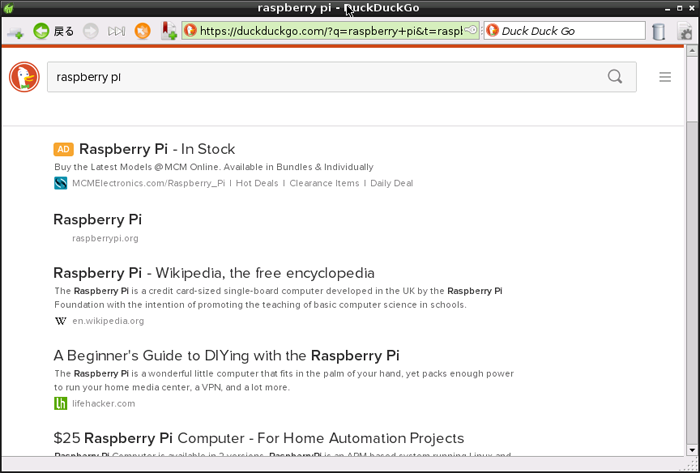 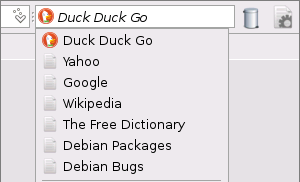 The duck character is really cute!

Intermediate Level! Even If You Don’t Know How Exactly It Works, You Can Still Use These Softwares

After some trial and error, I could fumble my way through! This is what is meant by “intermediate”. These softwares are perfect for a beginner like me to start playing with Raspberry Pi.

This is a tool to use when you want to use the WiFi instead if the LAN cable.

Scratch is a visual programming language that can be accessed as a free desktop and online multimedia authoring tool that can be used by students, scholars, teachers, and parents to easily create games and provide a stepping stone to the more advanced world of computer programming.

On the official website, you can try it out on the browser.

By building events and command in blocks, you can control the flow of process. It is like a pseudo language program. It is not necessary to start writing code immediately, so don’t worry! It will be really fun! I wish I had this kind of tool when I was a student. 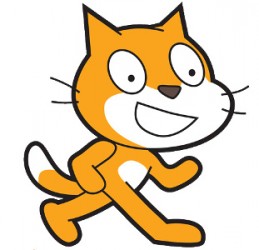 This character appears in the section called “Cat1”, so the character is a cat. (It is not a fox!)

This is a collection of mini games like in Windows accessories.
As the name says, they are made with Python.
There are games like Othello and Tetris, 14 simple games in all. 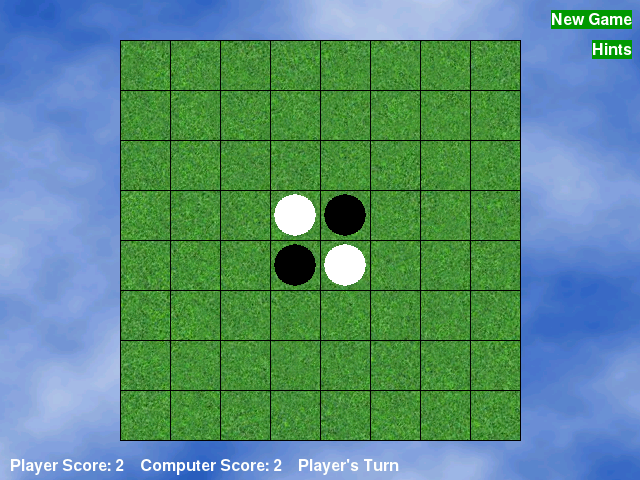 Take a look whenever you have some free time. They are very simple with no animation. You might feel nostalgic.

Advanced Level! You Need Some Knowledge to Use these Softwares

Even if you research about it you may not be able to understand them… This is what I meant by “advanced”.
The Raspberry Pi is geared towards learning, however you do need some time to master it, even if you have some specialized knowledge.

Whether we can use them or not, let’s have a look and study them.

Mathematica is a symbolic mathematical computation program, sometimes called a computer algebra program, used in many scientific, engineering, mathematical and computing fields. The Wolfram Language is the programming language used in Mathematica. 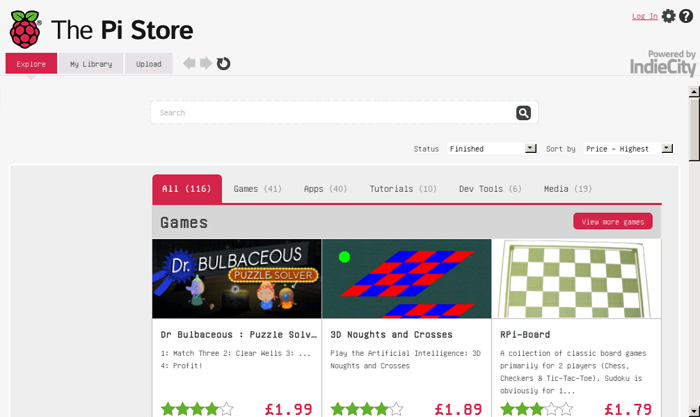 You can download free and paid applications. Over 100 games are available in the game section. To download applications, you have to sign up first. There is a “follow” button, so it looks like there is a simple SNS type function. On the “Developers” page you can see information about the developers. There are applications for all type of use are available (personal, professional, education, etc.).

These icons that looks similar. Their name doesn’t differ much too.

When you start it, the numbers displayed look a little different but basically the same.
It has the same icon as “Python Games”. It seems to be a Python related software.

IDLE (Integrated DeveLopment Environment) is an integrated development environment for Python, which has been bundled with the default implementation.

It though it was something like an editor or command line, or even a software to do debugging. The difference between IDLE and IDLE 3 is about the Python version. I think I won’t be able to master IDLE for a long time.

There are many tutorials available in PDF format.

This is a help document from Debian (Raspbian is a Linux OS based on Debian). You can also see it offline 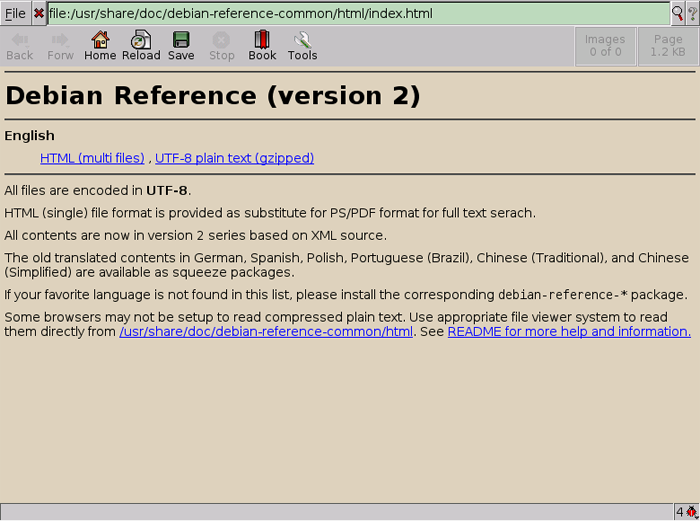 Personally, “Shutdown” and “LX Terminal” were the best discoveries! If I continue like this, there won’t be any icons I never clicked on. If you open the start menu, there are many other tools available. I will check them out when I have some time.

I was thinking about what we could do next with the Raspberry Pi when my boss told me: “Make a NAS for the company”

So, in the next article, we will try to make a NAS with Raspberry Pi. (By the way, what is a NAS?)