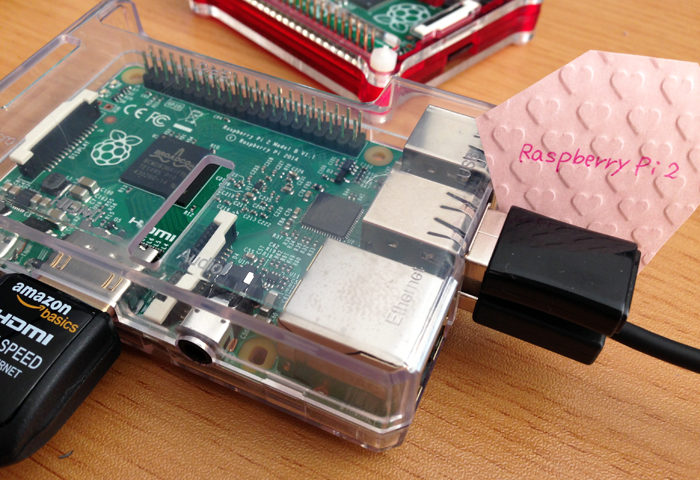 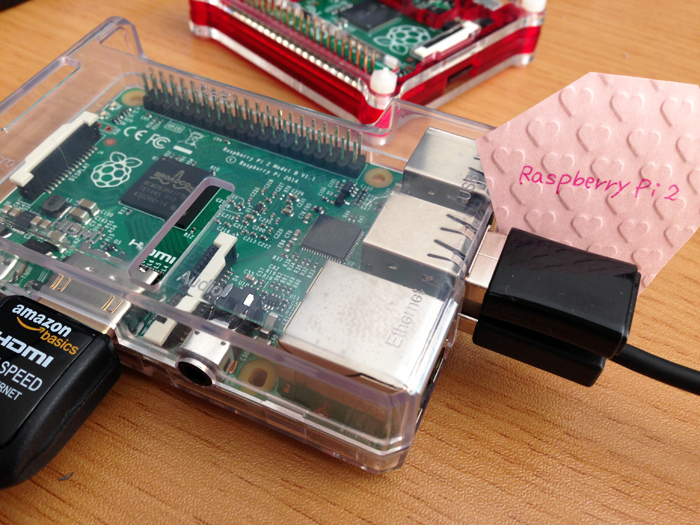 I just got the new Raspberry Pi 2 Model B!
As I want to use it right away, today we will be playing with it! (I originally plan to use the A+ you can see in the background of the picture, but let’s save it for next time!)

I want to use this new Raspberry Pi 2 and compare it to the previous models. Also, to make sure that the sweat and tears from the past projects don’t go to waste, we will learn how to back them up to an SD card! But wait. It doesn’t work! What? Error! As always, I’ll be bringing you a geeky girl’s struggle to figure things out!

First, let’s look at the exterior of the Raspberry Pi 2! 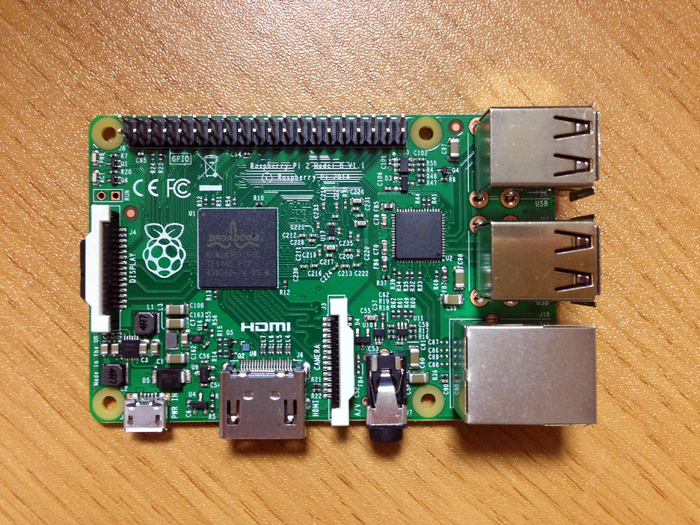 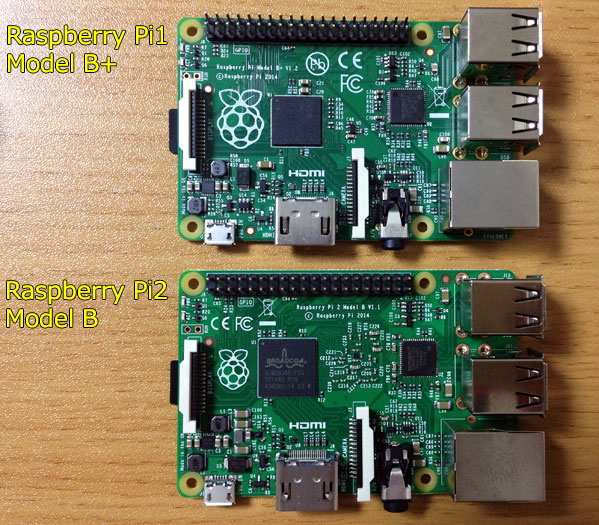 Here it is a comparison with the Model B+. Even though some parts seem to have moved, the form factor is the same! From the outside, the USB and HDMI ports look unchanged. 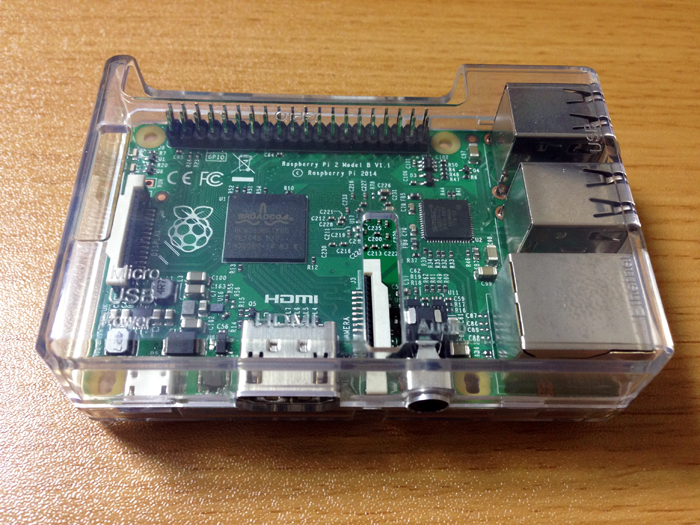 The Raspberry Pi 2 fits perfectly in a Raspberry Pi Model B+ case. Until now, a different case was needed for each Raspberry Pi version. It’s great to have this compatibility.

Inside of the Raspberry Pi 2!

If the outside is the same, does it mean that the specs have improved?! Let’s check out the information on the official site!

・6x more processing power
・2x more memory
・Completely compatible with Raspberry Pi 1
These are the main features of the Raspberry Pi 2.
It has the same functions as the Model B+, but with much higher specs!
The original Raspberry Pi is now listed as Raspberry Pi 1, so let’s try and remember the new name. The following comparison appears on the shopping page of the official site. 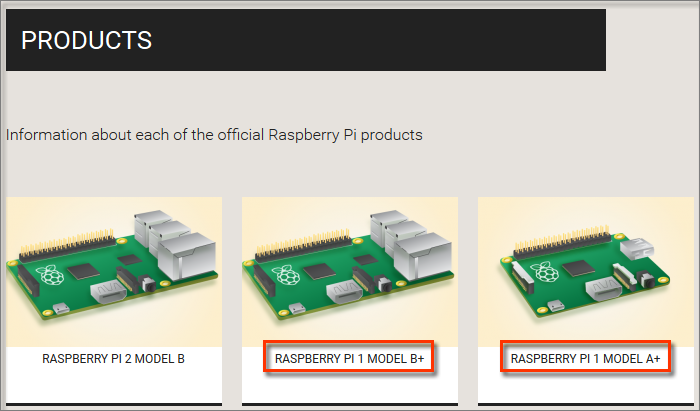 Raspberry Pi Features and Specifications – Wikipedia
Wikipedia has a comparison chart. When comparing it to the historical Model B series, it looks like this:

When you line them up like this, you can really see how they have evolved!
Perhaps, the most interesting difference concerns the OS. Indeed, the Raspberry Pi 2 also supports Windows 10!

Microsoft To Offer Windows 10 Free To Raspberry Pi Devs
Microsoft has announced it will be offering the latest version of its desktop OS, Windows 10, free to users of the Raspberry Pi microcomputer later this year — as it seeks to keep pace with, and remain relevant to, developments powering the Internet of Things (IoT).

The details haven’t been announced yet, but it seems it will be provided within 2015 through the Windows Developer Program for IoT.
With the introduction of Windows, users that lack experience with the Linux environment can now try out the Raspberry Pi. There’s a big chance we’ll be seeing a huge increase in users!

Since they claimed a complete compatibility, I took the microSD card I used with the previous Model B+ devices and inserted it as is. But it didn’t work.

The “PWR” LED stays lit, but nothing happened afterwards.
Thinking coolly, the cause was simple. An old, pre-Raspberry Pi 2 version of Raspbian was installed on the SD card.
Despite the “complete compatibility,” it seems we need to use a NOOBS version that is compatible with Raspberry Pi 2. I thought we could use the NAS and the radio we’ve been using up until now as is, it won’t be possible. 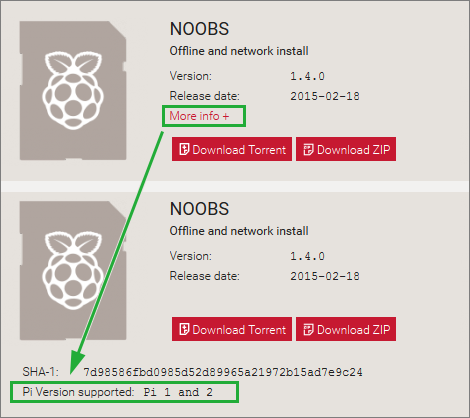 Now that we’ve figured out the reason, it’s time to give it another go with a new Raspbian that supports Raspberry Pi 2!
Let’s make a backup of the currently installed SD card.

This time we will introduce a method for saving an image file using a Windows environment software called Win32DiskIMager.
Once the SD card is ready to be read, activate “Win32DiskImager.exe”

In the Image File text box, choose the output path and the file name.
When backing up, either prepare an empty image file at your destination and select it or directly input the file name into the text box. If you select an existing file, it will be overwritten, so be careful. 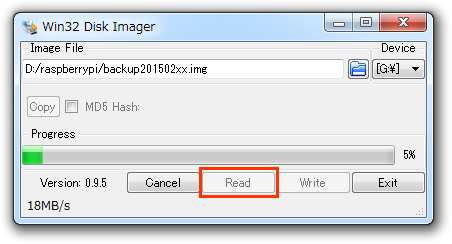 Creating a backup file requires reading the SD card. So, click the “Read” button. Processing takes some time. It will create an image file at your chosen destination with about the same size as the content of your SD card. Your backup is complete! When you want to recover this SD card backup, select the image file and click the “Write” button.

Install a new NOOBS that supports Raspberry Pi 2 and restart!
Also, as an experiment in compatibility, I tried installing something using the Raspberry Pi 1 Model B+ before then transferring the SD card into the Raspberry Pi 2. For more info about this installation, check out the previous article Raspberry Pi – Basic Completion (Don’t forget to format your SD card!)

Starting Up the Raspberry Pi 2!

After completing the preparation for your SD card, it’s time to insert it into your Raspberry Pi 2 and start it up! 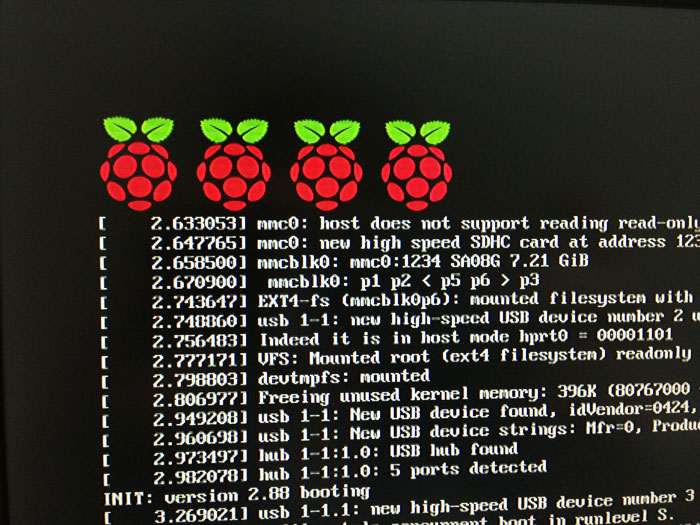 Wow! There are 4 raspberries on the startup screen!
Is this because the CPU has changed to a quad-core? Booting with exactly the same SD card on the Raspberry Pi 1 Model B+ only show a single raspberry. It seems this is only viewable on the Raspberry Pi 2. 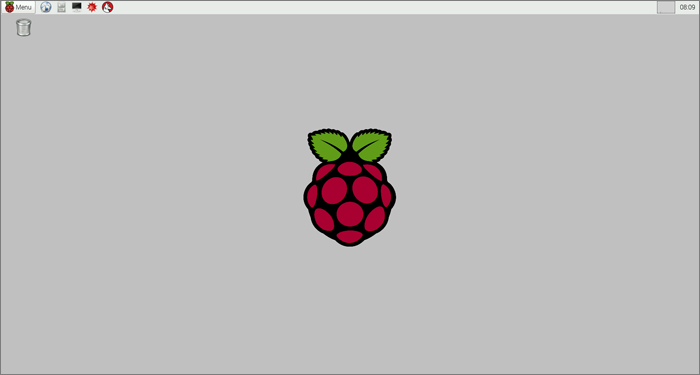 This is the desktop screen.
The desktop got a makeover with the new Raspbian! The new default desktop is clutter-free with only a single bin icon. The menu bar has also been moved to the top.

The menu button is cuter now too, with a new picture of a raspberry! The 5 icons displayed next to the menu button are, from the left to the right: Epiphany web browser, File Manager, LX Terminal, Mathematica and Wolfram. The whole display has become bigger than before, so everything is easier to understand! By the way, we previously introduced the desktop in our article Raspberry Pi – Basic Completion.

When starting up the desktop, sometimes you will get the following error:
“GDBus.Error:org.freedesktop.PolicyKit1.Error.Failed: Cannot determine user of subject”
(Picture from startup of NOOBS ver.1.3.12 released on 2015-02-02)
For detailed information, see this page:

Comparing the Ease of Use

The picture shows the CPU usage of the Raspberry Pi 1 and the Raspberry Pi 2 (the graph is shown next to the clock on the right of the menu bar). The comparison was made when both devices were connected to WiFi and accessing Google.com.
On the Raspberry Pi 1, the CPU maxed out the second the browser was opened, and even the mouse move slowed. It also took a lot of time for the page to be displayed. This was always this slow, so I was used to it, but after trying the Raspberry Pi 2. Wow! Although it took a bit of time, I was able to access the page without feeling any burden! Even when running multiple programs on the Raspberry Pi 2, it worked smoothly. I was able to really feel the difference  of processing power!

Those of you who own both the Raspberry Pi 1 and 2, try it out!

My first impression about the Raspberry Pi 2:
The processing power as well as the download, installation and other operations all felt like they leveled up. It is quite satisfying to know that it is compatible with Windows 10 too!
It is compatible with previous devices, so if you complete installations that take time on the faster Raspberry Pi 2 and then transfer the SD card to the Raspberry Pi 1, you’ll be able enjoy tinkering with electronics without letting your old devices go to waste!

I talked briefly about that at the beginning of this article, but I will introduced you the Raspberry Pi 1 Model A+ the next time. 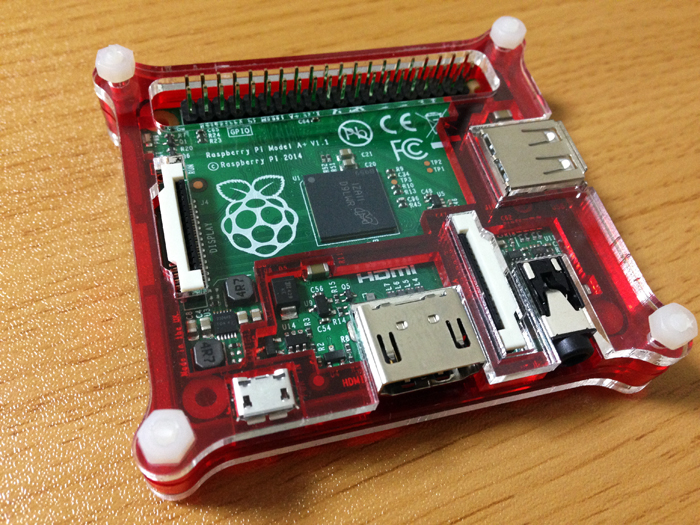 Small and cute! The raspberry colored acrylic case is cute too right?

I did some research, and the standout feature of the A+ is its low-energy setting! So, we will use this feature to try and tackle a completely wireless device that uses a portable battery. We will also use remote access to control faraway Raspberry Pies!