In 2017, University of Houston researchers announced a breakthrough in robot prosthetics. A new robot hand can detect temperature differences. Further, the hand can translate computer data into American Sign Language gestures. What does this advance tell us about the future of robot prosthetics? 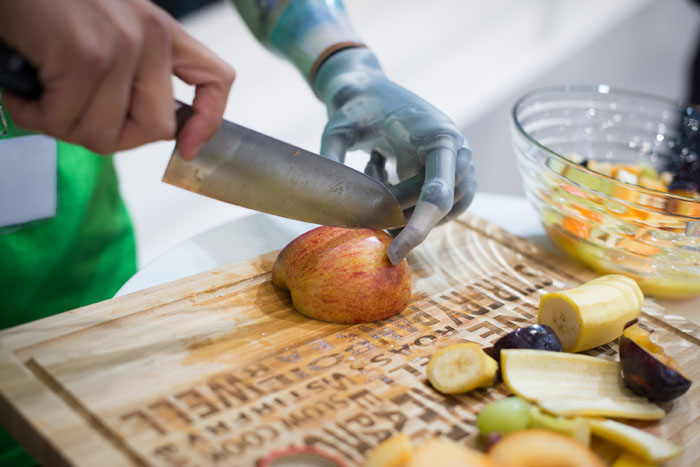 Losing a limb is a devastating blow, but more so in the not-so-recent past. That’s why soldiers desperate to escape military duty in World War I sometimes shot themselves in the foot or hand. It was a way to get out of combat. Unfortunately, those injuries meant long-term suffering, limitations, and a lower quality of life. Before robotics entered the picture, the last significant advance in foot prosthetics came in 1971 with the creation of the Jaipur Foot.

Things have changed recently with the creation of robotic prosthetic devices. Take a closer look at the available options.

What Can a Robot Prosthetic Arm Do Today?

The days of making do with a simple hook are over. In 2016, Johnny Matheny, a cancer survivor in Florida, became one of the first people to receive a robotic arm. Created by John Hopkins Applied Physics Lab (APL), this robotic device is controlled directly by the brain. To achieve this result, the lab received over $100 million in funding from the U.S. Defense Department. The military is highly motivated to develop new prosthetics since soldiers and veterans need assistance.

According to Matheny, the robot prosthetic arm developed by APL offered immediate benefits compared to traditional options. He was immediately impressed with the device:

“Before, the only way I could put the prosthetic on was by this harness with suction and straps; but now, with osseointegration, the implant does away with all that. It’s all natural now. Nothing is holding me down. Before, I had limited range; I couldn’t reach over my head and behind my back. Now, boom, that limitation is gone.” – APL’s Modular Prosthetic Limb Reaches New Levels of Operability

Note: Osseointegration is a medical procedure to connect bone to artificial limbs. It’s a critical step in making a robotic limb operate safely.

Thus, it’s much more responsive than non-robotic prosthetics devices are. As with any breakthrough, some significant drawbacks exist. The device must be kept dry, and it cannot be used for driving. The device also required at least two surgical procedures, so there’s a significant time commitment, as well as risk involved in adopting the device. What about helping people become more mobile with robotic legs?

Coming to a Track Near You: Robot Prosthetic Leg Hardware

Andy Grant, who suffered injuries from an IED explosion in Afghanistan, made headlines in 2017 by using blade-style prosthetic legs to compete in 10K races. There’s demand for prosthetic legs capable of withstanding the pressure of athletic competition. Robotic legs can do more than help you compete in a foot race, though.

Consider the X3 robotic leg developed by Ottobock. Unlike simple blades, this robotic leg is designed to be controlled by a user’s smartphone. With waterproof capabilities, this device is much more versatile for daily life. The device’s battery has an expected life of five days. By integrating with smartphones, the device will have a shorter learning curve than other devices have. However, there are security concerns with smartphone integration. Suppose your robotic leg was hacked or compromised by malware. That could lead to terrible injuries and damage.

Adjusting to an artificial limb has historically been a difficult process. However, artificial intelligence (AI) software is being developed to make the process easier. By using reinforcement learning methods, one AI research project delivered a major advance for robotic knees, “enabling the prosthetic wearers to walk smoothly on level ground within 10 minutes.” Published in IEEE Transactions on Cybernetics in 2019, this research could mean that future robotic prosthetics become productive and effective much faster.

However, there are significant safety and basic science issues to investigate before this type of AI is widely implemented.

Tip: Suppose you don’t want to rely upon a smartphone to control your robotic leg. MIT researchers have developed a robot with voice command capabilities. By dynamically adjusting to human voice input, the Baxter Research Robot has completed some physical tasks. Thus, robotic limbs may require less programming to become effective in the future.

The Growth of Robot Prosthetics Will Be Fueled by These Hardware Trends: Heat and Pressure Sensors

Robotic limbs need to be responsive and durable, and they need to mimic the sensory capabilities of natural limbs. On the sensory front, low-cost sensors for temperature and pressure connected with the Internet of Things (IoT) will give humans better experiences with robotic limbs. The second trend relates to the flexibility of robotic limbs that require electrical power. Specifically, advances in battery technology will be necessary to make robot prosthetics more convenient and safe. If humans with robot prosthetics are anxious about collapsing to the ground suddenly when their legs run out of power, people may avoid using these devices.

Pressure sensors are one of the most important hardware components inside robotic limbs. Just think about the last time you rubbed a sore muscle with your hand. With the right level of pressure, you experience some relief. If a robotic limb applies too much pressure, you could easily end up with an injury. A 2017 research paper proposed using A101 FlexiForce sensors to address the challenge of sensing and applying pressure. Able to operate in temperatures of -40°C to 60°C (-40°F to 140°F), this sensor costs less than $100 at the time of this writing. The small size and low cost of the sensor means it’s easy to install in robotics devices, including prosthetics.

Temperature sensors are another critical hardware device inside robotic limbs. Without the ability to sense temperature changes, a robotic hand could become damaged if you were to touch a stove or other hot
surface. Touch-transmitting robotic hands use heat and pressure sensors to give human users feedback. As demonstrated by BioTec-equipped Dexterous Hands in 2019, these robot hands give the human user a close-to-lifelike experience. However, transmitting heat information poses risks. Suppose too much heat is accidentally transmitted and the human user is injured. In the future, robot prosthetics with heat and pressure sensors will need to be carefully calibrated to balance safety and useful feedback information.