Eat this! Robotics and AI in your Stomach 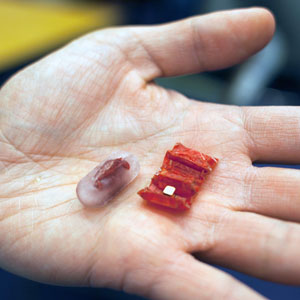 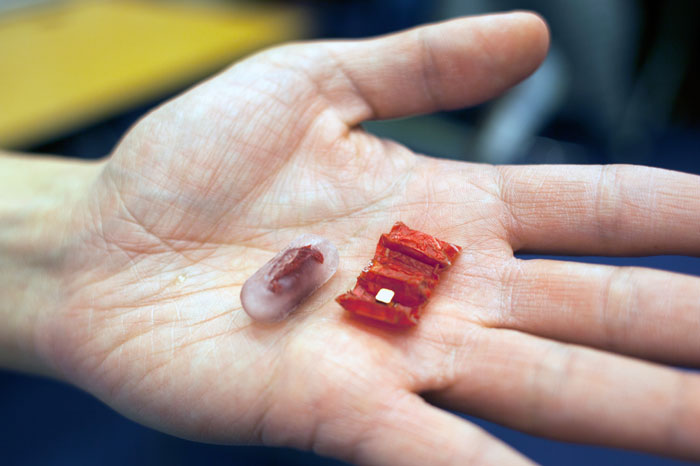 In a collaboration between researchers at MIT, the University of Sheffield, and the Tokyo Institute of Technology, innovations in healthcare robotics have resulted in an ingestible origami robot that can be remotely controlled as it passes through a patient’s digestive tract.

“The biggest challenge is how to build a capable medical robot that is clinically safe. Addressing this challenge requires finding biocompatible materials, safe means of transportation in the body, a way to reconfigure the robot from pill shape to unfolded shape, and precise multi-mode control for the location and function of the robot,” said Dr. Daniela Rus, MIT professor in Computer Science and Artificial Intelligence Laboratory (CSAIL).

Overview of the Ingestible Origami Robot

To start, the robot is folded into an origami shape and then encased in a 27 mm capsule of ice for the patient to swallow. It travels through the esophagus and stomach in the compact pill shape, then the surrounding ice melts.

When used on a person, the bot can be geolocated using a combination of ultrasound, X-ray, and an array of hall effect sensors.

Here the robot unfolds itself. It then uses multiple methods of locomotion, including friction-based propulsion that results from the origami shape, water-based propulsion from stomach fluids, and trajectory control from the use of magnetic fields. 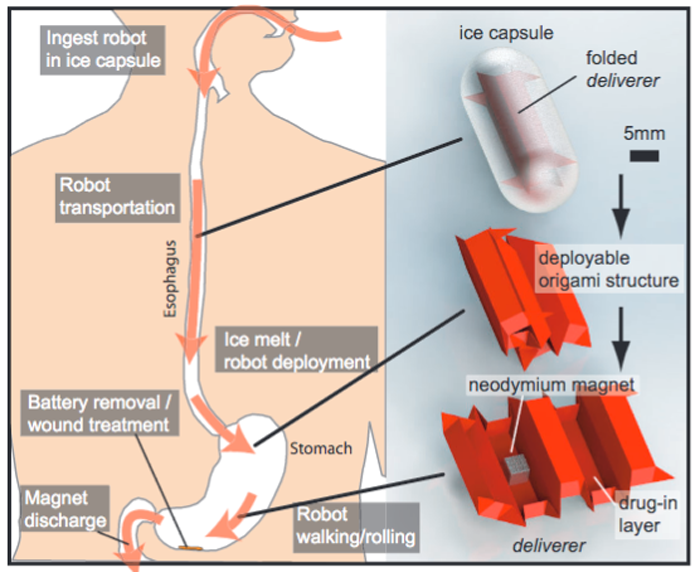 The first type of locomotion uses magnetics. In one of the accordion folds of the bot is an embedded neodymium magnet that’s 3.2 mm long. This responds to external magnetic fields outside of the body and allows the trajectory of the robot to be manipulated.

Using rotational magnetic forces controlled via remote control joysticks, a quick rotation will make the robot spin in place, but a slower rotation causes the robot to pivot around one of its fixed feet.

The second type of locomotion is what the researchers call a “‘stick-slip” motion. This is made possible because of the shape and structure of the origami folds. Its edges stick to a surface through friction, but when its body flexes, it slips free because of a change in its weight distribution.

For example, “the magnetic field is applied at 5 Hz in the direction along which the deliverer is actuated (the positive x direction in the figure) oscillating through four angles (Ψ, Ψ/2, −Ψ/2 and −Ψ;Ψ = 1.1 rad is the angle from the horizontal plane). When such an alternating field is applied, the deliverer can ‘walk forward’ due to the combination of thrust, asymmetric frictional force induced by the shape between front and rear, and asymmetric mass balance of the body.”

The researchers estimate that 80% of the robot’s motion uses this stick-slip propulsion, and the remaining 20% uses water propulsion from the fluids in the stomach. “In this regard, we actively introduced and applied the concept and characteristics of the fin to the body design, which you can see in the relatively flat design,” says Shuhei Miyashita, who was a part of the research team. 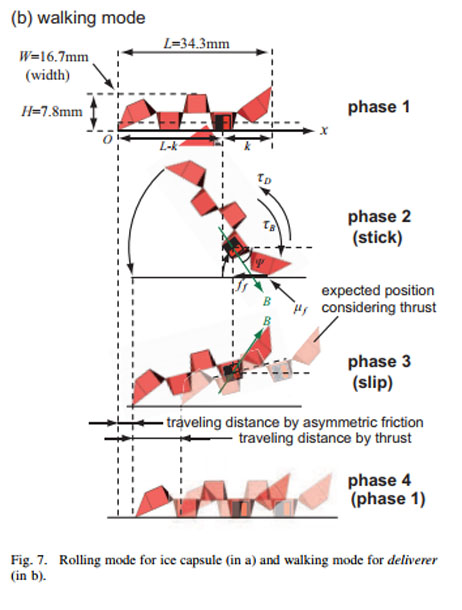 ”Stick-slip” locomotion used while inside stomach

Materials and Mechanics of the Ingestible Origami Robot

In this device, function is intrinsically linked to its form and materiality.

Not only did the materials need to be biocompatible, but there needed to be enough structural integrity and stiffness. It had to accommodate the origami folds while also being rigid enough to create the friction needed for the stick-slip movement.

They found success using a type of dried pig intestine that is used in sausage casings. Researcher Shuguang Li said, “We spent a lot of time at Asian markets and the Chinatown market looking for materials.” The overall structure was composed of a layer of casing on the top and bottom as the two exterior surfaces surrounding a layer of Biolefin, a biodegradable shrink wrap which shrinks when heated.

The folding pattern is then created through a series of shallow slits that only penetrate the exterior layers. For example, when only making a slit through the top of the three sandwiched layers, the middle layer will contract, and the form will fold downwards towards the bottom layer.

While compacting the bot into a tiny shape to be swallowed was important, so too was the way that the origami bot unfolds. The bot needed to be designed in such a way that it could self-deploy using the forces inside the stomach that are acting on the robot.

To achieve the right structure and shape of the folded bot, the team used mostly trial and error to arrive at the rectangular shape with accordion folds along the short axis, plus pinched corners to give the bot added traction.

Citing the 3,500 people annually who swallow a battery, the team focused on the potential use of this device to extract a swallowed battery that is lodged in digestive tract. To remove a battery that has become lodged in the body’s organs, the team used the bot’s embedded magnet to separate the battery from the stomach wall and carry the object out of the system.

The team cites future potential applications for this technology to be the ability to patch a wound, deliver medicine to a targeted location, or remove other types of foreign objects from the body.

Initial prototypes were developed in 2016, and as of 2017, the robot is still not human-ready. Rus says, “Typically, getting in vivo experiments done and getting approvals takes three years. Going from animals to humans might be another three years. There could be a minimum of six years to have a successful treatment for humans.”

Yet this ingestible origami robot is not this only iteration of healthcare robots using origami. The team at Harvard Medical is researching similar methods, but coming up with a completely different origami bot for healthcare.

In the video below we see how the MIT team’s previous version of their origami robot set the stage for the latest model.

Are Healthcare Robotics a Good Idea?

The concept of miniature robotics for healthcare is not new. In fact, a sci-film from the 1960s, Fantastic Voyage, foreshadowed the potential of nanorobotics during a miniaturized adventure inside the body’s blood vessels to remove a clot. Yet for many robotic healthcare devices like implantable pacemakers and defibrillators, there is the very real concern of a hacker gaining access to your healthcare device.

Additionally, these devices are not yet Internet-enabled, currently relying on relatively lo-fi mechanisms of materiality, friction, magnetics, and effective delivery systems. Its simplicity is what makes this a strong prototype.

“This concept is both highly creative and highly practical, and it addresses a clinical need in an elegant way,” says Bradley Nelson, a professor of robotics at the Swiss Federal Institute of Technology Zurich. “It is one of the most convincing applications of origami robots that I have seen.”

Subscribe to Device Plus to learn about other innovations.