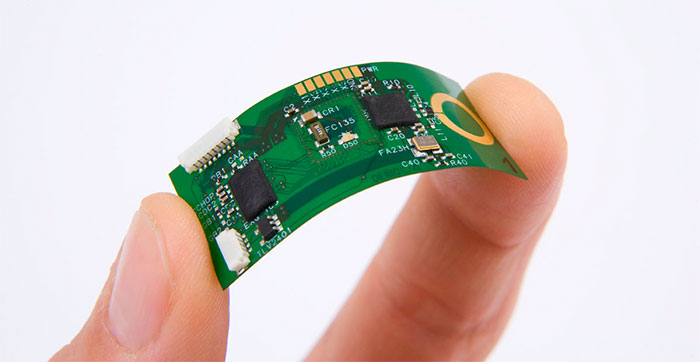 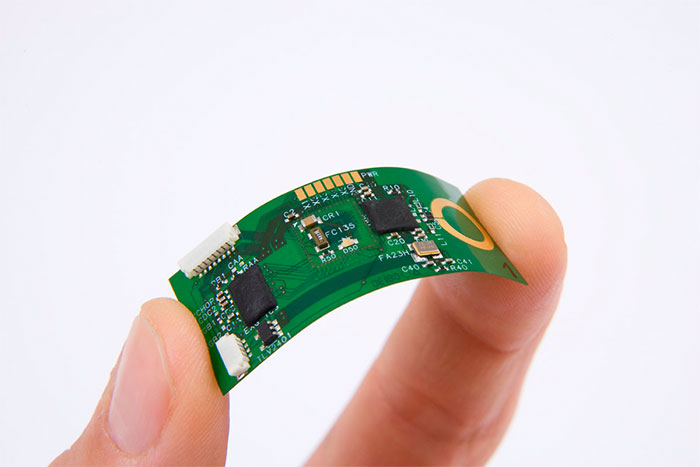 While traditional electronic circuit design based on a rigid PCB board substrate has been the reliable foundation of the digital technology age, there is a limit to what form factors and functionality this design can support. With the trend toward smaller devices and the rapid growth of wearable technology and IoT, innovation is stepping beyond modification of customary practices (which are reaching their limits) towards further embracing an alternative design concept: flexible electronics.

Also referred to as flex circuits, this next-wave technology involves printing/mounting electronic components onto dielectric flexible substrates, resulting in devices that can be bent, rolled, folded, and stretched while maintaining functional integrity. Such designs lend themselves to a wide array of possible applications, including sensors, medical devices, smart textiles, displays, flexible batteries, photovoltaics, lighting, automotive, and defense applications. This leap in circuit design is expected to spawn newly created applications that were not conceivable within the limitations of traditional architecture. 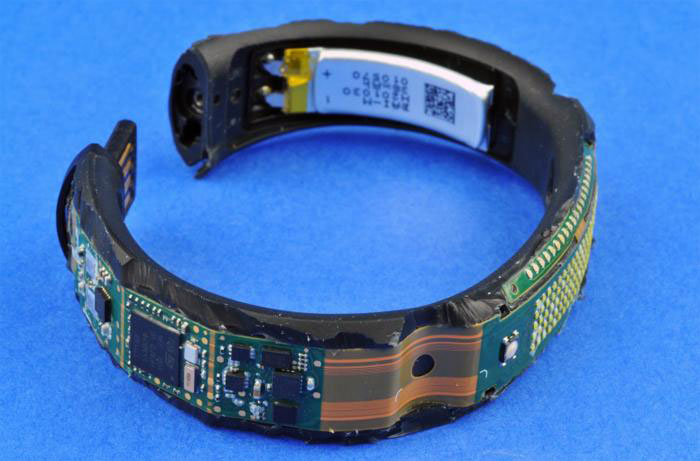 The Nike+ FuelBand SE is a low-energy Bluetooth 4.0-enabled fitness device designed to be worn around the user’s wrist to measure daily physical activity as well as sleep monitoring. Activity is measured via a 3-axis MEMS accelerometer and stored until the device is synced with an iPhone, iPad, or PC via the band’s USB connector or Bluetooth. 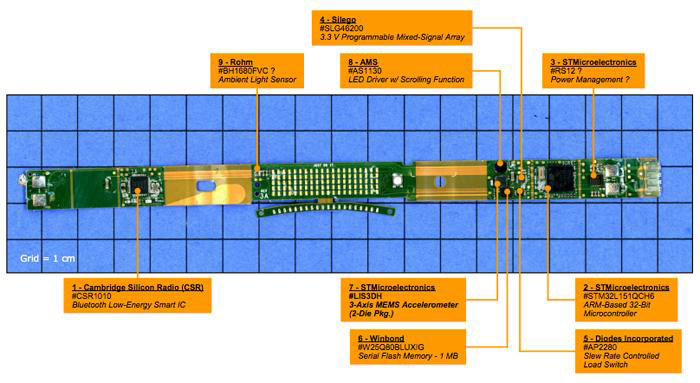 In addition, these designs allow for the combining of multiple functionalities, thus having the ability to replace multiple rigid boards or connectors in standard designs. All things considered, it is understandable why the flex circuit market is predicted to nearly triple in the next 10 years, resulting in an over $69 billion industry by 2026 according to IDTechEx research.

Flex circuit design improvements and advancements are focused on the most defining feature: the flexible substrate and thin layers of conductive circuit traces to which other electrical components can be connected, molded, or printed. The capabilities of these substrates directly contribute to the most significant qualities of a circuit, including how flexible it will be, its heat stability, cost, ease of production, and performance. Polyimide and polyester films are some of the most widely used substrates for flex circuit manufacturing.

As an alternative to polyimide substrates, AI Technology has developed proprietary organic copper-clad laminate materials which are solderable and can be used at temperatures as high as 300°C. Their COUPLER™ flex circuit material has a low dielectric constant and high moisture resistance, effectively eliminating moisture-induced degradation problems commonly seen with polyimide substrates. AI Technology lists cost savings of this material at 50% of traditional polyimide flexible circuit material. 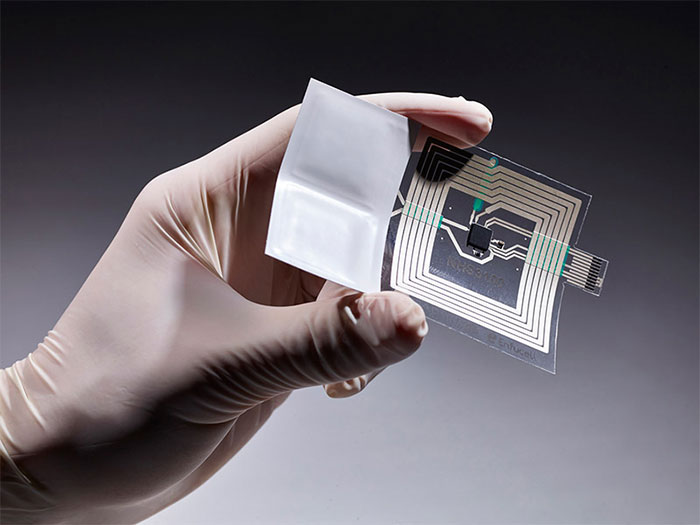 Both public and private interests are intensely focusing on the future of flexible hybrid electronics (FHE). NextFlex, a consortium of companies, academic institutions, nonprofits and governments, officially opened on August 31 as the only Flexible Hybrid Electronics (FHE) Manufacturing Innovation Institute in the US. Located in the heart of Silicon Valley in San Jose, NextFlex received a $75 million DOD investment in 2015 to advance FHE technologies. Four inaugural recipients of contract funding made possible in part by the DOD grant were announced last month:

The dressing would monitor oxygen levels of a wound bed and would also deliver topical oxygen to the wound in response to low levels. Proper oxygen levels are crucial for wound healing and would prevent further deterioration of wounds and associated complications. The structure of the platform (from previous research; Mostafalu et al., 2014) is is also suitable for other low-cost wearable and disposable biomedical diagnostic applications.

The sensor will relay the data via BLE. The coupling of sensor technology with a mouth-guard is ideal because they are required equipment for military training exercises and can be easily replaceable at low cost. Monitoring fatigue work to help keep military personnel safe and healthy through training and active performance, and more chemical indicators could be incorporated in the future. 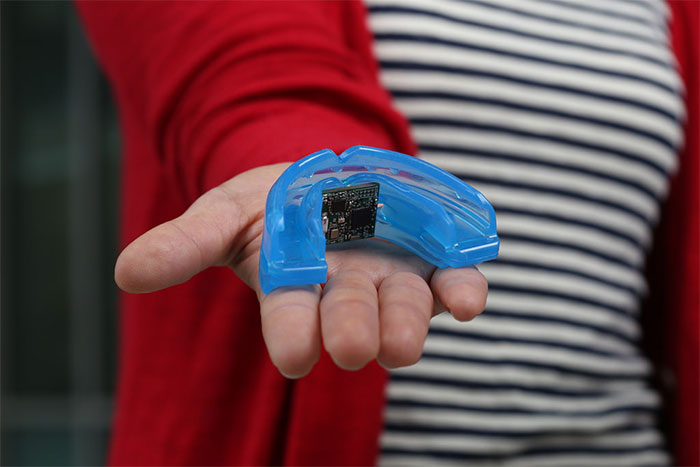 Figure 5: A mouth guard that can monitor health markers (e.g. lactate, cortisol and uric acid in saliva) and transmit the information wirelessly / ©UCSD

In order for FHE to be successful, the flex technology has to be produced in a reliable, high-performing, and cost effective way. This team will be looking for more viable production methods that can be easily transferable for the lab to the manufacturing floor. Successful outcomes will help to increase comfort and performance for wearable monitoring systems and benefit the FHE industry as a whole.

The project will concentrate on the cornerstone for advancing digital health and IoT through accelerating the fabrication of wireless pervasive integrated sensor systems. The envisioned future is one where both our internal and external environments are continuously monitored and data feedback on conditions are used to heighten personal health, performance, and productivity. Wireless integrated sensor systems are the foundation for ubiquitous monitoring and BU and GE will be aiming to advance manufacturing technologies for these systems.

From personal health monitoring to Defense applications, FHE are receiving the financial support and research focus from across private and public entities to quickly usher in advancements in the technology.