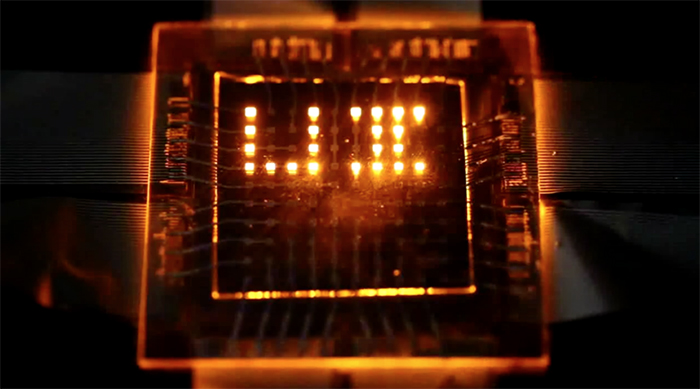 Dual-functioning nanorod LEDs, which can simultaneously emit and detect light, could bring us one step closer to the next-generation of smart device displays. Cell phones and other devices with light-responsive LED displays will soon enable new modes of user interfaces, such as touchless gesture-based controls, automatic light adjustment and self-charging capabilities using ambient lighting.

A multinational team of researchers from the University of Illinois at Urbana-Champaign and Dow Electronic Materials has introduced their tiny heterostructured nanorods and luminescent quantum dots that can serve as both photovoltaic sensors and light-emitting diodes, depending on bias current direction. This quantum dot-based device can harvest and generate light and process information. The nanorod LEDs have multiple semiconductors that allow the device to perform both functions by quickly switching back and forth between emitting and detecting.

The double-heterojunction nanorod (DHNR) light-responsive LEDs are about 50 nanometers long and 5 nanometers in diameter, which is more than one thousand times thinner than a strand of hair. These nanorods have quantum dots directly in contact with two different semiconductor materials within the nanorod. And, they are made of three types of semiconductor material. One type emits and absorbs visible light. The other two control how charge flows through the first material. Together, these allow the LEDs to emit, sense, and respond to light. Each LED has to be switched on and off for emitting and detecting, and this process happens at such a high frequency that the display appears to stay on continuously to the human eye. 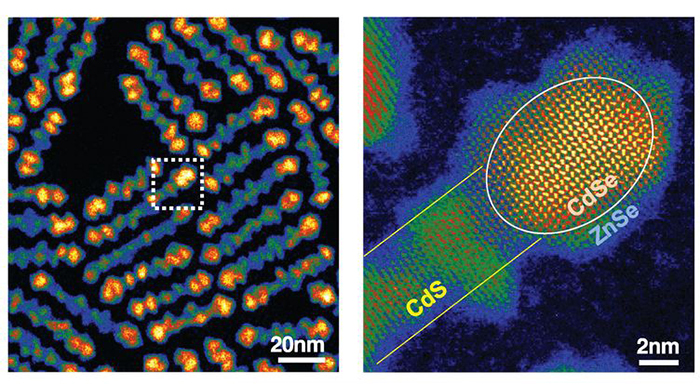 Figure 1. Low- and high-magnification scanning transmission electron microscopy images of DHNRs and magnified image of the region within the white dotted box on the left. / ©Oh et al., 2017

The structural details of DHNRs entail CdS, CdSe, and ZnSe. Tiny semiconductor nanorods made of cadmium sulfide (CdS) are capped with luminescent cadmium selenide (CdSe) quantum dots (QDs) – a smaller band gap semiconductor. CdSe ends are then encapsulated in a larger band gap semiconductor, zinc selenide (ZnSe). Taking advantage of its structure, DHNRs can act as both charge separation and recombination centers. DHNRs with the ability to fine-tune both charge separation and recombination can also enable photocurrent generation and electroluminescence in a single device, simultaneously. 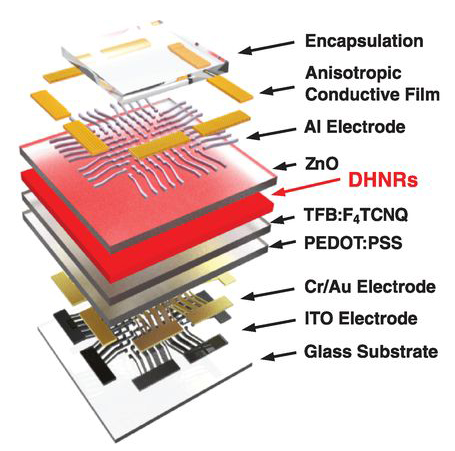 Once DHNRs are stacked between electrodes, they can be arranged into an array of pixels that can be switched between light-emitting and light-detecting modes by changing from forward to reverse voltage bias. These solution-processed DHNR-LEDs feature low turn-on voltage (around 1.7 V), narrow bandwidth (<30 nm), and high maximum brightness of >80,000 cd/m2. They also exhibit low bias and high efficiencies at display-relevant brightness with an external quantum efficiency of 8.0% at 1000 cd/m2 under 2.5 V bias.

DHNR-LEDs can also operate as useful photodetectors at zero or under reverse bias. A simple example is demonstrated in which a 10×10 pixel array is shot by a laser pointer. A circuit board is programmed to supply a forward bias to any pixel that detects incident light at zero bias. The signal from the laser pointer is then spatially resolved by the LED array, leading to a “writing” action on the display. This simple control circuit can translate any detected signal into a desired response, such as brightness adjustments. Light detection performed at pixel-level or a shadow made by an approaching finger or a stylus could be detected and interpreted as new touchless commands.

One of these functions is photodetection that occurs via the photovoltaic effect. Photocurrent generated under air mass (AM) 1.5 illumination leads to power conversion efficiency of 0.2C%, which is typical among devices tested, with the highest being 0.3%. Four devices that operate in the photovoltaic mode charge the supercapacitor, and then it can be used to power the same devices in the LED mode. The photo-detection in the DHNR light-responsive LEDs are similar to a photovoltaic effect, allowing the displays to harvest or scavenge energy from surrounding light sources without the need for integrating separate solar cells, making them even more efficient.

The dual operation modes of the LEDs open doors to many more possibilities. Direct imaging or scanning at screen level could be possible thanks to the individual pixel sensing capability. The dual mode can also turn closely coupled LED displays into massively parallel data communication, enabling direct display-to-display data communication. Even though device-to-device technologies like Bluetooth would be faster in speed, two LED arrays facing each other could communicate with as many bits as there are pixels in the screen.

The sensory ability of DHNR-LEDs enables the design of new touchless user interfaces, as well as direct imaging with display screens. The researchers added that the long-term stability under the dual-mode ac operation appeared promising, “with no measurable decrease in brightness and photoresponse over 65 hours of continuous operation at an initial luminance of 1067 cd/m2 and 50% duty cycle.” With its faster response time than typical display requirements, the operation mode can not only enhance established capabilities but also completely redefine what a display is and how it functions and multitasks. Such displays that can function as a light-activated electronic whiteboard or a light stylus-responsive tablet would mean new modes of communication, drawing, and artistic creativity.