Lasers, Radar and Jamming: The Hardware We Need to Improve Drone Airport Safety After Gatwick 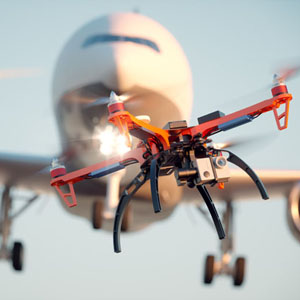 Drone airport safety burst into the news in December 2018 when drone activity at London’s Gatwick airport caused a security incident. As a result, three flights were disrupted and landed over an hour later than their scheduled arrival time. An earlier drone incident caused the airport to close for 33 hours and disrupted over 140,000 passengers. 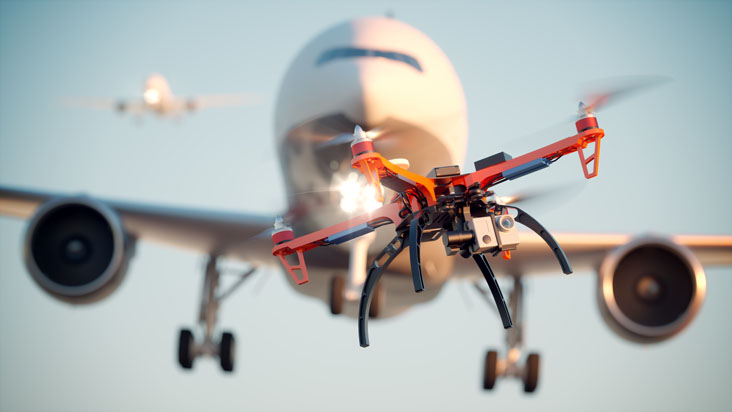 How Do They Stop Drone Interference at Gatwick Airport?

There are ways to interfere with drone flight, and the British authorities are using them. According to the BBC, “Military anti-drone equipment, which can detect the flying machines and disable them by jamming radio signals, remained at the airport until March.” Specialized detection means are necessary because conventional airport radar isn’t designed to detect small aircraft. Through jamming signals, police and security authorities can disrupt drone control and force them to land.

There’s an entire industry of anti-drone technology in development. Some of these anti-drone devices use electronic means to disrupt drones, such as radar jamming. Others use physical attacks such as nets to capture these drones. Now, what can we say about the hardware used at Gatwick airport?

What Drone Prevention Hardware Did They Use?

Early reports on the hardware used by the British police and armed forces at Gatwick suggest several anti-drone devices may have been used. Drone Dome, an anti-drone system, has been purchased by the British Army and may be used by the authorities at Gatwick. Drone jamming devices such as the E1000MP Portable Drone Jammer are likely to be used as well. Finally, security experts suggest that military-grade radar was likely used to detect the drones. Let’s look closer at each of these devices.

The Drone Dome system has been ordered by the British Army and may be used to respond to future drone attacks. In essence, this device uses radar and laser technology to detect and interfere with drones. With a detection range of 2.1 to 6.2 miles, this portable system offers considerable coverage on a 360-degree basis. Once the drone is detected, the Drone Dome can send an overwhelming volume of radio signals to the drone, which disrupts normal functions. However, that’s not the only way drones can be stopped. Another version of the Drone Dome has “a high-powered laser which can make a ‘hard-kill’ on drones by effectively melting them” according to a UAS Vision report.

In addition to the system above, the British also have the E1000MP Portable Drone Jammer to address drone airport safety. The jammer is a lightweight device (22.5 lbs) that can be transported by an individual. This highly portable device has an operational range of nearly two-thirds of a mile. Running on battery power, the E1000MP can operate for four hours and takes four hours to recharge fully. For added security, this anti-drone device can be mounted on vehicles. When connected to a vehicle, the E1000MP can draw power from the vehicle’s power, which means it can operate longer than four hours. In the future, we may see these devices mounted on most security and police vehicles stationed at airports and other sensitive facilities.

The E1000MP works by sending signals on popular drone control radio frequencies (e.g., GNSS L1, 2.4GHz and 5.8GHz) to disrupt control, navigation, and video signals. However, simple disruption of a drone may be dangerous, as an uncontrolled drone might injure someone. To address this risk, the E1000MP can send a “return to home” command to the drone. This command directs the drone to return to its original controller. In addition to a safe landing, this command helps authorities identify the operator of a drone.

What Other Hardware Can You Use to Improve Drone Airport Safety?

In addition to the drone airport safety measures outlined above, there are other options on the market. Boeing has created an anti-drone truck with a so-called “death ray” capability. First announced in 2015, Boeing’s anti-drone laser has a 10-kilowatt laser to attack drones. In contrast to most commercial drones, which struggle to operate in adverse weather conditions, Boeing’s laser is quite versatile. According to the Daily Mail, “Boeing has even proved it can battle the weather – by tracking and firing through fog, wind, and rain in its latest test.” Formally known as the High Energy Laser Mobile Demonstrator (HEL MD), this laser can attack drones up to two-thirds of a mile away. To guide the laser, there’s a radar system mounted on the truck to detect the drones.

The HEL MD is a military-grade approach to drone airport safety. As one of the more expensive and complex options, it’s unlikely to become widely used. However, we may see it used in high-risk environments such as military airports and major public events. After all, using lasers to disrupt drones may cause drone debris to fall to the ground. Having such options available for drone airport safety serves as the last line of defense to keep flights operating safely throughout the world.

Two Predictions for the Future of Drone Airport Safety

Drone airport safety concerns are likely to increase as drones continue to become more popular. From a legal perspective, anti-drone regulations and controls are likely to become more stringent. For example, the UK has increased its anti-drone exclusion zone to 3.1 miles around airports in 2019, a significant increase compared to the two-thirds of a mile exclusion zone previously in place. Technologically, military and law enforcement organizations are likely to continue to demand anti-drone hardware. These hardware developments will include more detection equipment as well as attack devices such as lasers. To avoid problems, drone hobbyists will need to study local regulations in their area to avoid trouble.