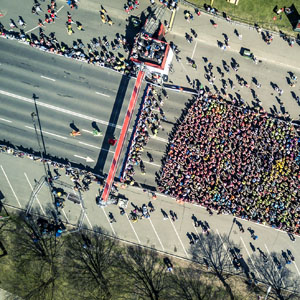 Training new pilots with all the skills needed to manage aircraft is a massive undertaking. Excellent eyesight, calmness under pressure, and thousands of hours of training are required. At the same time, airlines are hungry for more pilots. According to the New York Times: “635,000 commercial pilots will be needed by 2037.” Suppose drone machine learning could ease the burden.

When you’re on a plane, it’s difficult to understand what’s happening at ground level. That challenge only becomes more severe if there are large crowds of people. Following the Boston Marathon bombing of 2013, researchers were inspired to work on the crowd problem. Simply put, how can you analyze a large crowd of people quickly to determine who has a high likelihood of violence? It’s not practical or affordable to put thousands of police at every event. Thus, drone machine learning is worth pursuing. 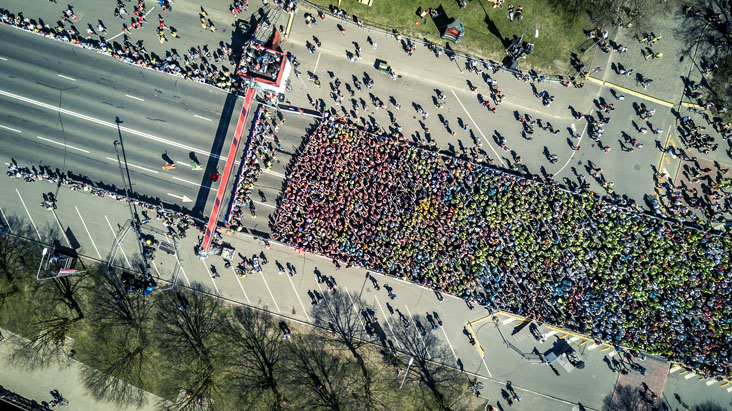 “Training deep learning algorithms to recognize violent actions by detecting various combinations of body and limb poses in video footage. To create a training dataset, researchers enlisted 25 interns to gather in an open area and mimic violent actions in five categories such as punching, kicking, strangling, stabbing and shooting while being filmed by a Parrot AR.Drone from various heights ranging from 2 meters to 8 meters.”

How does the Parrot AR.Drone work in practice? While this particular model is no longer available for sale, the hardware in it says a lot about the components that’ll be used in other drone machine learning experiments.

Designed as a classic quadcopter, the Parrot AR.Drone is capable of a flying range of 164 feet. That range limitation is due to a few reasons. From the operator’s perspective, it’s helpful to keep the drone in visible range. Second, the drone needs to stay in the range of the smartphone, which is used to transmit codes and receive data from the device.

For drone machine learning to work, a large amount of raw data is necessary. With the Parrot AR.Drone, most of that data is obtained through a 720p 30fps HD camera. At 30 frames per second, that gives you plenty of capacity to capture JPEG images of crowds. With a wide-angle lens, the drone’s camera is capable of taking in a large amount of information.

In addition to the primary camera hardware, a secondary camera assists with navigation. Specifically, this camera points toward the ground. The 60fps camera has a single function: to measure the drone’s ground speed. This is helpful information if you’re operating in adverse conditions such as high winds.

Resource: You can also use drone cameras to create 3D maps.

Without a consistent orientation to take photos, drone machine learning cannot operate successfully. That’s where gyroscope hardware comes into play. The Parrot AR.Drone uses a 3-axle gyroscope with an accuracy of 2,000°/second. To a degree, information from gyroscopes aids in drone flight stability. Thus, your drone can continue to operate and observe crowds even if there’s rain, wind, or other disruptions.

Imagine your drone machine learning project involves observing a crowd of 1,000 angry people. Given that drones typically have a maximum flight time of 30 minutes, there’s not much room for error. Specifically, you can’t afford to have your drone to become lost or for the drone pilot to become disoriented. Fortunately, the magnetometer device inside the drone assists with navigation. If you need to fly the drone north to observe an area, how do you know if you’re heading north? The magnetometer provides that information.

So far, we’ve looked at ways drone machine learning could be used in cooperation with a human operator. That’s not the only way this technological trend can play out. Drone machine learning can also be applied to one of the most difficult challenges of flight: safe landings. Whether you have a civilian or military drone, it’s critical to land the device safely. Otherwise, the drone may crash, and you’ll have to replace it entirely.

Researchers at Caltech are using drone machine learning to help with safe landings. In fact, these researchers have given drones an even greater challenge: landing under adverse conditions while minimizing power consumption at the same time. Science Daily reported the project as follows:

“At Caltech, artificial intelligence experts have teamed up with control experts to develop a system that uses a deep neural network to help autonomous drones “learn” how to land more safely and quickly, while gobbling up less power.”

By optimizing power usage, drones will be able to fly further on the same battery charge. Further, these drones will have the ability to perform new types of missions currently considered impossible. For example, a large drone could land in the middle of a traffic accident to carry away an injured person for medical care. In that situation, stability during

What may happen in the Future of Drones with Machine Learning

If you are interested in drones and their capability, check out this article too; Robots Are Leaving the Factory: Find Out How Cleaning Robots Work