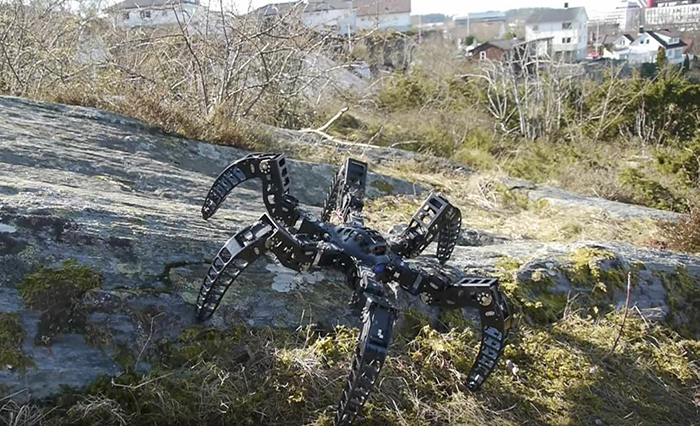 MX-Phoenix is ahexapod robot designed by Norwegian engineer and robotics hobbyist Kåre Halvorsen, who goes by the nickname Zenta. As you’ll see in the video below, this formidable, tarantula-like hexapod can handle a wide variety of terrain. The MX-Phoenix can travel on flat surfaces, ascend and descend stairs, as well as non-uniform, rocky terrain. The controller demo shows the MX-Phoenix’s quick responsiveness and incredibly smooth gait.

Zenta has designed a number of hexapods and other varieties of robots over the years, including his award-winning MorpHex robots. He states his goals for this particular project:

“A more dynamic gait engine and terrain adaptation. I also want a hexapod robot with a relative small body and large leg section, I’m also trying to keep the total weight as low as possible.”

The robot’s tibia and body components were designed using Fusion 360 and printed on a Wanhao Duplicator i3. He then strengthened the printed ABS parts using an acetone vapor treatment. Weighing 4.76 kg (10.5 lb), the Mx-Phoenix utilizes a total of 18 Dynamixel servos from Robotis. The C++ code, which contains Zenta’s custom gait-algorithm for hexapod robots (called DynaZgait), is being run on a Teensy 3.6 MCU. To learn more about Zenta’s projects, visit zentasrobots.com.