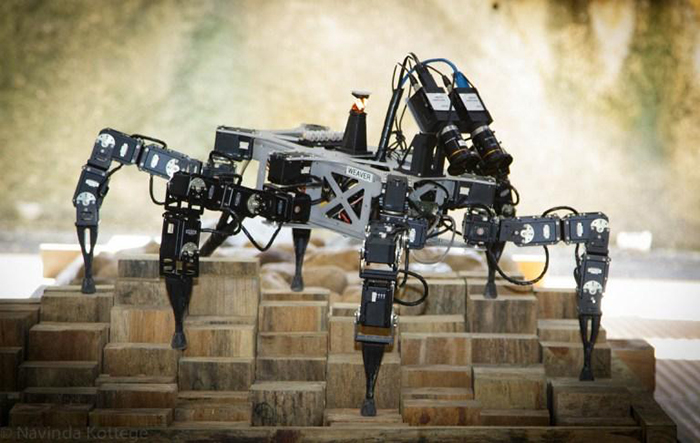 Weaver is the ultimate all-terrain hexapod. Developed by the Robotics and Autonomous Systems Group at the Commonwealth Scientific and Industrial Research Organisation

(CSIRO) in Australia, this robot features five joints on each leg, creating 30 degrees of freedom. This amount of actuation allows the hexapod to have higher levels of proprioception than would be possible with a more simplistic design. Proprioception is the sense of the relative position of one’s own parts of the body and strength of effort being employed in movement. Exteroceptive sensing allows Weaver to self-stabilize in real-time without the need for a prior profile of the terrain.

As shown in the video, Weaver has the ability to adapt to and traverse different terrain styles seamlessly. Weaver is also able to maintain static stability on inclines of up to 50°.

Weaver can also be equipped with stereo vision which is used to determine the most appropriate gait for the terrain that it is encountering. You can see a demonstration of the stereo vision that guides the gait parameter selection in the video below.

This technology and research could have many applications ranging from environmental research, exploratory missions, search and rescue and much more.

Create your own HEXAPOD!

Hexapod robots are one of the coolest robots to build! Inspired to build your own hexapod but do not know where to start? Check out our 3D-printed Arduino Hexapod tutorials: