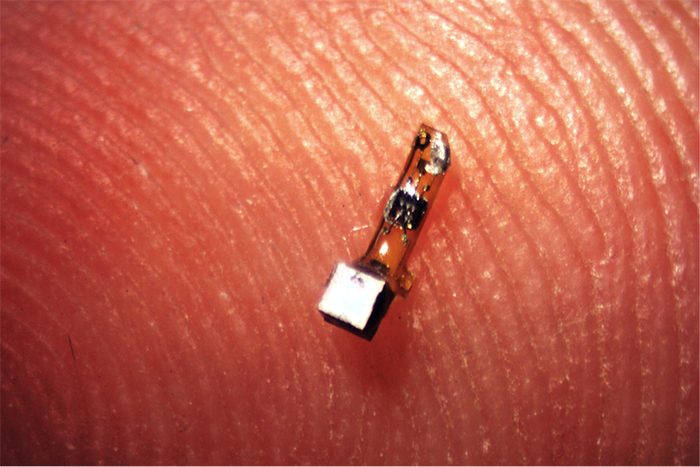 Researchers from SWARM Lab at UC Berkeley have just introduced dust-sized ultrasonic neural sensors. Measuring only 0.8 x 3 x 1 mm in size, this tiny neural implant enables electrophysiological recordings of muscles, nerves, and organs in the peripheral nervous system in real time. Unlike current, conventional implantable electrodes which connect to wires, these sensors are wireless and batteryless. The sensors are also ultrasound-based. Ultrasound is very effective at delivering power and transmitting data to millimeter scale or smaller devices.

What is Neural Dust?

According to the researchers, the term describes a “free-floating, independent [mm-scale] sensor nodes that detect and report local extracellular electrophysiological data via ultrasonic backscattering”.

This new technology paves the road to electroceuticals, defined as bioelectronics-based therapies. They are wireless sensors that detect and process electromyogram (EMG) signals from muscle activity as well as electroneurogram (ENG) signals from neural activity. Based on the recorded data, they are able to stimulate our body’s immune system and ameliorate inflammation, thus preventing progression of diseases, such as epilepsy. 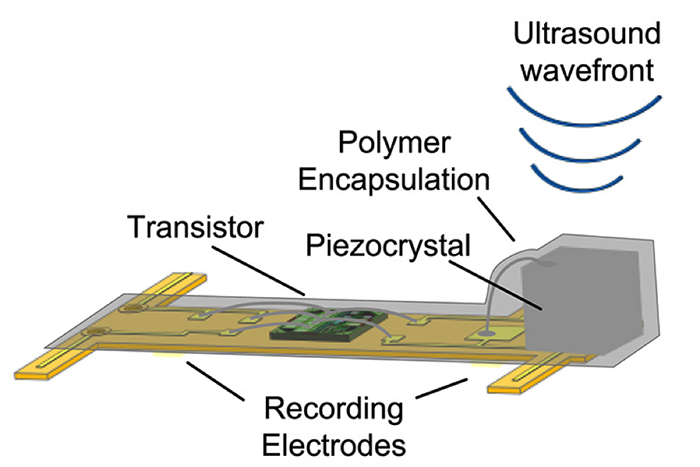 The neural dust system was assembled on a flexible PCB and is composed of three main parts: a piezoelectric crystal, a single custom transistor, and a pair of electrodes that measure nerve signals. The system also includes an external ultrasonic transceiver board which powers and communicates with a sensor by alternating between emitting a series of six 540 nanosecond pulses (ultrasonic energy) and listening for reflected pulses. Piezoelectric vibrations caused by ultrasonic energy can convert the mechanical power of externally generated ultrasound waves into electrical power. This power is then supplied to the transistor.

The assembly process of the sensor is shown in Figure 2. A neural dust is integrated on a 50mm thick polyimide flexible PCB (yellow). The piezoelectric crystal (gray; 0.75 x 0.75 x 0.75 mm) and the custom transistor (neon green; 0.5 x 0.45 mm) are wire-bonded to the top side of the board. The sensor was then encapsulated with medical grade, UV-curable conductive silver epoxy. Electrical connections between the components were made using aluminum wire bonds and conductive gold traces. 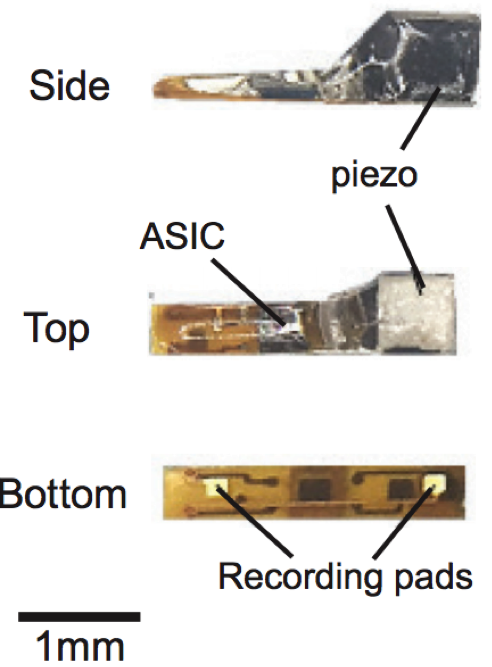 Gold recording pads on the bottom of the board is exposed and they can directly make contact on the muscle or nerve to record electrophysiological signals.

So, how do these neural sensors monitors the signals?

First, the neural dust “mote” is implanted in gastrocnemius muscle for EMG recordings and in contact with the epineurium (outermost layer) of the sciatic nerve for ENG recordings. Pulses of ultrasonic energy from an external transducer are sent to a piezoelectric crystal which powers a transistor. This process doesn’t require a battery. Action potential (voltage) from the nerve or muscle picked up by the two recording electrodes is then sent to the transistor. Some of the ultrasonic energy emitted causes the piezoelectric crystal to vibrate and the vibration, in turn, creates a “backscatter” ultrasound signal that encodes the electrophysiological voltage across the two electrodes. This electrophysiological signal can be decoded to obtain EMG or ENG data. 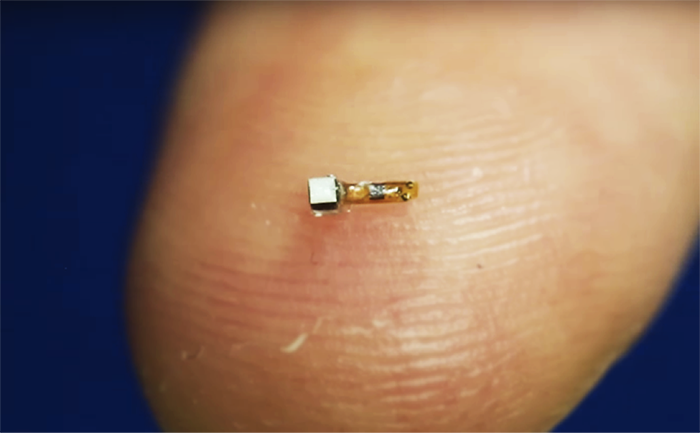 Current research involved the peripheral nervous system using an external ultrasonic transducer to power and communicate with a neural dust. Researchers explain that the neural dust can also be implanted in the central nervous system and brain. This technology can further contribute to improving functional control of neural prosthetics. The future research involves miniaturization of the device to even a submillimeter scale. In addition, researchers are currently building the sensors using biocompatible thin films, which would be resistant to degradation and stay preserved in the body for 10 years or more.