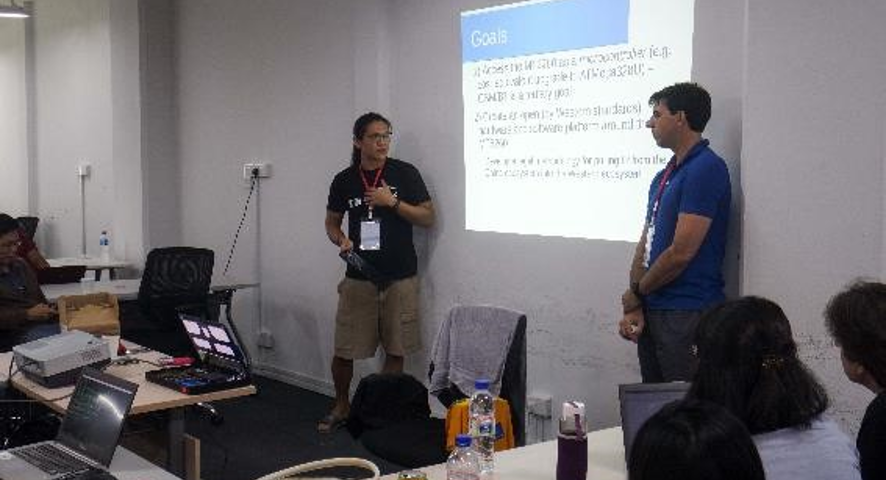 The manufacturing industry of the Pearl River Delta centered in Shenzhen, called “the World’s Factory,” has built an unprecedented, open ecosystem that has arisen spontaneously.
There is a significant difference between developing software, such as Internet services, and developing hardware in terms of accessible resources, which makes it difficult for individuals and small businesses to develop their own hardware. Strangely, small enterprises with several or dozens of employees can develop and manufacture complex hardware like mobile phones around Shenzhen, China. The ecosystem created by the industries clustered in Shenzhen, the “World’s Factory,” and the evolution of semiconductors following Moore’s Law provide different perspectives on innovation and intellectual property protection.

When developing software (web services) on the Internet today, companies use combinations of many open-source modules and APIs. They first look for open source products, from middleware such as database software and Web servers to design templates, and develop their own parts to connect them. Web service development consists of combining components, as we can see from the fact that it is often called building.
On the other hand, when developing hardware products such as smartphones, companies decide on an SoC (System on Chip) that integrates a group of functions that are crucial for making smartphones into one chip, including communication functions/calculation/screen displays, etc., as seen in Qualcomm’s Snapdragon series. Then, they start development after signing a basic development contract with a chip developer such as MediaTek. Those basic contracts require a fairly large minimum purchase quantity. It inevitably makes the projects large.
In the Shenzhen ecosystem, this hardware manufacturing mechanism is very different. In the heyday of mobile phone development around 2010, over 2,000 small and medium-sized companies were developing Shanzhai Shouji (knockoff mobile phones), a group of cellphones with versatile functions that sometimes look ridiculous. Shanzhai, a Chinese word for local hideouts, such as Mount Liang used in the Chinese novel “Water Margin,” implies that they would do it without the control of the center. The word was adapted to mean mobile phones developed and manufactured in a guerrilla way. Since then, competition in the market has brought selection pressure and sophistication. Today, Shanzhai Shouji is no longer a hot market. However, its ecosystem is still evolving.
In Huaqiangbei, Shenzhen, you can still find a small number of Shanzhai Shoujis. 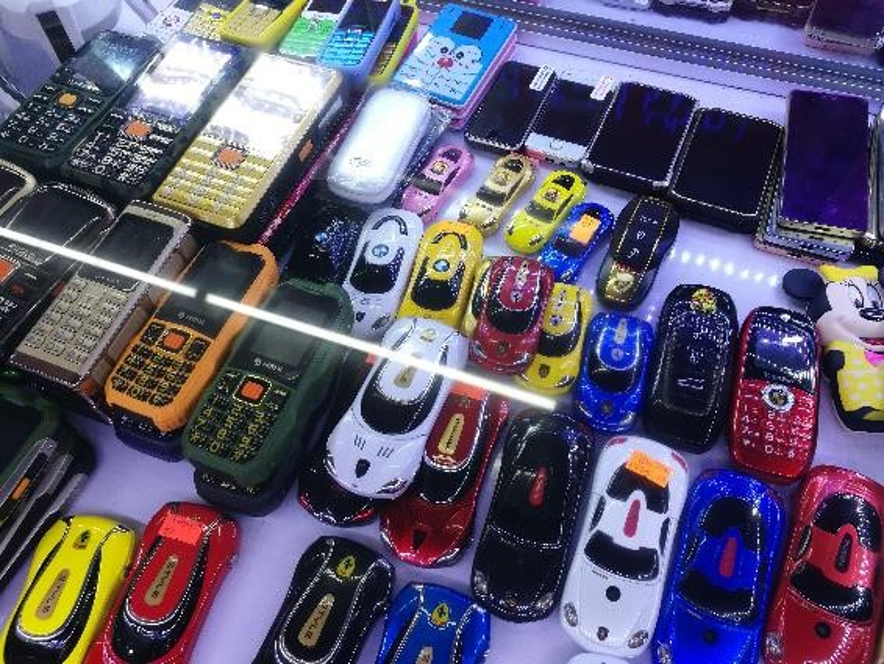 Toy-like gadgets in the picture are all mobile phones. Some are car-shaped, others are equipped with IR light to detect counterfeit bills, and others have a cigarette lighter.

For example, assume that you are in the area around Shenzhen and thinking about developing a True Wireless Bluetooth headset like Apple’s AirPods that don’t have a cable between ears. When you visit a local company that sells products that are close to your wishes, they sell pre-designed motherboards through B2B. They also attach a Bill of Materials containing information such as applicable speakers or batteries. They may even provide you with the datasheet of a chip that should normally be confidential. Those motherboards available on the market are called GongBan (Public Board). For plastic exteriors required by any hardware, there are companies that sell only injection-molded plastic casings. Those plastic products are called GongMo. “Mo” is the word for the mold required for injection molding, so “GongMo” means “Public Mold” in English. By publicly providing motherboards and plastic casings, they can develop products at high speed.
We said that you may get “products that are close to your wishes,” but that does not mean that Apple sells you their motherboard, of course. Other big brands like Huawei and Xiaomi will not do so, either. Along with ones made by such major manufacturers, however, most ICT devices on the market are designed and developed by a company called an IDH (independent design house). Shenzhen has countless IDHs. Their information, that is which IDH designs and manufactures which products, is disclosed and published in industry papers, websites, and exhibitions. 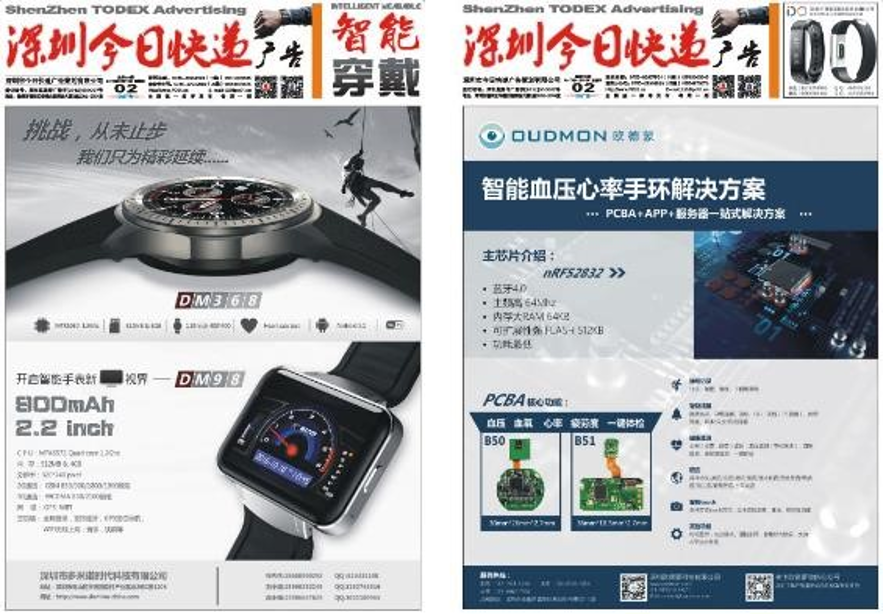 For most ICT devices, you can buy the internal motherboard and PCBA separately. You can make your own products if you ask an electronics manufacturing service (EMS) company to assemble the components and parts that you purchased.

In software development, open-source software common to many products can be used, but the resulting Web services can vary greatly. Even products in the same category as search engines and social networking services, for example, can differ greatly in appearance and usability. Improving an intermediate product that is close to your purpose, that is, standing upon the shoulders of giants, is a common reality for any design or development. Even painting and music are influenced by those who teach them and the surroundings in which they develop. In Shenzhen, thanks to the rise of the IDHs, the mechanism of “standing upon the shoulders of giants” has also been established in the development of hardware.
IDHs originated in the 1980s and 1990s as trading companies dealing with computer chips. Those companies profited from selling chips. But in China at that time, many companies were suffering from poor development capabilities. Many of them could not design motherboards by purchasing the chips themselves. Chipmakers such as Qualcomm announced a reference design when developing a new chip, showing “if used as a smartphone CPU, then the design goes like this,” etc. Trading companies mounted the reference design, with no changes, directly on boards and sold them. This enabled companies with poor design capabilities to make their own products. This is how IDHs started. Therefore, IDHs are concentrated around Shanghai, where there are many foreign chipmakers such as Intel and Qualcomm, in Xiamen and other cities in Fujian Province located on the other side of Taiwan have MediaTek, and in Shenzhen/Pearl River Delta, where many manufacturers operate.
GongBan has become famous because of Shanzhai Shoujis, the mobile phones that are famous for bizarre novelties such as “mobile phone with shaver.” In Shenzhen, there were over 2000 Shanzhai Shouji companies at the peak around 2010. After the industry experienced selection pressure and sophistication, a number of brands born in the city have gained global popularity.

There are several standpoints regarding how to utilize intellectual property in development. One approach is to complete development within the company. On the other hand, another way to gain profits in the short term is by opening up the resources and involving many players.
The “only in-house” development model is suitable for intellectual property that is likely to be profitable over the long term. So, many chipmakers take this strategy.
The “open” model is appropriate for those that are difficult to obtain long-term profits in the first place. One of the reasons that software developers tend to adopt an open-source strategy is because the changes are so rapid that IP life is not very long. ICT devices manufactured around Shenzhen are mostly semiconductor-based, and due to Moore’s Law, price reductions and performance improvements occur at a faster pace. Unlike analog circuits and mechanisms, new SoCs are announced every year, updating the whole market, which cancels and overwrites some technological innovations.
It is true that China’s IP protections are still underdeveloped. There is no doubt that the country has a reputation as being forgery heaven. But it is also true that this ecosystem enables small and medium businesses to develop original hardware and spurs innovation as a whole. Andrew Bunnie Huang, an American who is familiar with Shenzhen hardware manufacturing, defines this system as “GongKai (disclosure)” saying, “It was formed in a different way from Western European open source, but has a similar effect.” In his book, “The Hardware Hacker” (published by Gijutsu-Hyohron in Japan), he explains the effect of the GongKai method: 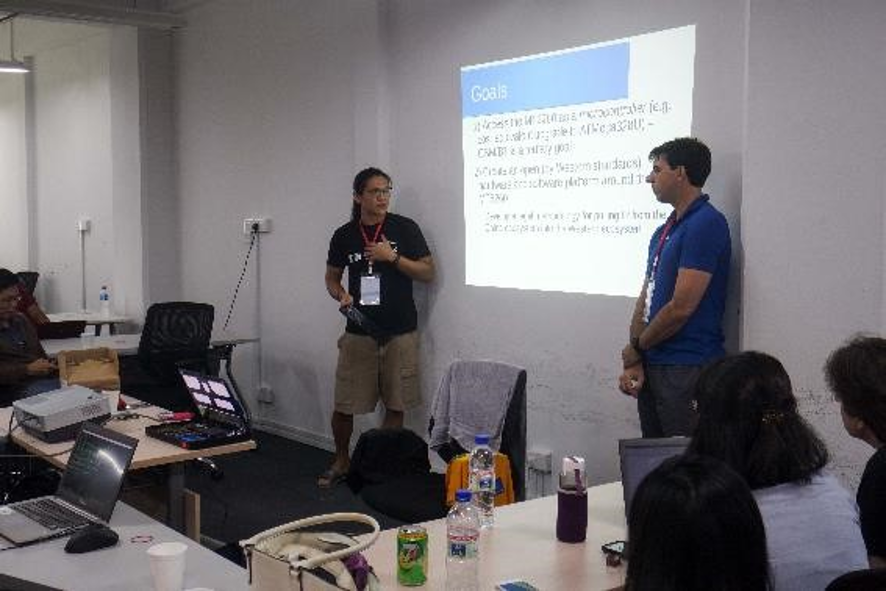 Bunnie Huang (middle of the photo), describing the project “fernvale” to re-implement the GongKai ecosystem in Shenzhen based on an open-source framework. He has developed many hardware in Shenzhen and also conducted mentorship programs for startups.

—
Here lies a key distinction between most Western innovators and their counterparts in Shenzhen: everyone who is anyone in Shenzhen owns or has close ties to a factory. The fastest path to material wealth is selling more products. Arguing over who has rights to abstract ideas is a waste of effort best left for baijiu-fueled discussions after dinner. On the opposite end of the spectrum are Western patent trolls, so removed from factories that they probably don’t even have a soldering iron, yet they invest millions of dollars into litigation and collecting royalties on ideas they did not invent.
Neither system is perfect, but the GongKai method is uniquely adapted to the fast pace of technology. In a world where chips get faster and cheaper every couple of years, a 20-year patent lifetime is an eternity. Spending a decade to bring a product to market simply is not an option; the best factories in China can turn a napkin sketch into a prototype in days and bring it to scale production in weeks. Long patent terms may be appropriate for markets like pharmaceuticals, but in fast-moving markets, investing months and tens of thousands of dollars in lawyers’ fees to negotiate a license or just apply for a patent can lead to missed opportunities.
—”The Hardware Hacker” by Andrew Bunnie Huang, translated by Masakazu Takasu, supervised by Hiroo Yamagata, published by Gijutsu-Hyohron

In fact, large companies such as Xiaomi and Huawei have brought about higher efficiency by entrusting the design of middle-range smartphones to these IDHs, while focusing their design resources on high-end products. With many new smartphone manufacturers like Oppo or Vivo rising from the Pearl River Delta, the IDHs play a role in encouraging new entry of those manufacturers. The majority of the current top 10 smartphone manufacturers in the world are centered in the Pearl River Delta. This imitation-based ecosystem is also the driver behind smartphone innovation.
Whether it is the game or motorcycle industry, the field where technology development is active produces many rival companies in the same region. They compete and develop through product benchmarking and mobility of human resources between companies, causing the entire industry to evolve. The smartphone industry in the Pearl River Delta may be a more extreme example of a massive investment in a short period of time.

It is a very interesting phenomenon that industrial accumulation spontaneously generates an IP sharing model. When it comes to China, gigantic unicorn companies tend to attract attention among people, but I am taking note of this ecosystem. Recently in Shenzhen, large corporations and R&D organizations around the world such as Airbus and MIT have begun to open labs aiming at such accumulated intellectual properties. I think this is a topic that Japanese engineers should also pay attention to.