Robots Are Leaving the Factory: Find Out How Cleaning Robots Work 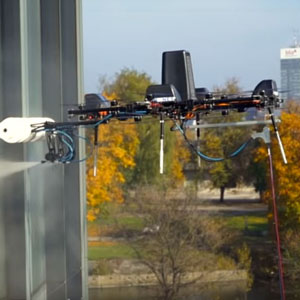 There are tens of thousands of large office buildings, apartment buildings, and other structures that need to be cleaned every week. The traditional approach exposes human cleaners to considerable danger. Each cleaning crew must secure to a cleaning platform, clean a segment, and then repeat the process. Throughout the cleaning day, fatigue and distraction are major concerns. In 2011, eight people died in skyscraper cleaning accidents in the United States alone. Fatal accidents in window washing have been recorded for years.

To reduce the likelihood of injury, window washers have responded by mandating higher training standards. Unionized window cleaners in New York are required to complete 800 hours of training. Unfortunately, many regions don’t have this kind of cleaning program. In addition to encouraging better training and equipment, cleaning robots have a role to play.

With more than $3 million in funding, Israel-based Skyline Robotics is aiming to deliver clean windows via robots. Ozmo, the cleaning robot, provides two benefits to end users. The robot increases productivity by only requiring one human operator on the ground instead of three at high altitude. Further, the robot uses a simple cleaning product to carry out cleaning, namely, distilled water. That means fewer equipment expenses for property managers.

Robotic arms with cleaning attachments are the fundamental robotic components of Ozmo. Each Ozmo has two robotic arms capable of a wide range of motion. It has points of articulation: one at the base and one midway through the arm. Based on photos of the company’s early prototypes, Skyline appears to be using Kuka robotic arms. Kuka already produces robotics for a variety of cleaning applications, including automotive cleaning for BMW.

While this cleaning robot does have machine learning capabilities, it cannot function from scratch. Users need to load a 3D building model to the robot to get it started. With that data in place, the robot builds a cleaning algorithm to cover each part of the building.

At this time, the company hasn’t released detailed specifications on the robot itself or the components inside it. Given the company is a young startup, it’s too soon to tell what will happen to its technology.

What Other Hardware Could Cleaning Robots Use?

Robotic arms aren’t the only way to create cleaning robots. Aerones, a startup company based in Latvia, is taking an entirely different approach to cleaning robots: cleaning drones! Robotic arm-style cleaning robots can cover much ground. However, they require infrastructure in the form of a support platform. What if you need to clean a different kind of structure or have hard-to-reach areas on a skyscraper?

Equipped with 28 propellers, Aerones’ cleaning drones will be able to fly to a height of 1,148 feet or 106 stories. At this stage, the company sees three main uses for its drones. It can be used to maintain wind turbines; there are over 4,100 of them in Europe alone. It can also be used for building cleaning and firefighting. Unlike almost all drones in use, Aerones have a different power solution: they’re tethered to the ground for power. Thus, the usual drone flight time limitations don’t apply to this device.

Due to its design and power supply, the Aerones drone has significant carrying capacity of up to 440 pounds. As a cleaning robot, the Aerones can carry a large amount of pressurized water to clean buildings or blast ice away. Further, this cleaning robot can be supplied with cleaning liquid through its ground tether, if that’s necessary. With added life capacity, the drone has been used for other purposes besides cleaning. In May 2017, the Aerones drone was used for a 1,000-foot base jumping event by Ingus Augstkalns in Latvia. This drone-assisted base jump is believed to be the first such jump in world history. Perhaps this cleaning drone will usher in a new drone hobby: drone jumping!

Aside from cleaning and jumping, what else can you use drones for? You can use drones to create 3D maps. The best part is that commercial drones on the market right now are suited for this hobby.

What about small cleaning robots such as the Roomba? These wheel-based robots have been around for years. As a result, they’re relatively mature in terms of technology and accessible in terms of price (most range between $200 and $700). These robot vacuum cleaners have substantial battery life. A PC Mag review found that two robot vacuums have a tested battery life over two hours. In terms of technology, laser navigation is a popular option. Most robot vacuums also give the end user control or monitoring by smartphone.

What May Happen in the Future of Cleaning Robots

Cleaning is tedious, repetitive, and in the case of skyscrapers, dangerous. That’s why cleaning robots are going to increase in popularity. By using machine learning to improve navigation, the latest generation of robots doesn’t have to be controlled constantly. While most cleaning robots are controlled to some degree, we predict that fully or partially autonomous cleaning robots will become standard in the next 10 years.