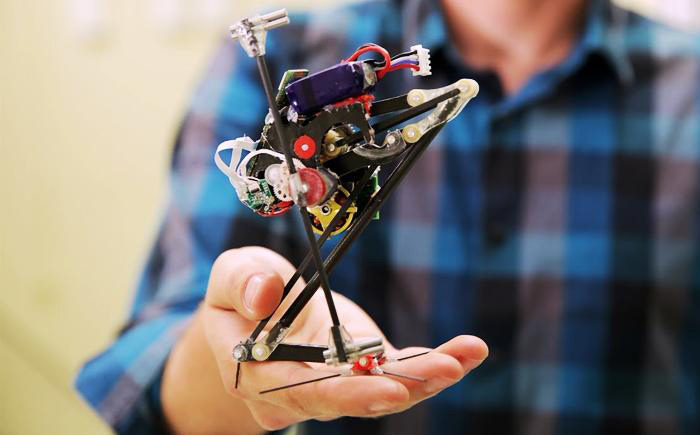 A jumping robot created at UC Berkeley can vertically jump higher than most average humans and also jump using walls, bouncing off from one side to another platform. Its name, SALTO, could not be more fitting as it stands for saltatorial locomotion on terrain obstacles. Salto also means “jumping” in Latin.

Duncan Haldane, a robotics Ph.D. Candidate at UC Berkeley, and the team have built the robot with search and rescue in mind after visiting the FEMA Urban Search and Rescue Training Site in Menlo Park, CA. Small and light-weighed, Salto will be able to alleviate the challenges and hardships of searching the rubble for signs of life after the destruction of buildings in unfortunate events such earthquakes, fires, etc.

In the process of building the robot, the team published a study with the objective of evaluating a robotic series-elastic actuator with a mechanical advantage adaptation as a principle for increasing robotic vertical jumping agility. Previous work has shown that an adaptation of mechanical advantage (MA), which is defined as the ratio between the reaction force at the foot to the force applied by the actuator, could increase the energy that a series-elastic muscle-tendon complex can deliver. SALTO utilizes robotic series-elastic actuator with an MA adaptation (SE+MA) which has been shown to improve vertical jumping agility by preserving energy and delivering more power needed for effective, higher jump. 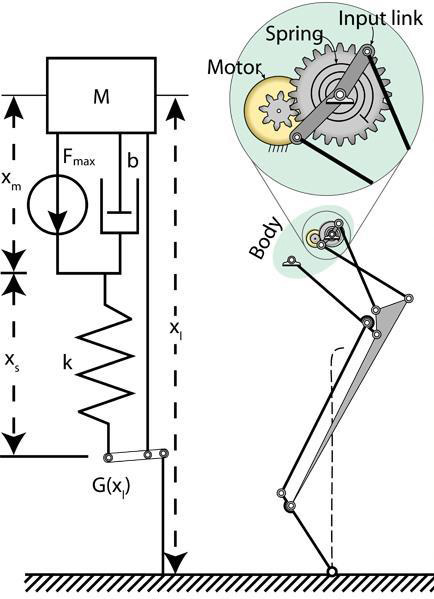 Figure 1. Power modulation of Salto; a power-modulating system model (SE+MA) is shown on the left and schematic of the robotic mechanism is shown on the right. / ©Haldane et al., 2016

Haldane developed the model for Salto from studying the animal kingdom. Animals through natural selection have developed special abilities when it comes to a mechanism for fleeing from their predators. One specific type of animal that caught Haldane’s attention was Galagos, nocturnal primates that can jump up to 5 times in less than 4 seconds. These animals engage in a crouching motion before the jump. The highest vertical jumping agility of the galago was 2.2 m/s, and Salto has an agility of 1.75 m/s which beats the record of the previously most agile robot (1.12 m/s).

The act of crouching helps store energy in their tendons, which then allows achieving better jumping result. The longer they sit, the more energy they save. This conversion of potential energy to kinetic energy through such behavior is known as power modulation. It is an adaptation found in natural systems, also known as power amplification in biomechanics literature.

Constructed with the newly developed metric of jumping that was designed for both animal and robotic systems and simple calculation, Salto demonstrates unprecedented agility. Haldane and the team describe the vertical jumping agility as “the height that a system can reach with a single jump in Earth gravity, multiplied by the frequency at which that jump can be made.” Vertical locomotion such as climbing or flapping can be explained the following equation:

where h = jump height; tstance = total stance time from the onset of actuation; and tapogee = flight time from when the jumper leaves the ground until it reaches the highest point of a jump (when the vertical velocity is zero).

Since the gravitation force is taken into consideration, the vertical jumping agility is limited to its power-to-weight ratio, and it describes “how much and how quickly an animal can change its energetic state” without considering changes of directions or turning behaviors. 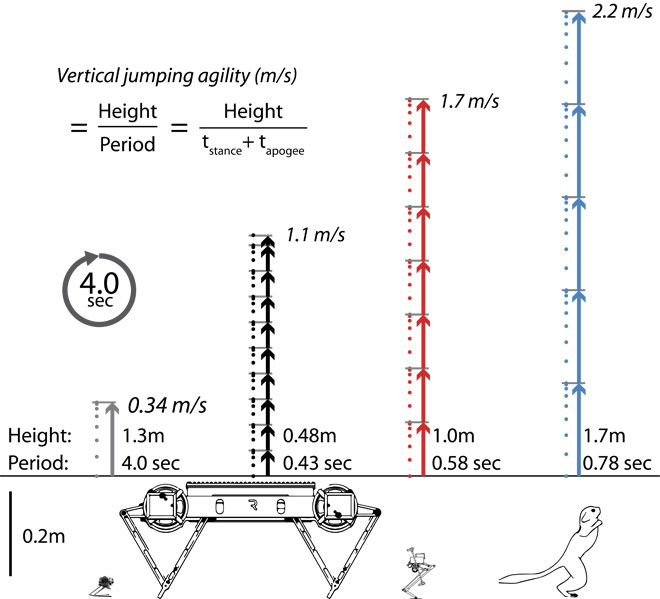 Figure 2. (Left to right) A series of repeated vertical jumps made by the most agile systems over an interval of 4 seconds: parallel-elastic (EPFL Jumper), rigid (Minitaur), series-elastic power-modulating (SALTO), and Lesser galago (Galago senegalensis). Each arrow denotes a single jump. / ©Haldane et al., 2016

Haldane was able to incorporate the mechanism into robotics by using a motor that drives a spring, which loads via a leg mechanism to create the kind of crouch seen in the galago. Through this, Salto is able to reach a height that is greater than what it can achieve from a single jump.

Salto is one-legged and comprises of a linkage that enables power modulation, a series-elastic actuator, and an inertial tail for attitude control. Weighing just 100 grams (3.5 ounces), Salto is 26 centimeters (10.2 inches) tall when fully extended and has the vertical jumping agility of 78% of a galago. While there are other robots that can jump higher than Salto in a single leap, Salto is still the most vertically agile robot existing.

The control board is able to measure body angle, leg position, and motor position at 1000 Hz and is controlled from a laptop via an onboard ZigBee. Two independent linear feedback laws are incorporated: “a proportional controller on motor position and a proportional-derivative controller on body angle.” A single axis onboard gyroscope is used to estimate body angle. The controller for the wall jump is implemented as a state machine. The controller, when initiated, sets the pitch setpoint forward to angle the robot toward the wall. Leg extension is triggered and the robot jumps when the pitch angle reaches a certain threshold. The robot retracts its leg in the air, and the pitch setpoint is set to the angle at which the robot should contact the wall.

The team did multiple experiments to determine the maximum height gain that the robot could achieve and the vertical jumping agility such as wall jump for the context of locomotion. For the vertical jumping tests, they placed the robot on the floor with the center of mass directly above the foot and then applied a step input that drove the jumping linkage to full extension. The tail was not activated for these trials to prevent controlled landing.

Then they were able to show a wall jump where the robot started from the floor to jump toward the wall, and the jumping off the wall, all the while using its tail to orient itself.

The wall in these experiments was a 0.25-inch-thick acrylic plate mounted to an extruded aluminum frame. To increase traction, a 0.175-m diameter of 0.25-inch-thick polyurethane rubber was added 0.88 m above the floor, where the robot’s foot was expected to make contact.

The mechanics is inspired from biology and it will inspire more people. The team wants to keep exploring new behaviors, utilizing human parkour as the closest model. Also known as free-running people, they use movements off things that otherwise would be an obstacle like walls, stairs, or gap in between buildings. The team wants to try to do extended behaviors that result in series of jumps to get to places people weren’t able to before.