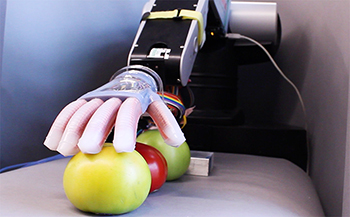 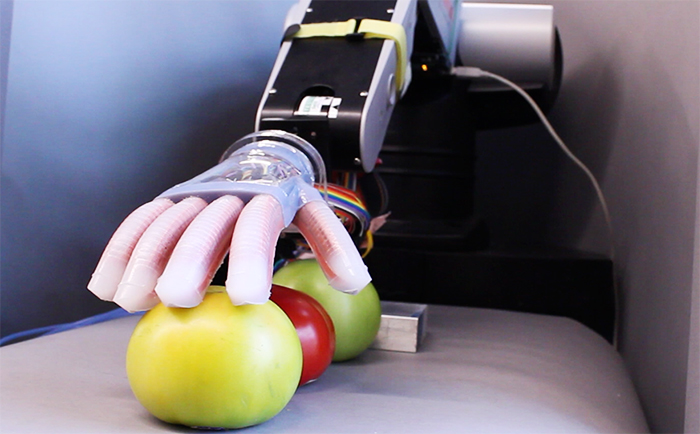 A soft robotic, prosthetic hand that has a human-like sense of touch has opened the door to new advancements in the field of prosthetics. Our hands are very critical parts of the body that we use to engage in everything. Not only do they have the function of touching, grasping and grabbing, but also they have sensory receptors that are very sensitive at our fingertips and are interconnected to other parts of our body.

A research team from Cornell University, led by Robert Shepherd, an assistant professor of mechanical and aerospace engineering and principal investigator of Organic Robotics Lab (ORL), has created a prosthetic hand with photonic strain sensors that can do similar things as human hands. It can move each finger, touch, and feel things internally.

When we think about robots today, they are generally rigid and made of metal, with sensors usually located outside of the body. However, this particular robotic hand is soft and sensitive. “Our sensors are integrated within the body, so they can actually detect forces being transmitted through the thickness of the robot, a lot like we and all organisms do when we feel pain, for example,” said Zhao.

The project objective is to prove that optical sensors can be integrated into soft actuators and provide high-quality sensory capabilities. These elastomeric optical waveguides are highly stretchable, chemically stable, and easy to fabricate and exhibit high precision in signal output.

The prosthetic hand, composed of four actuated soft fingers (at ΔP = 100 kPa) and a thumb, is mounted on a rigid 3D printed palm. They used 3D printing and soft lithography as the fabrication method because of the design freedom and proven ability to reproduce shapes in soft materials with high precision that these techniques allow. 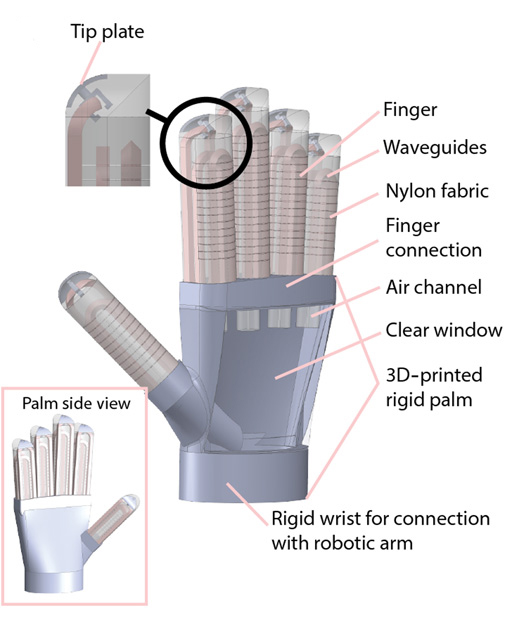 The fingertips are made of a hollow silicone tube measuring 18 mm in outer diameter. The four fingers are pneumatically operated. As compressed air enters through the hollow tube, the inflation pressure triggers the fingers to perform hand movements. Each finger of the prosthetic hand is designed to be soft to make use of their intrinsic compliance so that they can implement most of their experiments by open-loop control. The soft actuators allow external forces to transmit to the internal structure and embedded sensors. A tip plate, which transmits external tip force directly to the waveguide, was integrated at the fingertips in contact with the waveguide to improve haptic sensitivity. 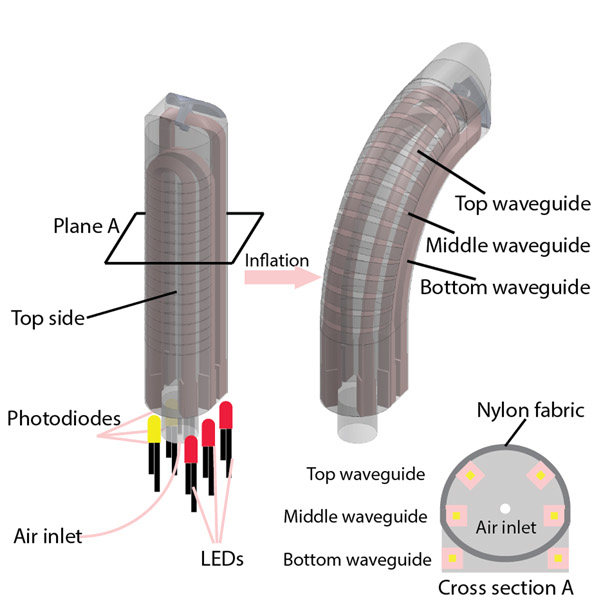 Each individual finger is made of nylon fabric with slits allowing circumferential stretching for actuation. The photo strain sensors were embedded into the actuators and three waveguides (U-shaped; top, middle, and bottom) into each finger. The sensors embedded in the finger use optics to convey information about pressure, texture, and position.

Elastomeric waveguides, which are hollow tubes that guide electromagnetic waves, are fabricated using transparent polyurethane rubbers. As light propagates through the tubes, the light dissipates and more light is lost as it is deformed. The amount of light loss of the tubes is measured using a photodetector. The hand uses these light signals to collect data of what the hand is touching, as the waveguides bend, distort, or change the light signals in the process. The stretchable waveguides were fabricated using soft lithography process and each waveguide houses an LED and photodiode.

The following video demonstrates the functions of three individual waveguides (in one finger):

The team performed three tests that were inspired by common tasks of the human hand. They include detecting shape and texture, probing softness, and object recognition.

The most commonly used exploratory procedure for detecting the roughness and shape of a surface by a human hand is lateral scanning. The team used their robotic arm to guide the hand to conduct lateral scans at a fixed height over multiple surfaces to distinguish their shape and texture. They tested the ability of the fingers to topographically map seven different 3D-printed surfaces using the method. And, they were able to observe that the hand could distinguish curves as small as 5 m-1 and roughness on the order of 100 μm.

In this test for softness detection, the hand measured softness of five materials and objects: acrylic, polyurethane sponge, silicone rubber, a ripe tomato, and an unripe tomato. The tip of an actuator had to be barely touching the top of the object in order to read tip force and the degree of bending, as well as varying internal pressures, which were indicated by the bottom waveguide power loss and the top waveguide power loss, respectively.

Varying the stiffness of the finger via the internal pressure also helps to generate a stress-strain curve for each of the materials. “The loss in the bottom waveguide is proportional to the contact force (thus stress) on the subject, whereas the loss in the top waveguide is proportional to its deformation (thus strain).” The team measured four states for each object and was able to compare them by fitting them into a linear curve.

The group tested object recognition by asking the robotic hand to pick the ripest tomato out of three. In this demonstration, they combined shape and softness measurement to carry out the test. First, they used their lateral scanning, shape reconstruction method to figure out the shape and location of the tomatoes. Then, the hand used its index finger to measure softness by determining the output signal from the tomatoes. The ripest tomato showed the largest top waveguide loss and smallest bottom waveguide loss. Just like we would in a supermarket, the hand gently pressed on everyone and found the softest one.

This soft prosthetic hand with rich sensation is a product of combination and extension of several areas in both material science and robotics: 3D printing, soft lithography, and soft robotics. These innovations have allowed excellent precision and stretchability. The team also emphasizes the ease of fabrication and chemical compatibility of the prosthesis. In addition, the field of robotics will benefit from high repeatability of the developed stretchable waveguide sensors.

There are still many aspects for improvement for the prototype. According to the researchers, sensory density for proprioception and exteroception can be increased by incorporating more sensors into the actuators or by replacing the body of the actuators. The haptic sensitivity can also be enhanced by using LEDs with a larger power range, high-power laser diodes, and by increasing the soft actuators’ pressure range (i.e. more pressure force).