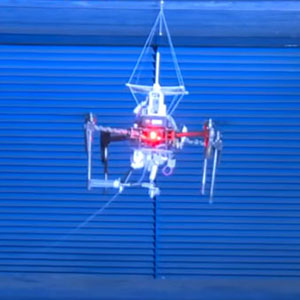 Using a modified DJI Matrice 100 drone, researchers at the Aerial Robotics Laboratory of the U.K.’s Imperial College London developed a proof of concept for a new perching technology that was presented in late 2017 at the Intelligent Robots and Systems (IROS) conference in Vancouver.

Modeled off of a spiderweb support structure, the modular additions of the SpiderMAV are capable of launching spider-like threads to secure an airborne drone to nearby surfaces.

Why is the Perching Function Valuable?

For a drone, maintaining flight stabilization during variable wind speeds is a difficult task that requires lots of energy from the high-processing algorithms. While saving power would not typically be seen as a thrilling point of research, Mirko Kovač, PhD, explains it this way: “One of the main challenges for aerial robotics is the high-energy consumption of powered flight, which limits flight times to typically only tens of minutes for systems below 2 kg [or 4.4 lbs.] in weight.” Extending flight times is certainly something of tremendous value to today’s drone technology, and to future possibilities of flying robots.

In addition to the energy gains of perching, the technology also has the potential benefit of creating stability and precision in the drone’s mid-air positioning. The variable effects of wind are not conducive to a drone that is used for sensing, inspecting, or photography.

Another value of perching is to allow drone robots to be more autonomous in hazardous or unsafe conditions. “One core application area is in deep mines, where we can imagine having drones operating in mines doing mapping tasks, sampling tasks and also looking at where the precious metals are,” said Kovač.

Researchers are also considering how flying robots could be capable of additive manufacturing such as 3D printing or ad-hoc construction to repair damaged surfaces. This type of robot drone technology would only be possible if first a perching function offers both flight stability and energy efficiency.

Near-future potential applications include jostle-free camera shots in variable weather conditions such as the heavy winds during a storm. While we don’t recommend flying your drone in high winds, the below video explains some of the considerations for drones that are navigating high wind situations.

How Does the SpiderMAV Perch?

The modules use compressed gas to launch a magnet with an attached polystyrene thread. After the magnet is secured to a magnetic surface such as a beam or metal sheeting, the actuated spooling system reels the thread in so that it is a taut line. After the drone is secured, it can then slow down its motors or shut them off entirely.

With “spider” in the name of the device, it’s obvious where the researchers were taking their inspiration.

The particular spider that inspired the SpiderMAV is the Darwin’s bark spider. In this video showing the spider in action, you can see how the spider sprays silk threads that are then woven by the wind to create an anchor line that spans 82 feet. The research team took inspiration from the animal’s ability to manufacture a thread that’s strong enough to become a support structure.

But researchers at Imperial College London are using bioinspiration as a core function for many of their designs. “The heart of successful bioinspired design is the abstraction of the underlying design principles found in biology and their implementation in robotics using state-of-the-art technology,” says Kovač.

Of course, nature-inspired technology is nothing new. Flying robots examples include the Bat Bot, and here is a set of six hexapod robots that are inspired by animals.

As yet, the SpiderMAV is still a proof of concept that demonstrates the immediate gains from doing additional research on this functionality. While the securing mechanism has a prototype, researchers have not yet investigated how the SpiderMAV will disengage from its perch, an essential part of having a fully-functional module.

Additionally, the research team is working on different anchoring systems beyond magnetics. While magnetics are highly effective for metal surfaces, for the anchoring function to be effective in a real world scenario, it needs to accommodate materials other than metal.

In an illustration of how this technology of manufacturing anchor lines could be used for robot drones, the robotics team visualized two drones working together to weave a support web. “By doing that, the string itself acts as an intelligent structure that tangles itself to any geometry,” said Kovač. 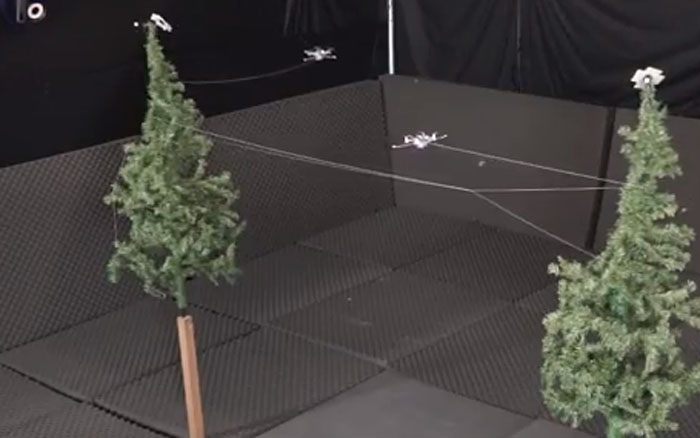