Surgeons, Lifting Patients Out of Bed, and Emotional Support: The Future of Healthcare Robotics 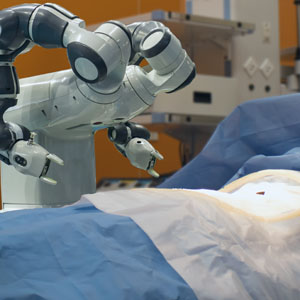 Delivering healthcare services is expensive, and it’s only going to get more expensive. In 2018, 27% of Japan’s population was over the age of 65. By 2050, experts estimate that 40% of Japan’s population will be senior citizens. Aging populations impact healthcare because older people tend to suffer from more illnesses and generally require more care. The constantly increasing health care costs have encouraged health experts to think creatively. Can healthcare robotics help?

Right now, there are healthcare robots in hospitals across the world. If you’re surprised, remember that robots need not be walking, talking droids from Star Wars. Instead, the most successful healthcare robots in hospitals tend to be fixed in place and perform a specialized function. For example, the da Vinci Robotic Surgical System is currently used by approximately 1,500 hospitals in the United States. A 2018 study of the system stated that “Our experience, based on 10,267 robotic surgeries performed at our hospital, indicates that the system has high reliability and a low incidence of malfunction, failure, and mortality. Therefore, robotic surgery can be considered a safe alternative to conventional surgery.”

This kind of surgery robot will help cut costs because these devices generally practice minimally invasive methods, meaning patients can recover much quicker and with fewer complications. Unfortunately, surgery robots don’t come cheap, so they may not help much with reducing healthcare costs in the short term. Currently, da Vinci robots cost approximately $2 million each. If the cost of these devices falls, it may become more common.

Healthcare Robots to Keep You Exercising in Your Golden Years

Treating elderly people in the hospital is just one part of the elder care story. For most people, receiving treatment and care at home is much more common. For example, elderly patients with limited mobility may be able to live at home with occasional assistance. CNBC reported that the demand for home health care workers currently exceeds the supply. That’s where robots may make a difference.

The Pepper robot, which has a humanoid design, shows one possibility in healthcare robotics. Developed by SoftBank Robotics, this robot has been used to guide the elderly through exercises. The robot is capable of interacting in 15 languages, including English, French, Spanish, German, Italian, Arabic, and Dutch. For patients with chronic conditions, regular monitoring by a Pepper robot could be quite valuable. Technically, there’s one notable limitation to this robot: it uses wheels for transportation, so homes with stairs could pose a significant barrier.

Robots to Help You Get Out of Bed 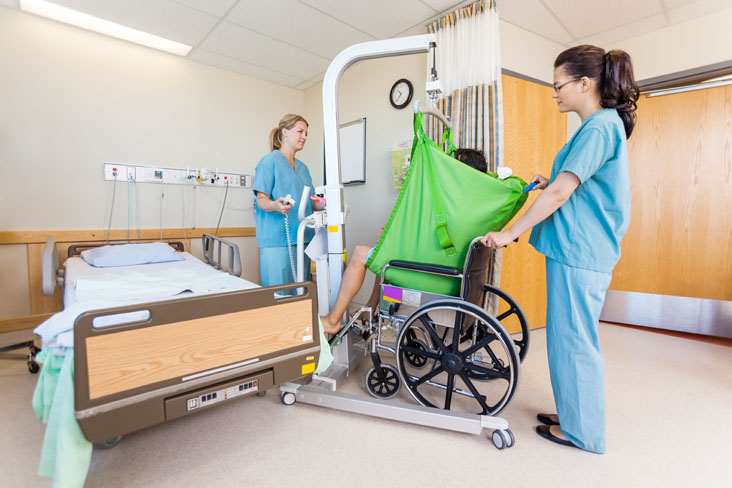 Elder care and sky-high obesity rates combine to pose quite a challenge. Currently, nurses and personal care workers struggle with the physical work of helping overweight elderly individuals. Weighing in at 300 pounds, the ROBEAR is built to solve this senior care challenge. It can lift people out of wheelchairs, beds, and other places. By taking care of the labor of moving people, this type of robot could go a long way toward supplementing the work people do.

Surgery, exercise, and movement in healthcare robotics all address the physical labor benefits of robots. It turns out that robots and AI may be able to help with psychological and emotional needs as well.

When you imagine an emotional interaction with a robot, you probably think of sci-fi movies with a human-robot romantic twist. Well, robots can address psychological health needs without the romantic element. Consider the WoeBot, an AI chatbot available through Facebook. It uses therapeutic techniques to help people cope with their needs. It has over a million conversations per week with users, suggesting that many people find interacting with the AI worthwhile.

Sony is taking the idea of emotionally aware robots even further. Inspired by dogs, Aibo is designed to offer company and play time to its owners. First released in 1999, the Aibo is significant because it’s a robot that’s been steadily refined and improved over the years. From a healthcare robotics perspective, the Aibo is promising for a few reasons. With a price tag of just $3,000, it’s affordable. By giving its owners a sense of play, Aibo may help ease the feelings of loneliness and depression, which have been shown to cause mental health problems in the elderly. If the device were networked with healthcare monitoring devices, Aibo might be able to alert your doctor if you fall and need help. That’s a significant step up from Fido barking to summon help.

Lifting heavy objects is nothing new in robotics. The M-2000 robot, designed for heavy manufacturing and automotive use, can lift more than 2 tons. In comparison, carrying a single person of any size isn’t a challenge for robots in terms of weight. However, safety and comfort expectations mean that standard industrial robots won’t work in the home. If sheer mechanical power in robots isn’t the limiting factor, what’s holding back robot hardware from mass use in the home?

For robots to succeed in senior care and health care, they’ll need to combine strength with significant sensor capabilities and processing. For example, a robot will need pressure, temperature, and sound sensors to detect problems when a person is being moved. Fortunately, the booming Internet of Things sensor trend in hardware will go a long way toward solving this problem. For example, wearable personal security technology has the ability to detect threats. Technology such as GPS and biometrics can be used to detect senior care need situations such as when a senior with dementia gets up to walk around in the middle of the night. This hardware trend has the potential to reduce expenses and improve the consistency of senior care.

The Prediction for Robots in Senior Care

Cost and safety will remain major considerations for healthcare robotics. In the end, small, inexpensive robots with health monitoring capabilities will take off. In the long run, healthcare robots that take care of heavy lifting and more involved needs may take off with supervision. Mass adoption will probably only occur when there’s effective human oversight.