These Hardware Devices May Bring Robot Taxi To The World 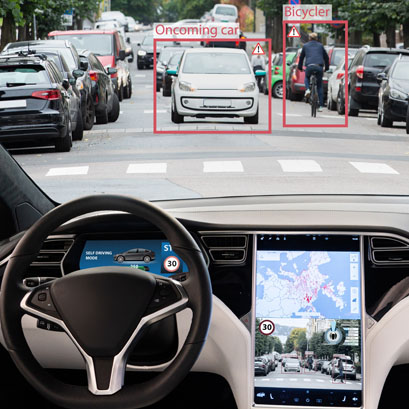 Over the past decade, we’ve seen a significant change in the taxi industry. Companies like Uber and Lyft have used apps to connect passengers with on-demand taxi service. Thanks to Tesla, the taxi industry may be about to change much more dramatically very soon. Robot taxi technology might be here sooner than you would ever guess.

Companies like Google and Tesla have tested self-driving car technology for years. Yet these technologies are still far from widespread adoption. That’s why Elon Musk’s recent robot taxi announcement is so exciting.

In April 2020, Musk stated the following on Twitter in response to a question about timing for deploying robot taxis:

“Functionality still looking good for this year. Regulatory approval is the big unknown.”

At first, this may seem unbelievable. Self-driving car experiments have been going on for years, and suddenly we’re less than a year away from seeing robot taxis on the streets? To get the real story, let’s take a closer look at both the technology and regulatory aspects of robot taxis.

The Hardware and Software That Make Tesla’s Robot Taxis Possible

Like other technical breakthroughs, Tesla’s robot taxi is made up of multiple technologies working in concert. On the hardware front, Tesla’s technology includes the following types of components:

To protect its technical advantage, Tesla is unlikely to disclose all of the specific hardware it uses publicly. For example, we don’t know for sure whether or not its vehicles use geomagnetic sensors. This type of sensor may be helpful to detect possible collisions and prevent them.

As mentioned above, there are significant unknowns regarding robot taxis. At this time, there is no clear indication which governments, if any, will approve licenses for robot taxis. However, there are different ways to approach this challenge. For example, consider a hybrid solution where a robot taxi is combined with a human taxi driver to monitor the system. In this manner, governments may feel more comfortable because there is a clear human operator to hold accountable in the event of an accident.

Alternatively, government regulators may take inspiration from the drone industry. Some drones are piloted remotely, while others have autonomous capabilities. Transferring the remote operator model to the robot taxi field may reduce concerns about accidents and accountability.

Finally, liability and insurance questions are the big problems that need to be solved before robot taxis can take off. What happens if a robot taxi encounters an accident? Would prosecutors direct their attention to the owner of the vehicle or somebody else? Further, how would automotive insurance providers treat robot taxis? If insurers consider robot taxis to be high risk, there may be very high insurance prices to pay.

What Are The Alternatives To Robot Taxis?

Given the unresolved concerns associated with robot taxis, what are other ways to use technology to improve transportation needs? Here are a few ideas you can use to enhance driver safety, save time, and make life better.

Identify faster driving routes with a network of cameras

Today, many drivers rely on radio reports to learn about local traffic conditions. These radio updates tend to provide general information, such as describing an accident on a freeway. For a driver trying to get home, simply knowing about an accident doesn’t help that much. What if drivers were given access to a network of smart digital cameras that monitored traffic conditions? If this technology was combined with machine learning, you could receive personalized driving directions that update every second.

Driving a car safely through a weather storm is a challenging task. ABC News reports that “during precipitation, there is an increase of about 34% of the overall risk of a fatal car crash occurring.” Certain technologies may be able to help to reduce weather-related accidents. For example, consider adding radar systems to cars to detect obstacles and provide information about possible collision risk. In this way, car drivers would be closer to airline pilots who can fly safely by using instruments rather than relying exclusively on vision.

The Future For Robot Taxis Depends On Two Questions

There is considerable uncertainty clouding the future of robot taxi technology. Before this technology has a chance of mainstream adoption, two questions need to be solved. First, what regulatory solution provides an acceptable balance between public safety needs and liability and innovation? Second, robot taxi technology needs to show further evidence that their vehicles are as safe or safer than human taxi drivers. Once these issues are solved, we can expect a boom in robot taxi technology.