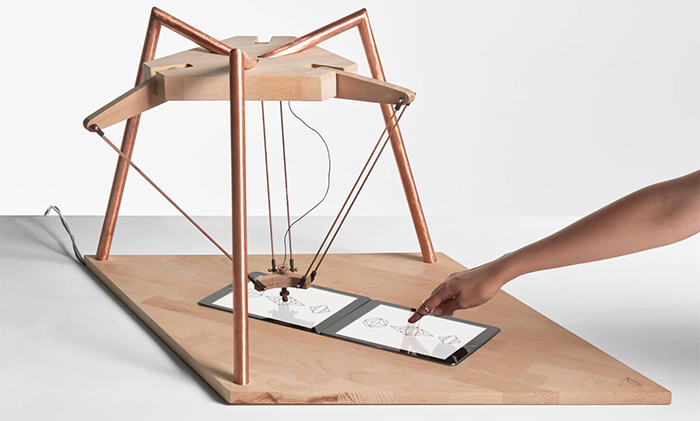 Robots with artificial intelligence are not new to the picture. However, unlike the cute, human-like ones that we might be more familiar with, this Delta robot named Deltu, has three legs and no face. Not your typical huggable robot, Deltu is not exactly afraid to show frustration when you do not perform well on the games.

Alexia Léchot, an interactive design student from Ecolé Cantonale d’Art de Lausanne (ECAL) in France, built Deltu as part of her bachelor’s project. This robot is a 3D machine, usually used in manufacturing factories for packing and moving. With added AI, Deltu and a human can engage in games through an application that Lechot created. Using two iPads that face each other, there are three games that operate based on mimicry. The first game is where a human draws something on their iPad and Deltu tries to interpret the image and draw it on his ipad. The second game involves a battle between the two participants. The third game is a memory game where a human has to learn the patterns that the robot proposes. When a human does not show good results, the robot will not want to play anymore. Instead, it would surf the Internet, take selfies, and post on social media like Instagram.

In an interview with Arduino, Alexia explained that the exploring and learning aspect of the engineering industry inspired her to build a robot. One that does not necessarily look like a human, because who said that they had to? Because the android’s place in society has not been yet been defined, there was much room for Alexia to experiment with her imagination.

Deltu is comprised mainly of wood and copper legs and also includes an Arduino Uno, 3 servo motor with metal gear, an Arduino Proto Shield, and a USB 2.0 cable. It’s software runs on two Unity applications. The application of the human from the iPad sends HTTP request to the computer. Then a Python server sends the string through the serial to the Arduino Uno. 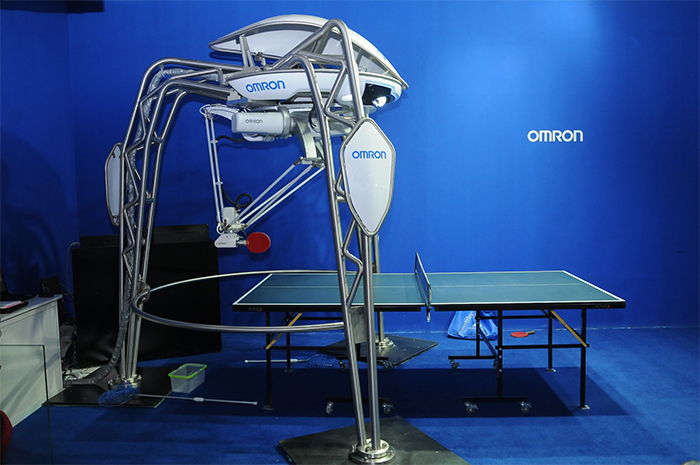 The OMRON Corporation is a company specializing in sensory and control technology within the field of automation. The technology is said to help “bring out people’s abilities.” Their robot named Forpheus —Also certified as the “first robot table tennis tutor” by Guinness World Records — uses an extremely precise control with a resolution of 1/1,000 of a second.

According to OMRON, it is an “experience-based demonstration of its vision of an evolution in the relationship between human and machine.” The company seeks to develop technologies that help create a richer society, creating a future of optimal “harmony” between human and machine. In this scenario, machines would enrich our experience with and assist people in making decisions for more creative lives.

Despite initial setbacks, developers were able to focus the sensor’s precision, always returning the ball in a way that is easy for the opponent to hit. Two cameras track the ball’s position and velocity. They then use its trajectory curvature and deceleration to estimate rotational speed. The robot makes an instantaneous analysis, even taking the Magnus Effect into account. It also recognizes the opponent’s standing and paddle positions to analyze the ball position in 3D and to predict its trajectory. With Omron’s proprietary prediction model, the robot has the precise rotation speed and real-time responses to accurately calculate trajectory, as it makes as many as 80 different calculations per second.

It also assists the human opponent by boosting human player motivation. It memorizes trajectories and considers the easiest location to hit the ball, for both the human and the robot itself. Depending on the human opponent’s level in the game, the robot can either speed up or make a softer hit.

Omron believes that this type of technology used in Forpheus can support human activity in workplaces. Through detection and prediction of location and movement of goods, with control of the movement itself and real-time information delivery, they can improve the working environment surrounding production processes in factories.

Mouser Electronics has released a project for their Empowering Innovation Together series, hosted by Grant Imahara, a former actor and engineer. They developed an Innovation Lab where different technologies are visited and new products are made. This time, they proved that some science fiction could actually be a technological reality. Is this a dream come true? Imahara decided to create the real-version of Ironman’s gauntlet while his opponent, Allen Pan, recreated the Captain America shield.

Mouser Senior Vice President of Marketing, Kevin Hess, said, “partnering with Marvel on their new series is a great way to keep future engineers engaged and excited about science, technology, engineering, and math – or STEM – education.” He believes that there is a need to continue to shape the next generation of innovators.

Iron Man’s Gauntlet:
First, Imahara used a 3D printer to print parts for Iron Man gauntlet, to which he attached the highest-powered laser that he could legally purchase. For it to be able to pop up, Imahara designed a custom mechanism that uses a micro servo. He used an ADP5054 DC/DC Converter from Analog Devices for a power converter with a small form factor. To connect all his systems, he used Molex’s UltraFit Power Connectors because of its small footprint and very high current carrying capability.

Captain America’s Shield:
Pan brilliantly built the shield on top of a drone so that it would fly and also return to its user. The shield also required a special glove that has an accelerometer that allows a transmitter to map his arm’s movement to the drone attached to the shield, which allows him to send the shield out and away from his body without a specific remote control.

The biggest challenge to Pan was making the shield fly. Having to sit on top of a drone, the shield had a weight budget, of 100 grams. The final result came out to be about 96 grams. Even the weight of the paints he used had to be calculated. Pan used Molex’s Temp-Flex cables and an Analog Devices accelerometer.

The battle consisted of three trials of popping a balloon only using their weapons. Imahara and Pan decided that it was a tie. While they are not exactly the same as the ones from the real hero movies, this was a very successful project that set a great starting point for further enhancement. 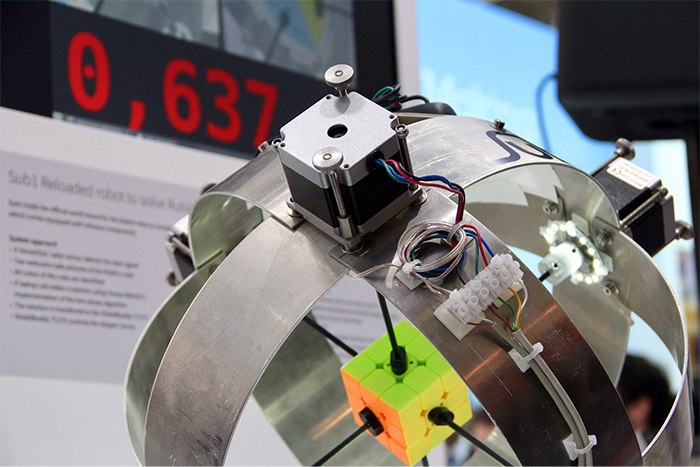 The Rubik’s cube has received consistent attention and praise, since its invention in 1974 by Hungarian Erno Rubik. A 14-year-old Lucas Etter surprised the world by solving the cube in less 4.9 seconds. Then, a Dutchman Mat Valks in January this year set a record of 4.74 seconds, which was then recorded in the Guinness World Records. While people have competed to solve the cube in the shortest amount of time, some people have moved into another area of competition, robotic Rubik’s cube solving. Just a couple of days after Valks’ record, German scientist Albert Beer built the robot “Sub1” that solved the cube in just 0.8876 seconds.

Sub1 contained 2 webcams which took pictures of the arrangement of the cube’s six sides, an Arduino-compatible microcontroller, and 6 stepper motors which rotated individual cube blocks. As soon as the start button is hit, the shutters from the 2 webcamscapture two pictures, each showing three sides of the cube. Then the colors of the cube are identified and a solution is sorted out using Herbert Kociemba’s Two-Phase Algorithm. It’s possible to solve the cube in just under 20 moves of the stepper motors.

Now Beer has created the robot “Sub1 Reloaded” that recently beat that record again at Electronica. This time, it took just 0.637 seconds.

“Sub1 Reloaded” was able to function like the body of humans with its added functions through various microchips. The machine took a picture of the cube to come up with the fastest and best solution and sent the commands to other parts acting as the muscles. In less than a second, the six motors from each side of the cube solved the puzzle.

While every Rubik’s cube can be cracked with just 20 movements, Albert Beer incorporated a few more moves to “Sub1 Reloaded” in hopes to acquire the best time possible.