What is a DIY Self-Driving AI Car, which Chris Anderson is Working on? 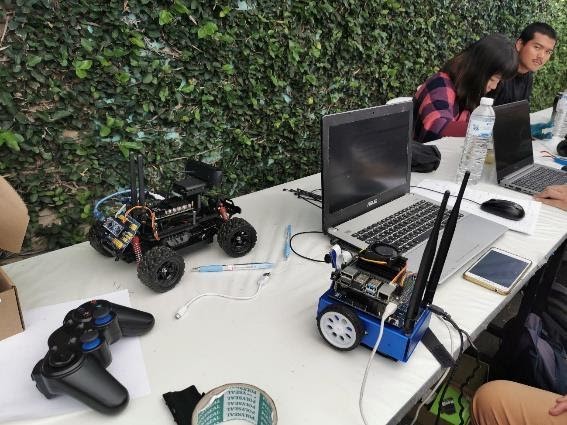 Chris Anderson, the author of “Makers: The New Industrial Revolution,” has introduced the Maker Movement to a wide audience. For the last few years, Anderson, who has published best-selling books like “Free: The Future of a Radical Price” and “The Long Tail,” that communicate the power of the Internet in a manner easy for business people to understand, has been working on DIY self-driving AI cars. 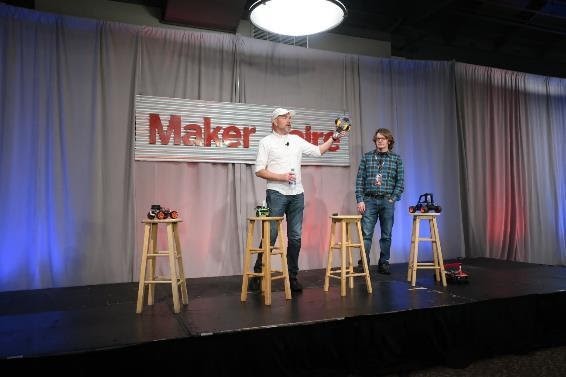 ■What is an open-source DIY self-driving AI car?

Although they are called self-driving cars, they are not large enough to carry people on public roads like the vehicles that the Google-affiliated Waymo or the Baidu group’s Apollo are developing.
They are about 30cm(about 12 inches) long and 1/16 size, like the radio-controlled cars that you often see, or even tinier machines made from smaller kits, and they run on courses a few meters long. 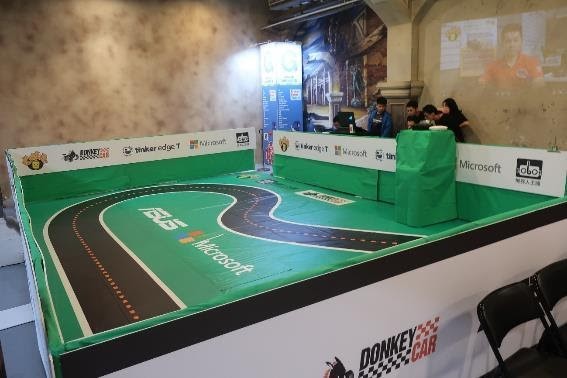 Test course at Maker Faire Taipei 2019. You can see supporting companies’ logos, like those of ASUS and Microsoft, as well as Donkey Car. DIY self-driving cars are becoming popular. 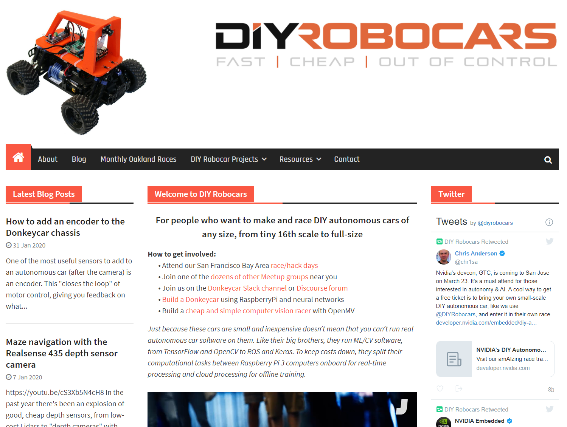 This is the DIY ROBOCARS website that Chris Anderson and others launched in 2016. It is a community of people who make their own open-source self-driving cars.

There are various competitions for DIY robot cars, such as micro mice, where a robot runs through a maze, or line tracers that run along a line drawn on the floor. The difference to those is that these cars are equipped with image recognition AI. Robot cars are equipped with high-performance microcomputer boards such as Raspberry Pi or Nvidia Jetson, and a machine-learning library such as Google TensorFlow, and make test runs of the course to acquire data for autonomous driving and are then run in the actual races.

The rule is that self-driving cars using machine learning/AI compete against each other. There are a variety of competitions for self-driving AI cars. Some of the races are purely software-focused, and impose rules such as all participants must use the same platform, like Nvidia’s Jetbot.

Those competitions tend to be complicated because image recognition-based AI plays a central role. Some races have road signs that change randomly during the course, and points are lost if the car doesn’t read them and change course accordingly. A self-driving car operated by well-trained AI runs as if it were being operated by a human: when it recognizes something that looks like a sign, it slows down to carefully read the sign and then accelerates again.

A self-driving car slows down to read signs while racing in the AI Robocar Race in Chiang Mai.

This means that the AI decides that it should reduce the speed until it can correctly read what appears to be a sign. That decision is based on the information that the camera reads via image recognition, and the differing parameters of the steering angle controlled by the servomotor, and the output of the drive motor, which is controlled by a standard (non-servo) motor.

■Why is it gaining popularity?

A self-driving AI car is an aggregate of multiple technologies.
Making a car that runs on AI and letting it operate on an actual course is highly effective as education and as R&D. Many large companies are making and running several test cars. As well as simulation via software and the research and development of each individual element, it is essential to apply the latest technologies experimentally and feedback those results. If you can make a car that in practice is of usable quality, it will have a large impact on society. That is why many laboratories have been developing cars for some time.
From around 2016 to 2017, AI-related technologies such as image recognition and machine learning have become quite cheap. Consequently, the research and development of self-driving AI cars is no longer limited to laboratories with abundant budgets and many professionals.
The Raspberry Pi or Nvidia Jetson microcomputer boards that are mounted on many DIY self-driving AI cars can be bought for about $100 or less, and cameras and other equipment can also cost less than a few tens of dollars. As the software-side has also evolved, image recognition and machine-learning frameworks are becoming feasible on such inexpensive hardware. 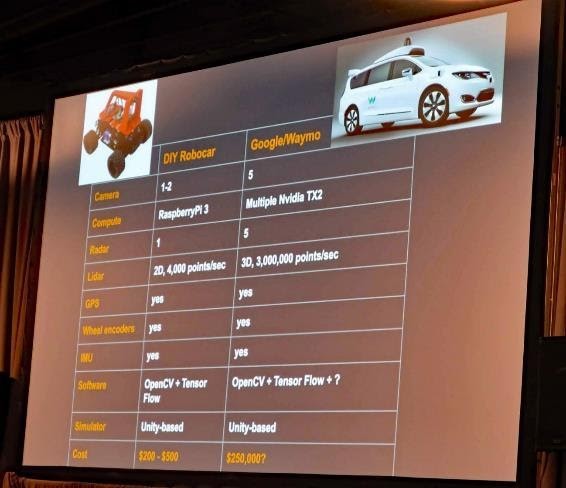 From Chris Anderson’s aforementioned presentation, a comparison of a self-driving car made by Google Waymo and a DIY robot car

Waymo’s self-driving car, which uses a real vehicle running on public roads, costs about $25,000 for the entire system, while a similarly configured DIY self-driving AI car using Raspberry Pi costs only about $200 to $500. Of course, reliability and individual specifications vary greatly. You can’t simply replace one of those vehicles with a DIY robot car. But the core software technologies are very similar. They are not completely different kettles of fish like radio-controlled cars and real automobiles are. The robot cars are more than adequate as a playtime or educational experience.

The democratization of these technologies has further advanced since Chris Anderson launched DIY ROBOCARS. The Raspberry Pi, shown in the table above, is a general-purpose computer that can perform various processes like a personal computer. The Nvidia Jetson Nano, released in March 2019, is an AI-specific single-board computer that can perform more advanced AI processing and it’s sold for about $100. More people have been attracted to the open-source initiative called Jetbot, which creates an AI self-driving car based on this Jetson Nano. Since it is open-source, you can make your own car body with a 3D printer, but companies such as Sparkfun also sell kits with JETBOT parts.
As more people have become involved in it, the internet-based community has gained knowledge. 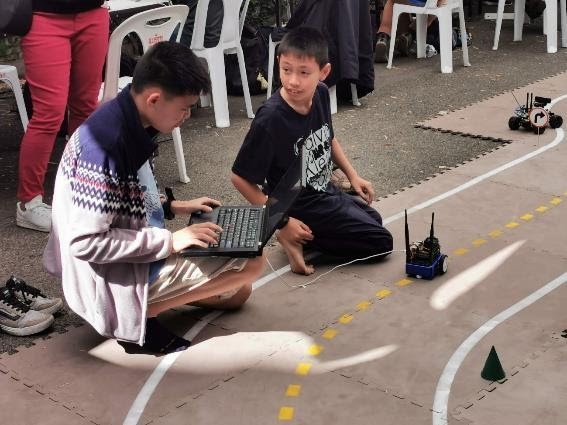 ■A community that spreads around the world

As the price and technology thresholds have fallen sufficiently, and continue to fall, involvement in DIY self-driving AI cars is rapidly growing.
I have participated in the one held most around the world, the Maker Faires, in various Asian locations. From 2019 to 2020, there were self-driving AI car races held in various places such as Tokyo, Taipei, Shenzhen, Chiang Mai, and Bangkok.
In each city, most cars that raced were based on Raspberry Pi or Jetson. But in 2019, cheaper RISC-V-based AI development boards emerged from China one after another. Such boards will also soon be incorporated into the communities, enabling them to build a self-driving car environment more easily.
To produce such an AI self-driving car, Hans, a German resident in Shenzhen, is seeking crowdfunding via Crowdsupply to develop the RoboHAT MM1, a motor driver board that controls the motor from Raspberry Pi. Servomotors and stepping motors can be controlled digitally from a microcomputer board, but for standard motors, because the current must be raised in an analog fashion to increase the output, they were harder to use in electronic works than servomotors. As the need has increased, development environments that reduce such hurdles have emerged from Shenzhen and many other areas. 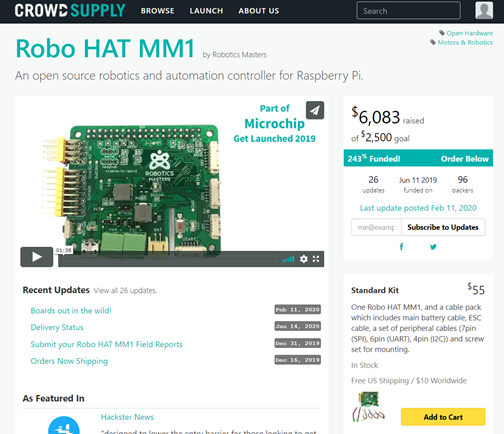 The development of self-driving cars that people can ride in, including their safety and reliability, will progress within the domain of specialists. However, there is still much potential for gadgets that can autonomously judge and move, like AI vacuum cleaners, which now exist as one product category.
As the development of these DIY AI robots spreads, those potentialities will increasingly expand.