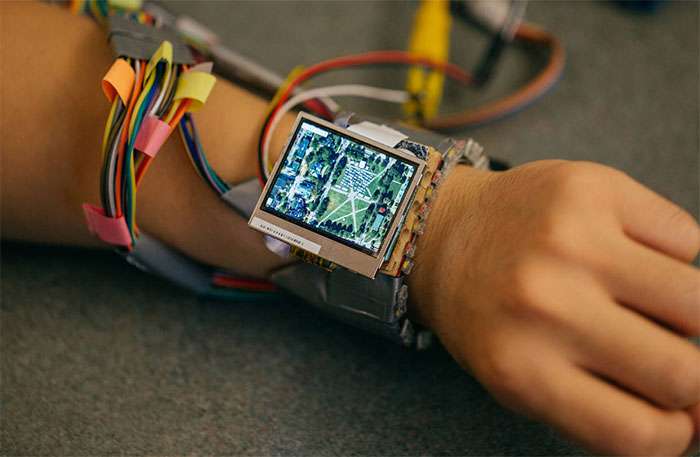 It’s time to free your hand! Researchers from Dartmouth College and Human-Computer Interaction (HCI) Lab at University of Manitoba have been developing a smart wristwatch which allows users perform touchscreen gestures without even touching the screen. Usually, interacting with smart devices requires both hands such as for flicking or swiping on the screen. Researchers saw this “opposite-side hand” operation very inconvenient especially when user’s hands are full. To obviate such inconvenience, they have looked into the possibility of a one-hand operational smart device and have created a prototype of a new type of smartwatch called WristWhirl. With this smartwatch, users can check emails, listen to music, track fitness activities, and do many other functions just by performing simple wrist movements.

Xing-Dong Yang, assistant professor of computer science at Dartmouth College, explained that research on one-handed gestures for smartwatches has been done in the past, however, the usability of the wrist’s joystick motion for input on smartwatches has not been widely explored as of yet. He said, “WristWhirl is the first to explore gestural input. Technology like ours shows what smartwatches may be able to do in the future, by allowing users to interact with the device using one hand (the one that the watch is worn on) while freeing up the other hand for other tasks” (Dartmouth Press).

So what does it mean by “wrist as joystick”? The wrist is one of the most flexible joints in the human. It can rotate in both directions. It can also bend forward and backward. This flexibility allows a wide range of motions that could be used to turn the wrist into a “joystick” for same-side hand operations on smartwatches.

In developing the prototype, researchers looked closely into the biomechanical properties of the wrist. A user study was done with 15 participants (right-handed) aged 15 to 20 years. To better understand the usability of the wrist’s joystick motions, they tested eight different types of gestures to control the smartwatch. These are called free-form shape gestures and they are shown below:

A number of factors were considered for the usability test of the prototype. Researchers included eyes-free gestures for input in case users are not able to directly look at the screen while performing the gestures. The eyes-free input can come in very handy during intense user activity. They also featured a position-control mode which enables the physical motion of the wrist to be mapped to actions on the screen. The position of the on-screen visual cues represent the direction and amount of the wrist bend. Gesture delimiter such as finger pinch was also considered. 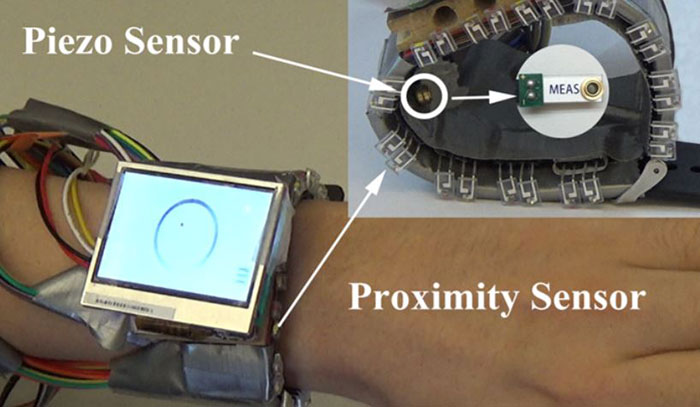 The WristWhirl includes a 2-inch TFT display and a plastic strap with built-in infrared sensor gap and piezoelectric vibration sensor. All these elements are located inside the strap. The data obtained by the sensor are processed by an Arduino DUE board.

WristWhirl is composed of a 2 in. TFT display and a plastic strap with 12 infrared proximity sensors, each including a pair of IR emitters and detectors (LITON LTE-301 & 302) and operating at 940nm with a maximum sensing distance of approx. 12 cm and a piezoelectric vibration sensor for finger pinch detection (Minisense 100) placed inside the wrist strap. The sensors were connected to Arduino

DUE first and then to a Lenovo ThinkPad x1 Carbon laptop (2.1GHz Intel Core i7 CPU 8GB RAM) to record sensor data (readings from 0 to 1023 with 1023 being the closest proximity) at a speed of 9600 Hz. To start a gesture, a user can pinch, which then turns on the proximity sensors to capture the wrist motion. When finished with the gesture, the user can pinch again which signals the end of the gesture and turns off the proximity sensors to save battery.

1. Gesture shortcuts: Similar to popular gestures search app, this shortcut app allows the user to open applications by performing gestures. For example, the user can open a calendar app by gesturing (or drawing) a triangle. The user can also gesture to speed dial a number (e.g. drawing “L” to call Lisa). 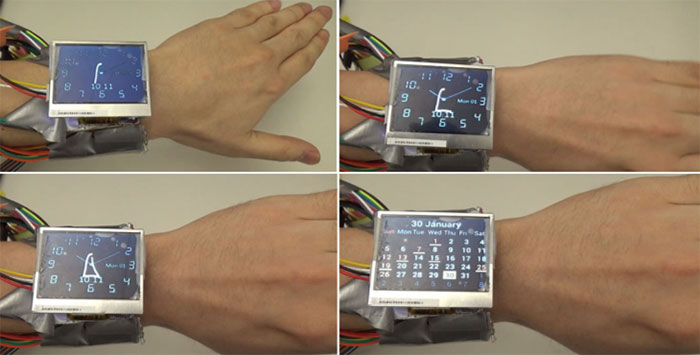 Preliminary prototype evaluation results showed that the free-form shape gestures were able to be recognized by a $1 gesture recognizer with an accuracy of 93.8%. The future research involves further improving the pinch detection, the proximity sensor to avoid interference from ambient light, exploring multi-touch gestures and supporting alternative designs for different wrist sizes.